OK, so the ROTF Constructicons weren't the smash hit everyone hoped they would be and, as good as they are, even the Legends set leave some unfulfilled. Perhaps the Power Core Combiners might give it a better attempt. They're gonna start out small, by offering Sledge first.

It was his deep loyalty to Megatron - and his deeper dedication to destruction and mayhem - that won Sledge the opportunity to upgrade his abilities through combination. His partner Throttler is a vile little creature every bit as mean as Sledge. 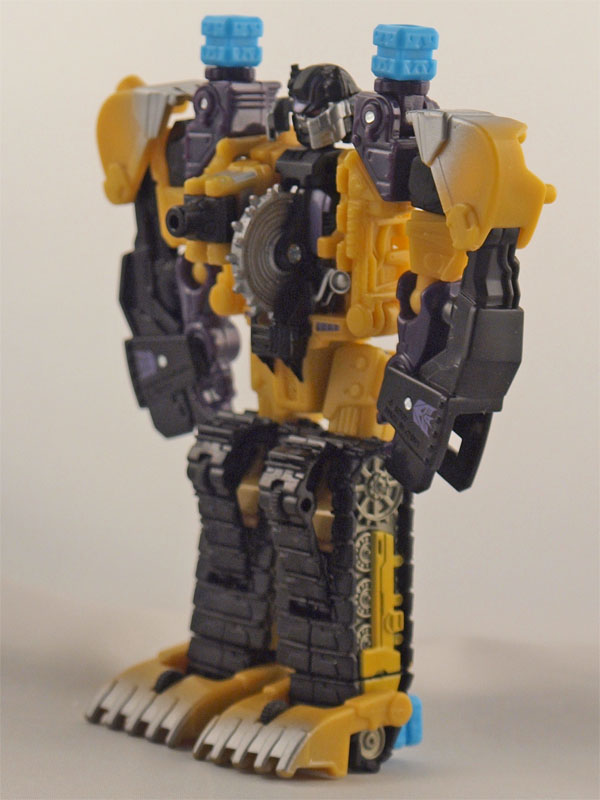 Sledge has a brawny robot mode. From the thick legs and the big footprint to the chopsaw in the middle of his chest, the whole "Don't mess with me" look is present. Even the head sculpt has a tough look to it. Just in case you don't get enough of a hint from just looking at him, there is also the pair of Decepticon logos found on his forearms. 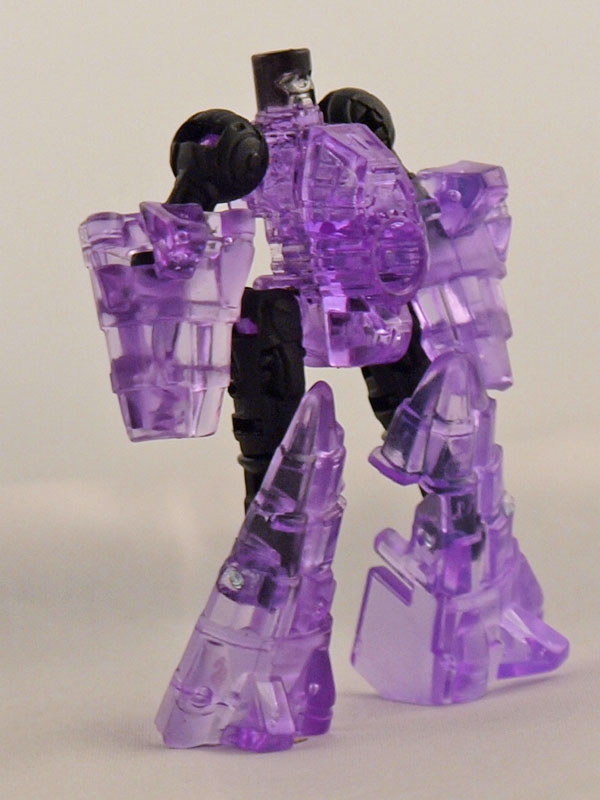 His minicon partner Throttler, however, looks somewhat silly. Maybe it's the purple paint job that doesn't make me take him so seriously. Then again, it could be his rather odd proportions. 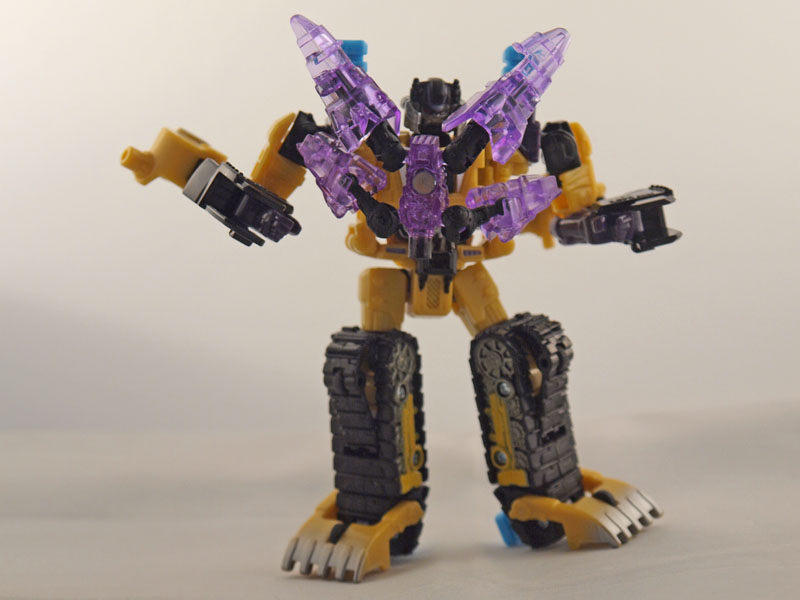 To transform Throttler into his chest armor mode, Fold the lower legs half-moon into the thighs. Rotate the arms so that the ball joints face the front. Spread out the legs and arms 45 degrees outwards. Push in Sledge's blade and open up the panel on the right side of his chest. This will expose the minicon port that Throttler links to. Not sure how well a spread eagle minicon works as chest armor, I'll just leave it at that. Please, refrain from the obvious. 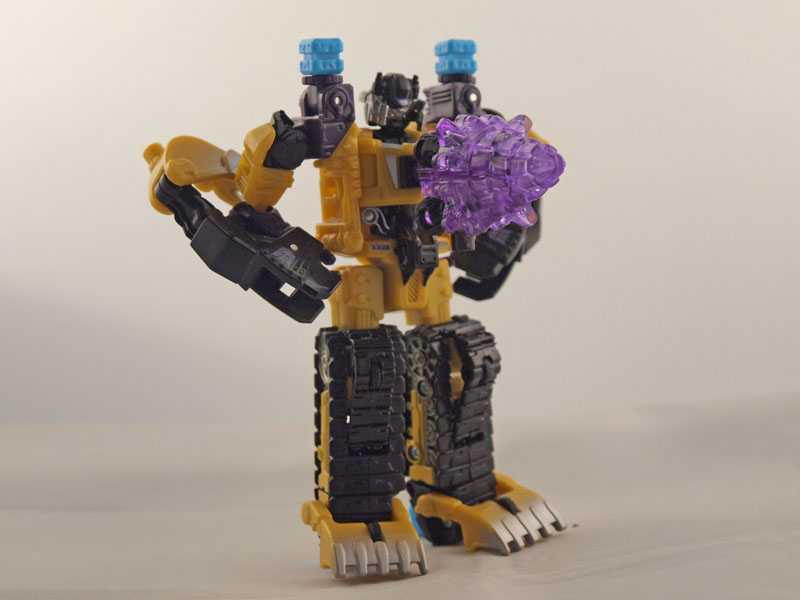 To convert Throttler into drill mode, Flip the legs into the thighs, then twist the legs 90 degrees outwards. Link the two legs together. Fold the legs behind him. Fold the arms back and position into the legs to form the drill bit. You can either attach the drill to Sledge's chest, or peg it to either of his shoulders for a 'drill ram' effect. For a plus, the minicon chest is on a rivet so you can simulate 'rotating' the drill.


You'll have to reposition the shovels on his arms to get full arm spread. Beyond that, good articulation.

Spread out both arms and flip over the shovels to conceal the hands. Fold in the plates alongside his head to conceal his face. Pull out the chopsaw from the back and rotate until the head is tucked into the chest. Fold in the hinged panel to conceal the head. Position the arms so that the upper arms point straight out and the lower arms/shovels have the Decepticon logos facing inward. Bend the legs back, but keep the knees straight. Grab the sides of the chest and pull the sides apart, where they will eventually sweep back and join each other. Be sure to peg the two shovel halves together. Fold the feet down and bend the knees to finish, noting where the combiner ports tuck into the body. 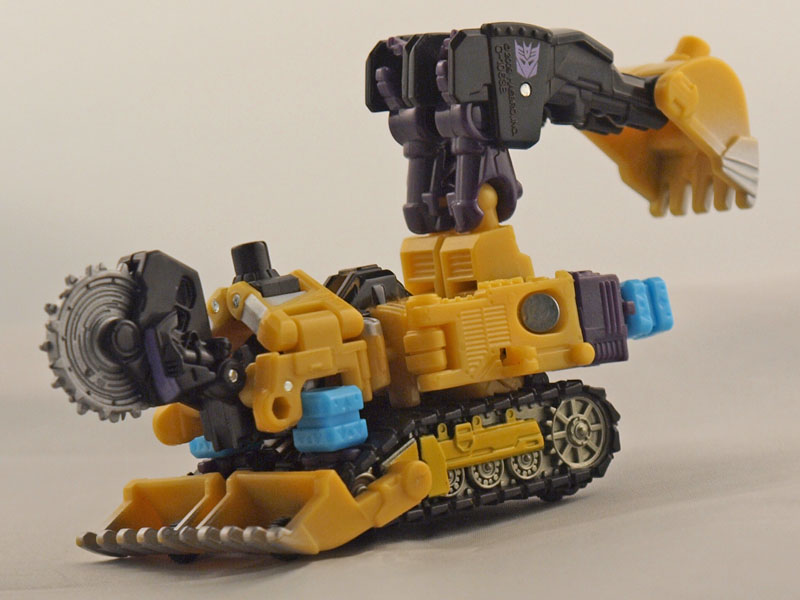 The alt mode is a backhoe with a chopsaw. There are also a pair of shovel plows underneath the chopsaw. The rear features the shovel. The combiner ports on the rear make tangible exhaust ports. The treads are very convincing in looks for being plastic, and also feature 4 molded wheels for rolling about. 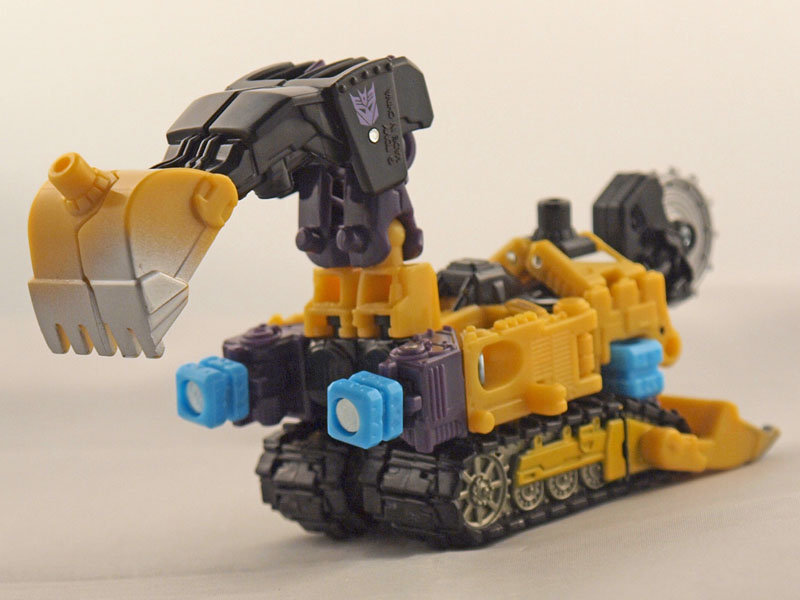 The backhoe shovel has three points of articulation, including the shovel head, mid-joint and base. There is also some rotating ability, but it's due to the ball jointed mid-joint. Since the chopsaw is connected to the head assembly, trying to use it at ground level will pop the head out of hiding. . 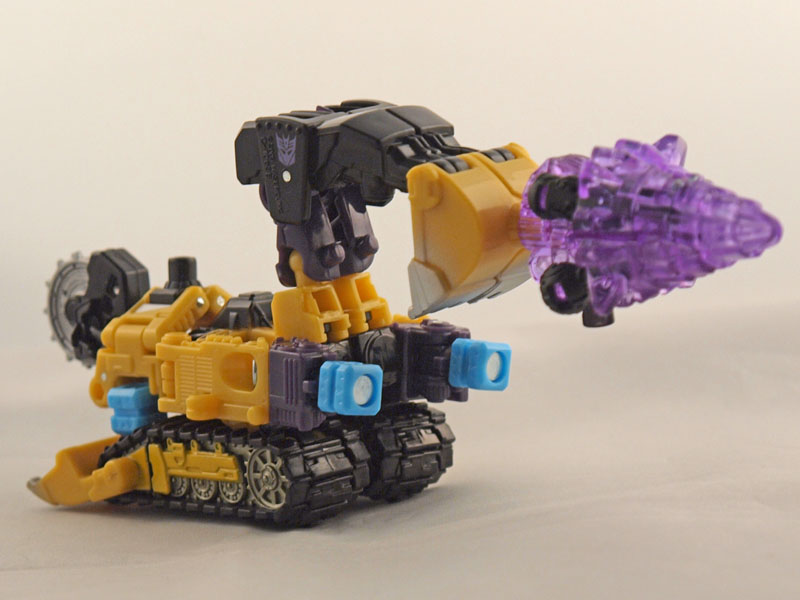 If having a shovel just won't do, you can also connect Throttler to the base of the shovel for a drill bit. Just a word of caution: You can rotate the drill, but do so carefully as the limbs don't have a strong connection point. 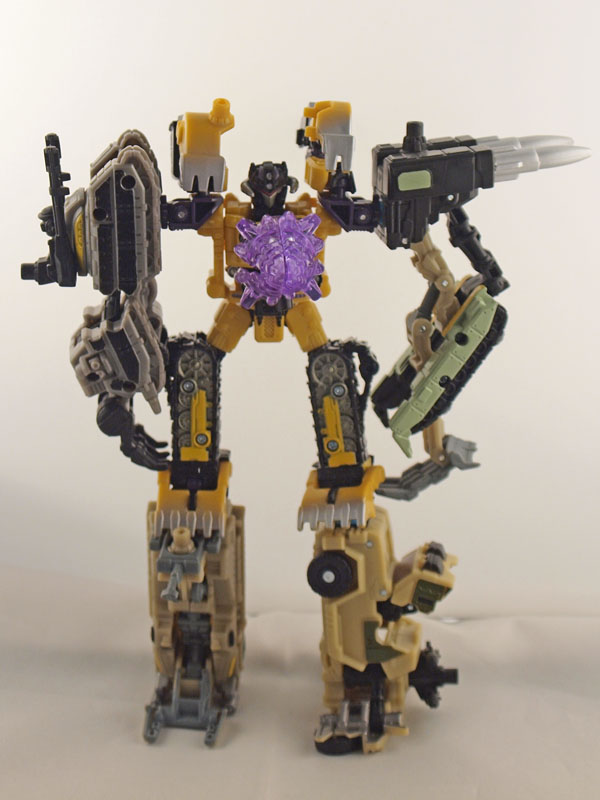 The combiner mode comes out looking a bit lanky, especially in the legs. However, one might like their 'cons to look a bit on the lean and mean side. At least the head sculpt has a vicious look to it.

Some functionality mishaps with the gimmicks, but good detailing
Throttler:

Worst minicon yet for the line, the drill mode barely holds together.
Combiner Mode:

A bit scraggly looking, but overall no complaints
Overall:

Not the best two pack out there, but has some potential based on upcoming drones.