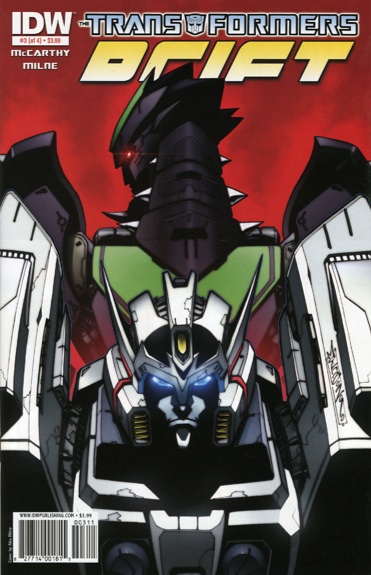 I thought when I opened Drift #3 this time round that it would pick up where it last left us off explaining to me whether or not he means to betray the third faction to Lockdown and the slavers. Instead I got something better! The creative team kept the tension of my questions in play a bit longer and drew me in to the story and that really impressed me. This comic continues to deliver the unexpected and it is the little things it's doing that is really making me fall in love with this story! In this issue we get the scoop on what happened in that fateful meeting of Decepticon and slavers and the deal Drift strikes. The slavers have plans for the third faction and I believe them to be a viable threat. I know exactly what failure will mean for the third faction and I don't want to see the slavers win. We see a definite inner struggle from our hero in training but I still waver on whether or not it will have the end result I'm expecting. Drift makes a solid choice it seems to stay true to the third faction and alerts them to the approaching danger. What happens next will define and set up the ending result which leads us into a wonderful sweet spot for issue 4. (Let's hope it delivers!)

"That color really sets off your eyes, do they make one with green to set off mine?"

Their are several things I have to praise about this issue. The element of consequences! Drift makes a decision and has to deal with the consequences of his actions. I love that about this comic. And he isn't the only one. We get a look, albeit briefly and in the dialogue which isn't as strong, at Dai Atlas and what is motiving him to the choices he's made. His dark past has turned him into the ultimate guardian but is it really what the third faction needs? His choices cause the council of light to ultimately chose their choice. And Drift makes his. I felt the explanation of why the slavers are a viable threat was played well. They actually have intention and it increased my emotional response to the third faction. The utopia's destruction and just why it will be so terrible if the slavers get a hold of them. Makes me wonder if they will continue to use this race to influence and oppose the rest of the Transformers at a later date? And honestly I hope they do!

"I do not like jokes, if you play another on me I will be forced to run you through!"

Now the shady elements… this issue has more exposition and not a lot happens, but it is still necessary because the things it reveals about Dai Atlas and the sacrifice the council members are willing to make seem pretty key to the end result which we don't see yet. And hopefully the next issue will see the fruits!The opening and closing of the comic starts with Drift's thoughts, much different than the last two issues which have closed us off to his inner dialogue. We've gotten lots of brooding glances and dark thinking stares. This is the issue where we see the pay off of everything that has come before. So while we have lots of dialogue it feels right. I'm not bored to tears, the tension builds. Lastly, with the introduction of Dai Atlas's past, I'm wishing now we had five issues. Again coming back to showing and not telling us about the characters. I know it's a juggle and sometimes you give ground in one area as a opposed to another. But I really want to know Dai Atlas's story now I am aware of his passion, fear, and motivation for Crystal City. It needs to be told and I hope that IDW gives it a serious look for a mini series in the near future!

Does Drift's conversion story hold air tight? I'm not feeling the love. It's the point that still makes me wonder if this shouldn't be another issue to really explain it all. Issue 4 has a huge bill to fill. Apparently there is going to be a confrontation, it's been building to one. Who will survive and who will win? And exactly what role will Lockdown play? All this to conclude soon!

It is Cybertronian tradition to carve shavings and sparks in your face before battle.