Ongoing issue 13 comes out this week and if you haven't noticed I completely failed to review issue 12 last month. And there was a really good reason for it. The problem being upon reading it I had such a negative reaction to it. (Kinda like breaking out in a rash after touching something irritating.) As a human being I personally want to be a positive uplifting individual and for the first time in all my reviewing experience, which I must say isn't long, I found a comic that stopped me cold in my tracks. As a reviewer I want to give the most well rounded and fair perspective on a positive take rather than negative. I don't want to be the reviewer that fails to entertain and becomes jaded about the comics IDW is publishing these days. Issue 12 wasn't horrid, it actually had some moments that I found to be amusing, but my objectivity to it was completely compromised because of my negative reaction and I'd rather not go there as a reviewer.

So moving on to this month, I am glad to present "HOT ROD IN SPACE!!" 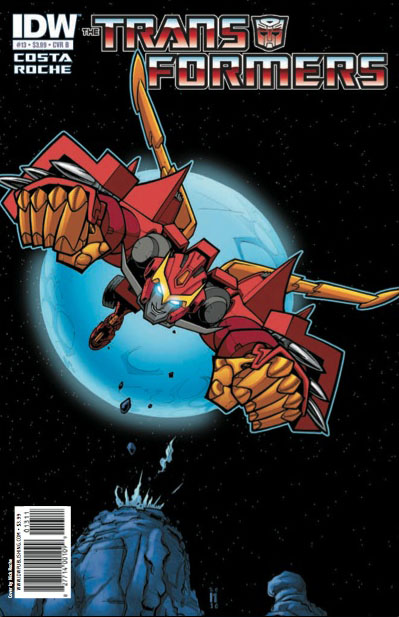 HOT ROD IN SPACE… jumping from moon to other celestial object and straight into your living room!

No really. He is in space this month. The fun loving Hot Rod, who listened to Swindle and got taken for a ride… no wait… was coerced… no… that's not right either… Hot Rod, who was renamed by Swindle as Rodimus and with his ego inflated stole Ultra Magnus's ship, jetting off into the stars with something to prove. Yeah, that sounds about right.

Those Autobots left behind… well, they have no idea Hot Rod has a plan. And he's NOT the coward they think he is.

The 13th issue, a number normally associated with unlucky and horror flicks, is in fact very lucky this time round for both Hot Rod and IDW. Year two of the Ongoing run, begins with Hot Rod's arrival to the astroid the Decepticons have disappeared to when they departed Earth the end of All Hail Megatron. At this location they have been licking wounds and growing in strength, despite Issue 7 giving us Razorclaw encouraging cannibalism and referencing a shortage in resources. The cons have managed to build a defense station on said astroid, and Hot Rod is headed straight for it.

Great scott man, can you not see it is last years model coming at us 5,000 units per nanoklik? So dated!

Well known for his on the fly planning and resourcefulness he sets the ship on autopilot and flies straight at them, jumping into a nearby weapons armory/locker to protect him as the ship is blown out of the sky. Those Cons sent to search the wreckage for something useful become quickly surprised by Hot Rod's survival and attack, incapacitating them. Using one of the mind control devices left by Bombshell he is able to take the fight right to the bearer of the ring, oops, I mean Matrix. Starscream calls him crazy and that he is, as he shoots the matrix itself! Double take… yes, he shoots the Matrix of Autobot Leadership itself and the resulting discharge wins him exactly what he came for.

Left only with the goal to find a way off the astroid with matrix in hand he finds his luck runs out and the resulting altercation leaves him dead in the water. Literally. IDW has already revealed that two Autobots would fall. Last month we had Bumblebee and this month we get Hot Rod. The only saving detail as his corpse floats off into the dark of space, he still HAS the matrix in his possession. Which means the Cons don't. If and when the Bots get the matrix back, which may not be for sometime, they'll finally see what became of Hot Rod. Coward no more… but crazy…?

Alas, one great illustration to show why Hot Rod should be a Wrecker! ALL GUTS, no brains… no fear… PERFECT! Somebody get me Springer...

This one shot was drawn by Nick Roche and colored by James Brown. I happen to be a fan of Nick's work so this issue already had the art going for it well before I even had it in hand. Nick's affections for Hot Rod make his contribution to this issue both bitter and sweet. Granted not everyone is a fan of Nick's work, so if you are hoping this issue changes your mind, it won't. This is all Nick in his wonderful style, even more crisp and stylized than he has given us before. I would love to see his characters become animated because they do have a special quality that makes them pop off the page. I could see this style animated very easily. Nick's dynamic filled faces are back giving us the authentic emotional tone the comic otherwise would not have. Whether or not that has been intentional or just an element right up Nick's alley, it's here and it's noticed. James Brown's coloring actually works very well here on this comic. Although the same simple mistakes do continue to crop in, the colors are bright the only real thing I can pick at is the lack of stars or too many. One extreme or the other, no middle ground. But this has been similar to the same problems in the past with the fractal computer screen patterns… the background calls way too much attention to itself by either too much or too little detail.

The pace was beautiful in this issue. The details got the right amount of page time, it slowed just enough for the Starscream/Matrix love scene, and jumped right back into the action. I believed the plausibility even if it was a bit cliche. I think Costa needs to trust the artist to tell the story with the art rather than making sure to insert a ridiculous toggle switch to turn the encryption off/on, or a screen that says "Autopilot" or "Collision Imminent." And then trust the audience to believe it. Sometimes the lack of viable technology breaks me out of the ongoing world. The conflict driving this issue was exactly what the ongoing story line needed after last months issue. We are off earth and we have no humans. And the threat at the end FINALLY feels viable.

Where is the fearlessness? Hiding behind a bauble? The Matrix doesn't save the chosen one… this time…

Now if only the following story arch in the coming months can start to grab us like this issue, ongoing will be well on its way to emotional pay off and fulfilling issues that leave us excited for the next comic. As for me, I'll be running down to my local comic shop tomorrow to pick this baby up.