Although the bulk of the figures presented in the ROTF lineup have been modern machines, we have occasionally been treated with more 'vintage' material. Their latest blast from the past is Highbrow, formerly a G1 Headmaster who retains his twin prop heritage.

You don't get as old as Highbrow without fighting a lot of desperate, can't-win battles. He's been through his share, and come out on top, every time. The Fallen may be ancient and nearly all powerful, but Highbrow is pretty old himself, and he's learned a lot of tricks over the years. Paired up with Autobot Ratchet, he's sure The Fallen will be surprised to learn just how tough two determined Autobots can be. 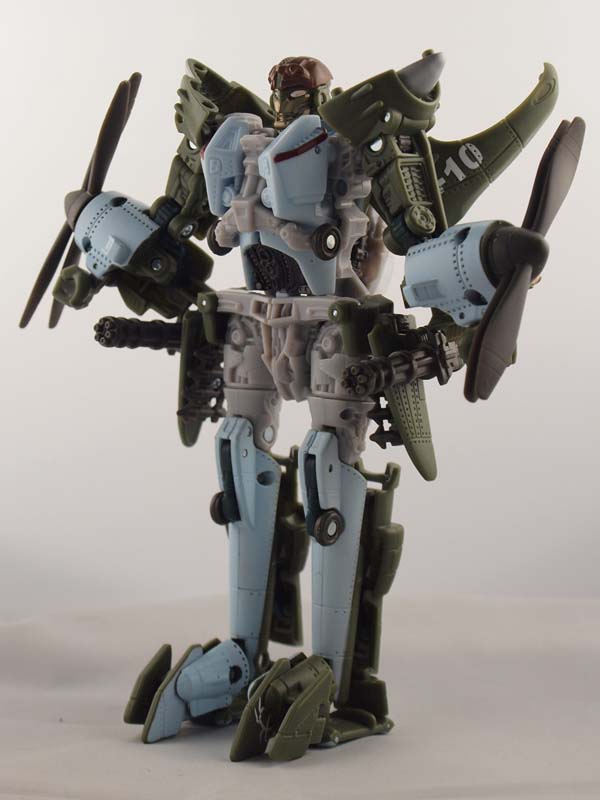 Just because the G1 name is being used doesn't mean it's the same character. This is an older Highbrow... and it shows. Who else but a senior Autobot would mix sky blue limbs and chest with a PVC gray waist and military green panels? The head sculpt even looks like it belongs in a crypt, especially with those creepy clear piped eyes. 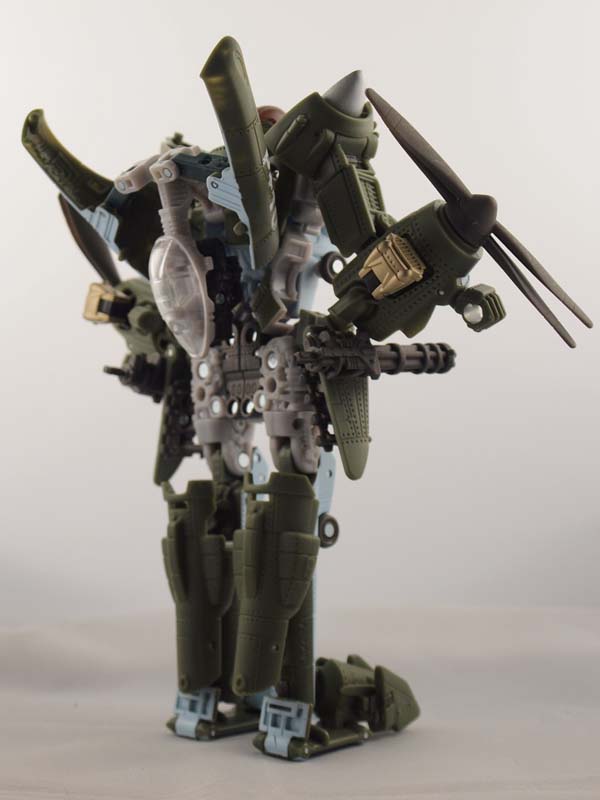 Still, Highbrow has plenty of redeeming qualities, once you get past the massive forearms. For one, the gatling guns on his hips can double as hand weapons. The aviator cap over his face can also come down to be a battle mask. 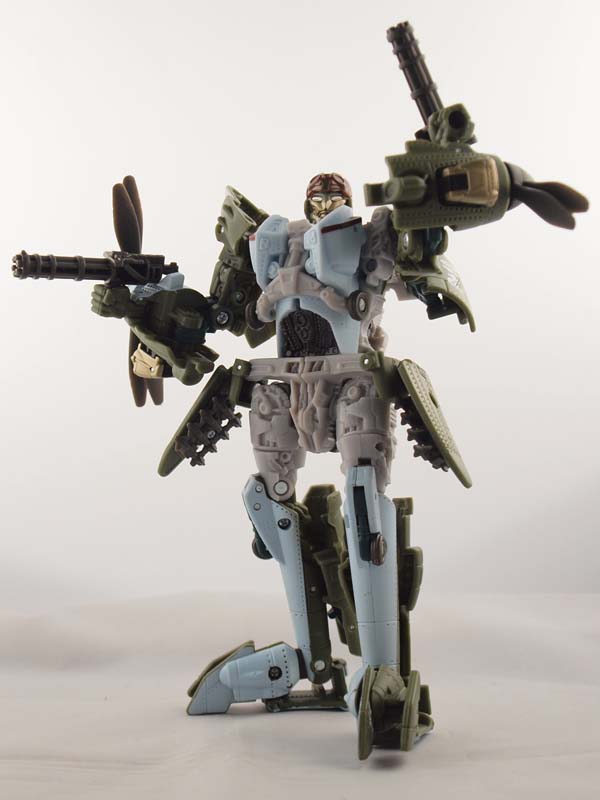 If that's not enough, you can even use his forearms as a melee weapon. Simply tuck in the hands and turn the forearms in 90 degrees. The brass colored engines on the rotor assemblies, when pushed down, will spin the rotors. Just don't expect a lot of freewheeling. They're on a pretty tight ratchet. 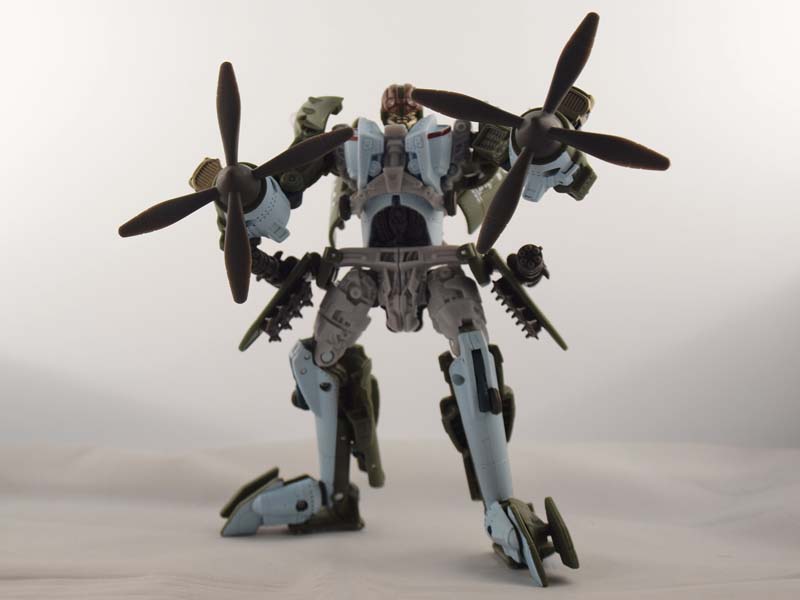 
Forearm kibble plays havoc with posing the arms close to the body. Hip kibble needs to be repositioned before utilizing full leg spread.

Highbrow has a simple yet involved transformation sequence. Fold the hands into the forearms. Pull up and in on each shoulders until they join to form the nosecone of the aircraft. The engines should be pointing straight up. Flip up the cockpit glass on his back, then wrap the two green panels around the glass to complete the cockpit. Pull apart the legs at the waist and tuck the hips in behind the engines.

Pull down on the bottoms of his feet until the panels are straightened out and pointing down. Fold the feet back to form the tail section. Rotate each tail section 90 degrees inward so the tabs face each other. Twist the tabs so that the colors match with the rest of the craft (blue should be facing down), then connect the tabs. Fold out and position the rear wings. Do the same with the front winglets. Fold the cockpit back into place. Cantilever forward the hinged panel on the booms forward and clip them into place behind the fuselage. Spread out the props to finish. 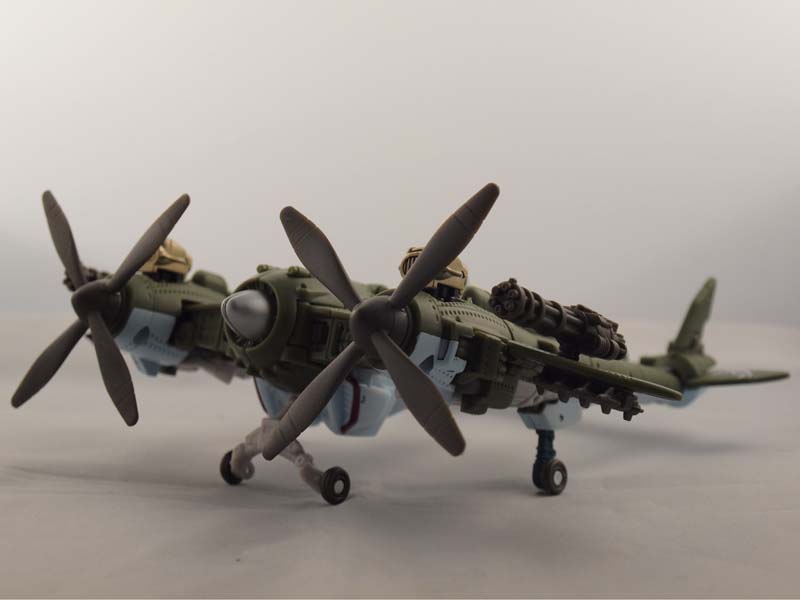 The alt mode could be considered a modern interpretation of the Lockheed P-38 Lightning twin boom bomber. However, this aircraft features a cockpit towards the rear of the plane. The end effect is futuristic, yet decisively retro. "P+10" is scripted near the semi-detailed cockpit on both sides. The aircraft is primarily military green, with brass colored engines and white Cybertronian markings on the rear horizontal stabilizers. 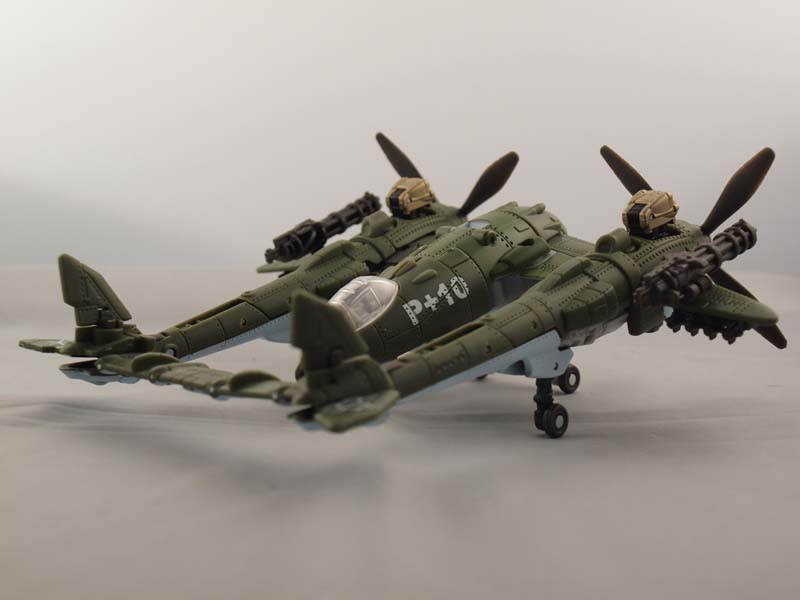 The plane features a 4pt landing gear. The front retractable gear has a single set up with 2 molded wheels. Each boom features a retractable rear landing wheel. To remind one that this is a fighter plane, each winglet on the side of the engine features a battery of four missiles on the underside, as well as a gatling gun on top. Pushing down each engine will spin the 4 blade rotor. Overall, a very nifty package.

Neo-retro look is both unique and very functional.
Overall:

A little more thought into the arms would have made this perfect. That's not to say he's not a hit as is.