Before he became a team commander, Stakeout was considered a loose cannon by many Autobots. He often ventured out on his own, against orders, determined to win the war on his terms or not at all. Undergoing the power core process has mellowed him. He has learned that with power comes responsibility, and is determined to use his new power for the greatest good. 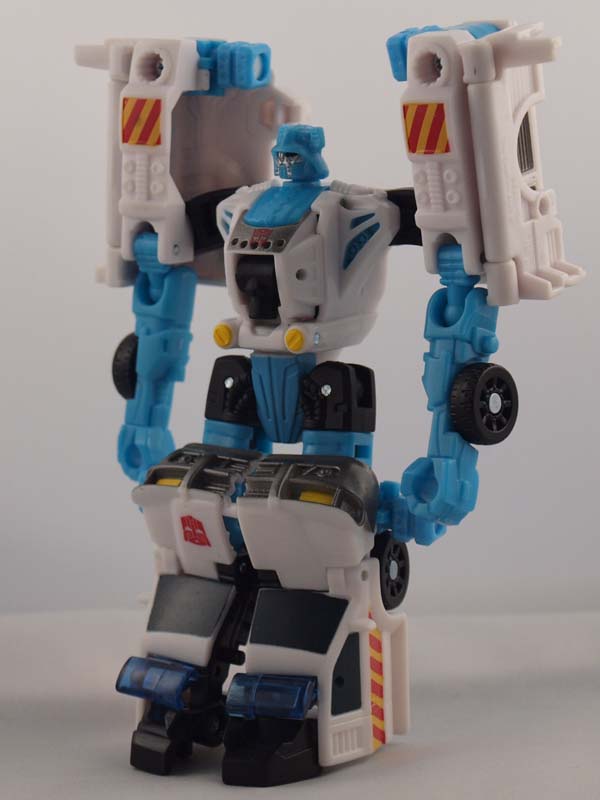 Stakeout adopts a mostly white paint job. The upper arms and thighs are doie up in sky blue. Being that this is pinned as a Protectobot set, the color scheme is appropriate. There are no mold changes. 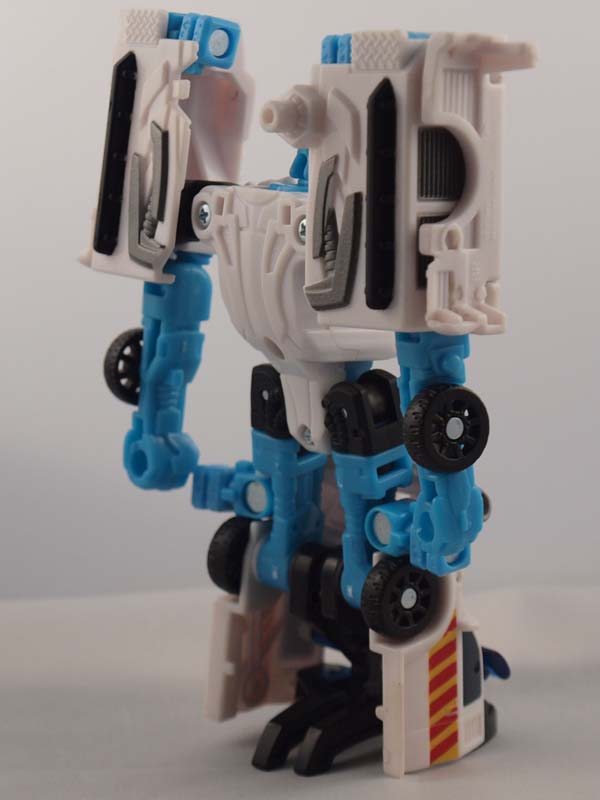 Which isn't a bad thing. Smolder has some of the best articulation in the PCC line thus far, and Stakeout benefits from that. It's a smart repaint, so long as the sky blue doesn't get to you. 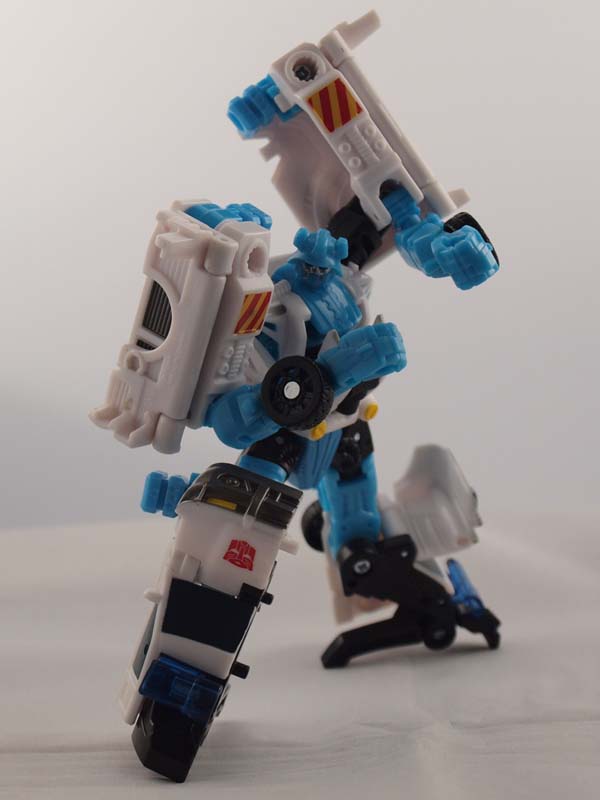 
Lack of waist articulation is the only downside. 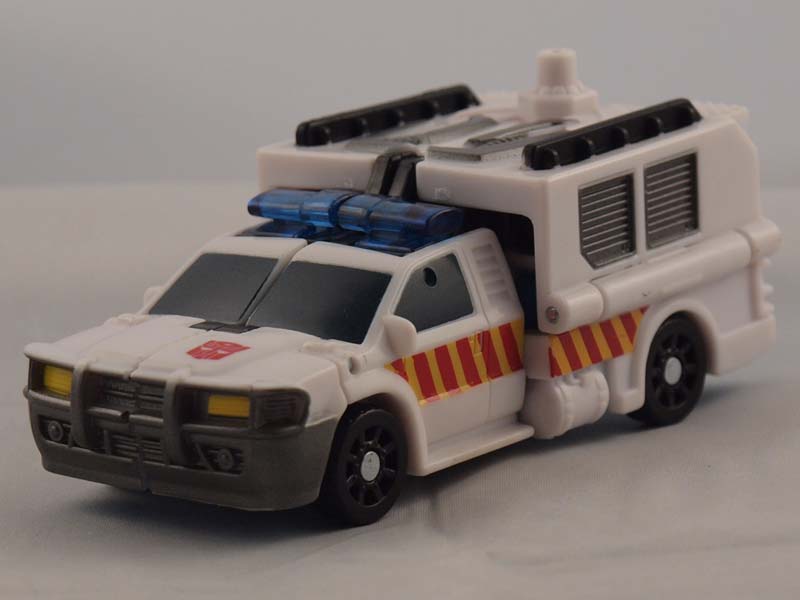 Instead of being a fire rescue truck, Stakeout goes for the unmarked rescue truck. Aside from blue light bars on the roof, the Autobot insignia on the hood and the reflective striping on the sides, Stakeout is largely without logos or shields. 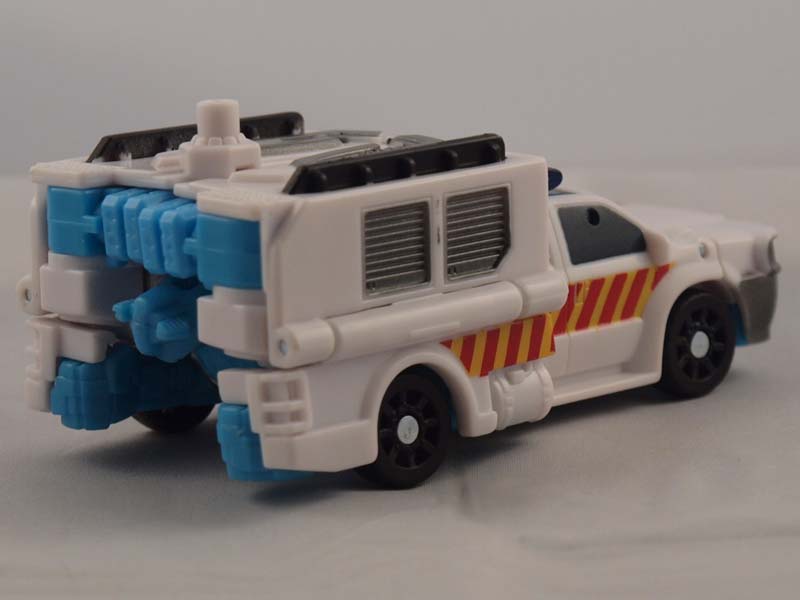 Besides the gaping hole on the rear end, it's a nicely done repaint. Though one might argue that it could use some scripting on the doors, nonetheless it advertises it's purpose well.

Stakeout features 4 drones repainted from previous releases. They are the APC from Bombshock, the jet from Skyburst, the tank from Bombshock and the rescue helicopter from Skyburst. Like the other 5 pack drones, they combine with Stakeout (or any other Commander) to form the Combiner mode. Why they pulled Combaticon drones to use as Protectobot drones makes no sense to me.

Identical to Smolder. The helicopter and tank form the arms, while the jet and APC form the legs.. 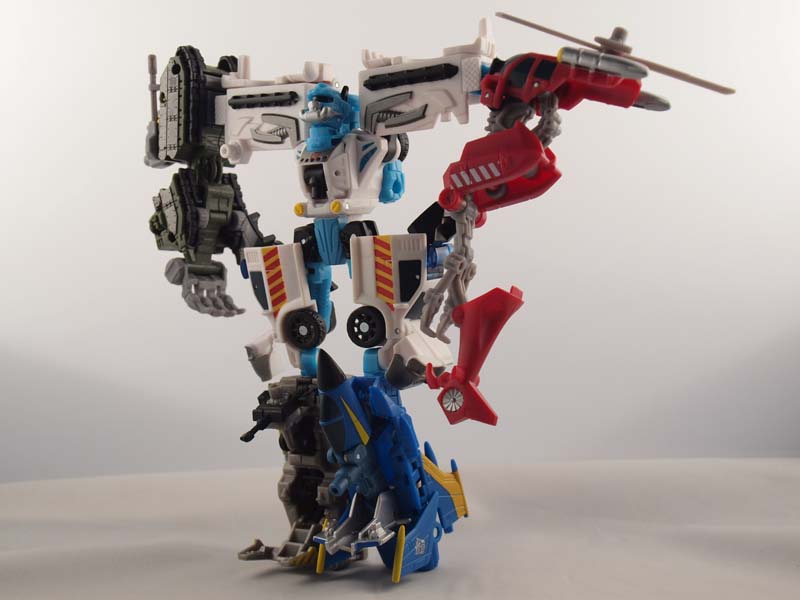 The jet drone from Skyburst is a horrible leg module. Why it was seen fit to reuse it is beyond comprehension. Not only do the wings not stay in place, there is a permanent 'limp'. 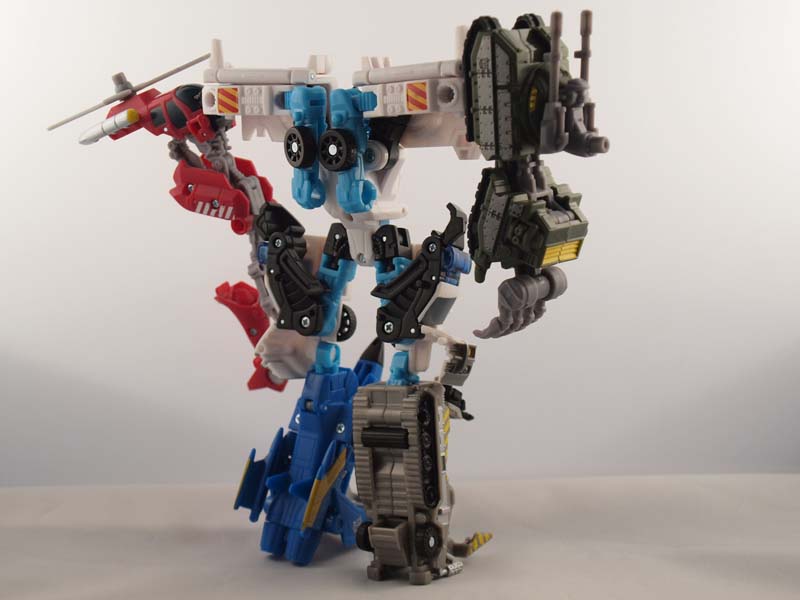 Otherwise, Stakeout looks rather well. The extra benefit to Stakeout is the 'cheat' shoulders that will allow you fuller arm articulation. The only thing that could have made this better is a better selection of drones..

Poor choice of drones for a 'Protectobot', especially the jet leg module.
Overall:

A nice, no-frills repaint done injustice by being paired with awkward drones.