Time to shuffle the deck again, as we look at another repaint in the PCC lineup. This time, we get a look at a redone Bombshock, renamed Steelshot.

Even before becoming a power core commander, Steelshot was a master of long range combat. Now, with Beacon acting as his spotter, he uses his powerful cannon to pound targets up to 100 miles away, softening them up for an all out Autobot assault. 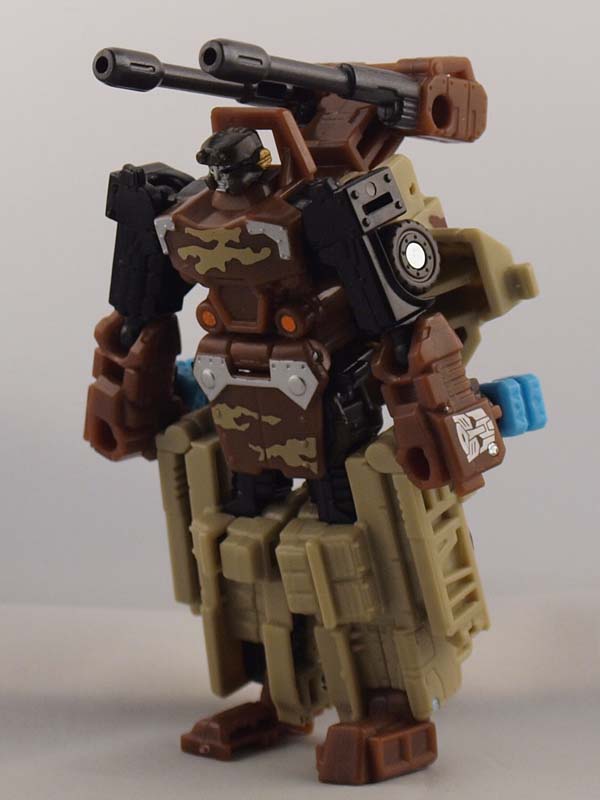 Steelshot dons a desert camo paintjob on his chest. The legs are khaki, with the forearms done in brown. The thighs and upper arms are black. Personally, this paint job does justice to the robot mode. There are no mold changes. 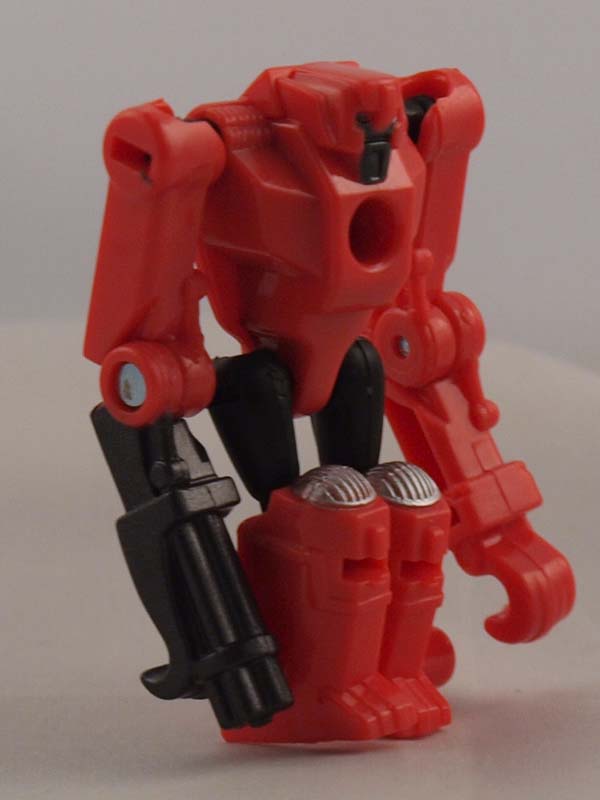 Beacon is a repainted Backwind from Searchlight. It's interesting to note that, instead of being done in clear plastic, Beacon is actually done in solid red. This must have been a production change, as the card stock shows Beacon in a clear tan get-up. 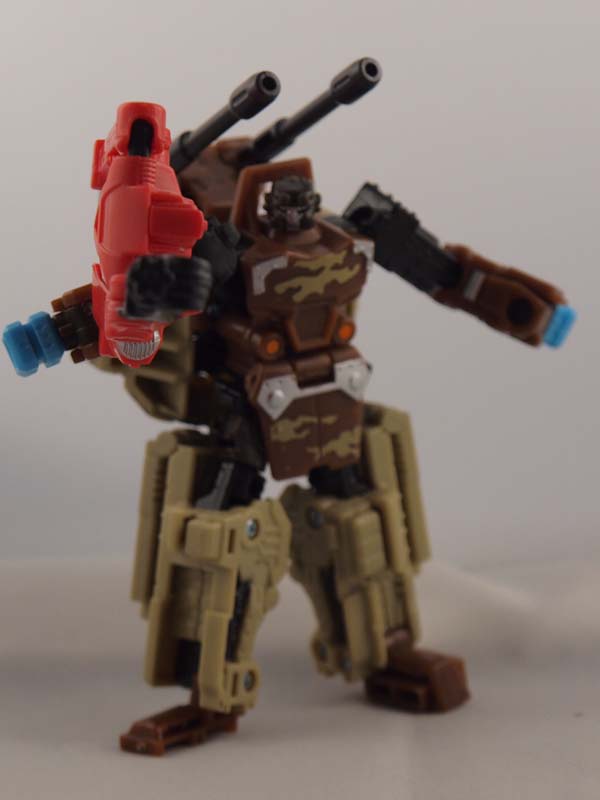 Unfortuntely for Backwind, his armor mode is pretty useless with Steelshot. That's because Steelshot's minicon peg is on his back. You could look at his armor mode as a sort of power pack. However, the hand weapon mode still works fine.


Still a good poser, but you will have to lift up that groinplate to get full articulation. 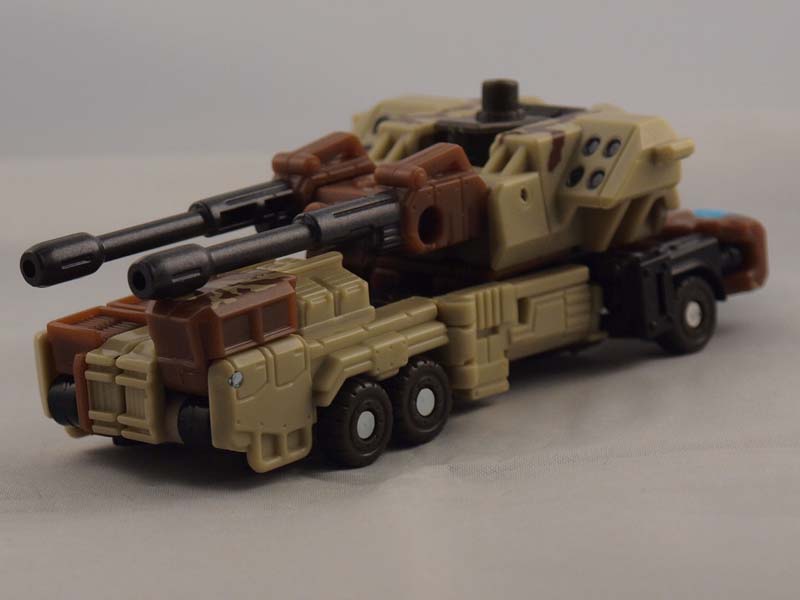 The vehicle mode for Steelshot is primarily khaki. Some brown shows up on the cockpit area, rear end and turret bases. Again, no mold changes here. 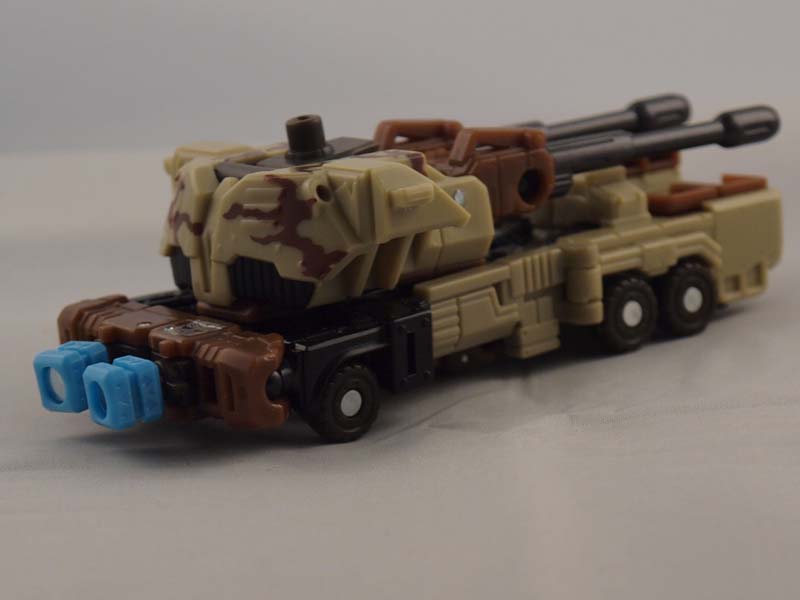 All the functionality from Bombshock is still here as well. The turret is rotatable a full 360 degrees and each barrel is independently adjustable. 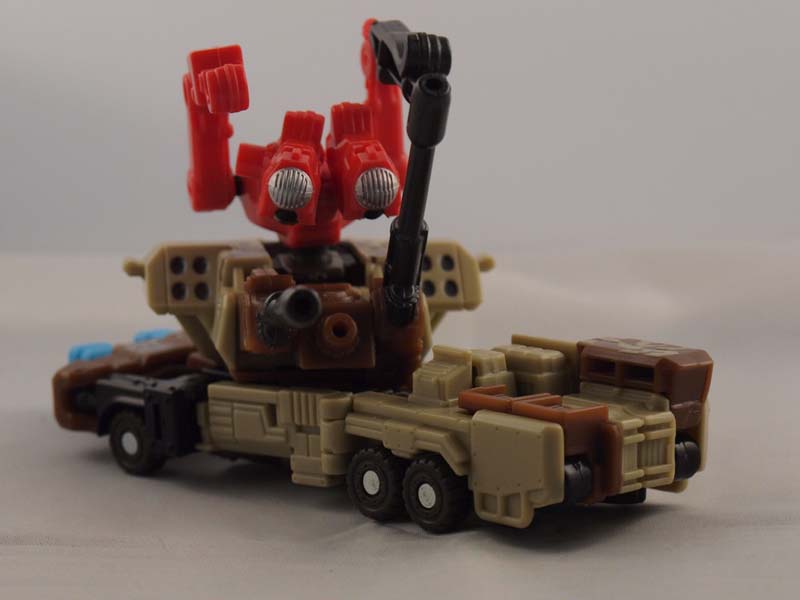 Beacon's vehicle attachment mode looks out of place at first, but if you give it some thought, this could make Steelshot a sort of armored salvage vehicle. It's too bad that glaring red makes Steelshot, well, a beacon to the enemy. 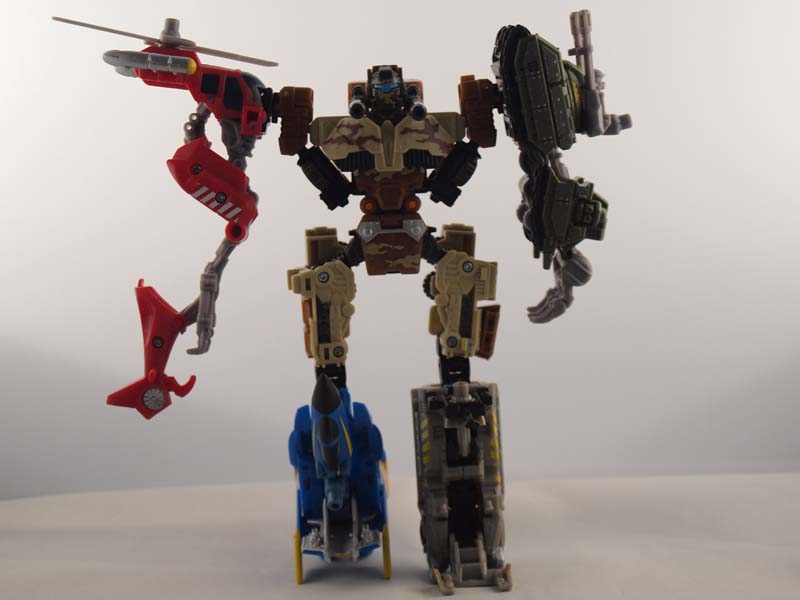 The commander mode head is also done up in desert camo, with a blue visor. Bombshock was a solid combiner chest and Steelshot is no exception. Plus, like Bombshock, Steelshot has the added benefit of those shoulder cannons.

Suitable paint job, all the benefits of Bombshock.
Alt Mode:

A decent pairing, but that red glare contrasts. Plus, armor mode is virtually useless
Combiner Mode: