Not many people were still absorbed in the G1 era as it slowly died off in the late 1980s. One of the final sublines was the Super Pretenders, which had pretender shells also capable of transforming. The most popular of these figures had to be Thunderwing. Generations has revived the name and, while no longer a Pretender, have attempted to capture the look.

Thunderwing is so single-minded and powerful that even Megatron hesitates to get in his way. He is loyal to the Decepticon commander, but one he is given an order, nothing stops him until the mission is complete. All too often, that mission is the annihilation of a world that has defied the will of Megatron - a task at which Thunderwing excels. 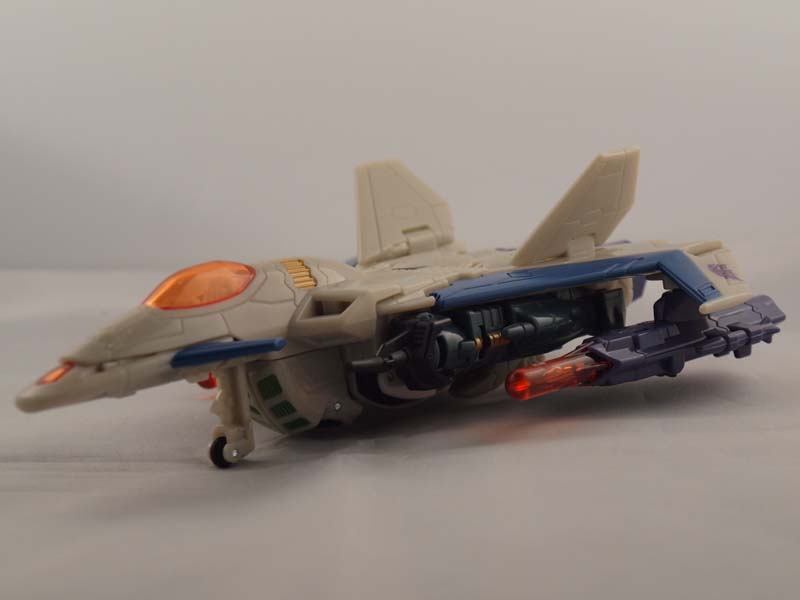 Thunderwing's alt mode is an inter-stellar jet. It is mostly white in color, with blue on the wings and a clear orange cockpit. The thrusters are purple. It may not be an exact replica of the G1 namesake, but the basics are there, including the wing design and laser cannons that sit below the wings. 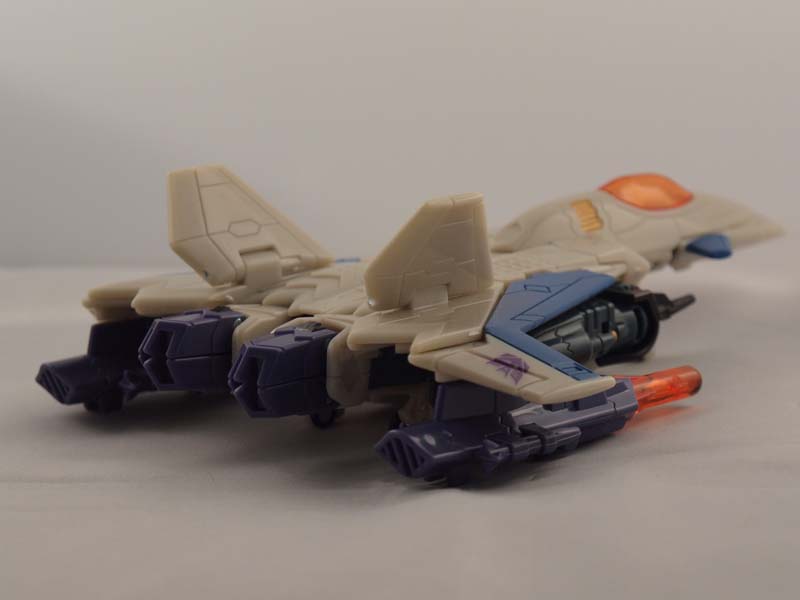 Speaking of under the wings, there is a 3pt retractable landing gear assembly underneath. Also under the wings sit a pair of launchable missiles. However, the pegs for the launchers is pretty shallow, so the launchers tend to fall off rather easy. In a homage to the 1988 design, the nosecone of Thunderwing splits off to act as a drone. The drone is non-transformable, but has a general resemblance to the original's inner robot alt mode. To launch the drone, the nosecone landing gear has to be partially retracted.

Pull the rear of the belly forward on it's hinge. This will allow you to stretch out the legs. They don't extend down, but rather cantilever out. Fold the belly back in place to form the chest. Fold out the feet. Lower the piece guarding the head into the abdomen to finish things off. At this time, you can either elect to peg the launchers back on the wings OR peg them to the fists. 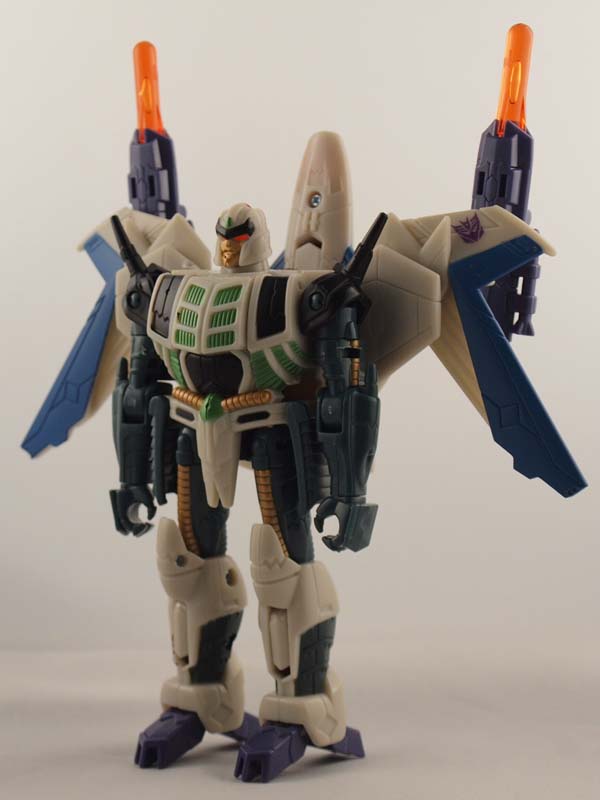 The robot mode is a venerable dead ringer to the Pretender shell's robot mode of yore. The thighs and arms are done in aqua blue, with the chest awash with green, gold, black and white. Though not as menacing as the original, the head sculpt is still executed very nicely. The eyes are piped orange. 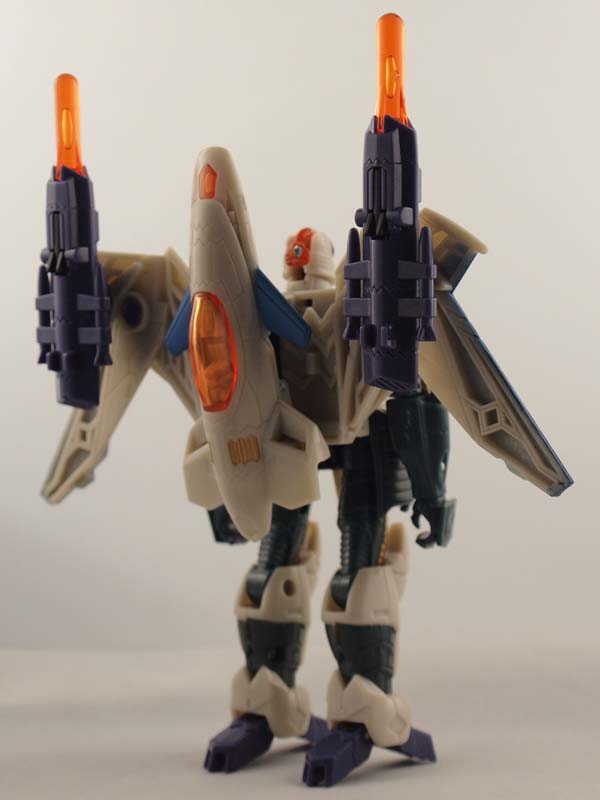 As mentioned earlier, you have two options for the launchers. You can either leave them pegged to the wings (with missiles facing up or down, your call) or you can peg each launcher to his fist. I'd recommend taking advantage of his articulation and using the launchers as hand weapons. 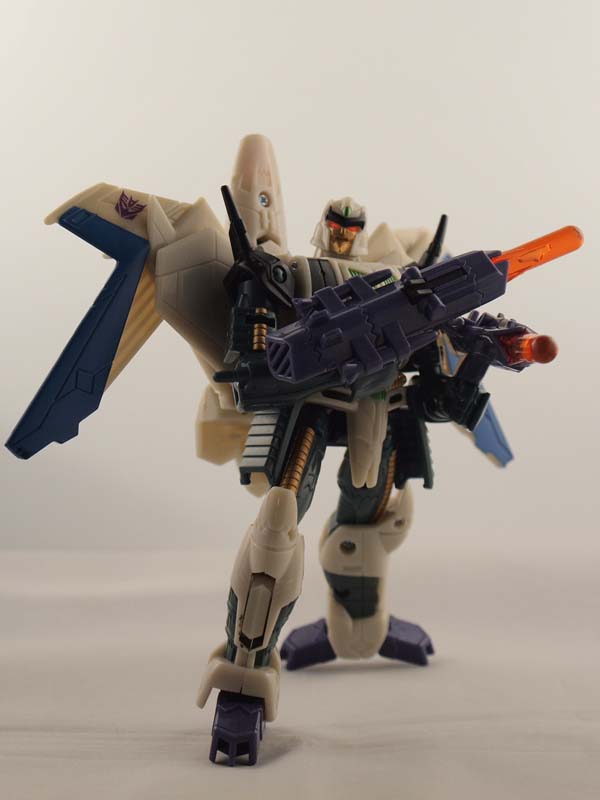 
Waist rotation is really the only thing missing. You can still pull off some good poses though.

Near perfect tribute to 1988 mold, now with useable articulation.
Overall:

He might be smaller than the original, but he's just as mean looking... and better than ever.