Take one part Generations and one part Hunt For The Decepticons, add a pinch of rubsign, and you'll get Hasbro's latest subline, Reveal The Shield. We kick off our coverage of the first wave figures with Turbo Tracks.

If there's one thing Autobot Tracks loves, it's himself. In his opinion, nothing is quite so fine as the glint of sunlight off his perfectly polished chrome, or the looks humans give his sweet paint job as he rolls by.He's no coward, but he avoids battle all the same, if only to protect his precious body from getting scuffed or, even worse, dented. 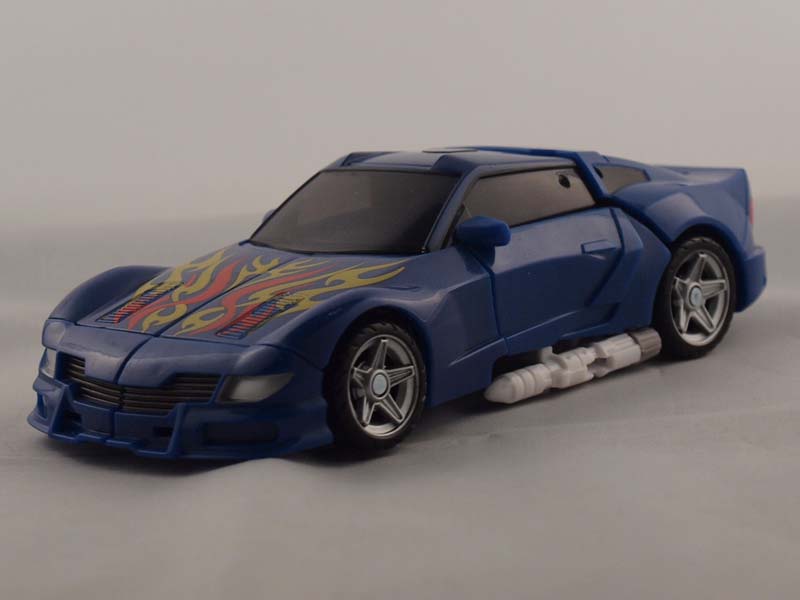 Tracks utilizes a sports car as his alt mode. The car is stylized after his G1 vehicle, albeit with a modern touch. The deep blue paint job is only interrupted by the flame decals on his hood, with red and yellow flames dancing about. Gone are the retractable headlamps, replaced by clear lensed units. 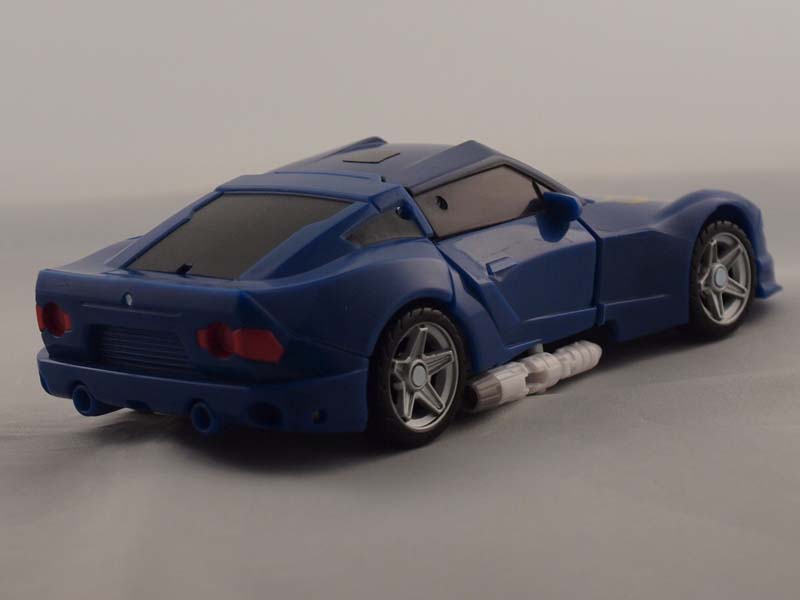 Most of the glass is smoked except for the backglass, which is painted black. Interestingly enough, the tail lights are recessed, as if they accept a peg. There is no indication this will serve a later purpose, but it does make you wonder. Underneath each door you'll find a white side exhaust, which also double as missiles. The main gimmick for this line is the rubsign, which in this instance is found on the roof. 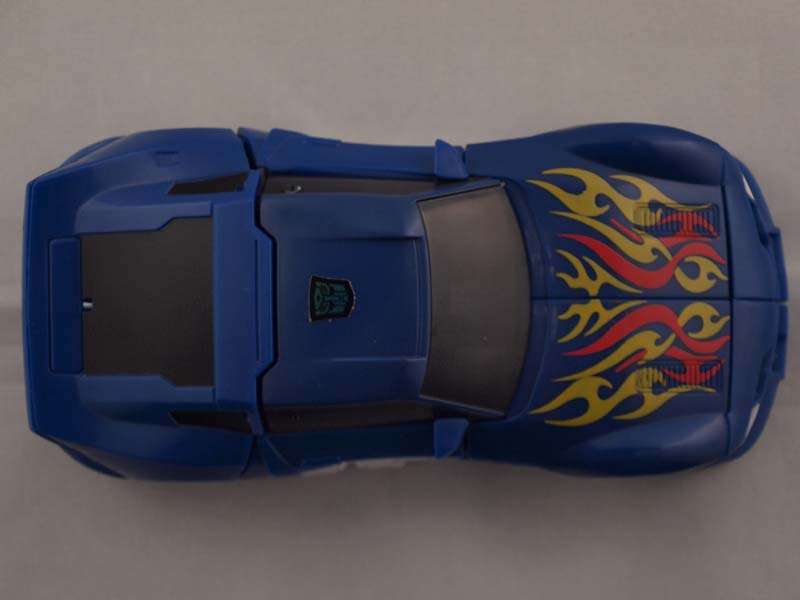 First off, don't try to activate the rubsign if your hands, the figure AND the room temperature are cold. It takes a good amount of heat, and patience, to get the rubsign to do it's mojo. Otherwise, it's just like the G1 days. Rubbing the sign will reveal in thermal image the figure's faction, in this case Autobot.

Peel back the hatchback 90 degrees. On the decklid, you'll see a rectangular tab. Pushing down on the left side will flip around the bar exposing 2 tabs. You will peg the missiles to this tab. With the hatch still back, push down on the doors. Close up the hatchback. Peel the doors back as far as you can and flip out the wingtips. 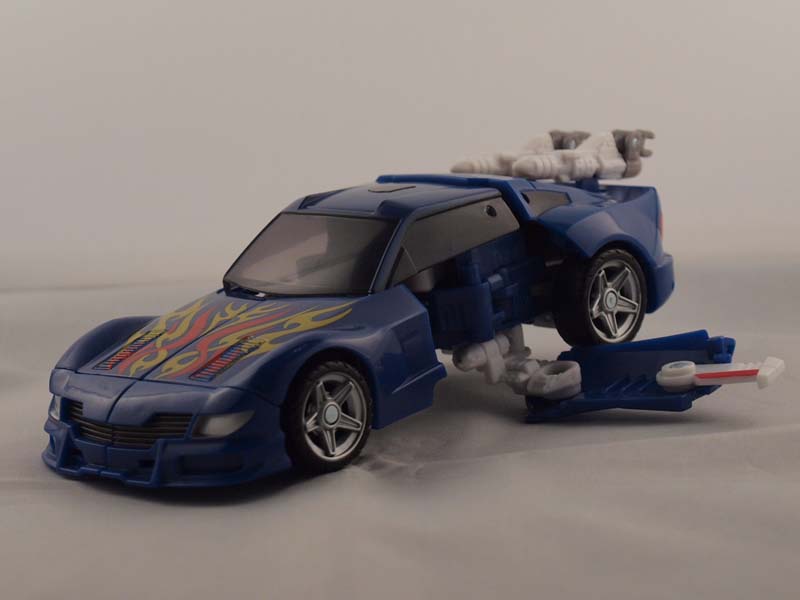 The end result is less than spectacular. Using the doors as the wings creates a gap in the profile of the vehicle. Not only that, you now cannot lay the vehicle flat on it's wheels. From certain angles (mainly from the front looking down at an angle) it looks wicked. From most other angles, it looks like a hack job.

Transformation (From Alt To Robot Mode)

Start by raising the hatchback and then flipping it half-circle so it ends up on the belly of the alt mode. Unclip the weapon stored underneath the hatch. Flip out the grey panel hidden next to it. Pull on the front end to extend the hood out. Fold down the doors. Fold the rear wheels so that they point down. Flip the arms around to the sides of the cockpit. Finish hinging the rear wheels so they sit in front of his shoulders.

Pull down on the grille, then up to form the basis for the feet. Push up on the chest to expose the head and broaden the shoulders. Rotate the waist 180 degrees. Peel the doors back as far as you can, then extend the winglets. Using the gray panel as a guide, fold up the hatchback so that it 'hangs' from his back, while the grey panel lines up to grooves behind his head. This panel does not actually snap in.

Clip the missiles to the gray panel to form the shoulder missiles. Unfold the black beam gun and place in either fist. Alternately, you could also choose to peg the gun to the panel. 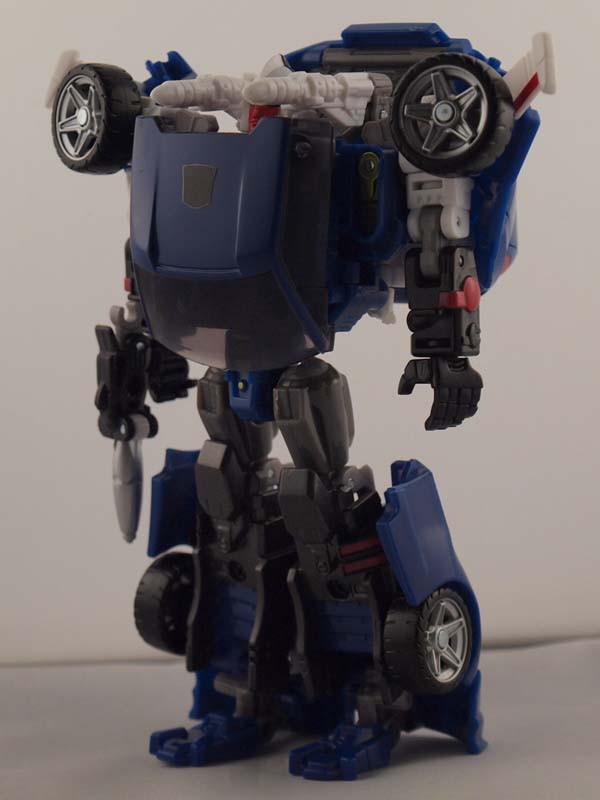 The robot mode almost perfectly captures the essence of it's G1 counterpart. Coloration is the same deep blue, with black thighs and forearms. Some red shows up on the forearms and knees, and white makes up the upper arms and winglets. The head is absolutely perfect when comparing it to the G1 Anime version. There is no piping. 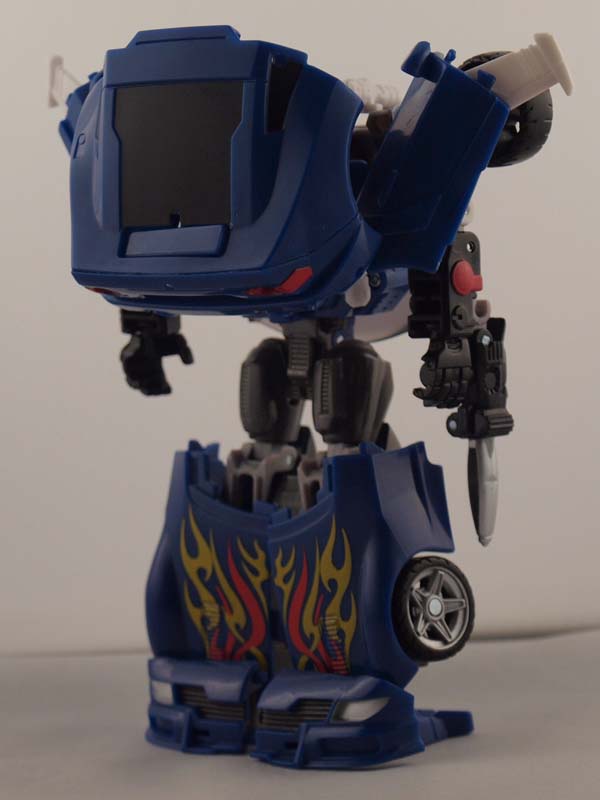 In previous images, Tracks seemed portly or short. However, in person he is properly proportioned. With the two shoulder missiles and the black beam gun, his is also properly armed. He is a great tribute to the G1 version, just forget about the flight mode and you'll enjoy this figure. 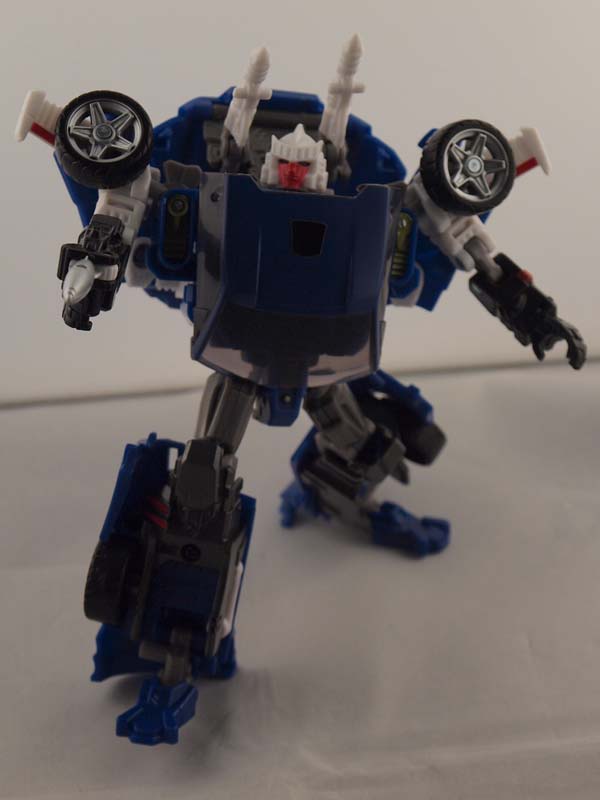 
Legs are somewhat restricted. Also, the shoulders run into kibble issues and cannot use the full extent of their articulation. However, that's not to say wicked poses can't be pulled off.

Lazy flight mode takes away from an otherwise great figure. Rate a 9 if you don't intend to use the flight mode.