NOTE:Due to an inaccuracy originally reported, this review has been edited from it's original content, as well as replaced with correct images. Any changes will be marked with an underline for easy identification. Our apologies for the former inaccuracies.

Being that G1 Jazz was my very first Transformers figure ever, there will always be a special place in my soul for him. Needless to say seeing the movie version of Jazz had an ill effect. Seems I wasn't the only one that needed vindication for Jazz, as Hasbro has now released a G1 inspired Jazz that's more than just a copycat paint job.

Autobot Jazz falls in love with every world he visits. The tiniest hint of alien culture is enough to fascinate him for hours. his ability to immerse himself in a new civilization makes him an ideal undercover agent - he blends in with the environment, absorbing every bit of data he can, and looks for the anomaly that tells him Decepticons are present. 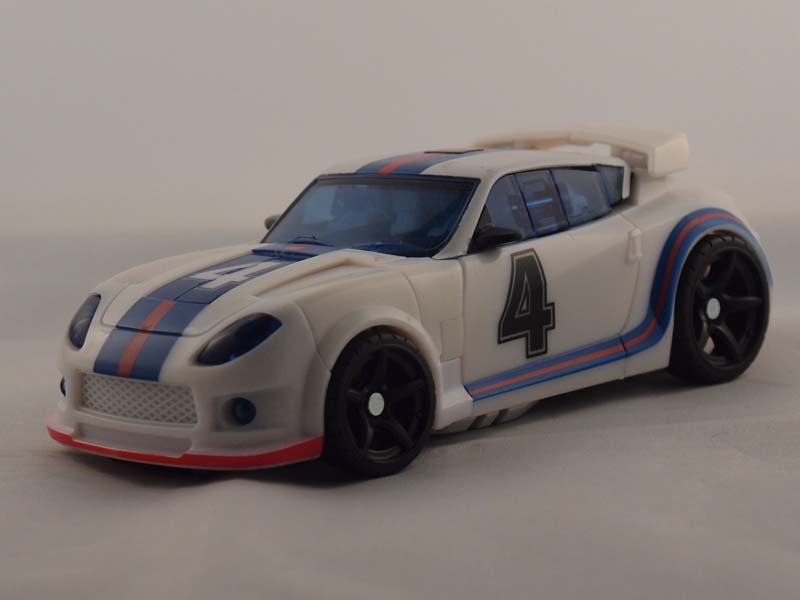 For his alt mode, Jazz uses elements from both his movie vehicle and his G1 vehicle. The front end has heavy styling cues from the Pontiac Solstice, while the rear represents the teardrop design of the Porsche 935. The paint job is also faithful to the G1 figure, white with a wide blue comp stripe accented by a red center line. Windows, headlights and foglights are all translucent blue. Although you won't find any Martini & Ross logos, you will find racing number 4 on both doors and the hood. 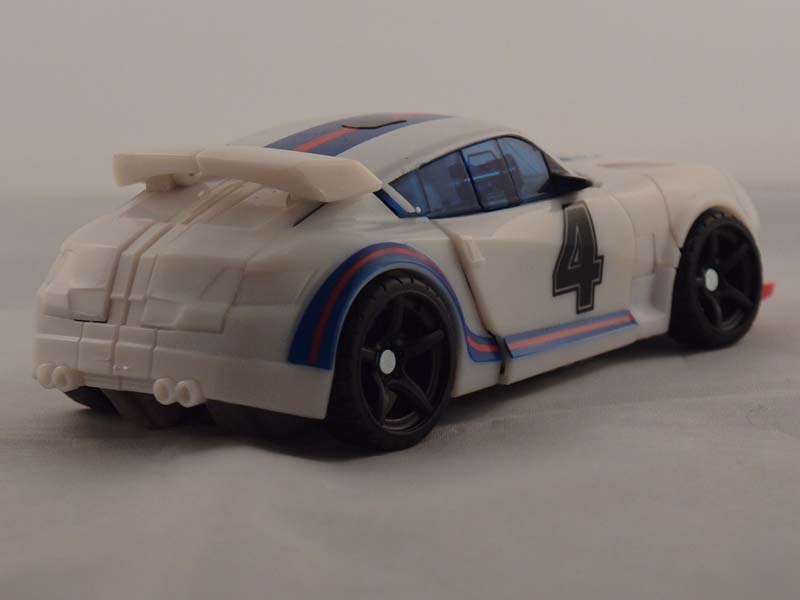 On the roof, you will find the rubsign which confirms his Autobot allegiance. As sharp and detailed as most of the vehicle is, the rear end is surprisingly bland. In fact, there's no paint apps at all in the back. While a good detailer can fix that, most fans might find this a bit underwhelming. 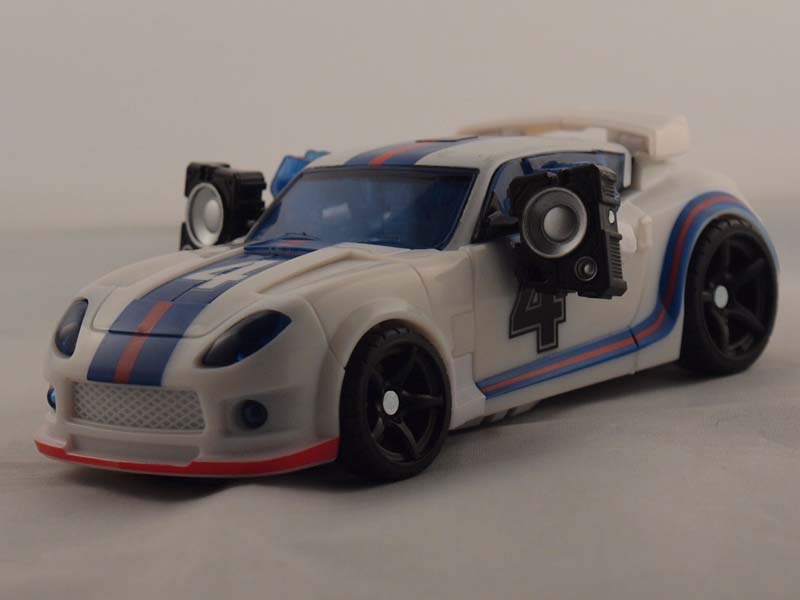 One neat feature is the deployable speakers. Open both doors and you will find the speakers attached to the inside of the door windows. Simply pull out the speakers and flip them around the top of the window. The end result is serious tunes being belted to the outside world. While not anime accurate (the speakers originally deployed from the rear), it's a nice touch.

You'll find that Jazz transforms a lot like his G1 counterpart did. After opening both doors, peel the rear end upward. Straighten out the legs. Make sure to unfold the lower legs from the rear end assembly. This might take some careful loosening, as the assembly is pretty tight.Spread the legs out so you can flip the feet forward. Remove the gun stored under the front clip. Pull both arms down, then peel them away from each other. As you push down on the hood, the head will rise up into place. Rotate the arms into place to finish. 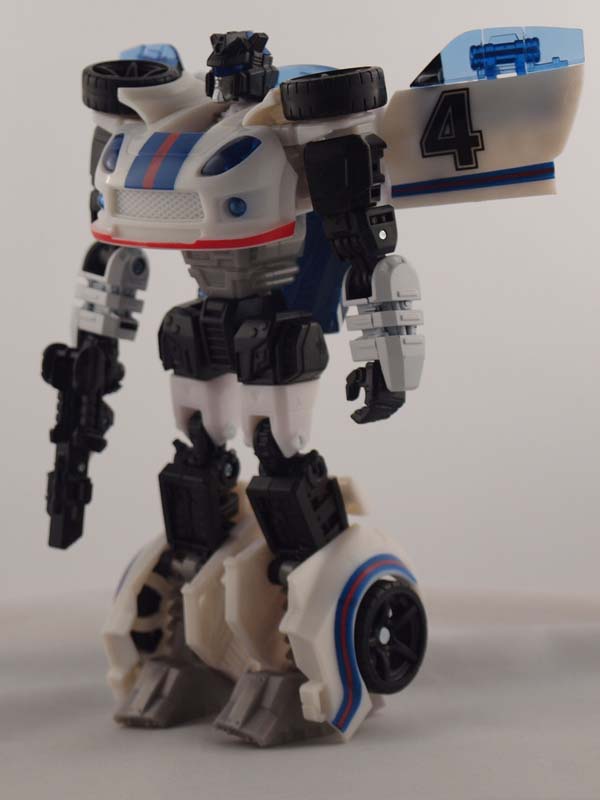 The first thing you notice about Jazz in robot mode is he has some rather big feet. And you know what they say about big feet... yep... stable posing. Otherwise, he is a near spitting image for the original Jazz sans the chrome. One put-off is the head mold. It's very accurate, but he looks so moody. Like he's about to bust a cap on someone. Though the optic visor is translucent blue, there is no piping. Just a note, the initial images made the head look rather small. However, in person, the head is proportionate. 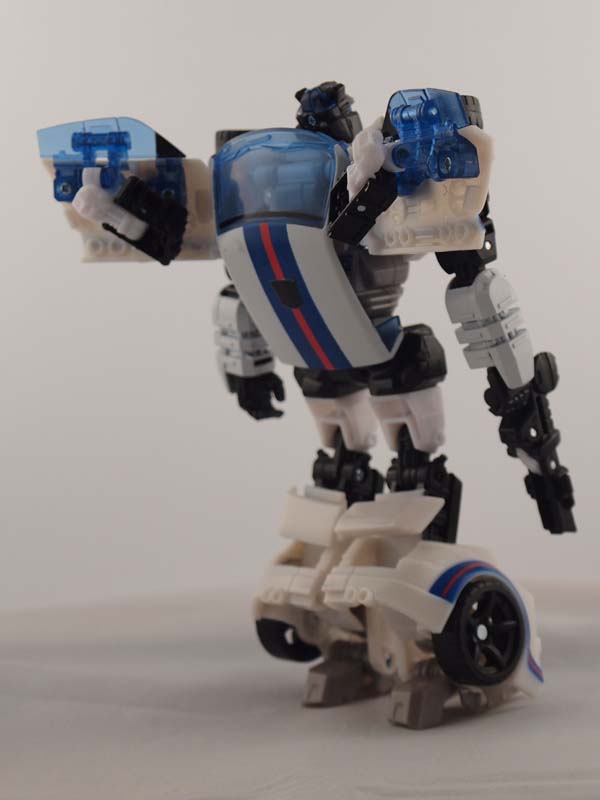 The speakers can deploy and rest on his shoulders if you wish to dazzle with sound. Again, not accurate to the show (the speakers deployed from the hips), but still a nice touch. The weapon, once expanded, can fit into either hand. 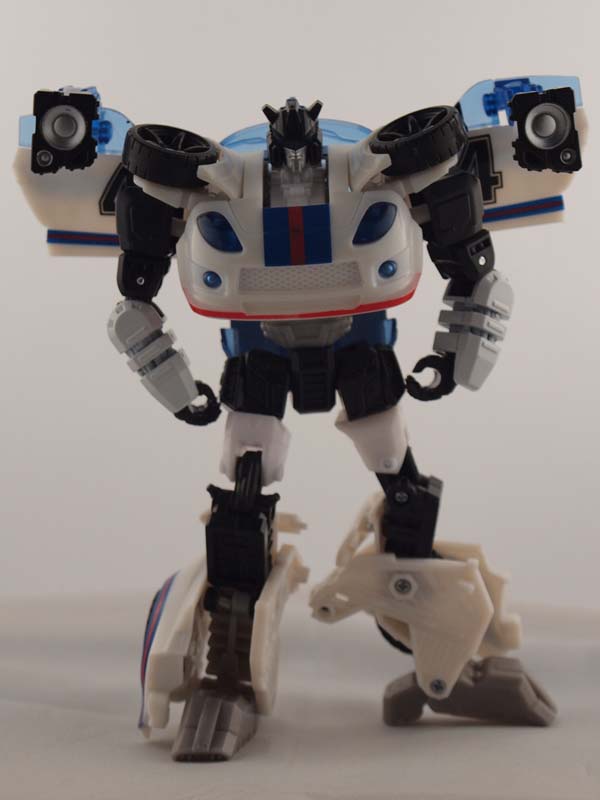 One bonus is that you can use the speakers with the gun to make a wicked weapon. Simply unclip the speakers from the door and attach a speaker to each side of the weapon's barrel. The clip point is on either side of the target sight. 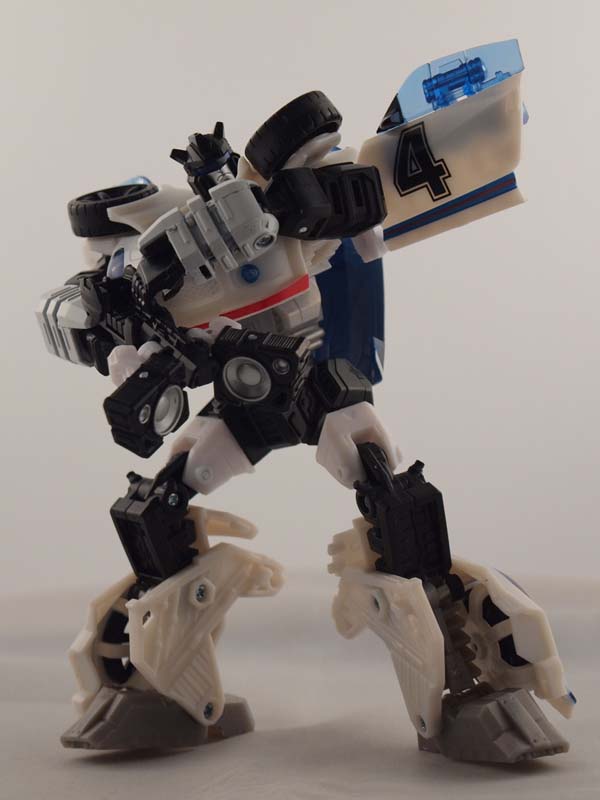 All the right details are there, with lots of playability to boot.
Overall:

He might not be perfect, but he's as close as one can expect to get for now.