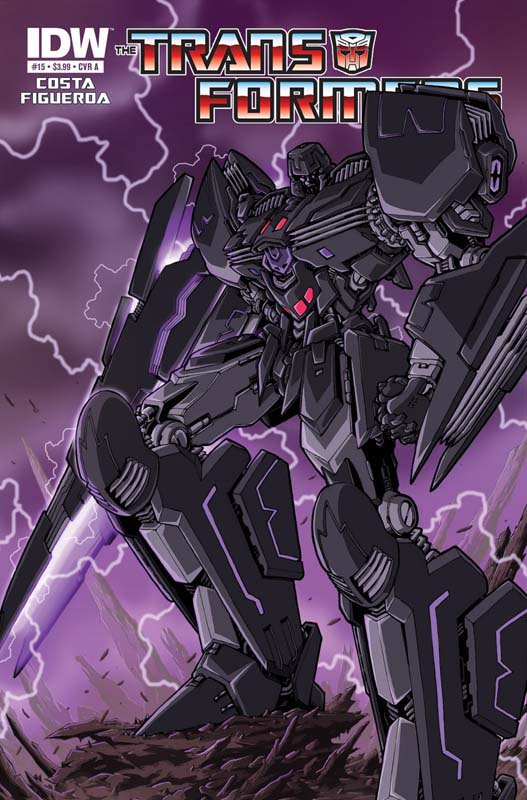 Spoiler Alert: Megatron is back in issue 15… doh we already know that...

If I could put a tag line to describe issue 15 which will be available for purchase at your local comic shops in about 24 hours, I would christen it… BIGGER, BETTER, BADDER! If you didn't pick up issue 14 last month… DON'T. Ongoing #15 blows it out of the water. In fact, although it gives us much the same information minus the cliffhangers (and minus what happens to Prime and the returning Skywatch group over seas) it feels more fleshed out and a more complete paced storyline than even 14 offered. This is what I wish every issue of the ongoing was. Where every panel gives us something of importance, acceptable dialogue that moves the story forward and oozes character and wit, panels with just enough explanation that you don't have lingering questions of what wasn't made crystal clear. 15 is a good standard to hope the rest of the ongoing storyline will rise to meet and even exceed the bar. I've described Ongoing in the past to salad, this issue finally felt like a satisfying and filling dinner with the Fillet Mignon I've been craving for the better part of a year. As much as I loved the tension in 14, I feel satisfied saying 15 tells exactly the same information but only in a better more complete manner. And then some. It also fills in the little gaps we've been wondering but maybe haven't vocalized yet.

Is Starscream seeing a ghost coming for him in the shadows? Is he hallucinating?

14 is forgettable when you read 15. (Well, maybe I won't forget Megatron's decomposing head the end of 14…) When I opened this comic a few weeks ago I read it and was quickly annoyed we'd been given 14 at all, as much as I praised my enjoyment of 14. I found myself happily reflecting over the images and the plot points of 15 more than the previous issues' short lived suspense and gotcha moments. In fact, I'd started to wish 14 had never been given to the audience at all. 15 just tells the story better, it doesn't rely heavily on the suspenseful moments. (Or catering to get fan excitement.) It isn't "padding" if you remove 14. If you leave 14 in the mix its painfully obvious one of the Ongoing problems is it's lack of telling information consistently relevant to the pace of the plot. Ongoing is padded with a lot of irrelevant information often repeating what we've already been told. (And sometimes even the art is repeated.) This issue is padding… but if you were to wipe your mind of 14… thus deleting the padding that is in 15… you would find the story told in a more complete way. I should be angry about the padding, but I'm still happy with this installment because of the level of it's craft.

If there's something strange in your neighborhood? Who ya gonna call? Ghost "robot" busters!

And I'm going to praise 15 in the hope that the writer and editor come back and analyze this issue. My challenge is to delete 14 and repeat the crafting of the story in 15 to this level again for the future. Push yourselves, tell us more story in a shorter amount of space and don't be too wordy… be the professional storytellers we pay $3.99 a month to read! I know you can do it because I have the proof in my hands with 15. What does the 15 ongoing comic give us this month? We get the complete picture of how Megatron managed to survive, the loyalists who helped him, how the weapons crafted from what remained of his shell made it to earth and were distributed by "Earth's Children," and then came into the hands of Joe Gladki. And finally the Autobot response to the jail break. It could very well be the same comic, and I know many fans who have purchased 14 will be in an uproar that this one says the same thing yet gives us a bit more. But it tells it much better which is why if you haven't picked up 14, skip it… 15 is much better.

If you radio starts… talking to you… Who ya gonna call? Ghost "robot" busters!

This is the last issue we'll be getting artist Don Figeroa. And I'm glad to see it end on such a good note even if a controversial one. Don has given us a great bunch of comics for the IDW run, I wanted his departure on the series to end well and I believe it has. The man has already won my respect and I wish him well on anything he endeavors. Next month Alex Milne will be taking over on art duty. Dalhouse hit the sweet spot with his starry skies this issue, and he'll have a chance to continue with the Ongoing run. It's still flat coloring, but at least the textures of the backdrops don't distract… there's a bit more cohesion here.

The suspense builds… Why didn't they take Megatron with them? Are they rebelling? Do they know he's back? Read 15 to find out!!

The only thing I wish I could see at the end of 15 is the cliffhanger that 14 was chalk full of. Certainly we get a moment but it isn't near the height of bravado that 14's exploding airplanes or masses of Megatron guns produced. I know what I've said in my review is going to be received both hot, warm, and cold… But I'm going out on a limb here by saying exactly what 15 did to me as I studied it over. It's a better written version of 14 and I think that once the fans and readers give an honest look at the differences of what we are given in both issues, they'll see that 15 is a better crafted story. And I hope in time IDW's compass gets back on track to again give us the outstanding stories I read and first fell in love with when I picked up Transformer comics more than a year ago.