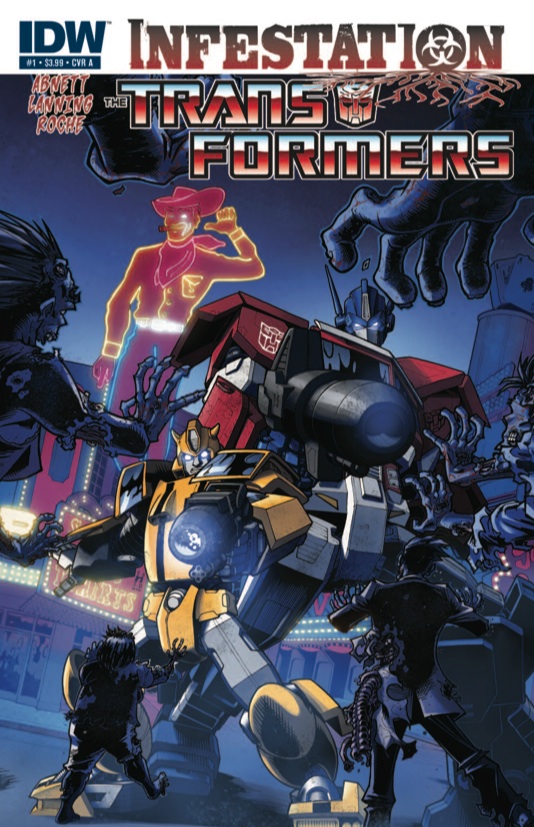 What happens in Vegas, stays in Vegas!

I have to say the doldrums of life have been dragging along and as we've all been waiting patiently for more transformers comics to be announced from IDW, Infestation has come upon us. We've been infested with undead goodness and giant transforming robots! Oh my! IDW promised this was going to be a crossover for a huge portion of their titles, that it would fit easily and make sense, and be in continuity. We all wondered with that pit in our stomachs if they could do it? And they were not kidding.

Never mess with a Prime, he will put you down a second time!

If you haven't picked up the intro comic, you can although it is not necessarily required to read issue 1 of the Transformers storyline. (Which will be two issues long.) The Intro comic, which have no transformers in it, sets up the premise for which the zombies appear and infect the story lines. A supernatural unit called the CVO (Covert Vampiric Operations) which consists of five individuals is called in to handle a zombie infestation in the New Mexico Kirkland Underground Munitions Complex. At this complex an interdimensional portal has been opened and out comes the zombie horde controlled by a hive intelligence called the Undermind. The undermind is using the portal to expand and spread to other dimensions and multiverses. By subverting two of the CVO members, one of which becomes living artillica, (magically enhanced technology) the Undermind (via Britt, a female agent turned to their cause) is able to open a portal to multiple universes and spread their hunger to other worlds. In the resulting confrontation, Britt zombi-fies a machine and they literally throw a wrench in the portal to collapse the whole thing. But at least four other worlds have been threatened, and the agent Britt is among them, having been ripped into several versions of herself.

"Open wide, Prime, time for a little dental work." What is this unhealthy obsession with dental work, Nick?

Enter Transformers Infestation issue 1! A ship falls to planet earth. Within this ship is a mixture of the Undermind's zombies and Galvatron's crew. Crashing in Las Vegas, Nevada, the Decepticon's ship opens letting out the hungry horde with Galvatron in hot pursuit to destroy it before it grows too strong. In the confusion, Galvatron calls for Prime who shows up with the valiant Autobots to stop him, completely unaware of the lurking danger. With him are several recognizable characters; Bumblebee, Prowl, Ratchet, Drift, and Kup! The resulting battle distracts the Decepticons and Galvatron from stopping the zombies, giving them the minutes they need to infest the Las Vegas population. The Autobots subdue Galvatron with inhibitors and realize the infection among them, albeit too late. Prime orders a quarantine on Prowl's suggestion and Las Vegas becomes Zombie Ground Zero for the next 24 hours when the force dome collapses. As they interrogate Galvatron he finally tells them how they stumbled upon the zombies, just as Kup reappears freaking out and babbling about how one of them isn't one of them.

This comic brings back the fun in Transformers. It has great continuity ties to what has come before. Spotlight Kup and Sideswipe, and All Hail Megatron 14 and 15, comics we haven't had reference to for about a year. And the character personalities that have taken a back seat in ongoing have reasserted themselves, quickly establishing a line of immediate authority. It's great to see the guys back! The dialogue is fun, the story doesn't take itself too seriously, and has that air of humor and wise cracking playfulness that has all but disappeared from the ongoing flagship. And the rising threat… well, zombie reputation precedes it. Lots of munching, but the robots are more concerned with each other while the zombies gather. How will the Transformers fair against their hunger? You'll have to pick up this comic to find out! If you've been feeling the itch of wanting more fun, more snappy dialogue, dying to see Prime being Prime, and Prowl being Prowl… with a bit of Kup freak out to top it all off… you better run to your local comic shop and buy this comic this week. (I mean, what have you got to loose, two issues of Transformers Infestation, about the price of a premium theater movie in the states…?)

Dan Abnett and Andy Lanning have made a smashing entrance into the Transformers world. They have shown their understanding of previously told Transformers stories that were fun and unique and have built on them. The pacing starts slow but quickly builds momentum. Their dialogue seems spot on and although there is nothing supernatural about Transformers, they have put just enough of the element into this story to pull it off in this comic. I await to see how they will end this opening zombie verses Transformers two comic saga. Because the ending twist, has my attention. Nick Roche (Spotlight Kup, Last Stand of the Wreckers) art, which is top notch and colored by the ever impressive Joana LaFuente (Spotlight Drift, Ironhide miniseries) delivers a wonderfully rendered piece of story to make your face smile with delight. It's great to see Nick doing the characters he's drawn in the past so well, back in a current comic. His characterization is unique and expressive. And Joana, who makes colors vibrant, has excellent control and understanding of color temperature and lighting, makes the art sing.

When zombies are your best friends there's always someone to give a hand.

2011 is off to a wonderful start in the Transformers world. The new writers on the block are all kinds of satisfying in Transformers Infestation. This, my friends is gonna go fast as in two weeks we'll have the next and last installment for the Transformer edition. So make your way with all due speed and pick this comic up at your local retailer. The only downside of this comic, I have to wait two weeks to see the second half! And last, but certainly not least, thank you IDW for this, it was a nice treat!