It's not very often that Generation 2 figures are given the makeover. Most of the 'reminiscing' has been with G1 characters. With the Reveal the Shield line, there is at least one G2 figure that will be represented. That would be the G2 interpretation of Optimus Prime, with a little Bayverse thrown in for the heck of it.

As leader of the Autobots, and their foremost warrior, Optimus Prime has gone through many changes over the years. He alters his weapons and body based on the needs of a mission, or as a result of damage sustained in combat. He learns from every situation, always coming back to duty tougher and more powerful than before. 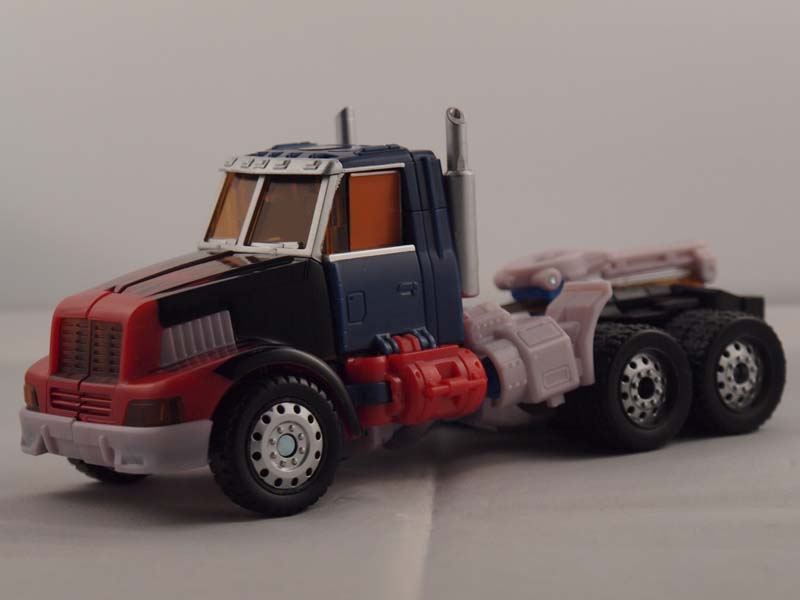 Optimus Prime retains his semi mode, but it is stylized after a western frame tractor cab, similar to G2 Laser Prime. Prime features a red nose with flame treatment along the fenders and hood. The remainder of the front section is black. PVC fender vents are located just above the wheel flarings. Interestingly enough, the cab section is painted blue, with silver trim on the windows. The windows themselves are painted orange. Red can also be found on the fuselage below the doors and on the bulkhead behind the cab. The tail of the tractor is all black, save for the PVC 5th wheel. 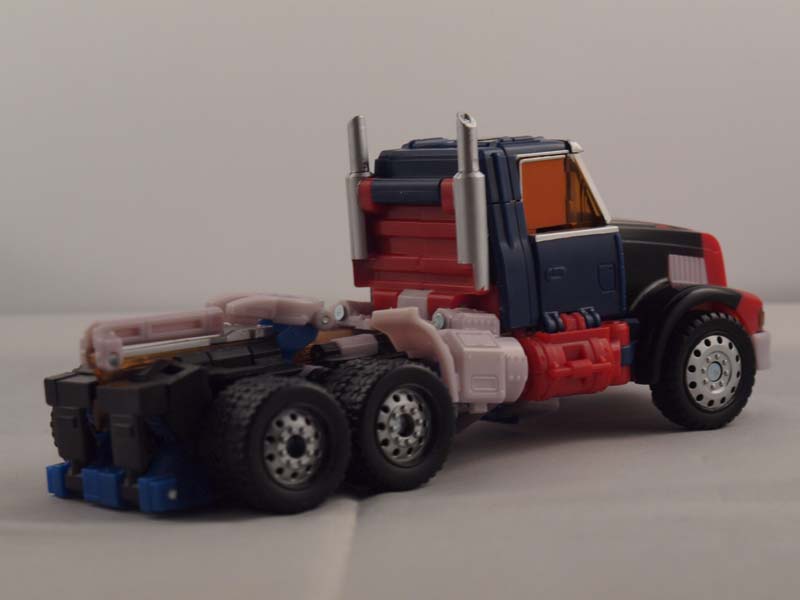 One curious detail is the smoke stacks. They are unpainted, but they are slso hard plastic. With all the controversy over protruding smoke stacks on previous Primes, it's interesting how Hasbro has allowed rigid stacks to extend beyond the roof of the cab. I'm not complaining, mind you, it's more of a disturbing inconsistency. Overall, Prime comes off looking like patchwork with the various detailed (and undetailed) applications. One worrisome note is that the rear wheels have absolutely no ground clearance, so it's best to roll hi on a soft surface. Also, the rear mudflaps don't seem to lay as flat as they should due to the inherent design. Definitely could have used some more refinement overall.

Start by pulling the tail section apart in half. Remove the fifth wheel, which will convert to his weapon later. Pull the cab doors downward. Pull the rear mudflap section upward on a hinge. This will allow you to free the arms. Pull the nose of the cab outward and down. Pull down the black tabs at the end of the tail sections, then flip the feet out.

The top of the tail sections have a pair of tabs each that can be pulled out and folded into his inner legs. Once the tabs are secured, start with the center wheels and arc them up and around until you can recess them into the legs. Do the same for the rearmost wheels. Fold the mudflap sections inward until they join. Twist the forearms 90 degrees so the door faces back. Peel back the roof of the cab. Flip out Optimus' head, then push the roof back in. Push in the side windows of the cab. Flip the cab section forward, then push down to lock into place and complete the transformation.

To form the sword, flip out the PVC handle 180 degrees. Slide the fifth wheel up until it is on the other side of the slide, then push the fifth wheel in to lock it in place on the hilt of the sword. The sword can be placed in either of Prime's open hands. 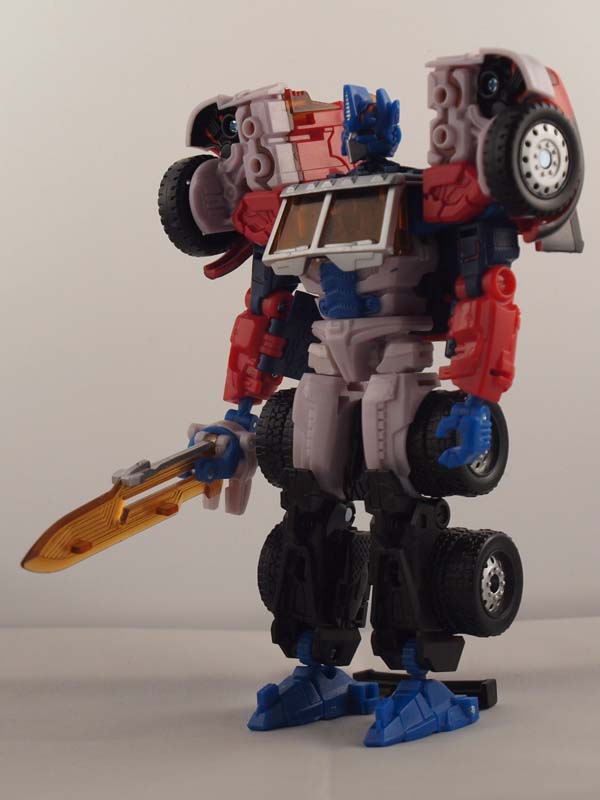 As patchwork as the semi mode looked with the various colors, they all blend together to make a near perfect tribute to Laser Prime's robot mode. However, the head sculpt is a little more Bay-like, and features orange piping. I would be very interested to see how this figure would look chromed out where the PVC currently stands. Just a hint for you customizers out there. 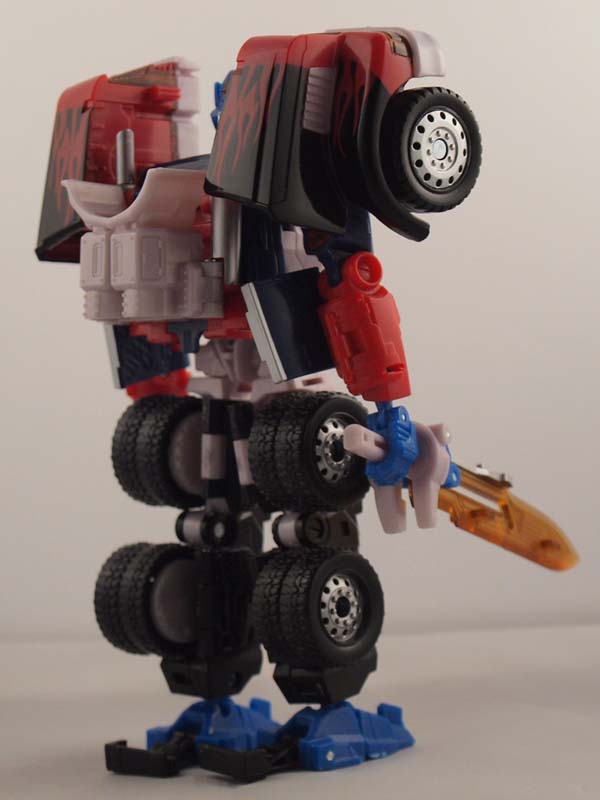 Some might think that this figure might have had more impact as a Voyager. While that might be true, this Deluxe mold works surprisingly well. Articulation is virtually perfect, allowing Optimus to make good use of his sword. 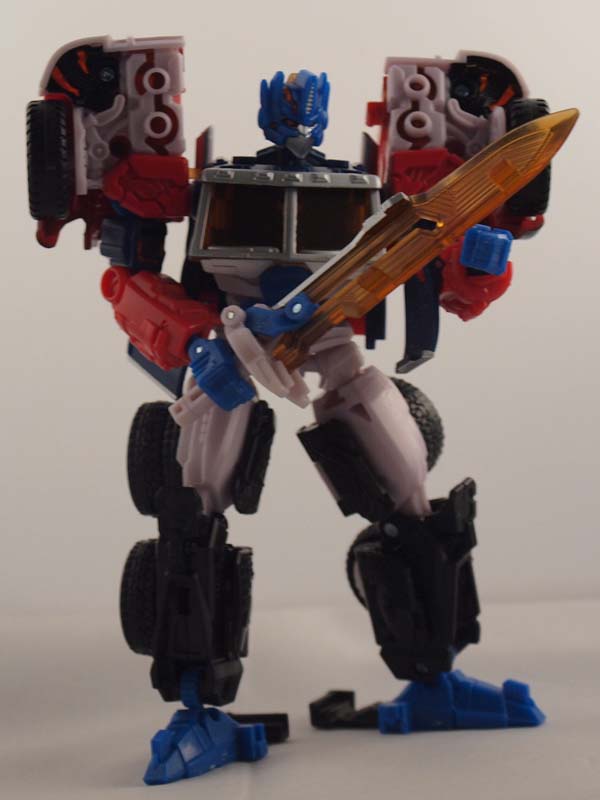 
The wheels behind his legs impose on full knee range. Also, the groinplate tends to restrict full range of the hips. 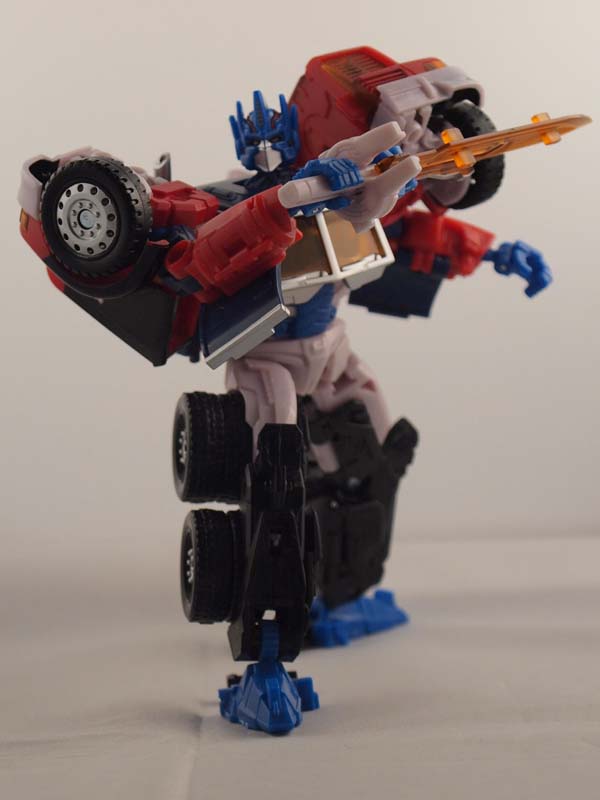 Perhaps one of the best Deluxe Primes ever released. A little more detailing could bring out even more.