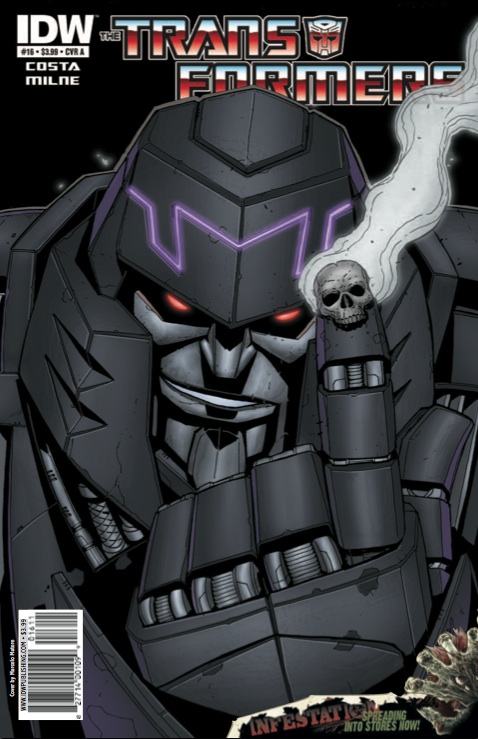 The serious business of this 16th issue of ongoing weighs heavily around my neck as I've sat down to review yet again Transformers Ongoing written by Mike Costa (G.I. Joe: Cobra) published by IDW. Will this be the positive glowing experience that instantly causes the masses to run to their local comic shop and shout for joy as they re-subscribe back to the fold their childhood sentiment, or will it leave us ranting and raving in the streets? I debated on which direction I was going to focus on here hence the heavy weight. Hate to bring the bearer of bad tidings folks… I was only half impressed. Prepare for facing palming action.

I agree at the ridiculous...

Ongoing's greatest weakness is plastered once again in the beginning of the issue, as we have a repeat plot point of the explosion that rattled and killed humans in the Decepticon jail break of Issue 14! (Again, how the humans and reporters are there in the first place is a mystery, seeings how this is hardly a well advertised location.) We then pick up right where 15 left off when Ultra Magnus sent Brawn to seek out Thundercracker and then led the Autobots off into the desert to find Omega Supreme. (Probably still stuck in his cave.) And even though the Autobots have a 3 hour lead on their trek into the desert, common citizens still manage to round up a team of commandos and weapons to go after them, somehow aware of exactly where they are meaning to escape to? It doesn't make sense. And it's amazing that they are able to make a stand against the grossly armed and trained Skywatch agents that are attending the Autobots as they drive off into the landscape. Even if you buy the idea that these common civilians are possibly packing Megatron guns… how would they know where the Autobots are headed when Skywatch intell would be classified to Military personnel only? (Maybe the guards who let them pass the first defensive gate perhaps? I'm reaching here… it never explains really and the only reason why I'm really focusing on this particular plot point is because they continually highlight it. Please don't come back to this one again!) The whole concept is preposterous, and yet this is how Ongoing continues to shoot itself in the foot. Acting like this comic is serious business, in a post apocalyptic scenario where the Decepticons once dominated the planet. It can't possibly work under reasonable and thought out details when you apply basic concepts of how American Military today secures American borders and secrets. It's not the robot militia that is all wrong in this issue, it's the human one. It wouldn't be as big of a deal if it was meant to laugh or joke at the situation, but like I said, Ongoing operates under a realistic and serious premise.

Yes. You are powerful as the Emperor has foreseen, join with me and we will crush the Emperor and rule the galaxy as… oh wait…

Under heavy fire and running with the declining Bumblebee, Ultra Magnus orders the Autobots to evade and meet at Omega Supreme's location. Under no circumstances are they to fire back and risk injuring the humans. Then we switch to Brawn, who finds Thundercracker just in time to save him from a thorough beating delivered from an angered Starscream. Which turns the tables on Screamer as Brawn gets the honor of speaking with his fists finally. Starscream begs for mercy while Brawn demands to know who shot down the Skywatch Transport? And we switch back to the running Autobots to find Megatron reveals his presence and his purpose for coming back to Earth. You'd think his focus is Prime, as issue 7 hinted, but it's not quite what I expected. And the end splash scene of the comic reveals that the Autobots who were shot down are not as out for the count as we have been led to believe. (But I could've told you that they'd be back last issue because Prime is with them and this comic still needs a hero.)

Luckily all is not lost for this comic. It does have a few redeeming elements that made me smile despite the early frustrations I had with this issue. And the pacing isn't terribly bad either. The sequence with Brawn is the best moment I think I will remember for a while for that character. It was the highest part of the comic, although it was right in the middle. The reveal of Megatron wasn't as epic, mostly because we've been getting spoon fed deliberate moments of "It's Megatron" again and again since he reappeared in Issue 13. It's lost it's luster already. Even his ability to instantly dominate his enemies feels a little cliche, again taking itself too seriously. But I swallowed its presentation more than the military debacle of the first three pages. Megatron does feel threatening, don't get me wrong. He is a power to be reckoned with and he easily drop kicks Magus who's been depicted as a Bot who enforces and thus must be feared. But not Megatron who laughs in the face of fear…

On Art duty this issue is the return of Alex Milne (Megatron Origin, Drift miniseries) to transformers. Although he hasn't been gone for too long, it's great to see him back. He gives us active scenes in his composition that both add a dynamic energy and create interesting angles. And his humans look like humans. IDW continues to put their best pencilers on Ongoing, which is the best thing going for it, but a comic can't be supported by art alone. However, I'm really happy to see these great artists utilized! The problem is they aren't getting the best colorists to clothe the work being done by their expert pencilers. Andrew Dalhouse (Nefarious, Transformers: Prime), the current colorist this arc, continues to disappoint. I wasn't a fan of James Brown but his work seemed to be a bit higher than what Dalhouse is pushing out. He failed to really wow me with Don's complex designs the last two months, but this issue he falls off the wagon. I've seen him do better work on other comics, Larfleeze comes to mind? (Which begs the question if he is only doing what he feels the job is worth?) For Ongoing 16 the color is flat, blendy, blotchy, lacks a distinguishable light source (besides this default ambient lighting that evenly distributes over all the characters in the art), and he doesn't even attempt to pick out the details that would easily be done by other Transformer colorists. (I almost wish we had Mr. Brown back.) But here is the problem, why isn't IDW pulling out their best colorists on their flagship title? Where is Josh Burcham? (We haven't seen Burcham color a Transformers comic since Last Stand of the Wreckers nearly a year ago!) Or Milne's regular wingman, Josh Perez? (Although page 1 gives us a nice lovely Perez nod.) Why are they avoiding their top colorists that give us the best looking Transformers comics? Does IDW not want to but their best foot forward, make themselves look the best, so they can sell more comics, and make more money? Dalhouse just doesn't seem like a really great fit for this style of penciling, and it's a slap in the face.

Megatron, you idiot. You still have no idea who's writing you. You aren't the bad guy Costa wrote at all!

This review has been a long time coming, especially since the writing continually shouts its faults like proud battle scars for all to see. I'm not delighted to have reviewed this. But I can't deny that writing (and coloring) under these conditions should be a crime and I'm seriously wondering if Costa's writing career for Transformers is numbered? (And I'd be wondering the same with Dalhouse as well.) I'm not a fan of being so negative and tearing a Transformers comic to bits, or a writer or colorist at that. I love Transformers. I've loved some really well written and brilliant comics that have come out of the franchise. And I'm more than wiling to praise mediocre writing if it plays to the strengths of the story and fans! But I have to be brutally honest when I say I'm not going to be buying this comic. And I don't think anyone else should either. These problems are not to be rewarded. I love Alex Milne's work and I don't want to see his reputation suffer as a result of a bad review, but I haven't felt this negative over a comic since receiving issue 12. Which if I recall, I never reviewed because I didn't want to go there. Well, now I have. (Excuse me while I go and take a hot bath and try to relieve my tension.)

Issue 16 does what Ongoing continues to do… one moment its nice it has the pace and the elements that make it promising. But it doesn't last because the next moment you are face palming and crying to the sky "why?" Why did the writer do that, why didn't editing catch it… as your voice echoes off into the distance. Overly dramatic? Maybe just a little, but dang, what I wouldn't give to have a consistently well written and emotionally satisfying comic!