Wreck Gar hasn't had many appearances since his G1 Junkion days. In fact, he's only been featured once since, as a garbage truck in the Animated series. That's fine and all, but many have yearned for his return to a junkion motorcycle. Reveal The Shield offers redemption, as it returns Wreck Gar to his roots.

Wreck-Gar is obsessed with Earth television, and maybe just a little bit flaky. He communications almost exclusively in quotes from commercials and late-night movies, and the grin on his face never fades, even in the heat of battle. Most Autobots have no idea what he's talking about most of the time, but they appreciate having his axe on their side. 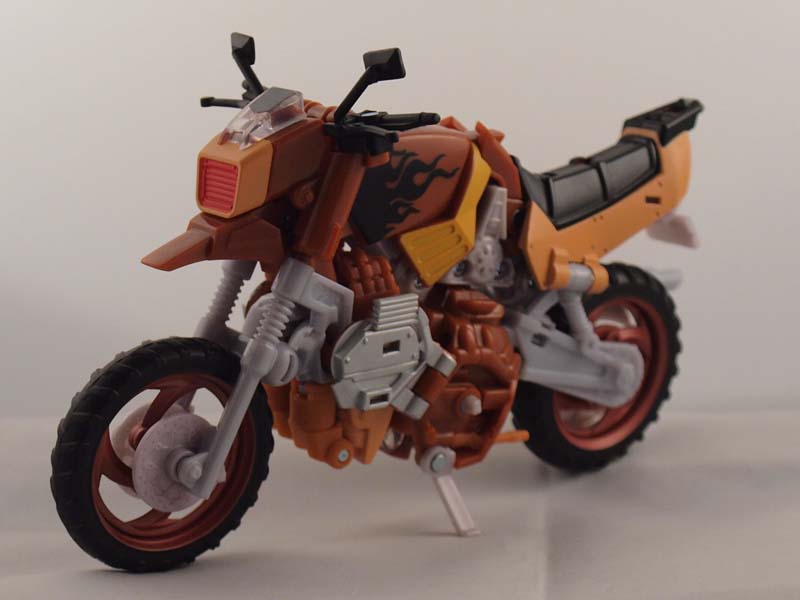 Wreck Gar's alt mode is of an off road motorcycle, similarly fashioned to the G1 release in 1986. There are various colors represented, including rust orange, yellow, silver and PVC gray. There is also a black flame decal on the fuselage. With the great strides in toy technology, Wreck Gar actually looks more like a realistic bike versus his namesake of 25yrs ago. 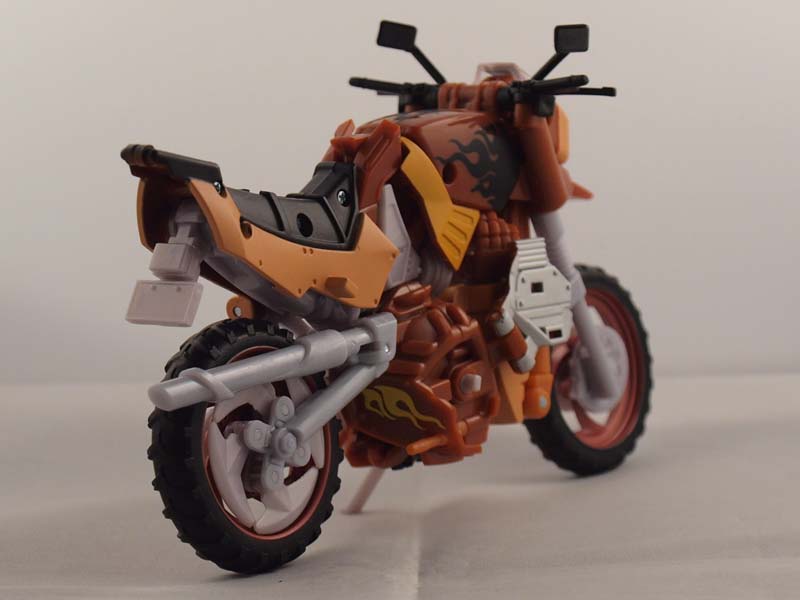 Though well designed, there seems to be a trend lately to leave a lot of the pieces unpainted. The front forks, exhaust and rear chain assembly are left in unpainted plastic. Some chrome or silver would really make this alt mode stand out more than it already does. On the plus side, Wreck Gar is just the right scale so that he can transport other deluxe-sized Transformers. The only realy complaint is the exposed head on the belly of the bike. However, you can turn the head to hide it. 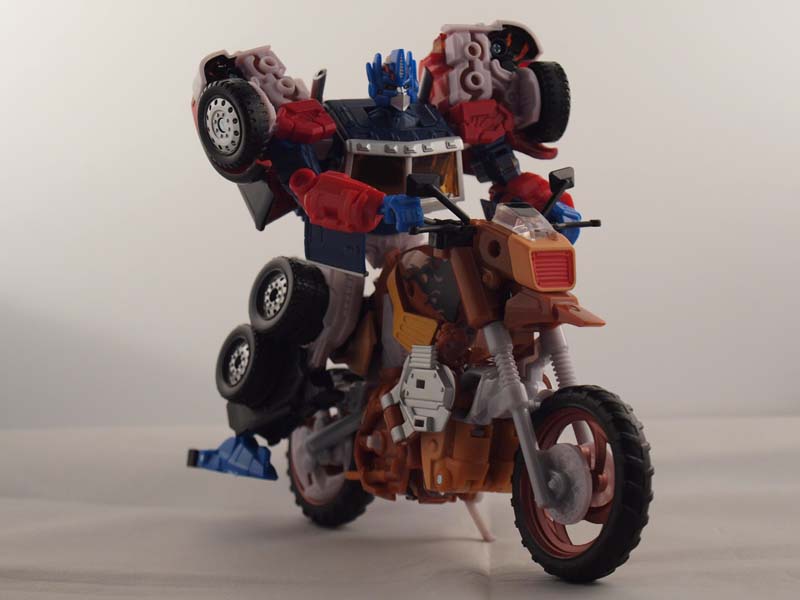 Separate the rear chain assembly from the body of the bike and flip it up 180 degrees so it rests next to the seat. Remove the exhaust from the rear wheel. Separate the front forks from the front mudguard. Carefully pull the seat away from the fuselage. To form the left leg, simply flip the seat in a half moon and spread out the foot. To form the right leg, pull the fuselage forward to straighten the knee out, push up the headlight assembly 90 degrees, rotate teh foot 180 degrees and fold into place.

Straighten the legs so that they point straight up. Rotate the motor assembly so that the flames align to the front of the legs. This makes up the chest. Flip the arms around and join to the chest. Fold out the arms. Disengage the front wheel from the inner fork assembly and pull it forward to rest on Wreck Gar's left arm..

Take the exhast assembly and straighten the exhaust pipe so it forms the staff. Spread out the inner rim assembly on the end to form his 4-pointed axe. This axe can either clip to a tab on Wreck Gar's back for storage (via a horseshoe clip on the staff) or be wielded in either of Wreck Gar's hands. 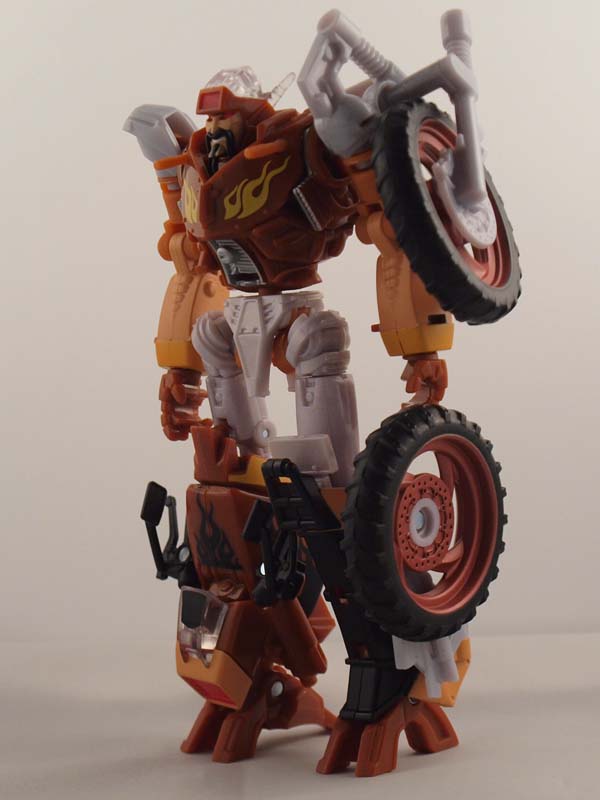 There's absolutely no comparison in robot mode to the G1 equivalent. Though the original was not an assymetric design (other than the wheels sitting on the left), it works for the figure this time around. Mostly faithful to the G1 anime version, Wreck Gar features both wheels on his left side, with the front wheel doubling as a sort of arm shield The eyes are jeweled red with clear piping. 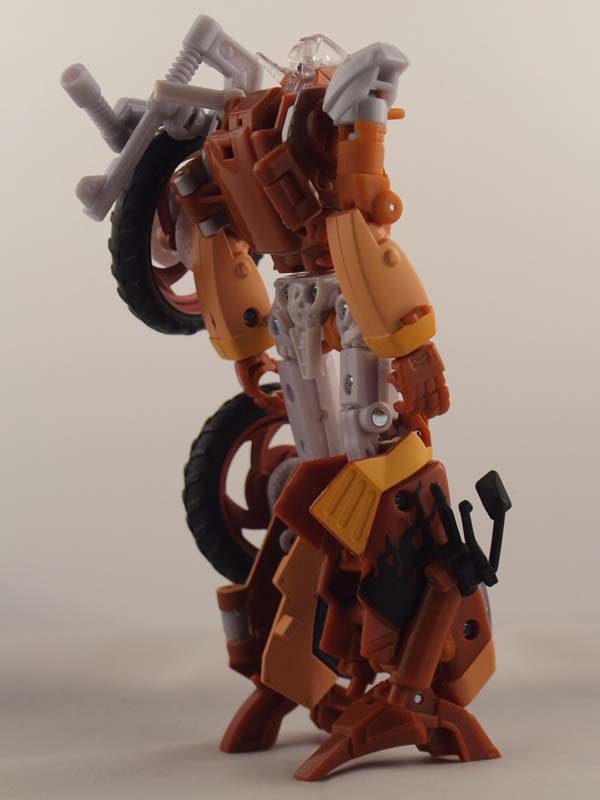 The head scuplt captures Wreck Gar's personality completely, wearing that devilish smile of his. His overall excellent articulation also means he can use that axe of his in various ways. Some might complain about the beard and mustache being made of soft rubber, but hey... how can Transformers grow such facial hair in the first place? If Wreck Gar does anything, it's that he has pushed the bikeformer envelope to an all time high. Sorry, Animated Prowl, you've been dethroned. 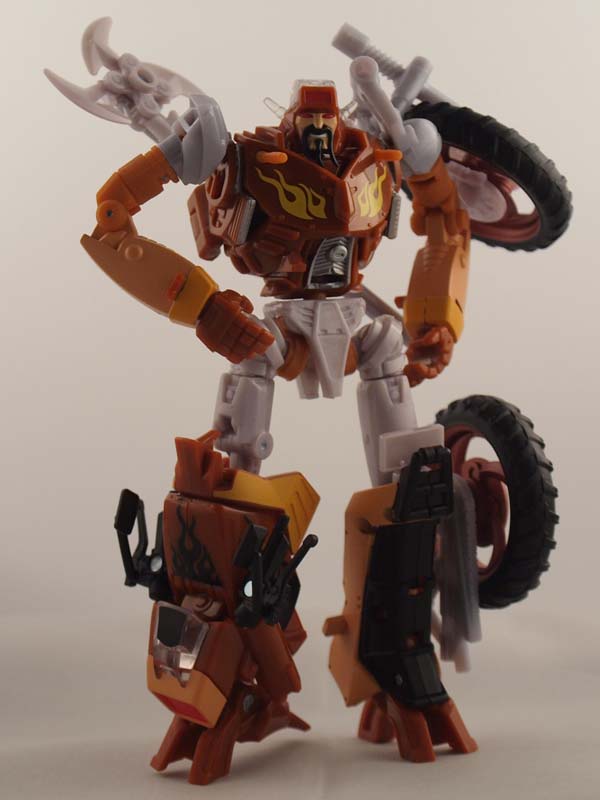 
Surprisingly, articulation is virtually unrestricted. The front wheel will need to be manually reset after posing the left arm. 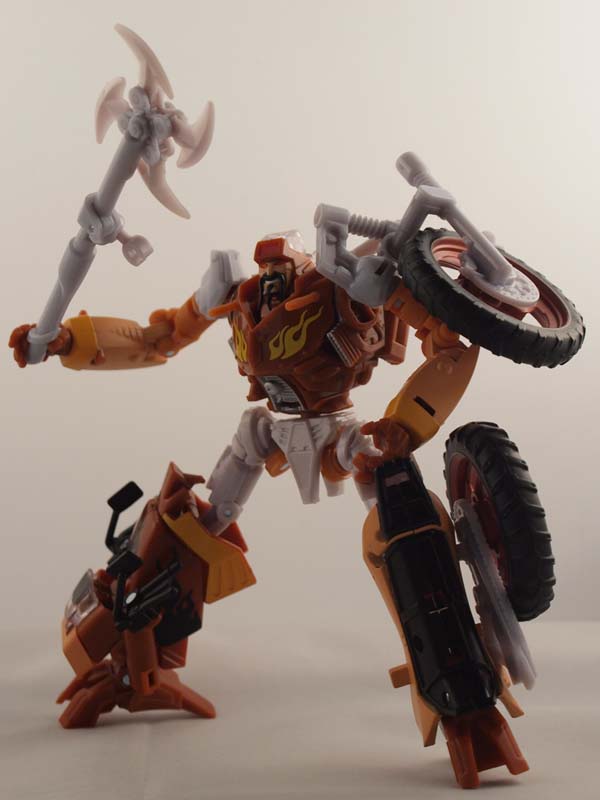 Very slick bike mode, and other Transformers can ride it!
Robot Mode:

Perhaps the best bikeformer ever..... EVER.