Until recently, Perceptor was best known outside of G1 as a minicon combiner team. The Animated series returned him to his scientific roots and even offered an alt mode of a truck. Although the Animated figure never made it to retail, Reveal the Shield attempts to take elements from both G1 and Animated.

Perceptor is one of the most brilliant scientists ever produced by Cybertron. Much of the technology the Autubots take for granted is due to his discoveries. It is rare that he actually builds or invents anything himself, but his insights make it possible for the engineers and inventors to continue the pace of technological development. 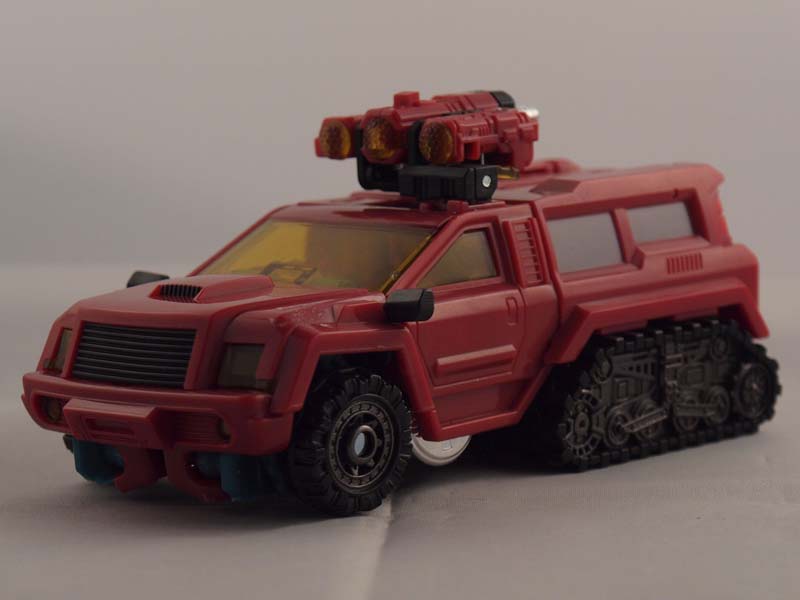 Perceptor's alt mode is officially a "research truck". Imagine an SUV with a halftrack drivetrain. The paint job is solid red, with yellow windows for the windshield and front doors. The rear windows are all painted gray. The headlights and foglights are also done in clear yellow. The license plate reads MR51409, continuing a trend of cryptic messages located somewhere on the figures. I do not know what this particular message means, but feel free to guess (it has nothing to do with the G1 voice actor, Paul Eiding). 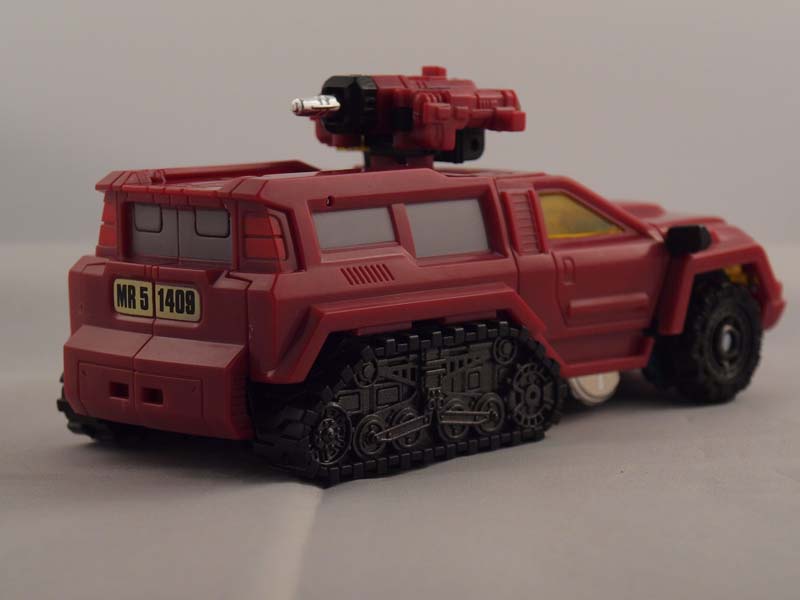 One of the gimmicks of Perceptor is his light bar, located on the roof. A trio of roof mounted fog lights are done with clear yellow plastic. However, you can flip over the middle lamp to reveal his blaster. I have only one complaint about the alt mode. When transforming back from robot mode, aligning the windshield and doors can be an absolute pain. You'll definitely need patience to do it. 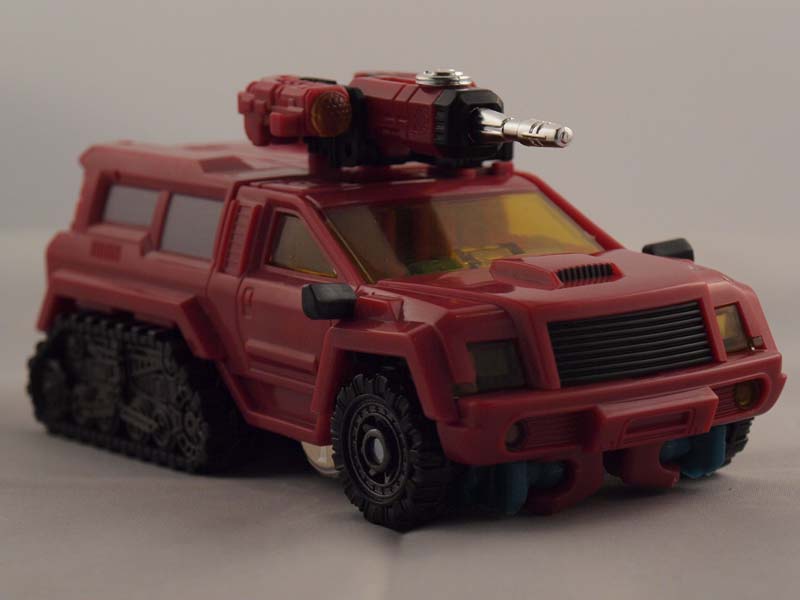 Grab the arms from underneath the truck and swing them out so both arms extend past the front bumper. Push the front wheels in so that the wheels tuck into the truck from the top. Spread both arms out to the sides. Grab the lightbar and rotate it 180 degrees. Pull on the front end so that it extends and dislodges from the rear. Push the wheels the rest of the way into the body, rotating the arms so that the inner tabs allow clearance for the tires. Fold the windshield against the hood.

Push back on the hips to join them to the torso. Push the glass tray into the chest. Find the gray tab on his back and push it up to expose the head. Position the front end of the truck so the hood faces back and the grille points down. Position the shoulders into place and rotate the forearms 180 degrees. Flip the center light on his shoulder to expose the shoulder cannon. Flip the outer 2 lights around the back, then lift up the sight to finish. 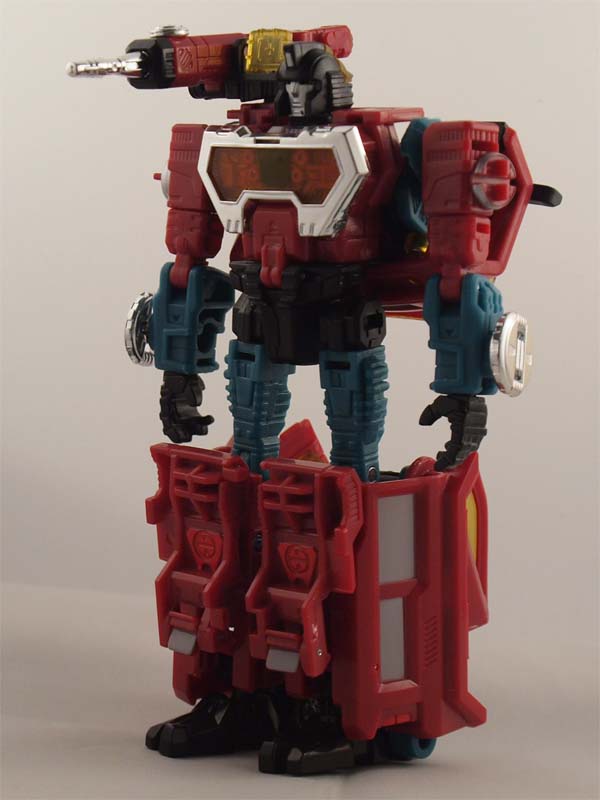 Hasbro has done a phenomenal job of recapturing the G1 essence of RTS characters once in robot mode. The turquoise on the limbs along with the red primary color feel right at home with Perceptor. While the head sculpt is a dead ringer for Perceptor, the expression is a bit lifeless and might remind one of the Universe 2.0 box art. At least his eyes are piped in yellow. 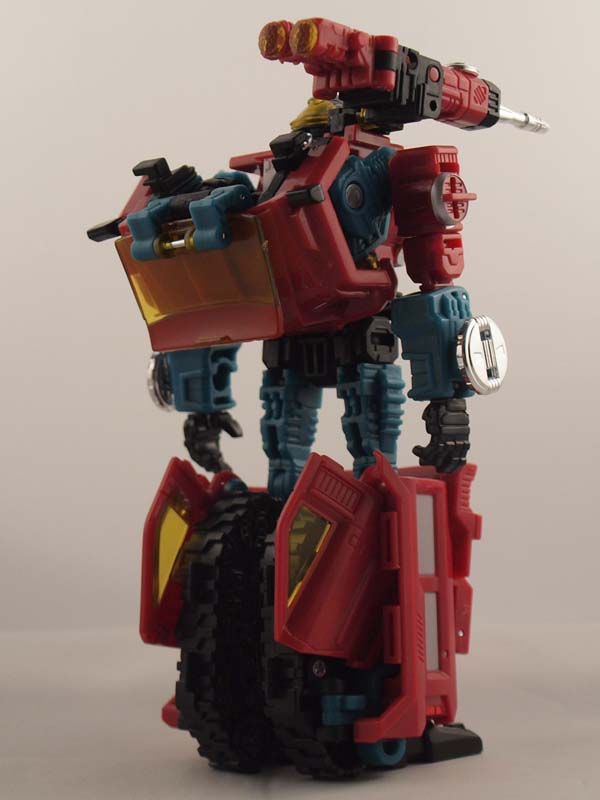 You'll find Perceptor's thermal insignia hidden behind his glass chest. Simply flip the chest down to activate it. Although the 'tray' is a nostalgic add, the shoulder cannon doesn't have proper hinging to take advantage of it. It's as much of a sentiment as the adjustment knobs on his forearms, which serve no purpose here either. One major complaint is that his arms do not lock into place, so minor adjustments to the shoulders will be necessary after posing. The arms stay in place once left alone, but they should have had a locking tab. 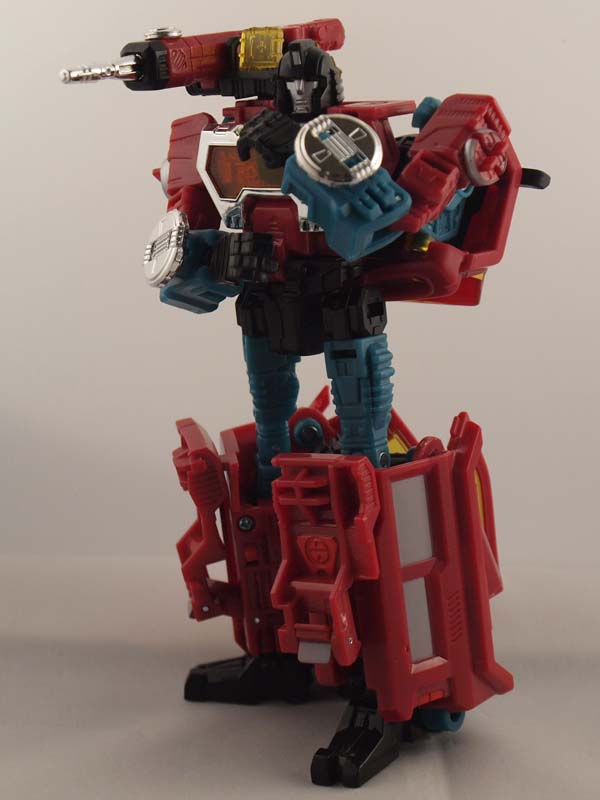 
You might have to move the doors tucked behind his legs to the side to get full articulation in the knees. . 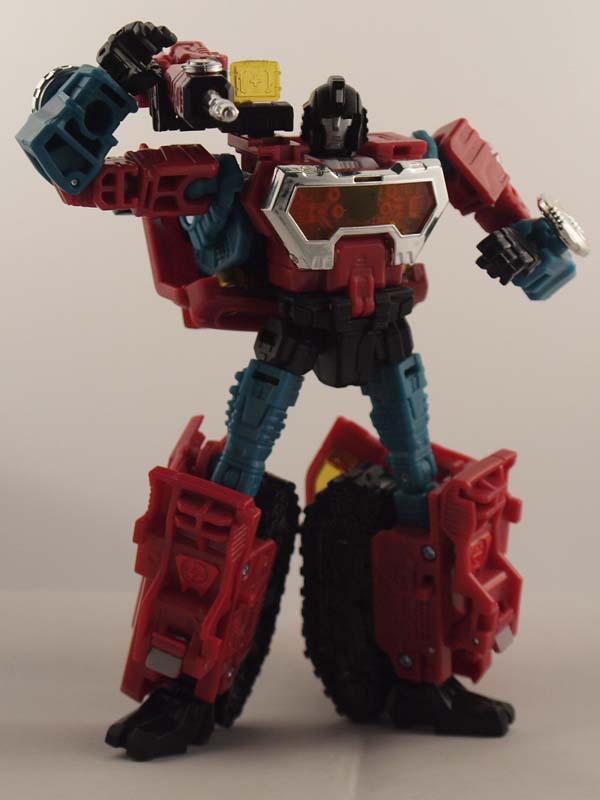 Unique alt mode, but it's a pain to get back into alt mode
Robot Mode:

Slightly limited in articulation, shoulders and back don't lock into place
Overall:

Small issues aside, a nice comeback for Perceptor.