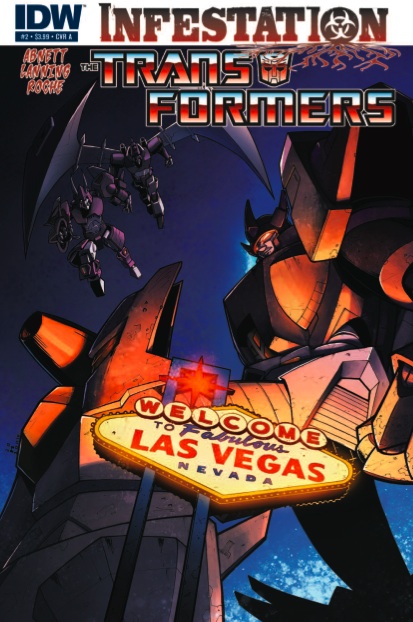 Everything is bigger than life in Vegas.

Two weeks ago, IDW gave us our first bite of Infestation and brought zombies into our big giant transforming robots story line. I was very happy with the first issue and predicted that you wouldn't need to buy all of the Infestation comics to get this story. And I was right. (Trust IDW because they said the same thing too.) Issue #2 written by Dan Abnett and Andy Lanning (DnA) explains exactly what we need to know how Bayonet exists at all in this world. And her role in it fits perfectly into the established rules of the title. Her ultimate demise, makes sense and is relevant to the story's current established laws.

Kup's #2 rule of etiquette: When impaled, shoot female tyrant in the face.

The comic in a nutshell: Britt explains where she came from as she attempts to infests our robot heroes. It does a great job recapping who Britt is, where she came from, how she got there, and what she wants and why. Both Kup and Galvatron become a very important part of this comic because without either of them the Transformers wouldn't have defeated the zombie Undermind. The foreshadowing set up in previous work is beautifully played. But to get the full understanding of the character points they make in Kup and Prowl, you need to have read some of their backstory. (Spotlight Kup, and All Hail Megatron #15) Some comic readers and fans may frown on this. But I personally don't find it a problem. It makes sense to me that a twenty two page comic should build upon the building blocks of past story. It's part of the beauty of comics. You don't have to reinvent the wheel over and over again, there just isn't time and space for it. The writers seem to have a great understanding of what has come before and that shows in the execution of the whole story from the beginning. The conflict hangs less on physical action and more on the rock and a hard place the characters are placed in. When the Undermind compromises the Transformer tech it literally comes down to the decisions of one damaged character to save the day.

More art by Nick Roche and Joana LaFuente. It's amazing to compare the evolution of Nick's work, I know it doesn't turn everyone on. So if you love Nick's work you will again be happy with the designs and craft. If you don't, you won't. Joana dresses Nick's characters and makes them come to life. Again a beautiful pairing I hope we haven't seen the last of. These two never disappoint.

Proof that Galvatron does not play well with others.

I've been sitting on this comic review partly because of circumstances out of my control and partly because I wanted to give it the best review I could considering this is the end of the two comic zombie arc. And I'm so glad I did. I've been trying to define why it is I liked this comic so much. (As opposed to the other Transformers titles which I've been harder on.) What about it, imperfections and all, has got me so pleasantly thrilled to be getting it, and reading it over and over? And I think I've finally gotten down to the heart of it.

I started reading comics because I was interested in the story I heard others talk about. And then I picked up IDW's Transformers comics and became completely captivated by them as I read. Starting with the oldest trades and slowly worked through to the current ones. But then I hit the spotlights and I was completely surprised at the level some of the stories hit. Maybe it was the unique twists or maybe I just ate a little too much chocolate and had a sugar buzz... but my year and a half ago experience of reading those comics for the first time gave me an emotional pay off that hooked me on the IDW Transformer comics. I started reviewing them because I wanted to see more of the storytelling like that. I wanted to encourage others to check it out. I liked what they were doing, where they were going, the conflict, the voice of what each and every writer was giving these characters and the art associated with them.

It's okay Prime, we don't have to leave if you don't want to... just don't start that crying thing again... you know what happened last time...

Why I like Infestation so much is because it has hit a few of these plots I've feared for the last year we'd never see the end result of. And I'm incredibly grateful for Abnett and Lanning for recognizing them and using Nick Roche to give these little gems to us. It's incredible. If there is anything out there that would have endeared the fans to them faster, this was the right way to do it. With a depressed economy and comic sales down across the board... can anyone ever predict a title won't change at the drop of a hat? They took a risk building off of plot points planted nearly four years ago, and I believe it's paid off. And honestly, if it was a choice between leaving those threads hanging forever or tying them up now, I'd go for the tying them up. 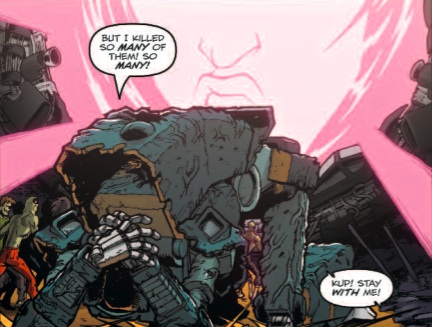 There's a lot of butt kissing in this panel.

Zombies are in this comic but they don't take it completely over. It's just the right amount of zombies we need to realize this is a zombie story but it's not too over powering. (And they walk this fine line very carefully. Enough so that I think the fans will tolerate it as I have.) The right balance has been struck. We understood from the beginning the zombies wouldn't be making a huge or lasting impact on the Transformer universe. So it comes as no surprise when they are defeated at the end. What I didn't see coming was the use of plot material we hadn't seen in a long time. A pay off was cashed in here. And the best point, Abnett and Lanning have earned my respect and excitement for their next story arc in Heart of Darkness. (Which comes out next month.) I encourage every reader or fan within the influence of my voice or my reviews to break down and get this two issue arc. Not only just because it's zombies and Transformers, not only because it wraps up the Kup and Prowl arcs. But because it sets up Heart of Darkness as well, and this creative team (writers and artists) have thoroughly earned it.

This title had a big bill to fill. It was a needed boost to a starving audience. Whether we had that expectation or not, it's dished up a fine meal. And I've been satisfied with a good story I can get behind and recommend fans to run to their local comic shop to get.