Sourge may have been the strong and silent type in his G1 figure bio, but that wasn't the case when it came to the anime. He recently cropped up in the defunct Titanium series, but the results were less than stellar. Hasbro gives him another go at an update with the Generations line.

Little is known about the origin of the immensely powerful hunter known as Scourge. he rarely speaks, and never reveals his secrets. Few who encounter him survive to tell the tale. Most often, he descends on his target from the sky, lays waste to all who oppose him, and disappears back into the darkness of space. 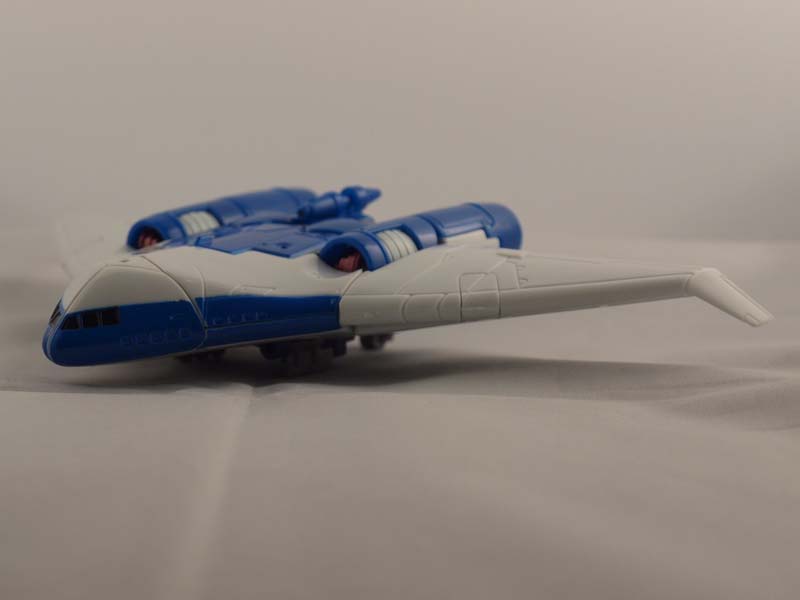 Scourge trades in his space hovercraft for a more terrestrial looking stealth jet. The jet is loosely based of the B2 stealth jet. The fuselage is all white, with blue engines towards the back and a blue nose area. 6 black windows are built into the nose. You'll also notice a third engine in the rear.. 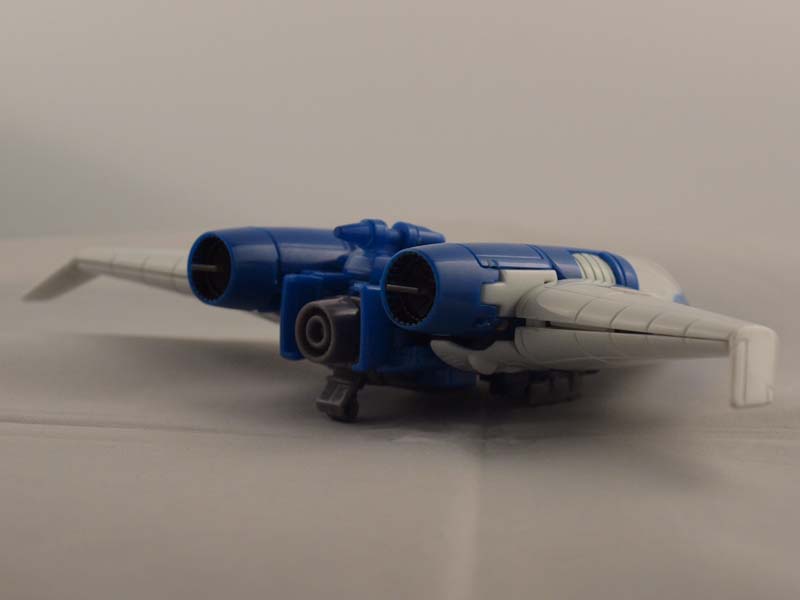 Scourge features 3pt landing gear, with a set of wheels at the front of the fuselage and a third wheel at the rear. Unhinging the third wheel is quite a chore, and might require some gentle persuasion. Overall, the jet is very streamline and all robot parts are well camoflauged.

Bend both wings downward. Break away each half of the nose assmebly, then pull forward. Make sure you also extend the knees out when pulling on what will be the legs. Push on the inside of each nosecone to fold out the feet. Twist each leg so the feet point to the belly of the craft. Flip back the middle engine to expose the head. Flip the wings around 180 degrees so the round hole on the bracket fits into the engine now on his back.

Pull on the head to extend the neck. Pull out the side engines, then push back on the blue mid-section to expose the abdomen. Lift the front blue section so you can rotate the waist 180 degrees. Cantilever each wing inward. Flip up the engine exaust caps on each side engine. Bend out each front section of the engines 90 degres. Pull on the flipped out assemblies to extend the upper arms. Spin the engine mid-sections 180 degrees to expose the shoulders, then spin the arms around to their original position. Push the arms back into the shoulders, making sure to align the exhaust cap to the shoudler. Spin the forearms 90 degrees inward to expose the elbows. Use the handle behind the forearms to expose the hands. 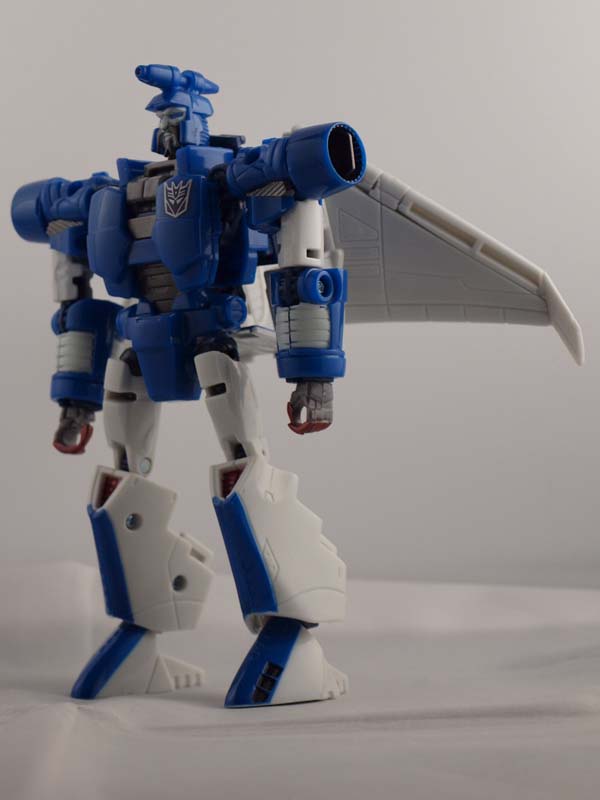 This figure easily tops the Titanium figure and gives the G1 model justice. The color scheme is still predominantly blue and white, with some gray thrown in. The hands are accurately painted with red claws, although the fists are molded closed. The head sculpt is a work of art, and features both jeweled blue eyes and blue piping. 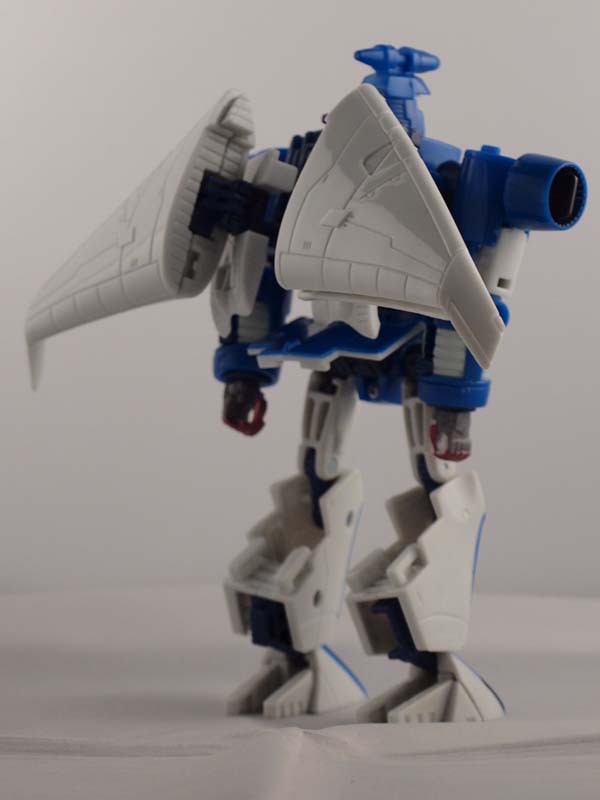 Weapon storage is in the wings. Peeling the backs of the wings upward reveals the weapons. Each weapon can be independently arms on either fist or, if you prefer, combined to form a more powerful weapon. There's hardly a thing to complain about with this figure overall. G1 purists might find fault with it, but it's perhaps the most accurate G1 Scourge we'll ever get to see. 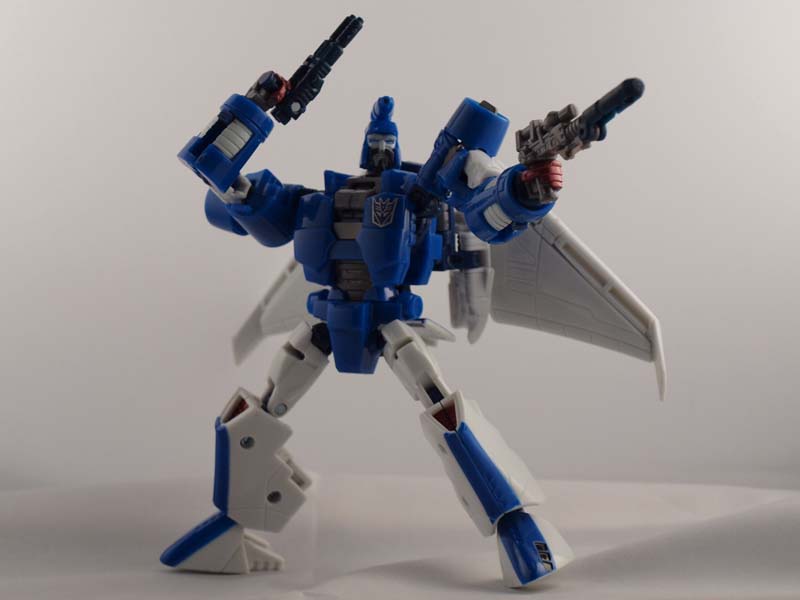 
The hips are hampered by the thighs slightly, so you can't get full range. 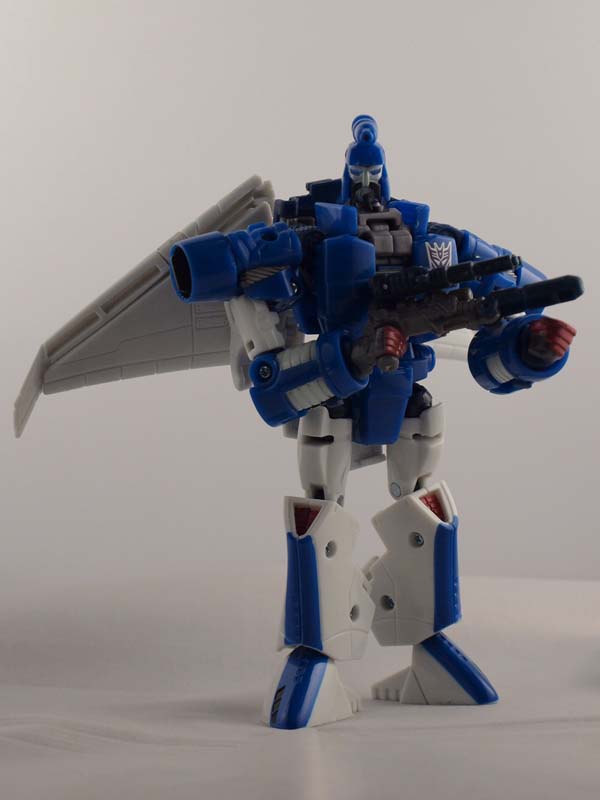 Well jointed and very faithful to the G1 counterpart.
Overall:

Scourge finally gets his due.