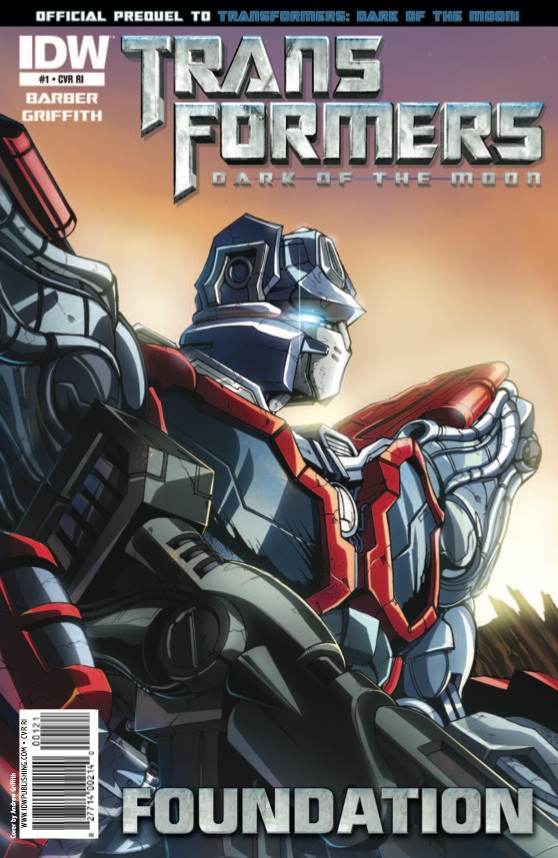 "They can take our lives… but they can never take OUR FREEDOM!"

The beginning of the Transformers 3 Dark of the moon prequel comics began this last week. And the writing has been handed over to a very capable John Barber who wowed us with his handling of Sector 7, his first Transformers comic, which ended a little more than a month ago. He's not just writing a tie up story, but both the prequel comics to the movie coming at us in just a few short months.

If you've been following any of the first opinions of this comic, about how it has undone everything that has come before, you have been mislead. So far, nothing I've read has lead me to believe John Barber would write his carefully crafted stories in that way. The man does his research when he sits down to make story points make sense. He proved himself capable in Sector 7 to bend over backwards and make "The Ghosts of Yesterday" novelization fit into the comic continuity. I find it hard to believe he'd undo all that the fandom loved about Defiance, the prequel to Revenge of the Fallen. Let my voice be one of reason… give this comic a chance! You'll be pleasantly surprised at what it's trying to do. But you're gonna have to trust this writer. (I know, a very rare commodity these days given the track record of IDW the last year.)

Optimus has a moment of thunder, wait for it… lightning will follow...

Foundation issue 1 starts off not defining where it fits, yet. It could be before Defiance, it could be after? I'm not exactly sure yet where it takes place. (Like I said, I trust Barber to get there in the near future. Hold on to your hats.) But it quickly establishes a voice and a conflict, and then throws us into a flashback during pre-Defiance times. When Cybertron was in the throws of civil war after the Primes suddenly disappeared. Those left fractured into tribes and fought over the depleting energy on the planet. The AllSpark became a myth and legend. All but for one Bot named Sentinel Prime, who believed these legends and myths were true. Sentinel was the mentor to both Optimus and Megatron. Binding them as brothers. Together they found the AllSpark and through studying the legends they found how to use and recharge it. No one believed in Sentinel, except those rare few like Optimus and Megatron. And the population believed less about Sentinel's plans to bring Cybertron back to full functionality. To the point of standing in his way as he and some of the best minds of the tribes set to repowering the AllSpark. But they prevailed amidst the conflict and dawned a new era and literal day on the planet. Sentinel united them, but Sentinel wanted Optimus to lead them. When the flashback ends it is apparent that a falling out happened because Optimus is on his way to kill Megatron, no matter the cost. And he is acting in a way that his troops have never seen him before.

Before Flatline experimented upon the young… he birthed them… creepy!

I wouldn't say Optimus is being painted as blood thirsty but it is apparent that this tale, at least for the opening, means to establish how these two characters become opposites. Further explaining what we already know, they become enemies. It's a much younger Optimus and maybe a much younger Megatron. Until we've seen more of what this story means to tell to be certain. But the pacing of this story is great. It hits a great stride and the comic closed on a great hook. I can't wait to read the next issue, it will be a long few weeks until #2 is in my hot little hands. But I will be making sure to get these comics in hand, you can be sure of that.

Andrew Griffith(Defiance, All Hail Megatron #14) and Priscilla Tramontano (Spotlights Jazz and Metroplex) are a wonderful art team. Don't judge the art within by the Brian Rood cover, because the interior is exquisite. Griffith illustrates his masterful handle on the movie-esque designs and Tramontano dresses them wonderfully. In fact, I'm very impressed with the atmospheric handling on the environment. The characters are placed in rain, sun, and night environments and they all read very clearly. The lighting really impressed me. And coming back to Griffith's designs… movie styled robots can be detailed to the teeth, yet not one character is lost in the panels as I've seen some comics struggle with in the past. Both a testament to the penciler and colorist for working in conjunction to each of their strengths. When it works, it sings. The art is a big thumbs up for me.

And the lightning… as Cybertron brings the rain!

And that is great because the writing is also a thumbs up as well. Enough that I've rated it a 4 out of 5 stars. So if you've been holding off to get this one, you've underestimated. Foundation has started off on the right foot and I predict it will continue to hit the sweet spot as we continue the read. Next time you step into your local comic shop, you may need to have a second look at this one.