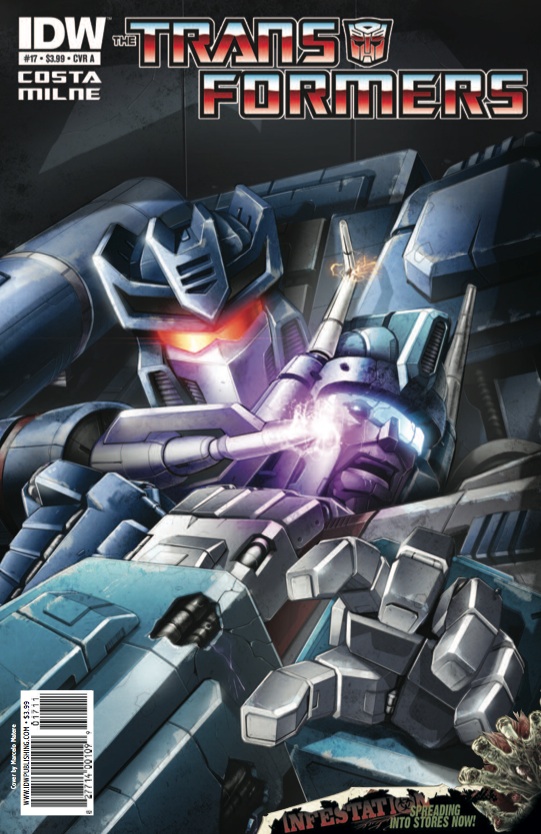 Say hello to my little friend as I stab your eye!

Remember a few months ago when I compared Ongoing to salad? And how I said that we've been hungry for the more weightier and filling aspects of story to satisfy the audience… well, look no further. Ongoing is heading on the path, if it isn't already here. Granted when you open this comic you are going to see a lot of art and colors and some thrilling story pieces that are gonna get you either outraged or intrigued. But this issue has hit an all time high this go round. Despite small concerns and a few frayed edges, it's been happily received this week by this reviewer.

Our fallen Autobots are making their way to the New Mexico base and receive a message from Megatron alerting them to Ultra Magnus's fate and the Decepticon leader's presence on the planet. He addresses the whole message to Prime and predictably Prime obeys. The following conversation that ensues, although very familiar and cliche, is also very fun and brings back the arrogant Megatron we've all grown to love and hate in the past. And Optimus plays right into Megatron's game only to do the unexpected, unravel Megatron's game and survive to see another day. While Megatron, as usual, escapes. What Prime doesn't foresee is the surprise attack from behind when things go awry for the rest of the bots. Giving Megatron the winning battle move he so perfectly set up. The battle in favor of Megatron, but the war hardly over for Optimus.

Oh the irony that Prime should tell Megatron he's right… when in fact… HE IS!

This seems very cryptic, and on my first read it was easy to miss all the underlying themes this issue hits. But when I compared this issue to issue 1, 7, 8, and the previous three issues to 17, an interesting thing happened. Perspective. While we haven't had Megatron on earth until this arc, he's been planning this for a while. And issue 7 gave us that peek. He knows humans better than Prime does. Which makes perfect sense because he did conquer the planet for a time and played on fears and learned. And he is playing wonderfully off the fears of the humans, planting the seeds of unrest, delivering the message in a form that the humans won't readily recognize. Manipulative to the teeth. But as ongoing has been illustrating over and over again the treachery of humans, it's 100% believable. And the message is in a form that the Autobots can't defend against any other way, but through the efforts of Bumblebee.

The secret power to state the obvious… every time!

However, in all of this Prime has misjudged how being around the humans would effect the Autobots both in good and bad ways even he couldn't predict. Which is where Jazz errors in the end. Tipping the hand directly to Megatron, souring the Autobots validity in a very public manner. And these seeds of unrest will now spread like wildfire. Well played Megatron! Well played Costa! The effects of this issue are sure to be felt long after we are finished with this arc! (And will spark conversation throughout the fandom for weeks to come.)

So now the stage has been set… Where will 18 place us? What is Megatron's next move? What will Prime do? And will we understand in the end the reasons why Prime had them all stay there to begin with? Or was he just desperate to gamble and change the war, only to have risked and lost what it was that made them Autobots? It's a whole plot of grey, but its very filling when you contemplate deeper. We've praised other titles in the past for having the guts to take the white and black themes and move them into grey areas. We've been calling for months for deeper substance to be brought into Ongoing and now we have it.

There are some very familiar faces in this crowd, Caesar Millan, Josh Perez, some podcasting folks, my next door neighbor, and that little girl down the street...

Lastly, Alex Milne continues to prove he has the right to be drawing and giving us more comics. He builds the Transformers world with his chameleon style and never misses a beat. But this installment has given us two colorists, Andrew Dalhouse once again on the job followed by Romulo Fajardo. The first half of the comic is colored by Dalhouse, the last half Fajardo. There is a subtile difference between the two but the shift isn't as extreme as what you'd recall the art shifts in All Hail Megatron. Again, it's not as flashy and deep as we've seen Milne's art dressed in the past like the Drift series which was less than six months ago. I found the new colorist's style preferable.

While this issue comes at the eleventh hour for some, I have to applaud Costa's willingness to risk a story like this. It's full of guts and I hope the end has the results IDW was banking on when they green lit this story to begin with. It's not often that you tell a story where the antagonist turns out to be right, undermining the protagonists whole journey to begin with. But if they have a direction they plan to go after this run has finished, they are definitely on the path to sending us there.