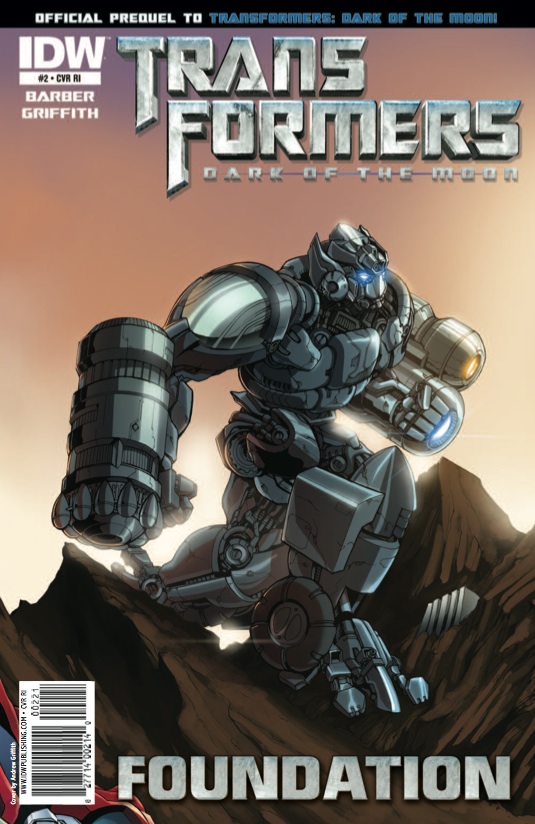 Two of four covers that fit into one complete panel, nice!

Foundation is upon us this last week as it hit the comic shelves of local comic shops everywhere. Though my review is tardy this time round, let it not be said that I did not find this comic enjoyable in the least. This issue is another winner and definitely my favorite to date out in the movie verse comics.

Issue two is the piece that continues to weave the tale of the two opposing forces of the Transformers Universe. Optimus and Megatron, but it does so in the voice of Optimus this issue. Optimus was slower to learn the things which came to Megatron quickly. He didn't believe like Megatron did. He knew of the Legend of the AllSpark, Sentinel taught him more of the stories, but he also learned to weigh facts and seek tangible proof. He doubted his role in that age old story and because of his doubt he declined the opportunity to rule solely as Prime. The mid point of this issue, Sentinel sets up two forces of leadership for the planet to unify the population. The Autobot Science Division and the Cybertronian Defense Force, two separate bodies working for a common goal. Optimus over the science to guide their present, Megatron over defense to protect their future. It is clear by the end of the issue how they both start to depart from each other setting up the level of betrayal that predictably will come before the end of this series, as we all know it will. I'm not certain to say that there won't be a twist or two along the way, but given we have seen the movies and later tales involving these two foes, the falling out is definitely the focus of Foundation.

Proof that Starscream is a germophobe… and Megatron is unclean.

This character piece shows excellent use of the passage of time, how Optimus allowed his trust in Megatron to cloud his judgement and literally lose himself in the work he focused on. But it also has what seems to be excellent set up for what is to come as well with the other characters we are familiar with. And why wouldn't it? Barber is writing the rest of the movie verse stories this year, it's great to see him craft his tale and have full reign within the bounds that have been set previously. We will be sure to be rewarded well past the movie as these comics are collected in trades and we reread them this summer. For now, if you miss reading these issues you'll miss out on some of the little nuggets that will tie the whole story together over the next four months.

This comic gives us great moments from Ironhide, the fembots, Starscream and Shockwave, besides our two main characters. It gives more information about what lore the Transformers grew up with and the coming back to the tales they departed from in the last issue. It literally becomes a 360 for some of the characters and I believe will continue on in issues 3 and 4.

Optimus being diplomatic about not knowing Elita's sisters existed at all…

On art, Andrew Griffith and Priscilla Tramontano. Again a great piece of work from both of them. The coloring is superb, great use of the atmospheric. The depth of the backgrounds and lighting. The focus of the panels are easy to follow. And comparing Griffith's Defiance work with this series you can definitely see how he's upped his game as well. He's streamlined the designs and made them more functional, definitely learning from what he's done before. I really appreciate what the two are doing here and it hasn't gone unnoticed. All their hard work has paid off and given this story the harmony to highlight what the story is already giving the audience.

If you haven't had a chance to pick this one up, make a bee line to your local comic shop this week and make sure you get your copy now, or order it before supplies are out.


Check out the Underbase interview of John Barber! Now available at the provided link! If you would like to hear a more in depth, spoiler review of this comic. Stay tuned as the Underbase comic review podcast reviews comics weekly!

When Megatron first usurped power and Optimus let him! Like taking candy from a baby...