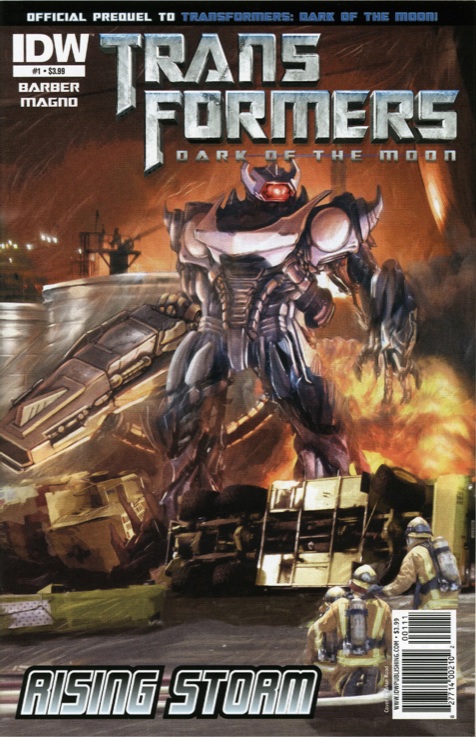 While this comic is about to release it's number two issue, I couldn't let it get away without taking the time to let you know what i thought of the first issue that has been out for a few weeks already. I haven't intentionally ignored it, so if you haven't picked it up because I've not said a thing, try and get yourself a copy as soon as you can.

This series is written by John Barber (Sector 7) teamed up with Carlos Magno (Tales of the Fallen, Nefarious) and new colorists Aburtov and Graphikslava (who've been working on the IDW Dungeons & Dragons titles). Placemarked right before the movie it reveals Shockwave's presence on Earth and Megatron's hand in the coming storm that is rising for the Autobots. Starscream is reigned in by a very capable Shockwave. The bots who were captured by the Initiative in Nefarious have rejoined their Autobot brethren with NEST, but they are still a bit rattled from their capture. Barber expertly pulls characters we thought were gone for good right back into the story plot and I'm happy to see they aren't as gone as the TF2 movie implied. (Giving Michael Bay the finger for ending characters thoughtlessly!) As the conflict starts to rise in temperature, a new ally flees to squeal to the Autobots in the form of a new little character. But that's only if he doesn't infuriate Bumblebee first.

Shockwave, telling us what he really thinks of the troops.

Carlos Magno delivers a great action packed issue. While I wasn't as thrilled with the Nefarious work I reviewed in 2010, this go round I have to change my tune. I love what the colorists have done to Magno's work. And it's made me change my mind about this artist. With the right colorists on his designs, Magno's work is pretty satisfying. He takes both simplified and realistic and joins them in the middle, but it's the action scenes which are amazing! While I've seen a sample of both what's weak and strong about his style, I have to admit I'm definitely impressed with what is going on here in this comic series this go round. It may not be for everyone. But this time, it has a green light from me. And I hope to see more from this coloring duo in the future. Especially if they come back for more Magno. Get me some of that!

Shockers doesn't waste words and gets right down to business. Bot of few words...

What I liked about this comic was the nice build for Megatron. Certainly we know he's got to be in the third movie. What's Transformers without Megatron? However, Revenge of the Fallen didn't really treat Megatron the way I would have liked to have seen his character be treated. This comic seems to suggest that the calculating and weighted antagonist is back. And I hope it continues to hit that stride. So far issue one has my vote. Although Megatron doesn't make a personal appearance, his presence is still felt in Shockwave's actions. It will be interesting to see where Barber is going with the build up to the movies.