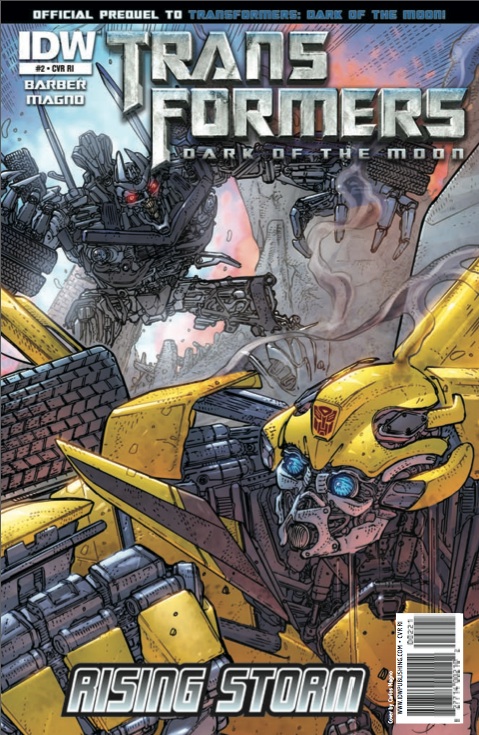 The next chapter in the Movie verse arrives tomorrow in comic shops, and the word is in it's favor. It's John Barber and Carlos Magno at their best, telling a story to lead us into the blockbuster movie this summer. And this issue does not disappoint. There are reveals, character moments, a laugh or two, and even great dialogue. The conflict continues to build.

Issue #2 of Rising Storm is a focus on Shockwave's point of view. How he stayed on Cybertron to battle the Autobots, yet somehow heard the cry of the AllSpark when Megatron was distracted with his quest to find it himself. Having the means and the knowledge given him from the cube, Shockwave left on his own quest which landed him into the frozen tundra of Siberia where he's been in stasis lock. It's easy to draw the parallels between him and Megatron in this issue. Because they've about had the same experience just on different time sequences. And it's Megatron who released him. The brain unit, Brains, now in the company of Bumblebee and Sam Witwicky brings a mass of Decepticons upon them as they try to recapture him. In fear for their lives, Sam sends a distress call to Optimus Prime, who in turn dispatches Autobots to help. Just in time to save the day, the distraction that Megatron intended the attack to be, is a success.

Shockers still must learn his place… go ahead and tell him what a failure you've been Megs… don't be shy...

Again, Barber sets up a percolating conflict while giving us lots of explanation and details to explain how Shockwave arrived on earth. However, I still feel pulled into the story through the character interactions. As in issue one, Megatron's role in these comics continues to prove that he is the mastermind behind all the conflict and he means not just to kill the Autobots, but to destroy them. And he's going to use everything within his reach to accomplish his goal.

Once again Carlos Magno's characters aren't lost in the panels like they were in Nefarious. And they are much more recognizable. The writing plays to Magno's strengths. And the colorists continue to be a good fit for this style of art. They give the pallet variety and light the robots adequately. The human faces seem a tad too blend-y to me, but the focus is most definitely the robots, and the human presence doesn't detract from that.

Wheelie professes his undying love for Sammy… oh boy! Now there's no girlfriend to save the day.

I'm still along for the ride on this comic. There are definitely a few more reveals I haven't spoiled and it's in the little details I find a deeper and more complete storyline here. The moments in the Decepticon camp and the Autobot camp. Even though the panels are packed full of characters, Barber still manages to keep my interest in the ones that matter but still featuring the huge cast sitting in the backdrop. He also expertly places the relevant information in the right place to keep it all in continuity. Again, all talents we have seen him use in the past projects he's given us. This feels like Barber at his best, a consistency which is welcomed by this reviewer. Still along for the ride, again another winner for me.