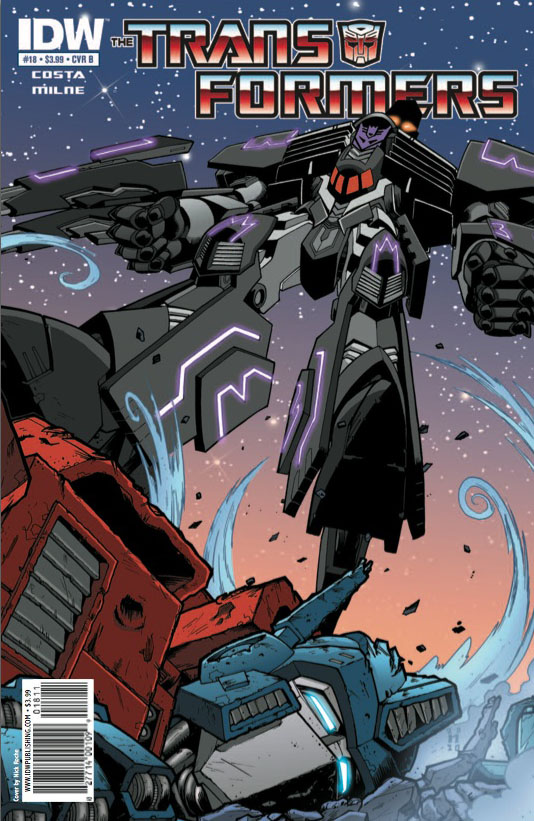 Coming in for a landing… I give you PRIME'S FACE!

Doubt creeps like a creature in the night, eating away at the strongest giant. Funny how an idea can be so powerful it can make nations and cause great leaders and heroes to fall.

Cybertron itself was built and destroyed because of an idea. Mike Costa was careful to write this in the Ironhide miniseries last year. And this is the issue that starts to pull together all the threads, all the little subtile hints and phrases which have been dropped over the last 18 plus issues where Costa has had the opportunity to write. And it all comes down to a moment in Issue 18 when Megatron turns himself over to the Autobots after giving Prime a thorough beating. WHAT? Really??! Wait for it… this is where it gets incredible.

I sense the beginning of a pissing match.

Now detained within Omega Supreme, threatened with being torn apart if he tries to escape, he laughs arrogantly in Primes face, as he lays the final ground work to the ultimate end of Optimus Prime. The ultimate attack on his ideals, principles, and everything he's believed in. That which has put these two characters at ends since the beginning of the civil war which tore Cybertron apart.

From the beginning of Ongoing we have seen a vulnerable Prime. Fans have described him as EMO and way too emotional. Being a Prime fan myself, I've had a hard time accepting the position IDW was putting him in. However, that being said this is part of the payoff this story has been working up to. Its not like the external conflict, this is the one which is going to eat at the heart and soul of this character as we prepare for Chaos. It may even be an important plot point. And I'm impressed. I means the vision of where this story has been going from the beginning, the whole point is close at neigh. And the world doesn't end with an explosion between to opposing characters… it may be a whimper.

Translation: I felt that! Shockwave said I would be impervious to ALL weapons! He'll be hearing from my lawyer!

What was disappointing about this issue, is the external conflict. This is the ending issue of the third story arc. The two before it have had their highs and lows… this issue is by FAR the strongest of them to date. In issue 17, Megatron repeatedly taunted Optimus… "I could crush your spark in my bare hands", "I don't want to accidentally kill you", and "I could field strip you like a rifle." "So do it then?" Yeah, I agree, do it Megatron, don't just talk about it! Those words are promises… put some action behind those and show Prime (and your audience) how you're going to pwn him!

As the final fight builds we anticipate the outcome to be epic between these two opposing characters. But we are denied yet again! We see the consequences of that fight. But the emotional payoff of how Megatron is able to run circles around Prime and yet NOT kill him happen off the comic screen. It was the biggest frustration of this issue, the fact the building tension does not release where it needed to be. There's room for it, and in fact between page 12 and 13 feels like the best place to put it. (Did I mention that this comic is one page short?!?)

The shocking truth… Prime is a cross dresser!

Granted the internal battle between these two characters is a stronger plot hook and it will have further reaching implications. But the external conflicts are just as important. They are what continue to hook readers and move them from one issue to the next. But it can easily backfire if you allow the level of reader frustration to overflow by failing to follow through with what you promised in your build up.

I believe had this battle between these characters taken place, it would have added an even stronger response to the ending internal conflict the comic hits a few pages later. Does it end my overall enjoyment? No. But again, I'm frustrated about something which breaks me out of the story and that can't be a good thing. I will remember this issue not as the epic statement it was meant to be, but as the one which promised a fight but delivered a page less.

Prowl… I know you were in my office. I know what you saw! And I know you took something!!

Alex Milne continues to deliver top notch line work. I miss the breakout images he usually uses in his layouts, he only had one small one this comic. But his handling of Transformer technology, again outstanding. He really does his best to build the world well, and the robots convey well. Andrew Dalhouse continues to disappoint. The handling of the environment, the desert and rocks, lighting temperature and usage … coloring just looks flat. Some pages look like they weren't even finished being colored, or characters are colored wrong. It just does not do Milne's work justice. (And the blur lines that show movement failed to follow the lines Milne drew in.) It is my sincere hope that IDW will find a more worthy colorist for the next six issue arc, Dalhouse does not make their comics look the best they can be.

What will Chaos bring? This is one reviewer looking forward to the beats it is promising already in this issue alone. I just hope when it is upon us the mistakes they've learned along the way don't hamper the story and take away it's thunder.