After 2 years of Revenge of the Fallen, we are finally moving on to the third (and perhaps) final chapter in the Bayverse known as Dark of the Moon. While it looks like many of the core characters will soldier on, there are several new characters appearing as well. Perhaps one of the most anticipated of these characters is Sentinel Prime. Thought lost long ago, Sentinel Prime has now returned to try and put an end to battle.

Sentinel Prime is a legendary warrior, thought lost long ago. The strength of his will and the power of his sword are spoken of in reverent whispers by Autobot and Decepticon alike. Now that he has returned, the final defeat of Megatron and the Decepticons is assured.

The review format, in coinciding with the Dark of the Moon series, has been drastically updated in comparison to previous reviews. Please take a moment to review this thread in the Forums. This thread will explain how the new rating system will work. Any feedback on this new system is highly encouraged. 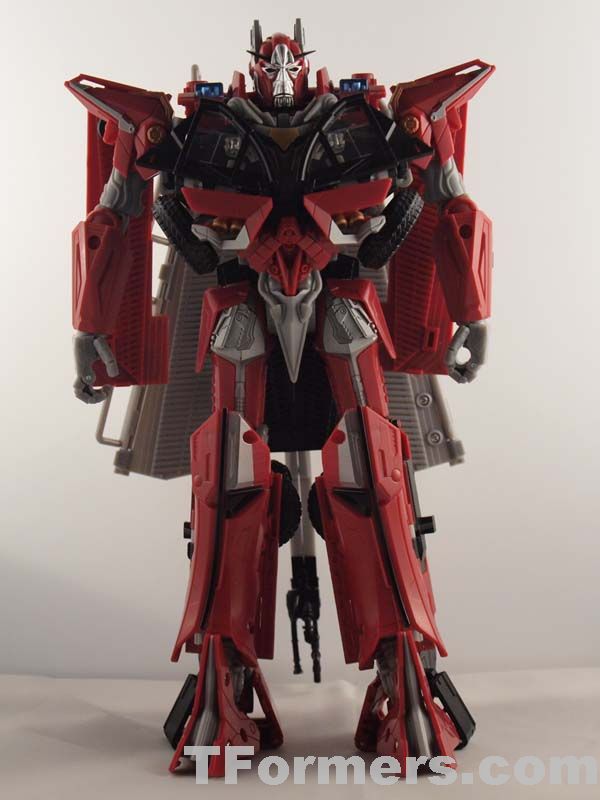 Sentinel Prime sure does look the part of a leader. Primarily red with silver and black accents, he also features a "cape" that consists of this roofline being split. He also has a cape that runs down each shoulder. The head sculpt does a good job of blending the Bayverse look with that of a more traditional Transformer and features orange eyes. Overall, he fits his bio well as being a weathered and respected warrior 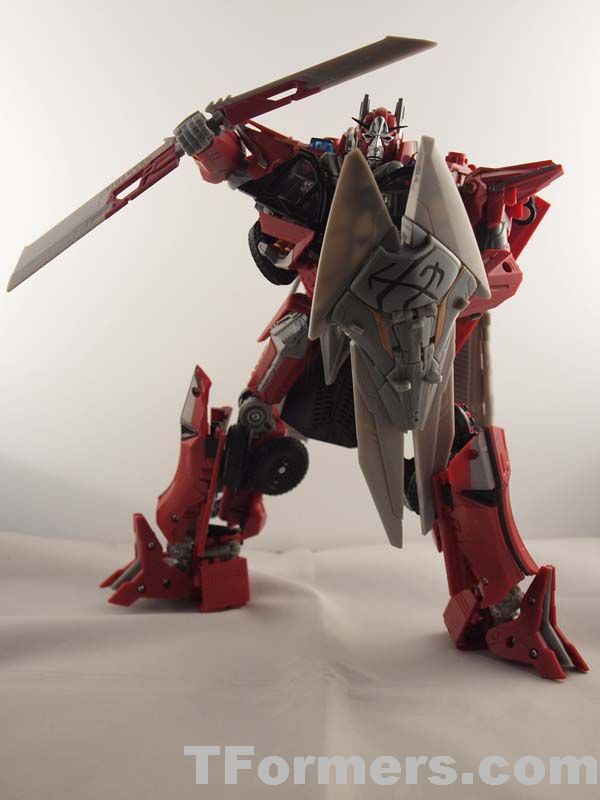 
Articulation is fairly well ranged. However, he is slightly backheavy and doesn't have any rearward haunches to keep him stabilized. It may be tricky to stand him in an active pose.

Sentinel features several gimmicks in keeping with the Leader class line. Pressing a button below his mouth will will open his mouth, cause his eyes to light up and have him utter the phrase "I am Sentinel Prime". In other words, rather generic stuff. There is another button behind his head, but for now it's irrelevent. Sentinel comes packed with 2 accessories. The first is a double bladed staff that can fit in either hand. The second is a shield that can either peg to his left forearm (highly recommended) or grasp to his hand via a fold-out handle. Just know that even with the fist clenched, both the shield and the staff will still be loose, as there is no positive locking system. This makes battle poses awkward.

Some struggles with balance and weapons grasping. With all the tabs this figures uses in it's transformation, I'm surprised 2 more weren't used in the hands to hold the accessories.

Hasbro recently beefed up their instructions by highlighting the transformable steps in red. However, this can make reading them even worse. Sentinel is definitely an advanced skill level, but he can also be frustrating to convert right. This is because a series of small tabs and slots are used to lock the alt mode body panels in place and it takes exact placement to get everything to fit right. Unless you do it on the dot, you'll likely have misaligned panels that won't stay in place.

Synchronizing all those tabs and slots will likely frustrate you the first time around. A few hints about the alignment: (1) The feet align diagonally. Trying to get them to line up straight will not work. (2) Makes sure the knuckles to the fist point inward when wrapping the leg armor around it. If the knuckle line points outward, you won't be able to attach the alt mode side panels right. A lot of fine adjustments will be necessary once you have everything in place.

Hasbro has employed better attachment systems in the past. Too many small tabs lead to ill fit and finish. 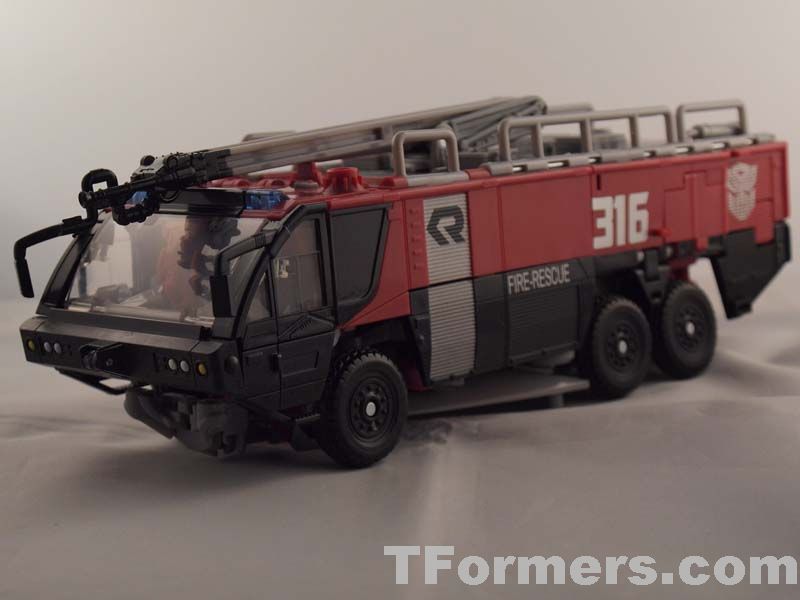 The alt mode is a mostly finely crafted work. The cab is blacked out, while the top half of the body is done in red. The lower half of the body is black. The Rosenbauer logo is embedded on both sides, as is the number 316. An Autobot insignia flanks the rear. Blue light bars adorn the top of the cab. A well executed alt mode... for the most part.

The alt mode is based off the Rosenbauer Panther 6x6 fire truck, sold mostly to airports. Shile most details are faithful, one thing does puzzle me. Why have a clear windshield if you can plainly see the back of the robot's head? This is a case where havign an opaque window would have been a much better idea. As it stands, it is the only glaring complaint with the alt mode. 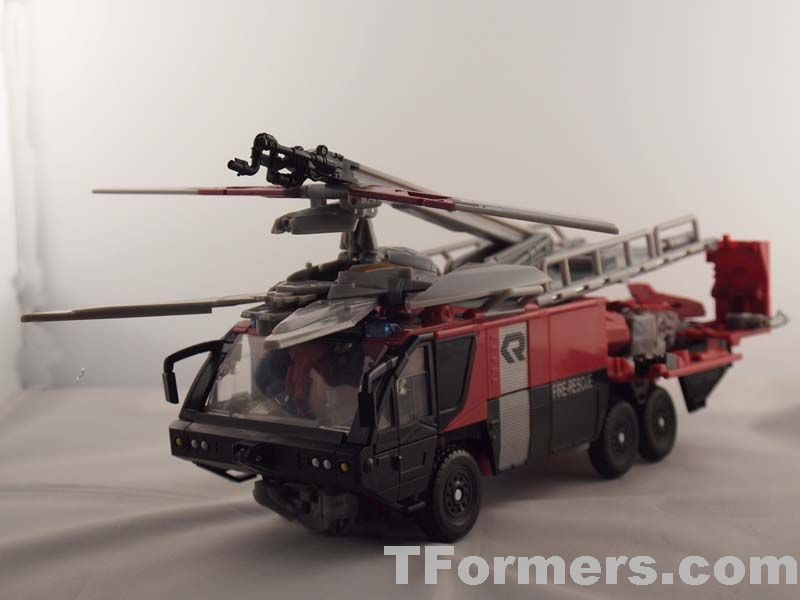 This is a very functional fire truck, even if you can't squirt water from it's hose. The 2 jointed crane is fully rotatable for a variety of different positions. Though it may look like it, the head unit is NOT jointed. It is, however, rubber. Pressing the gray button behind the lightbars will emit a siren, as well as light up the light bars via an orange LED module. Without the shield attached in "storage mode", there is plenty of ground clearance to roll the vehicle about. With the shield on, however, clearance is minimal.

Now for the main gimmick of the line, the MechTech. Attaching the shield to the roofline with the blades creates a rather formidable battering ram that likely could slice up a Con pretty good. If that's not enough, a pair of cannons can flip out from the rear end. Also, when you attach the MechTech shield to the roof, you'll get a "connection" sound byte and the light bars will briefly flash.

For a $45 Leader class figure, there is NO excuse for showing the head ANYWHERE in the alt mode. None. 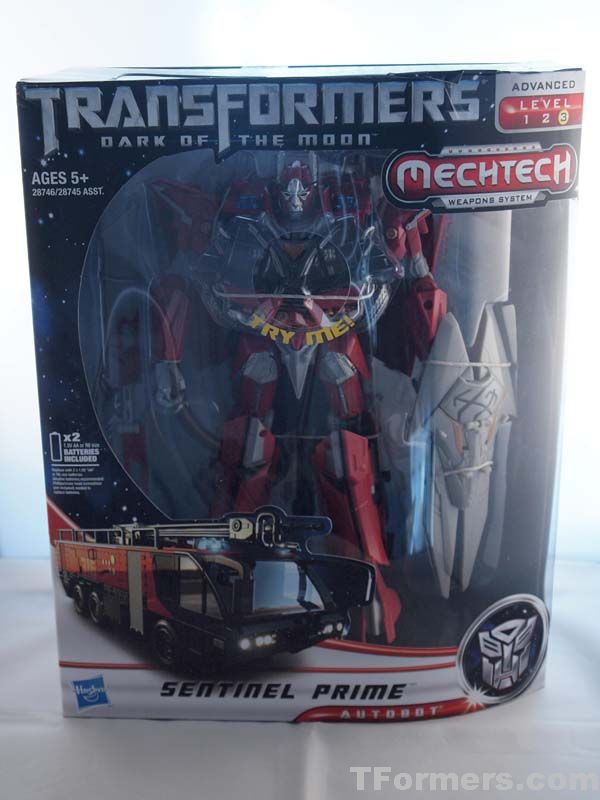 There are definitely durability issues at hand. There is a lot of soft rubber, from the head sculpt to the water nozzle to the mirrors. The extensive use of small tabs is also a concern, especially considering that alignment is an issue. Finally, the shoulder tabs are pretty fragile. I've already had to realign the snap tabs once. It's questionable, especially if he's not handled carefully, how long he will last.

There is certainly a lot of expectation for a $45 figure. For the most part, Sentinel delivers. He has lots of playability and just plain looks good. However, durability and complexity will reserve this figure for those who can treat it gently and care for it.

Definitely not for the kids, unless your kid uses kid gloves.

Sentinel Prime has been a hit list on most people's eyes since his first leaked photos. It's no wonder. He is a great looking figure in both alt and robot modes. However, he is also a very fragile figure and you will have to budget some time to handle him properly. I can't see this figure sitting wheel with many kids and even some adult collectors might let him gather dust. It's a shame, because he has the looks of a hit figure.