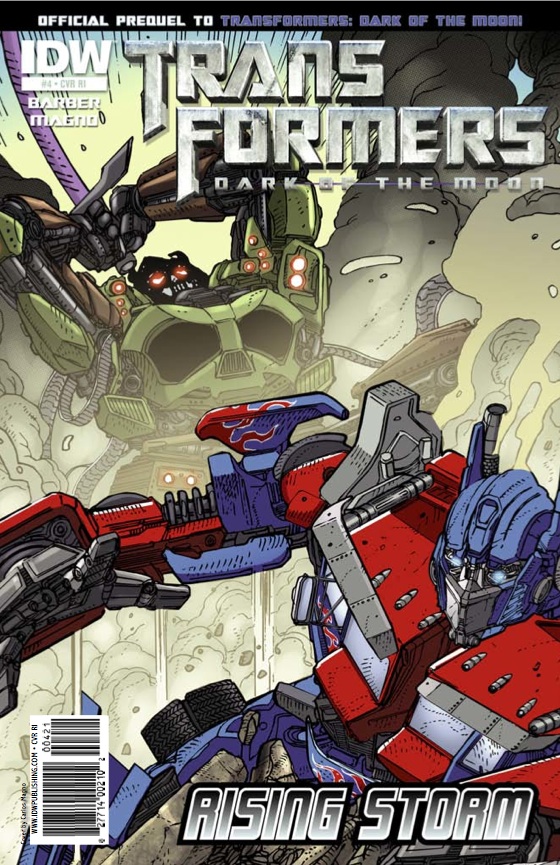 The last installment to this comic series hits in a few hours. The comic shops will open and eager readers will be able to rush the doors and get their ending issue to the Rising Storm that is Transformers 3 Dark of the Moon. A great build to what will soon be on the big screen this summer. And while we end in a place that does not answer all questions it is indeed the purpose of Rising Storm to introduce what will most likely NOT be introduced in the movie. This is a short contained conflict between Bots and Cons to introduce a new threat at a magnitude the movie will explain in full. But for now, it's a nice snack to get us started!

Bumblebee finally putting to rest where Barricade will be from now on.

Optimus Prime and company rain on Starscream's parade in Philadelphia as he tries in vain to make Shockwave care about his plight. As Jolt makes a distress call from Diego Garcia and leaves Prime hanging on the other end, Shockwave finishes his killing spree, frees Fearswoop and jets off to their next target! The cycle sisters continue to battle their foes, as Elita-One runs from Astrotrain and when the time is right she takes advantage of the opportunity to get him off her back. The Autobots realize their foes are trying to flee just as Elita arrives on scene to warn of the trap. Shockwave arrives suddenly and without warning to battle Optimus Prime in the final battle that leaves the Autobots licking their wounds and trying to make sense of what will happen next? They find they've been played and the price of the day is a high one. They have survived the Rising Storm… but that which follows is darkness...

Shockwave's honesty, he's a robot of few expectations and does not mean to beat about the bush.

This is a very strong ending to a comic that could very easily play victim to the constraints outside of it's control. Yet Barber has expertly navigated it well. The threat and calculation of Megatron is played well. He hardly appears in but a few panels throughout the whole comic yet I know he's the guy pulling all the shots and it's Shockwave who's his right hand man executing his will while he's off doing other things for the next battle. I really like this Megatron. All the small groups of characters seem to have a moment, the humans, Starscream, Prime with his warriors and then individually as he battles Shockwave and his personal failures, the cycle sisters, Lennox and Epps… everyone played their part and nothing was wasted. It's a nice intense closing issue to a well executed story, which leaves the bots in an unsettled state. Dialogue great, pacing, the final page just leads straight up to that spot where you are sure the next opening page will be the opening scene of the movie. (Without too much time passage.) But they did accomplish a goal and a revelation to get them from where they stopped at last movie to now the eve of the next.

…Autobots are survivors… AND are great for target practice.

I want more Barber and I want more Magno. If there is anything else to come in the future for this creative team, I want more from these gentlemen who did a great contained story like Rising Storm needed to be. I hope that fans and movie goers alike will pick up these issues of Rising Storm or the trade paperback later this month and have a fun read to prepare them for the movie adventure that will be here in no time at all. And hopefully in the future maybe even the coloring team will continue to have a chance to color more of Magno's work because honestly it's doing everything to make his work outstanding. And I'd like to see more at this level. Especially from him.