Shockwave - Dark of the Moon - Figure

Hasbro has been doing a fairly decent job of bringing back characters from retirement. One such character is Shockwave, the cold methodical Decepticon who hasn't seen any action since Animated. He gets quite the makeover for Dark of the Moon, but not so much that you can't recognize him.

Few have ever seen Shockwave and lived. This is the hand that ensures Decepticon plans remain secret from the Autobots. He eliminates evidence and witnesses with brutal, emotionless efficiency. The only hints he ever leaves of his presence are smoking craters and the collapsed tunnels through which he travels. 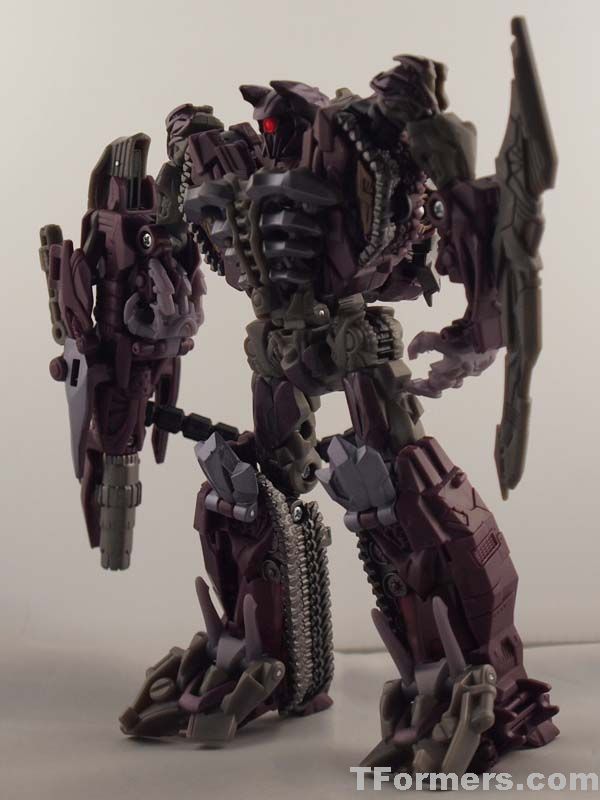 Even if he has adopted a more techno-organic look, you know at first glance this is Shockwave. The mostly purple color scheme is accented with a little gold and plenty of silver. He's also bulked up quite a bit, looking more like a bouncer than a military strategist. The head sculpt is a perfect blend of G1 and Bayverse, complete with red piping for the single optic. It might take some getting used to, but he is one mean looking critter. 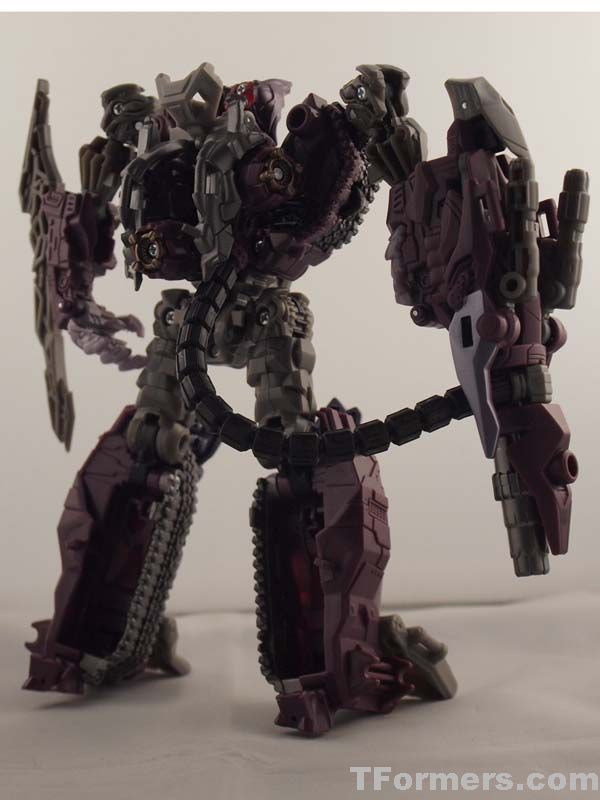 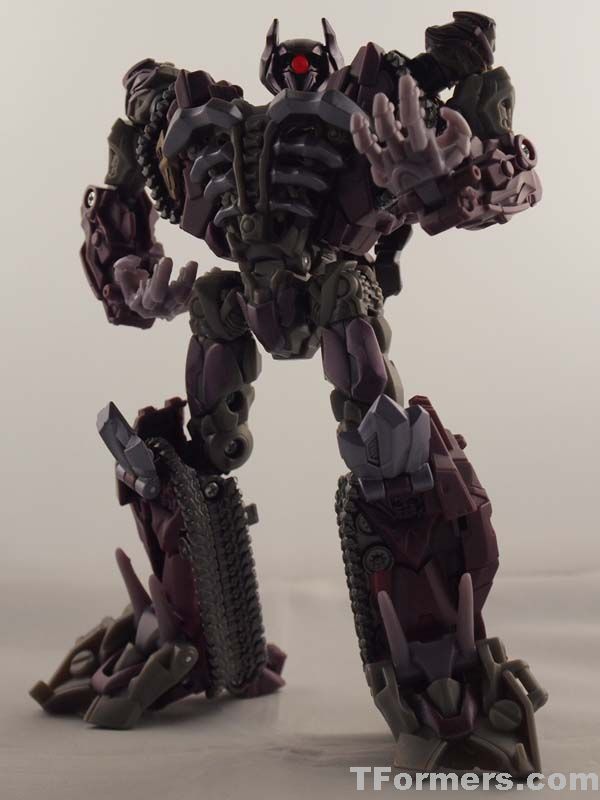 
Range is excellent, especially with the shoudlers and hips. He's also remarkably stable. Only improvement needed is a pivoting waist. The only real complaint is that the energon pipe connected to his cannon limits range of the arm. However, you can disconnect the rubber pipe to gain that range back. 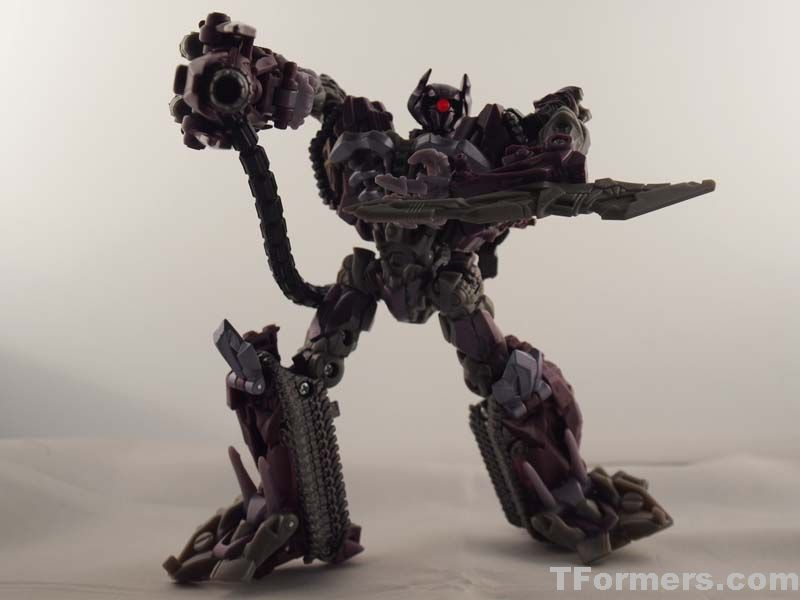 Shockwave just wouldn't be who he is without his massive arm cannon. Thanks to MechTech, it gets an extra boost. Slide the rear tab in place and 2 smaller cannons pop out, giving him even more firepower. As a plus, you can lock the tab in place. It's amazing they didn't think of this sooner. The left arm features a curved blade for close combat. For a wicked bayonet, simply take the blade off the arm and connect to the top of the cannon.

(out of 9pts total) A techno-organic on Shockwave's robot mode that absolutely works.

Transformation is pretty simple to accomplish. The instructions make the arms seem harder to transform than they really are for some reason. Once you've converted him a couple of times, you can easily eliminate 3 steps.

Transformation is also very seamless. Everything has a nice flow to it. You don't even have to disconnect the arm cannon. You will, however, want to remove the energon pipe. The choice is yours on whether to reconnect it once you have him in alt mode.

(out of 6pts total) So easy you might think he was a Deluxe. 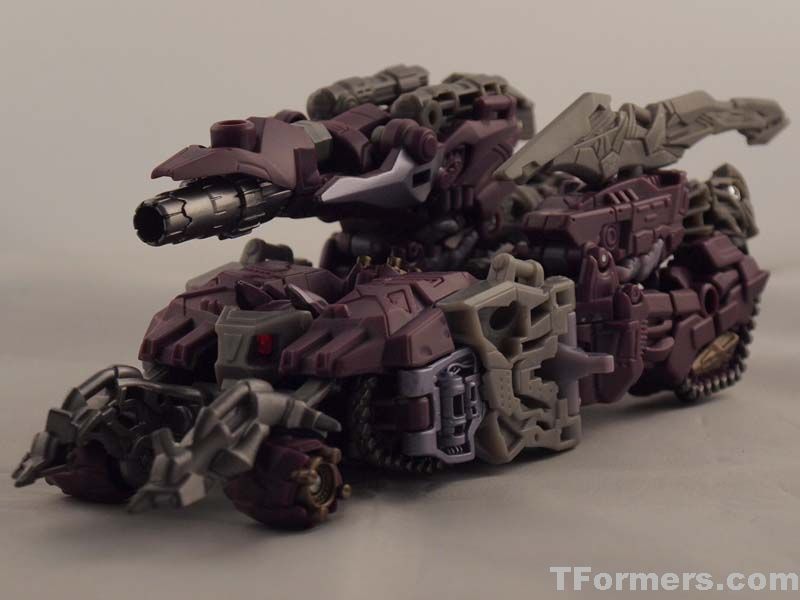 His alt mode is definitely other-worldly. The cannon turned turret is assymetrical to the tank design, residing on the right of the vehicle. The blade sits to the left. The front wheels are barrel type, with more traditional treads on the rear. It may take some getting used to, but overall it is creative. 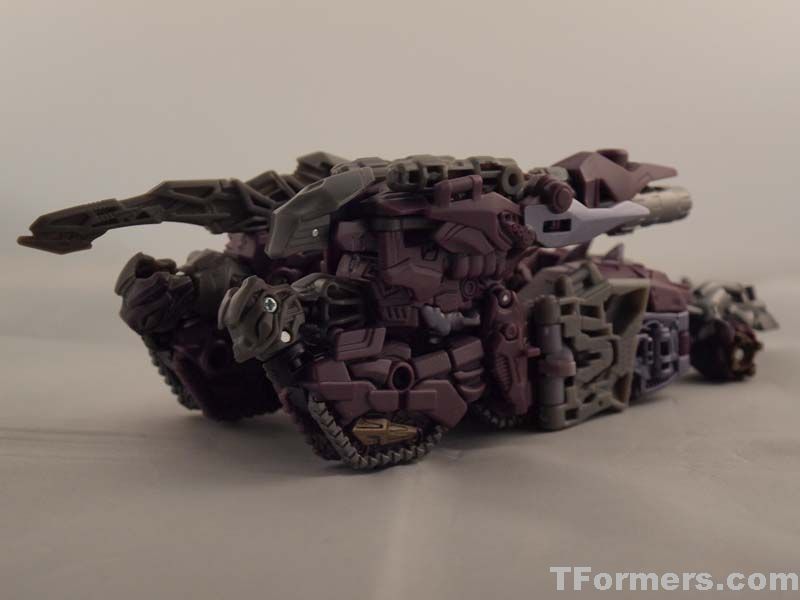 Earthwise, this has no realism at all to it. However, for an alien design is it plausible. All the robot parts are well concealed. Even the head does a good job of keeping inconspicuous even though you can tell where it is. 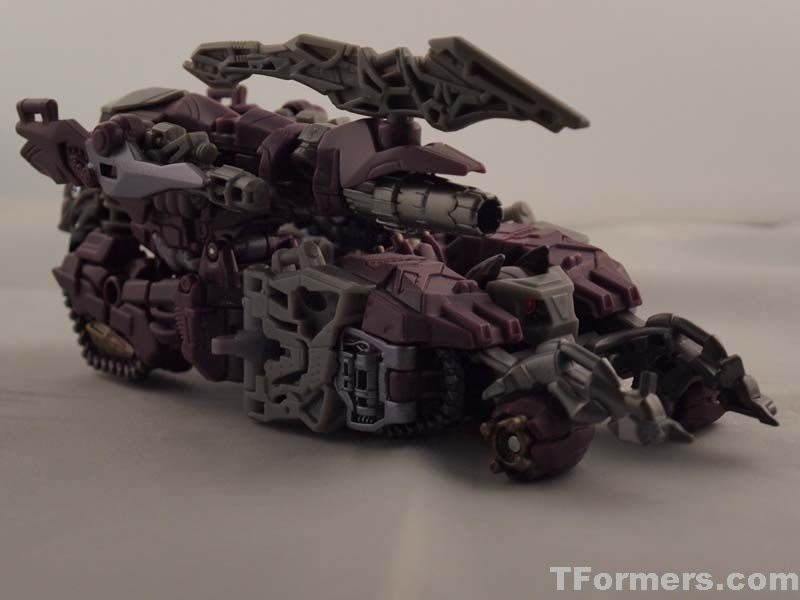 The turret doesn't rotate or tilt, so there's some loss there. There's also no firing projectile. However, the MechTech gimmick works just fine and even helps conceal some of the alt mode's assymetrics.

(out of 9pts total) Loses some of his charm in alt mode... but only some 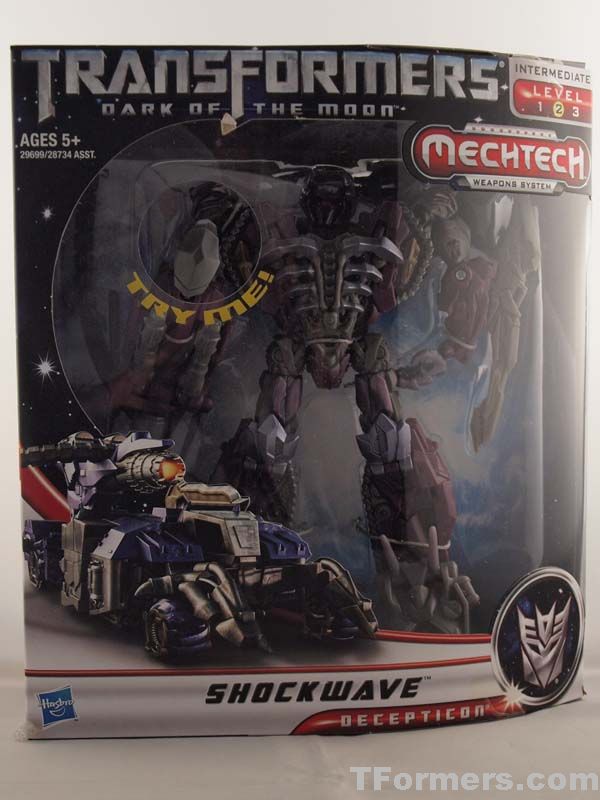 Shockwave is built pretty rock solid. Everything outside of the energon pipe feeding his cannon is hard plastic. The only wear items is the soft rubber pipe and the spring for the MechTech gimmick. However, the pipe isn't much of a loss... even it it's the easiest part to get lost outside of the blade

Whether for a kid or an adult collector, Shockwave has plenty of charm. He's a perfect figure in robot mode, and still retains alot of desirability in alt mode. The kids especially will dig the alien look of the tank. Though a bit small in alt mode, he's still a great buy.

(out of 6pts total) You might lose a part of 2 over time, but it doesn't take away from his overall greatness.

It seems like, according to his bio, that Shockwave's role in the TF universe might change to be a little more low-brow. His Voyager figure doesn't represent that type of downgrade. Most fans might have hoped for something a bit more "earthlike". But if you look back throughout Shockwave's history, he has never assumed an earthen mold. Therefore, this figure suits him well. He's definitely worth a hard look.