If there's one figure that's been done to death as much as Bumblebee, it's Optimus Prime. Hasbro promised a whole new mold for Optimus this time around, and they deliver. By the end of this review, you'll likely know whether this mold is an improvement, or whether the original Voyager mold is still king.

Optimus Prime has defended countless worlds against the threat of the Decepticons, but Earth is the first since Cybertron that he has considered home. He lays his life on the line in the defense of this adopted world. Every action he takes, and every modification he makes to his formidable body, is done to protect Earth. 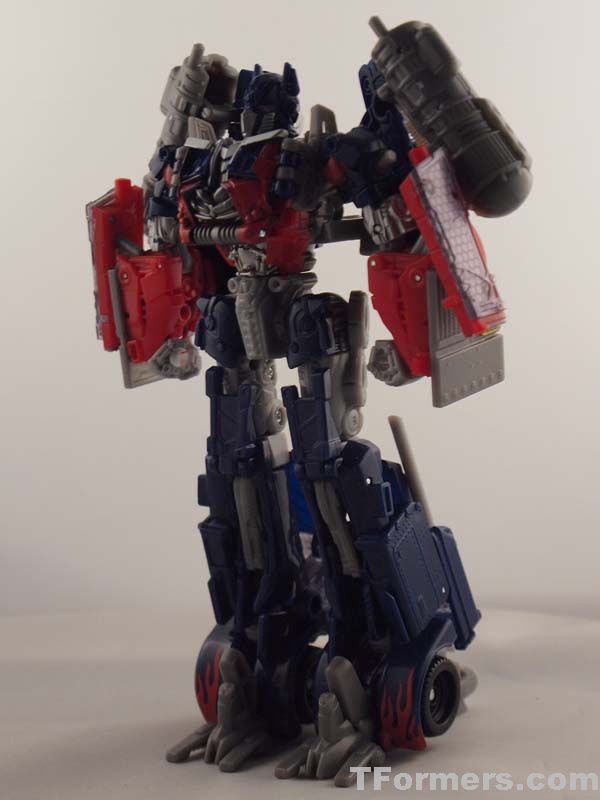 This is definitely an all new mold, sharing no likeness to the previous Voyager mold. It almost has a sort of Robot Replica look to it. However, it's not without it's quirks. For one, the legs are extremely long compared to the torso. This is especially noticeable since the oversized fuel tanks hang off his shoulders. There is also an abundant use of false detaling, including false rear tires molded into the thighs and the false chest. The head sculpt is about the only improvement over the previous version. It uses a light blue piping. 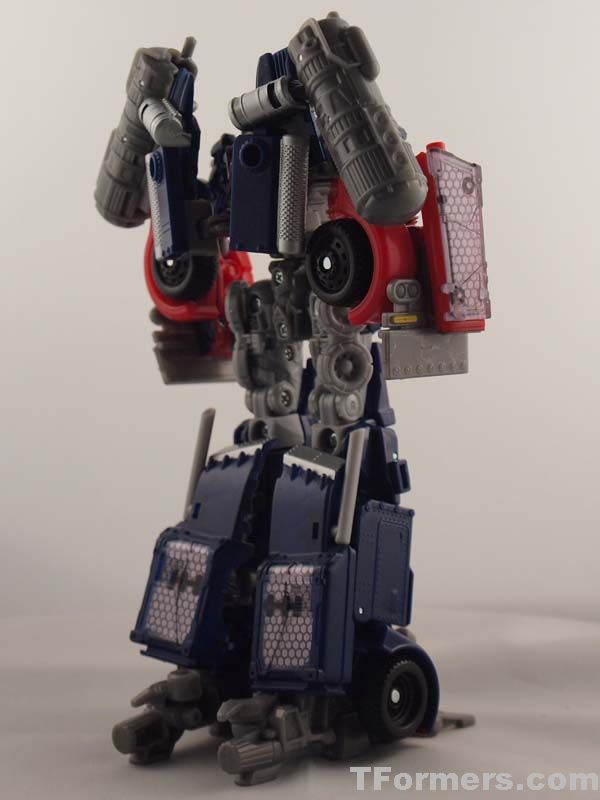 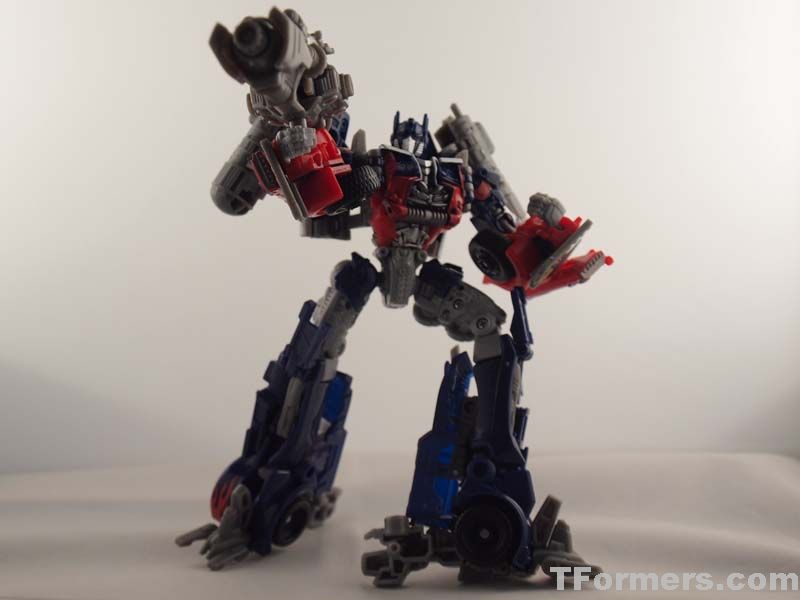 
The knees are never completely straight, although with some filing they could be. Same goes with the feet, which could make a static "at ease" pose a bit tricky.

The main gimmick here is the MechTech ion cannon. Pushing in the rear clip exposes 2 smaller cannons, as well as expands the main barrel. In a long overdue twist, you can lock the spring loaded gimmick in place by twisting the clip to one side.

(out of 9pts total) Misproportioned and too busy looking. A case where older is sometimes better.

The transformation process is certainly clever. The instructions are easy to follow as well. Both of these points make this Prime a bit fun to convert between modes, perhaps his highlight.

Though there are a lot of parts moving about, they all have a fluid action. There's never any real binding. If there is a 'hard part', it's just making sure the shoulders are in the right position to lock the hood in place.

(out of 6pts total)Simple enough to convert, complex enough to not bore you. 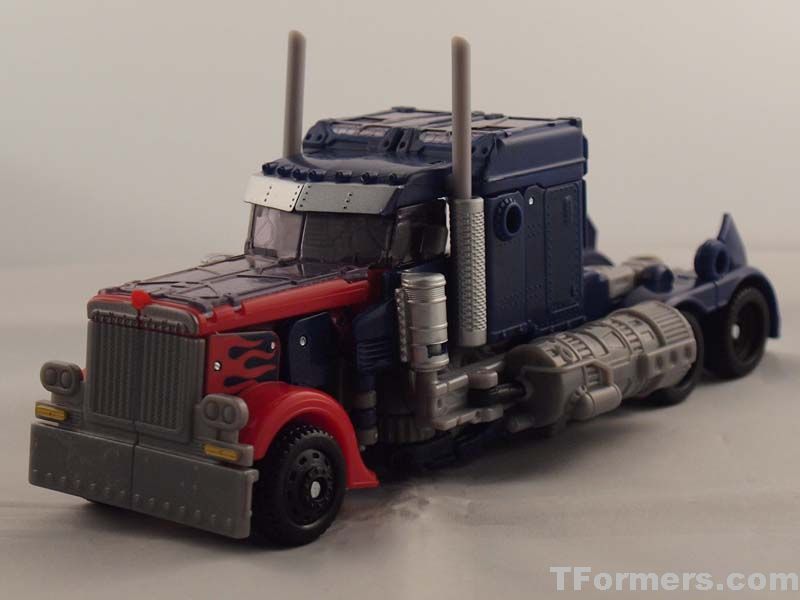 Prime retains the classic Peterbilt 379 chassis that has carried him for 3 movies now. From dead on front, it looks great. However, any other angle shows off unforgiving gaps. The fenders and rear tongue highlight this point all too well. The previous Voyager did a much better job here. 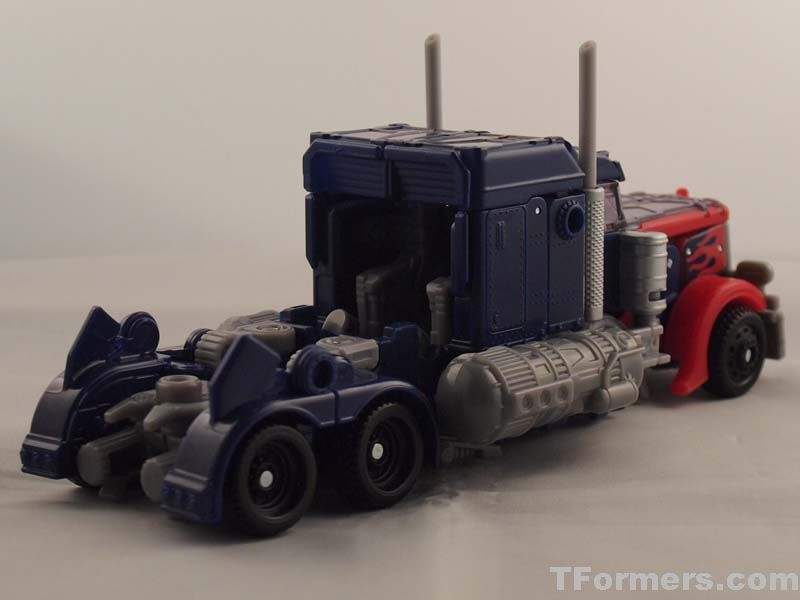 Having all these gaps in the bodywork don't do wonders for realism. Then, for reasons unknown, Hasbro decided to pour salt on the wound. Who ever heard of solar panels on the hood and roof of a semi truck? Maybe I'm wrong about them being solar panels. Maybe they're something else. Like tacky. 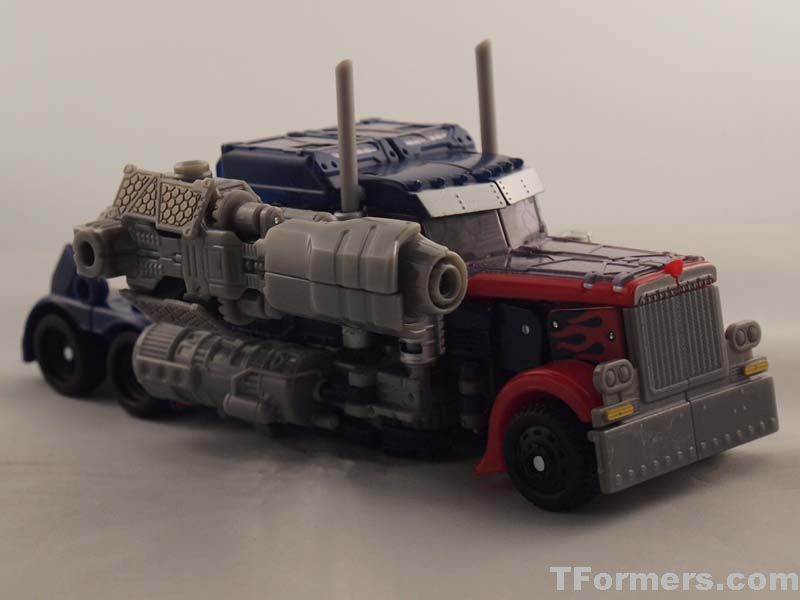 At least you can have some fun with the MechTech blaster. You can either hook it to the side of the cab or on the 5th wheel in back. Just be careful wheeling it about, as ground clearance is ridiculously low.

(out of 9pts total)To try and create a better robot mode, they threw the alt mode in the shredder. 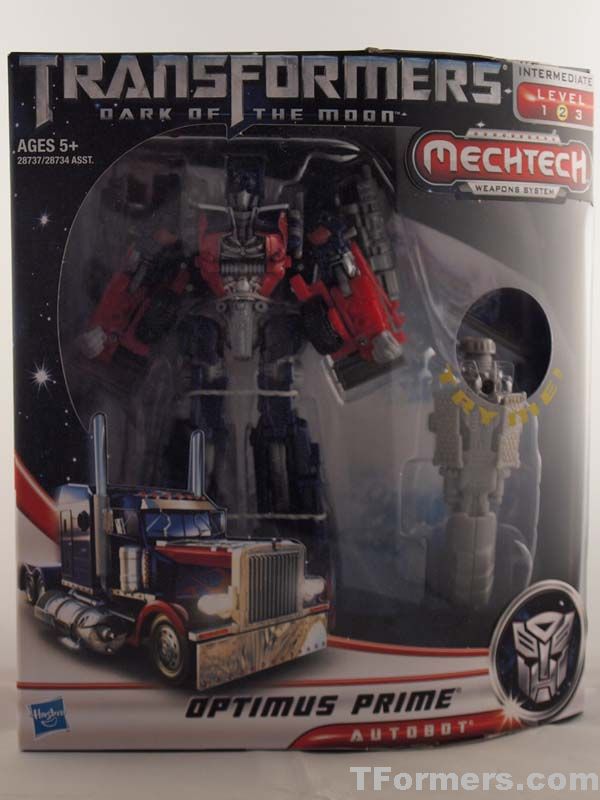 All negative aspects aside, this Prime looks to be pretty durable. All the important hinges and tabs are riveted, so there's little risk of long term looseness. The only concern may be the smokestacks, which are hard plastic and connected separately to the exhaust. I could see them stressing and breaking off with too much abuse.

This totally depends on if you have the Robo-Vision Optimus or not. If you do, stop reading. Embrace him. This Prime is a step or two down. If you don't have the previous Voyager molds, I'd still reconsider. The robot mode has some merits, but the alt mode is just too sloppy looking for my tastes.

(out of 6pts total) May stand the test of time, but he won't win a fight against his former mold.

The common mindset is when you redesign a mold for a new line, you generally find ways to improve upon it to make it more realistic, more appealing, etc. Hasbro has seemed to regress with this mold. In comparison, the Robo-vision version of Prime excels on almost all fronts. However, Prime sells. You're not likely to see this figure be much of a shelfwarmer, even if that's the type of fate it might deserve.