Skyhammer - Dark of the Moon - Figure

In the past 2 movies, there have been off-screen characters that have put the on-screen characters to shame. Perhaps this is because the designers don't feel constrained to make the robot mode look movie accurate. For Dark of the Moon, it looks like we get to put that theory to further test with Skyhammer.

NOTE: The figure in this review is missing a rotor blade. I apologize for the inconvenience. When another becomes available, I will do my best to update the photos with the 100% complete figure.

Back on Cybertron, Skyhammer was a highly decorated Autobot aerial assault commander. He was tasked with personally advising Optimus Prime in countless skirmishes with the Decepticons. Skyhammer is surprisingly nimble given his size and weapon payload. He is an expert with projectile weapons, but also excels in hand-to-hand combat. he carries an energon blade bestowed on him by Optimus Prime as recognition of extraordinary courage and heroism in battle. 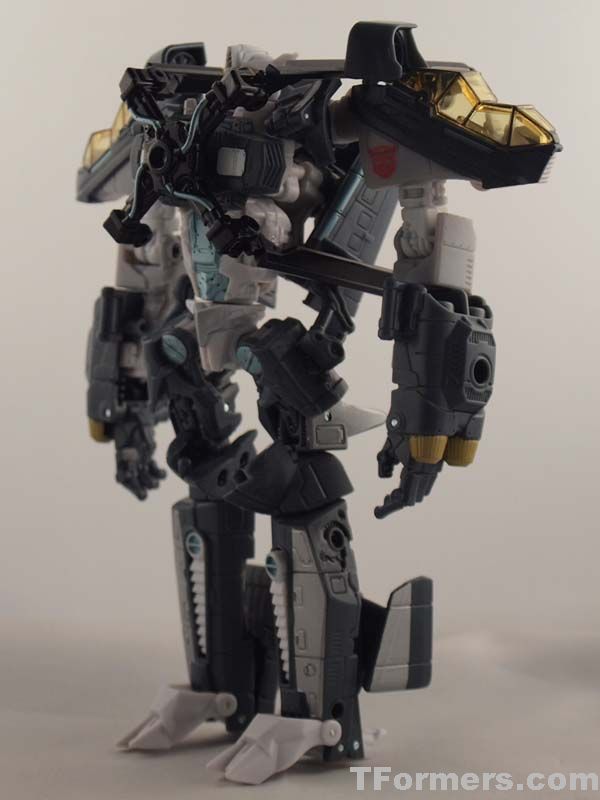 Primarily, Skyhammer is a gunmetal gray. He is also flanked with sky blue, white, gold, light gray and silver apps. The whole package looks stunningly good on him. In an interesting twist, the rotors wrap around his torso to form an ammunition belt of sorts. The rotors clip to slots on his back. The head sculpt is rather nice, with a yellow jeweled visor. Sadly, there is no light piping. 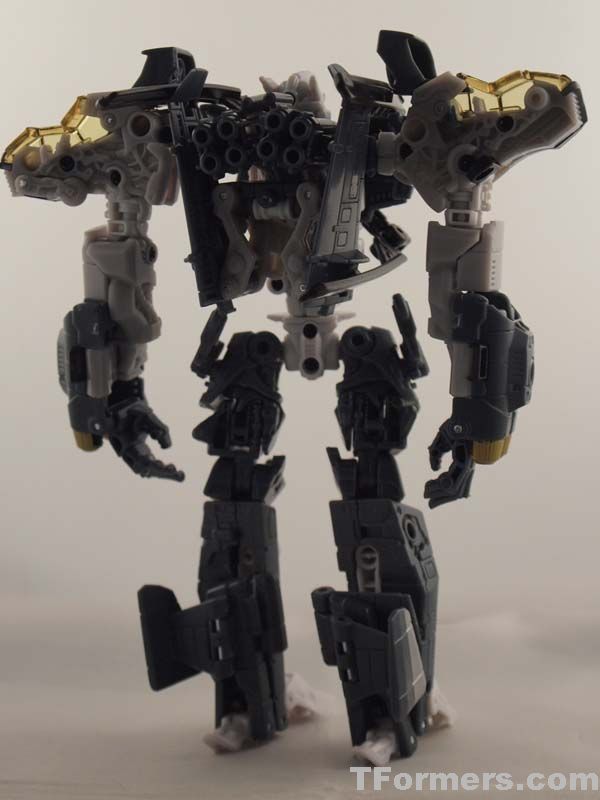 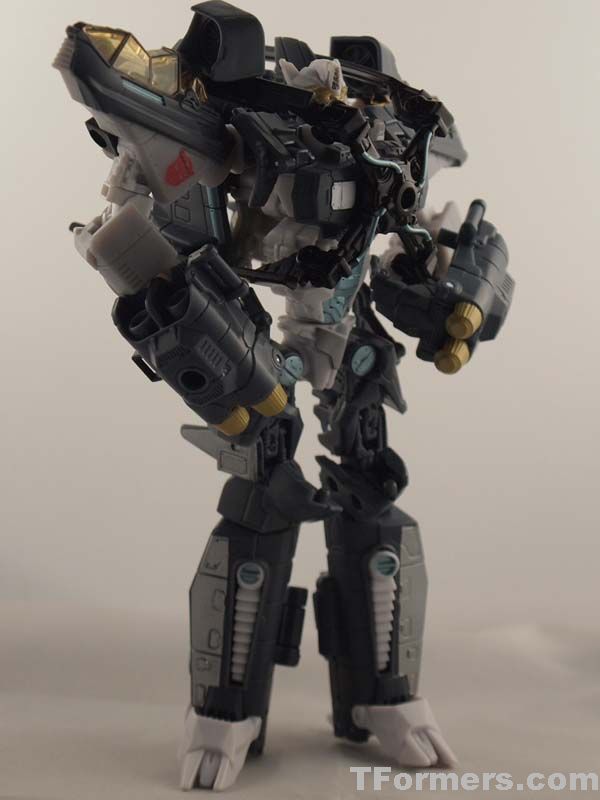 
Articulation is set up extremely well, with great range overall. To get the most range from the feet, make sure to set the haunches behing his feet when bending the feet. I'm not sure if this is just QC, but the joints on this particular figure were extremely sloppy. I'm hoping it's just a fluke with this figure. 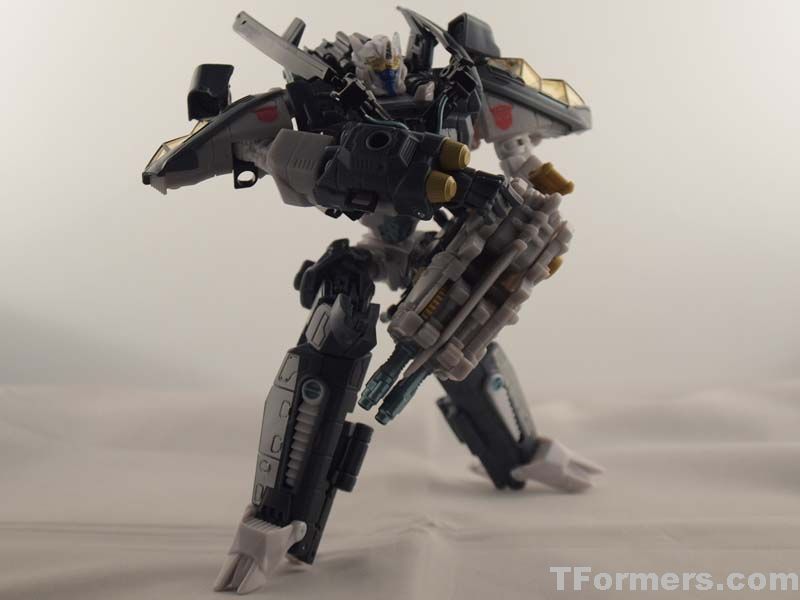 Posing is great, but it's made better with the right weapon. That's where the MechTech weapon comes in. In standard form, it is a double barreled blaster that fits in either hand. You can also peg it to the forearm if you wish. Pushing in the rear clip flips out an energon sword. Once pushed in, you can twist the clip to lock the sword in place. For maximum firepower, you can remove the missile batteries from the wings on his back and peg them to the forearms.

(out of 9pts total) Everything you could want from a Voyager figure.

While having a moderate complexity to him, he's not overly so. The instructions will confuse you in one aspect, though. They show removing the rotor assembly. However, I wouldn't try it. The assembly is riveted in place, so you can only extend it out.

There's no binding or conflicting parts during the transformation. The rotor assembly might get in your way, but that's more a minor annoyance than a major nuisance.

(out of 6pts total)Very smooth going, with minimal hangups. 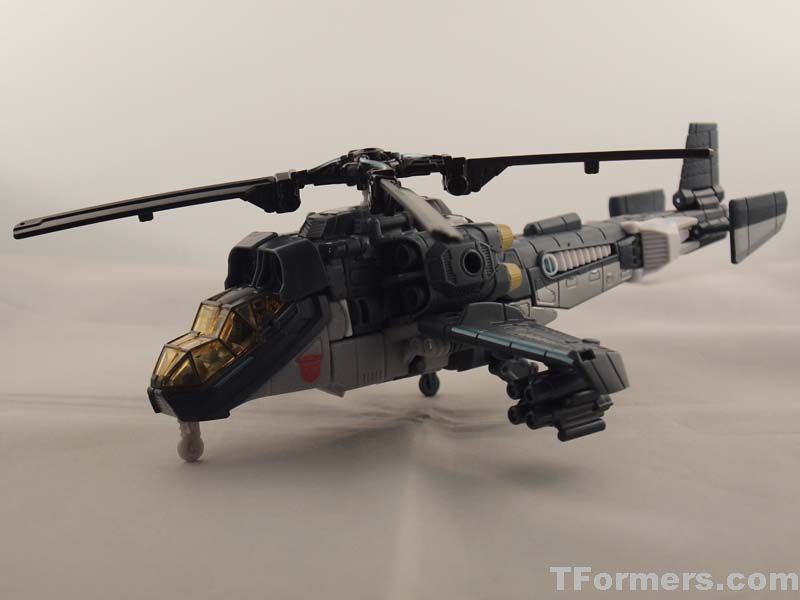 The gunmetal gray paintjob keeps charge in alt mode, with light gray showing on the belly. The cockpit window is translucent yellow, and you can make out 2 pilot chairs within. The rear features a 3pt tail assembly with no stabilizing rotor. It's overall a very attractive package. 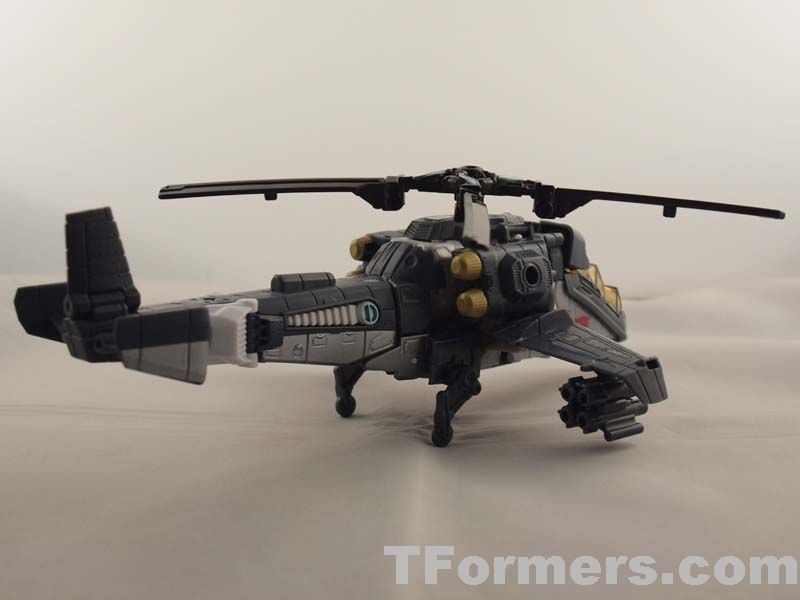 Skyhammer shares a resemblence to the russian Mil Mi-24 Hind assault helicopter. The design is mostly believeable, except for the missing tail rotor. However, it could be assumed this design uses a NoTar design. He comes complete with a retractable 3pt landing system. The front wheel folds neatly into the nose, while the 2 rear wheels fold on the outside. The only complaint would be looking at the rear, where there is a noticeable gap between the wing and the base of the tail. 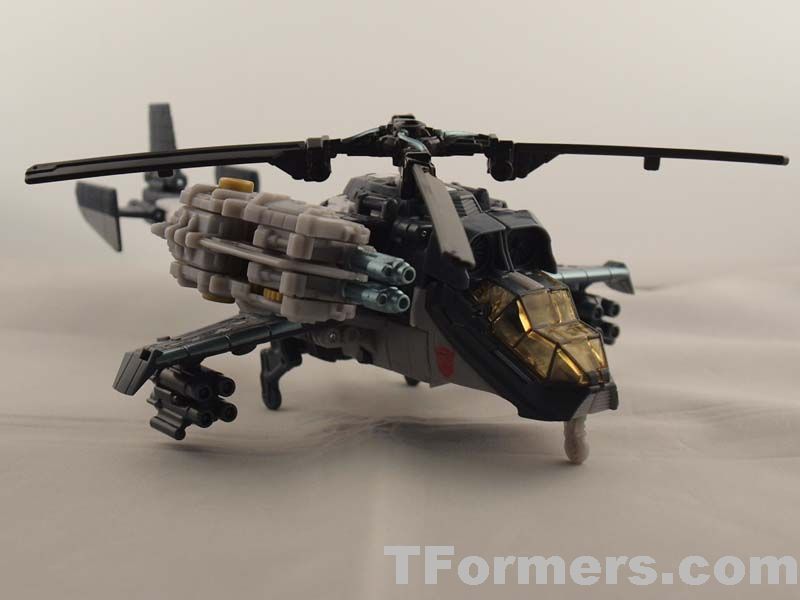 Unlike Voyager class helicopters of late, Skyhammer does not feature a ratchet mechanism for his main rotor. That's not necessarily a bad thing, though. There are a variety of places to mount the MechTech weapon. It can mount to either side intake assemblies, it can mount below the nose or it can mount on one of the wings. In fact, with the removable missile batteries, there are all kinds of configurations you can use.

(out of 9pts total)A mostly believeable design with loads of potential. 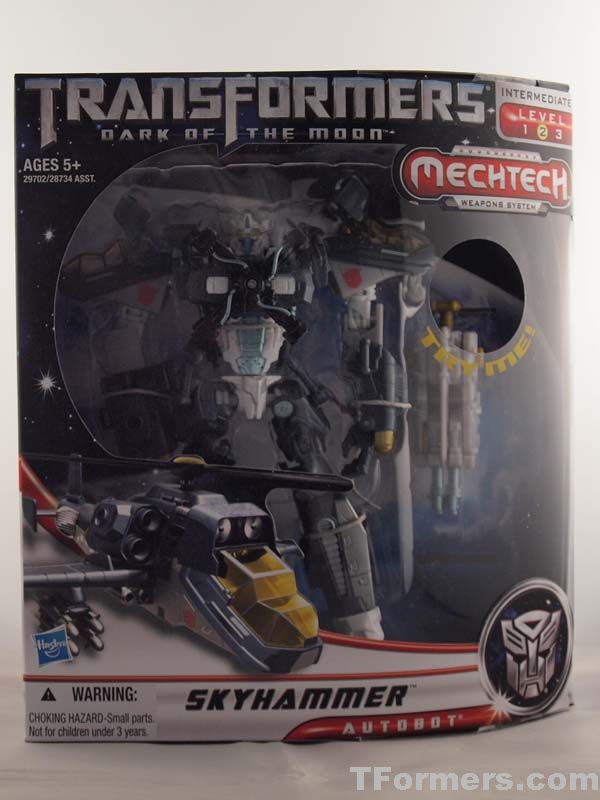 Durability is somewhat questionable. In alt mode, the rotors could become stressed over time and break. If forced (per how the instructions show), the main assembly can break off of it's rivet. Seeing how my sample was quite loose, it stands to reason that the joints (if normally tight out of package) could loosen over time.

The versatility alone makes this figure excel in it's value. The fluid articulation, the various configurations of the weapons and the sleek design will likely keep this figure from being a shelfwarmer. Kids might have a little difficulty switching between modes, but in time it can be figured out pretty easy.

(out of 6pts total) Some parts might not stand the test of time, but overall the value is definitely there.

It would seem that Skyhammer is the surprise contender in the DOTM line. Most people seemed to initially write him off, but after spending some time with this figure, you'd be pretty sorry to pass him up. His excellent looks in both robot and alt modes are enough to please, but it's the versatility of adding additional weapons to him that intrigues me the most. He's definitely a jewel of the line thus far.