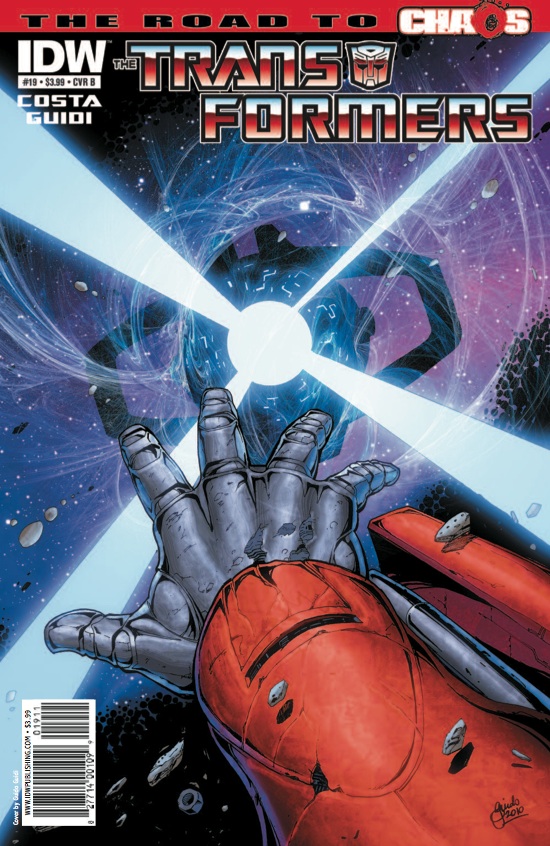 Rodimus goes toward the light!

Ongoing issue 19 is being made available at your local comic shop this Wednesday and it is brought in with a bang not a whimper. We return to the left for dead Hot Rod still clutching the matrix in his hands as the opening page brings us back to the space saga that started in late 2010 for this character! However, Space Opera does not land us in space… yet.

Hot Rod… or Rodimus, crashes onto an unknown planet where other lifeforms have been stranded. Thinking that Rodimus may be something they can use to get off the planet, he is hauled off, unconscious but clearly now alive to a character known as the Admiral. The Admiral then proceeds to try and use the Matrix to power his ship to get off the extremely dangerous conditions they've been living under for some time. He barely pauses in regard for Rodimus's life, which doesn't sit well with our rogue when he awakens in cuffs. He escapes and barrels head first into the foreign planet's indigenous lifeforms jumping him from one frying pan into another. He's saved by a character we haven't seen in comics for a long time, who is clearly not completely functioning on all thrusters. Between the two autobots they come up with a shaky plan to nab the Admiral's ship and get off the planet before anything else goes wrong. Launching this adventure back into the space saga it promised as they head right back to familiar territory.

Costa (Transformers Ongoing, Ironhide, GI Joe Cobra Ongoing) again is building a nice storyline with this issue. Certainly this is not Megatron and Optimus Prime going toe to toe… but I really liked how this comic played out. How Roddy survives makes sense, as dramatic as it was to see him go in issue 13, having him brought back in 19 completely worked for me. The creatures that find him are comical and fun, they set up just the right amount of information to make you wonder about who the "Jangle man" is without giving it all away on the third page. And by the end it completely fits and gives us consequences for our "other" autobot. The characters all seem to be in step with who they are. The pacing feels consistent, the mood is set well. Everything made sense and fit the conditions of what has come before. Rodimus is pulling off his regular wing and a prayer plans… it's just a lot of fun and the familiar love I have for Transformers comics was a warm and welcome return for me.

On art duty for the Ongoing arc this issue is Guido Guidi (International Incident, All Hail Megatron) and Joana LaFuente (Ironhide, Infestation). It's great to see Guido back on art duties colored by Joana. I'm really digging the coloring on Guidos designs. There is a added dimension here that I felt Ongoing 9 through 12 was lacking and I'm feeling the love for Guido once again. Joana's palette seems a bit reigned in this go round. It's not the Kaleidoscope of color we normally see from her. This isn't to say that it's not great coloring, just not as colorful as her recent and previous work. It's still amazingly well lit and shaded. It just feels less flavorful.

It's a previous proven plot point that most monsters start life in caves not ships.

This story isn't too complicated yet has a few nice reveals in it to bring us back full circle. Well on it's way to Chaos, I expect this Space Opera which sets the destination to the stars up perfectly will continue to hit a nice stride and envelop everything we need to put us on the path where Chaos kicks off in July. It's both exciting and about time! This issue is that cozy blanket I've been wanting to cuddle under… familiar, comfortable, and in my favorite chair, right where I want to sit to read my favorite Transformers comics. Thoroughly enjoyable this issue.