Megatron - Dark of the Moon - Figure

Let's face it. Megatron thus far has gotten a pretty bad rap when it comes to movie appearances in the Bayverse. While his alt mode in the first movie had some likability to it, the ROTF design was pretty much panned. Megatron therefore gets yet another redesign for Dark of the Moon.

Megatron has lost battles, but he has never been truly defeated. Even after his near total destruction by the Allspark, he returned. This latest loss is nothing to him. He has plans thousands of years in the making that are finally coming to fruition. This time, nothing will stop him from annihilating the Autobots completely. 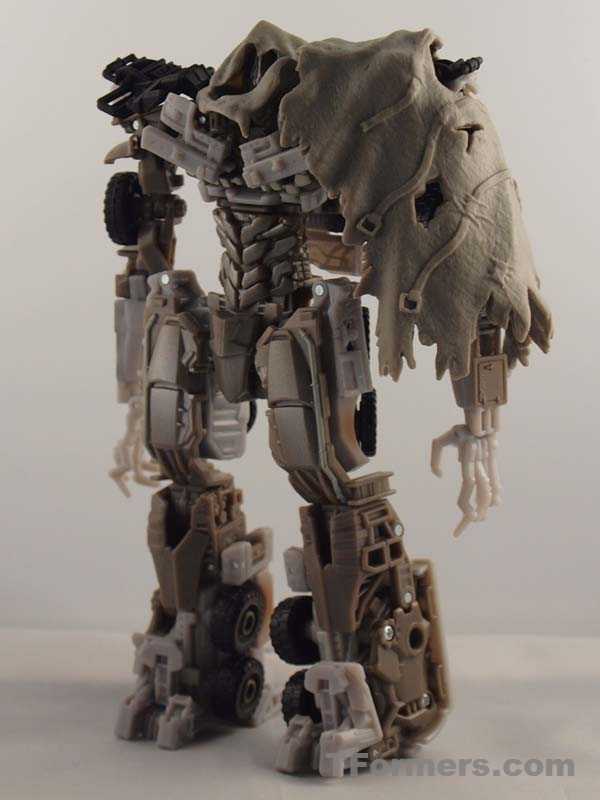 At first glance, he has a sort of Dr Doom look to him with the hood and cape treatment. Kind of airs of that 'mysterious' motif. The hood and cape are both soft rubber, and the hood can be worn without the cape if you so desire. Also, both 'clothing' items can be unhooked. 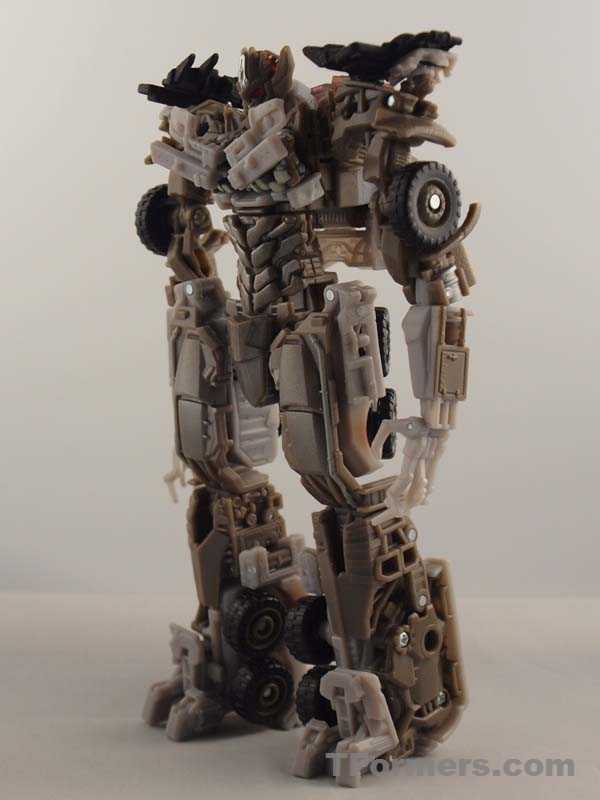 Doing so doesn't take away from the overall blandness. The khaki and PVC gray colors make him look to monochromatic. Only the black shoulder plates and wheels break things up. To show that Megatron still gets no love, he gets a pygmy sized head to boot. Which is probably a good thing for him, since he's still showing damage to his right optic. Perhaps that's why he wore the hood in the first place. It's a bummer he looks so bland, because he otherwise makes for the best Bayverse Megs yet. 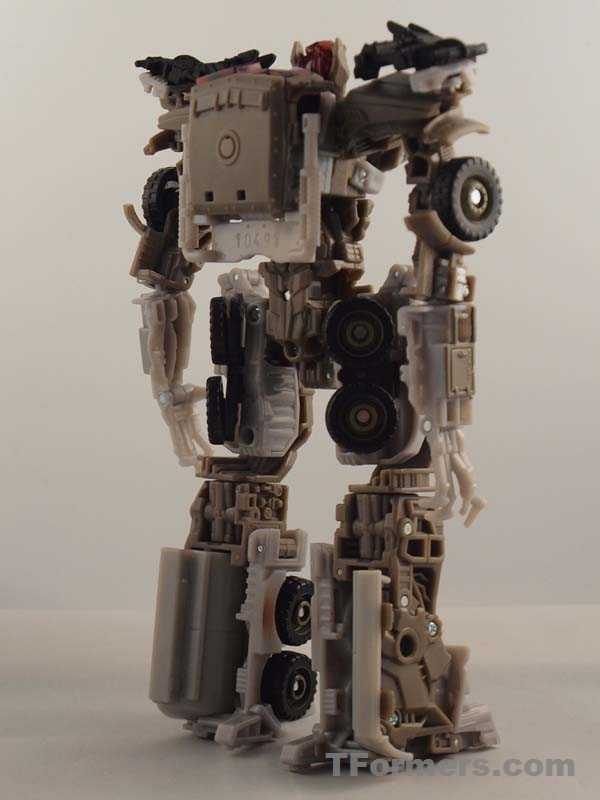 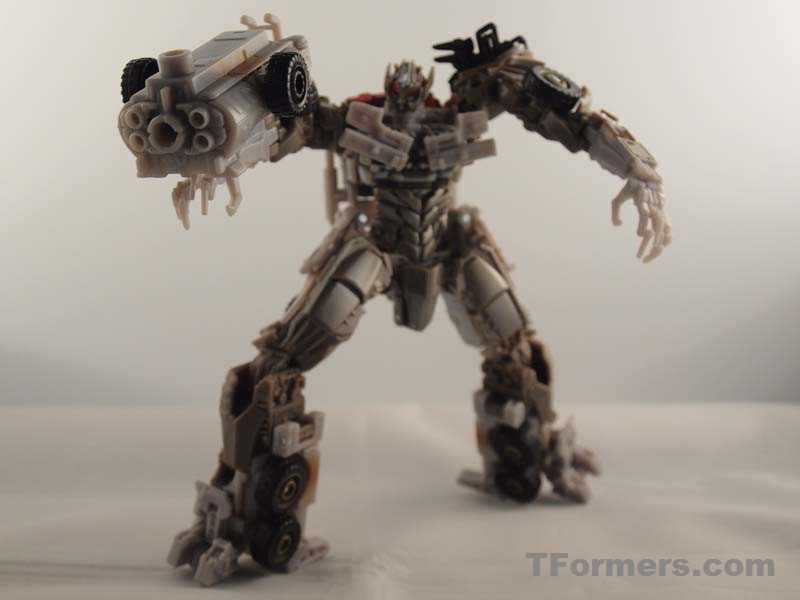 
Joints are set up rather well. While it's odd that his rib cage pivots how it does, that's due more to the transformation process than accurate anatomy.

Besides the hood and cape, Megatron packs a mean punch with his arm cannon. The MechTech weapon can peg to either arm, even if purists demand it only stay to the right. Pushing on the ladder will extend the barrel out. Unlike the previous 2 Voyagers reviewed, the MechTech gimmick does NOT lock in place here. That's rather unfortunate.

The transformation process has a perfect blend of ease and complexity. Nothing about it will leave you scratching your head, but at the same time you'll find yourself converting modes again and again. It's refreshing to see that Tf figures, at least on some aspects, have seem to find a perfect balance with Voyager modes.

Hand in hand with the balance of complexity and ease, the fluidness of the transformation is also top notch. Nothing really gets in your way when you don't want it to, and everything fits into place without much fuss.

With transformations like this, who needs a Leader class? 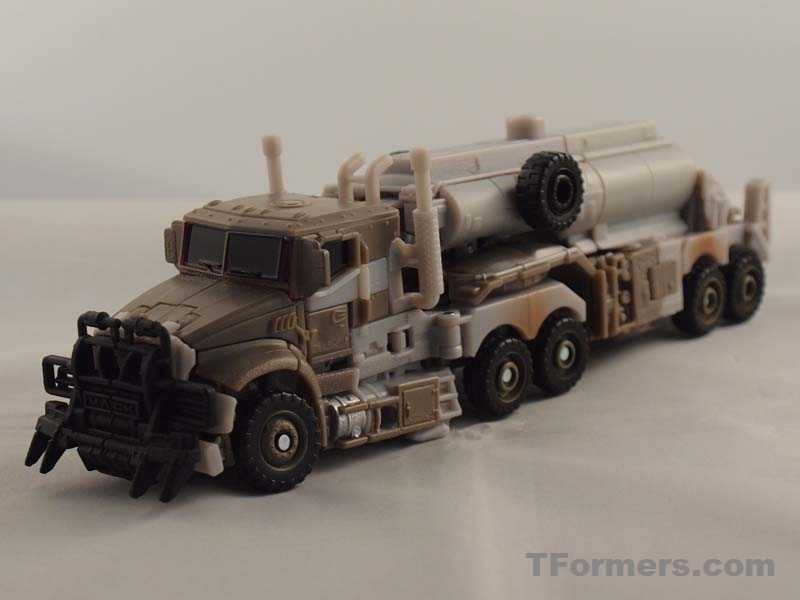 Though the coloration doesn't liven up any in alt mode, it is more fitting of a military type tanker transport. There are even section of the PVC area on the tanks and fenders where you can see sunburn. The windows are a translucent blood red. The black hard rubber brush bar is also a nice touch. Chrome applications would have went a long way here. 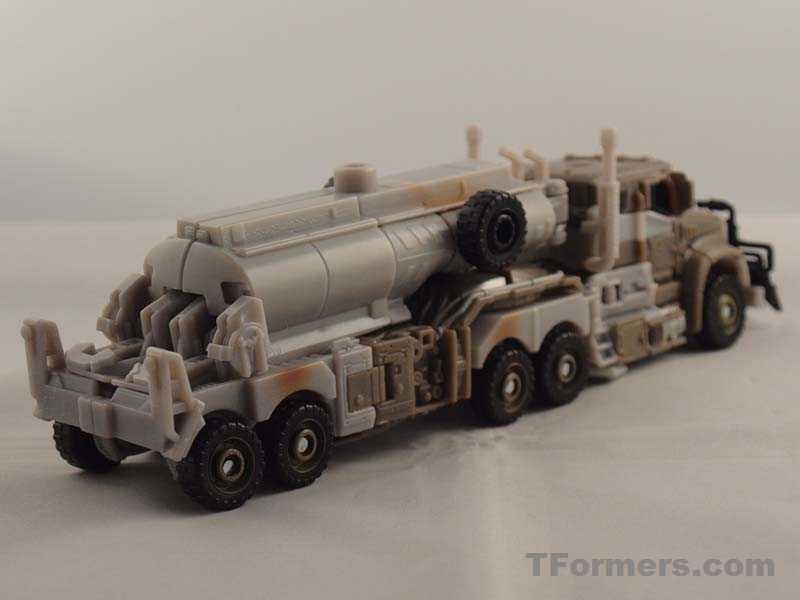 The alt mode is based off the Mack Granite tractor cab with a tanker trailer. The eagle eye can spot loads of detail in the molded plastics, including storage boxes, the tanker trailer controls and even the illusion that the trailer can separate (it can't). Unlike Optimus Prime, Hasbro went to great lengths to cover up any gaps. Their work paid off, which might frustrate one further about Optimus. 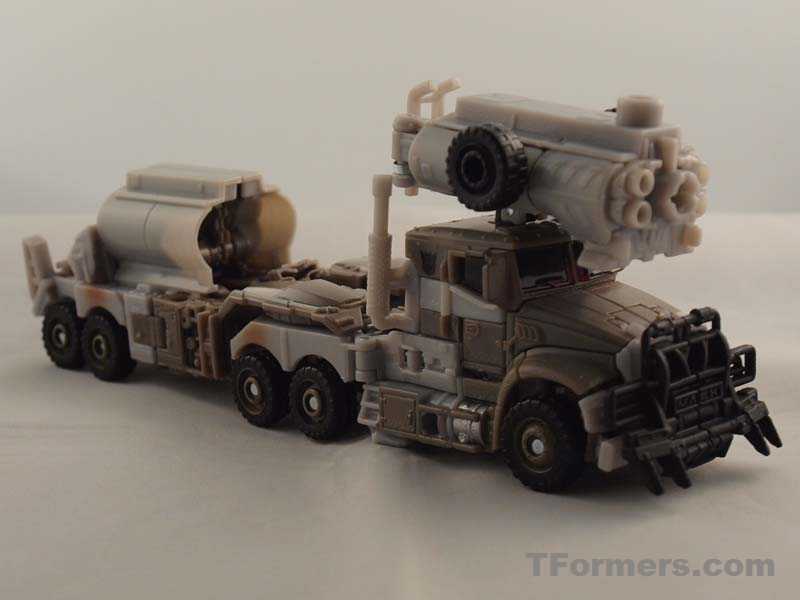 Although there's no place for the hood, you can attach the cape to the back of the tanker to partially conceal your cargo. The front half of the tanker is actually the MechTech weapon. This can be detached and pegged to the roof of the cab. However, there is also a peg on the weapon, suggesting you can mount other MechTech weapons on it and retain the clean look of the tractor/trailer.

Again, flat coloring is the only bad spot here. 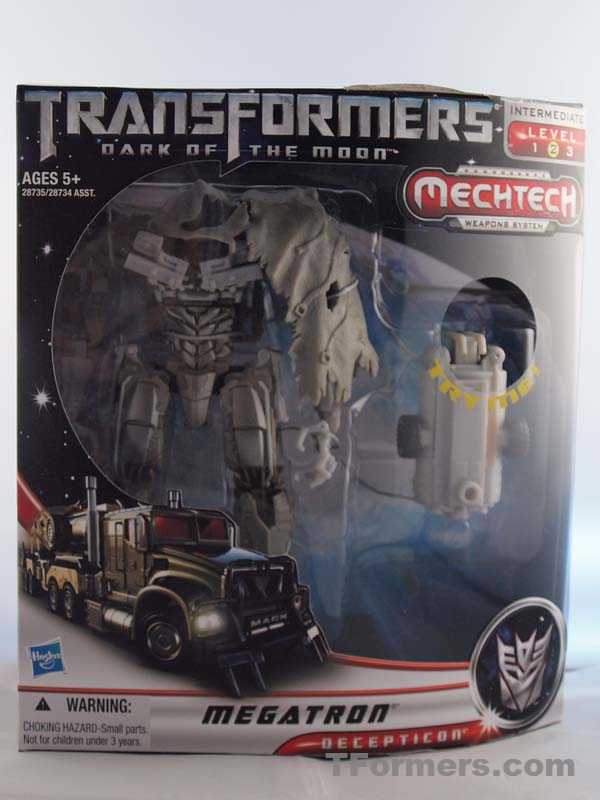 The only real durability issues would be with the rubber appliques, such as the brush bar and the hood/cape combo. Besides that, there's really nothing that can easily pop off Megs other than the head. Which is a good thing, because I can completely see him being redone as a Scourge.

He's a blast just for the transformation alone. He has possibilities in the MechTech department and, besides the lack of color, he looks pretty darn sweet. An easy justification for paying $20.

Should hold up well over the years, both in durability and fun factor.

It can be easily said that this is the best Bayverse Megatron out there bar none. The alt mode is exceptionally well done and the robot mode, for the most part, gives Megs the respect he's longed to have. However, it's sad that they say to not apply much paint to this mold. Some chrome in the right places would do absolute wonders for how he looks. Other detail touches would make this a masterpiece. I suppose that's where the customizers come in.