For every new movie that comes out, it seems Hasbro is challenged with finding a new perk for carry-over characters. Rather than add new gimmicks to existing molds, Hasbro seems to be creating all new molds for established characters. Thus far, it's had a bittersweet effect. Ironhide is the latest to get an updated mold.

Ironhide saved the best of the Mechtech weapons for himself. He spent weeks tuning and tweaking the weapon he'd built, turning into a compact and devastating armament. Now, with his work finally done, he just needs a Decepticon target to test it out on. 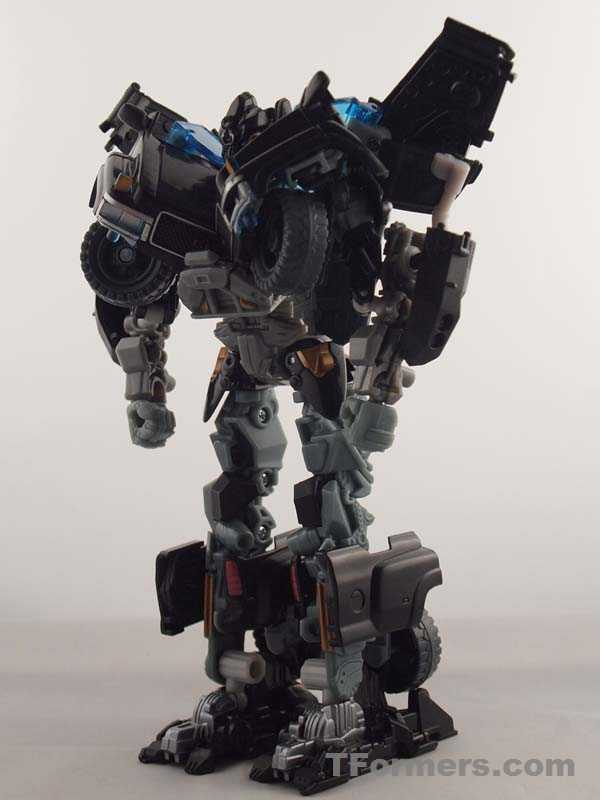 This rendition of Ironhide is certainly more color intensive than past efforts. The legs are now a mixture of light blue, black, red and gold. The abdoment is light blue, with the chest being black. The arms are PVC gray with light blue fists. The head sculpt keeps it's charm from past figures, complete with blue piping. The main complaint here are the arms. They are rather small and hinged in the strangest spots. They just look out of place no matter how you position them. 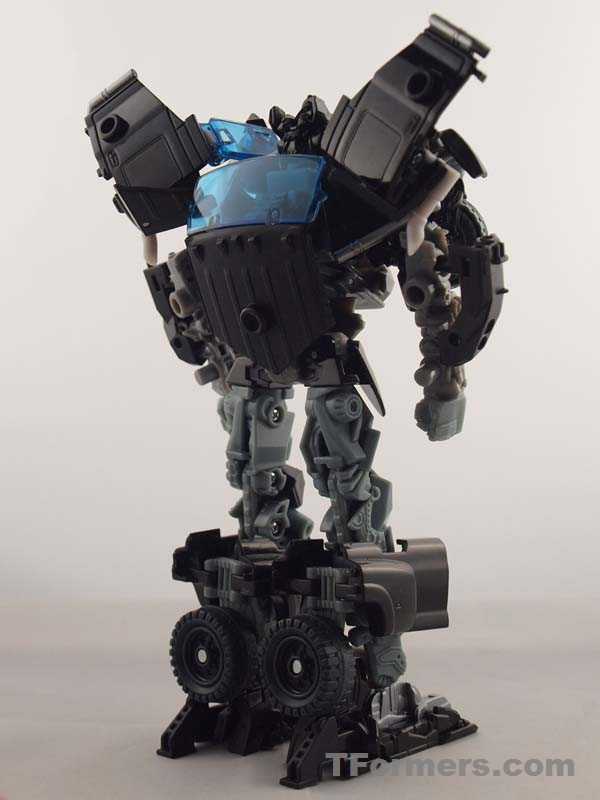 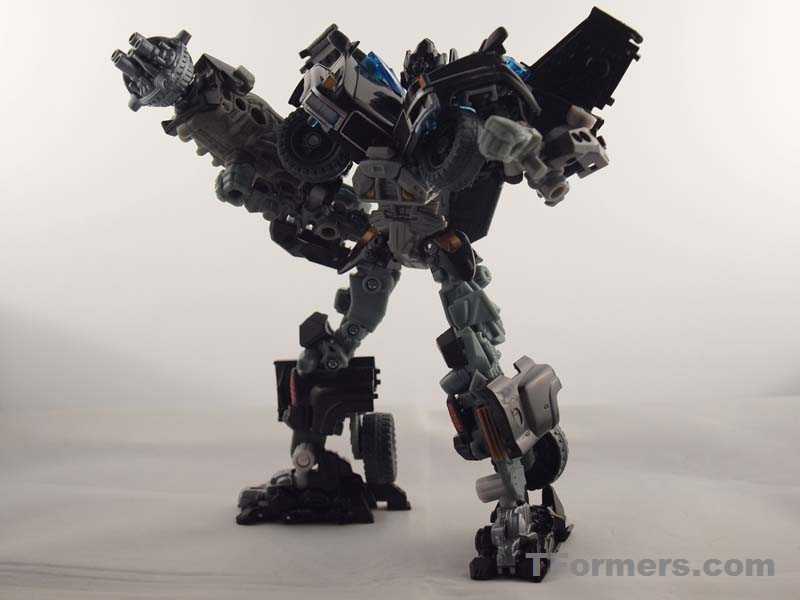 Score:The hips are restricted in bend due to the hip armor striking the waistplate. The absurd arms are also very limited in their posing ability.

The main gimmick here is his "booster", which is a rather other-worldly looking gatling gun. Pushing in the rear clip give you spinning action on the barrels. Not the most exciting MechTech weapon out there.

If the arms don't kill it, the goofy weapon sure does. too bad, because he otherwise looks to be the best of the Ironhides thus far.

While they have taken the complexity of the transformation down a notch, those goofy arms will still throw you with the multiple twists they take to get into place right. The legs, on the other hand, transform rather smoothly.

Even with all the front end parts swaying about, nothing really gets in your way much. Besides the arms, the whole process is pretty fluid.

Easier than before, but you might struggle with the arm placement the first time or two. 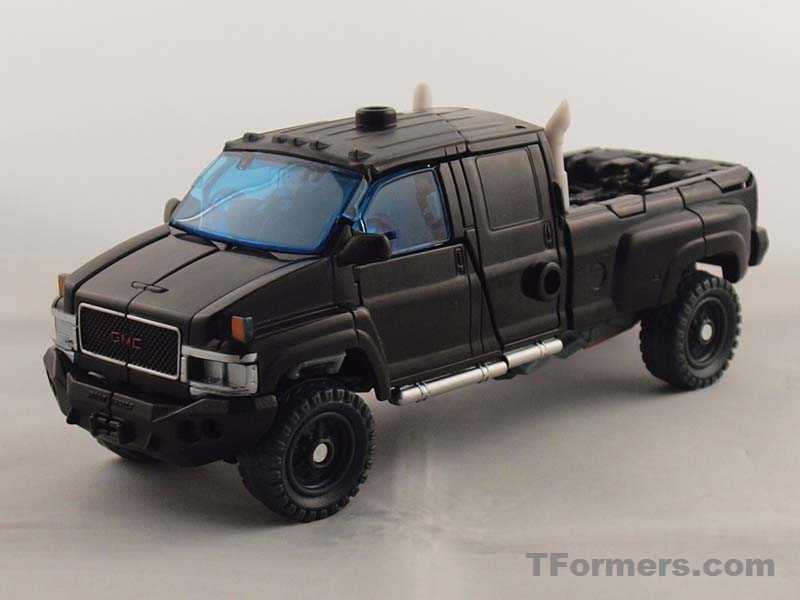 Ironhide retains his GMC Topkick alt mode, even though GMC no longer sells that particular model. The all black paint job remains as well. Details remain the same, albeit for the 3 pegs where the MechTech weapon lock into place. The only "sore thumb" is the exhaust tips, where are unpainted PVC. 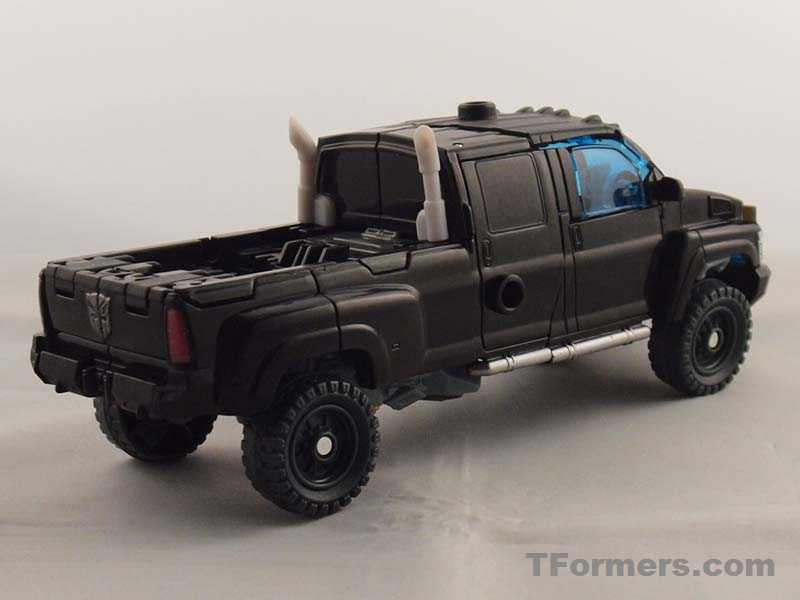 Due to the new transformation process, Hasbro ditched the hard tonneau cover for the bed. Big mistake, as there are plenty of gaps and rough edges to mar what used to be an attractive bed. I suppose there is a make up in that the big external gas tanks are no longer present. 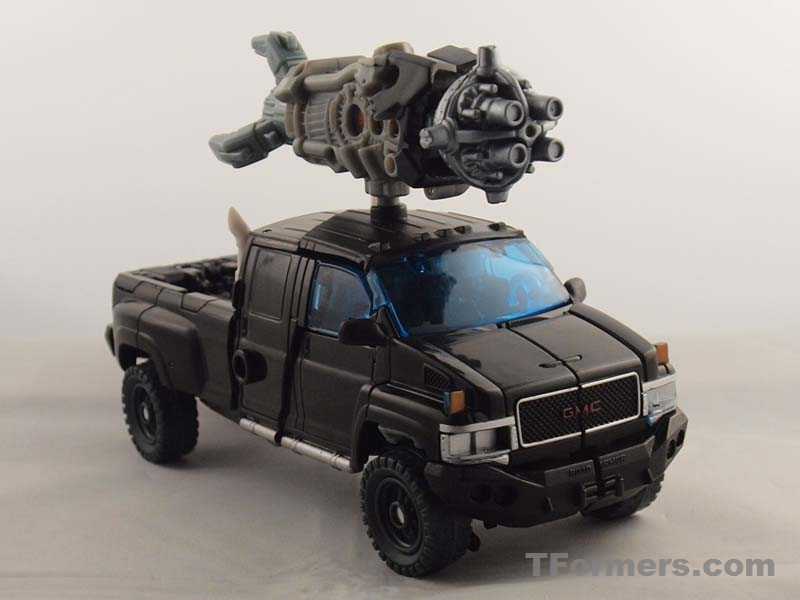 Besides being easily rolled about, you cam mount his MechTech weapon to either his roof or either rear door. It doesn't matter where it mounts, though, as it looks goofy in any position. At least you can load him up with up to 2 other MechTech weapons so he doesn't look TOO silly.

Downsized, but manages to keep most of it's charm. 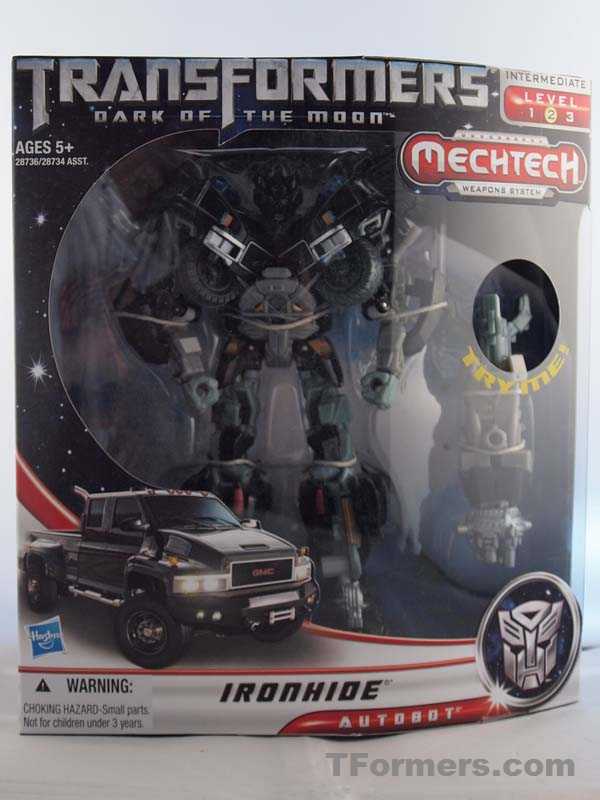 Ironhide seems rather durable. As with the previous mold, the main concern is with the chest/front clip assembly. Since the 2 halves of the grille are now tied together with a bar, it presents a slightly higher chance of breakage. This could hold true for someone thinking it transforms the old way and forces it.

While the old figure had it's drawbacks, I find myself preferring it to this new mold. The robot mode, while maybe not as bright, was definitely more in proportion and had better articulation. For those that have their old ROTF or 2007 figures, I can't see getting this one.

Stick with the old, though the new will likely hold up as well.

Upon doing some archiving, I have found what most already knew or suspected. The Voyager molds have indeed downsized. Ironhide loses 1/4" of his height in robot mode and 3/8" of his length in alt mode. However, I can't see those miniscule dimension changes making it necessary to compromise the robot mode so much. The arms just do not work here. With a Leader class Ironhide on the horizon and the previous Voyager mold looking superior in comparison to this mold, I'd say save your money. However, he does have his charm in alt mode and outside of the arms he's actually not half bad looking. Therefore, use discretion.