Topspin - Dark of the Moon - Figure

When people think Wreckers, they think of down and dirty bots like Roadbuster or Whirl. A bot with a alt mode of a NASCAR track car would probably be the last thing they'd think of. Yet, here we are in DOTM with three such Wreckers. The first one we'll explore is Topspin.

A couple of quick notes on the packaging. For the Deluxe cards, you'll notice that the clamshell follows the curvature of the moon on the cardback. You'll also spot that the clamshell has 'craters', just like the moon. A subtle yet tasteful touch. Also, in relation to this figure and with Roadbuster, you NASCAR fans will be happy to know that this is a sanctioned NASCAR licensed product and contains the holographic NASCAR seal on the cardback as proof. You just might have found a way to get your NASCAR buddies into Transformers after all.

For Autobot Topspin, it's all about going fast and carrying lots of weapons. He, Roadbuster and Leadfoot were master technicians on Cybertron. Over the years they perfected modifications to vehicles, armor and weaponry that rival anything the Decetpcion scientists could ever hope to produce. 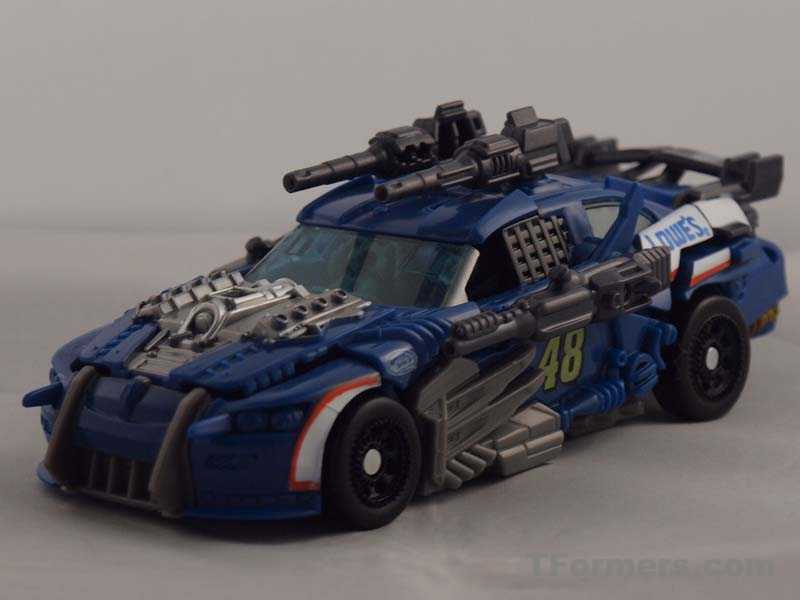 The alt mode is in what could be best described as a Brute mode. Based off of Jimmie Johnson's #48 Lowes Chevrolet Impala, there are a bevy of 'upgrades' that seem to be associated with this 3rd mode. It's an interesting spin for sure. 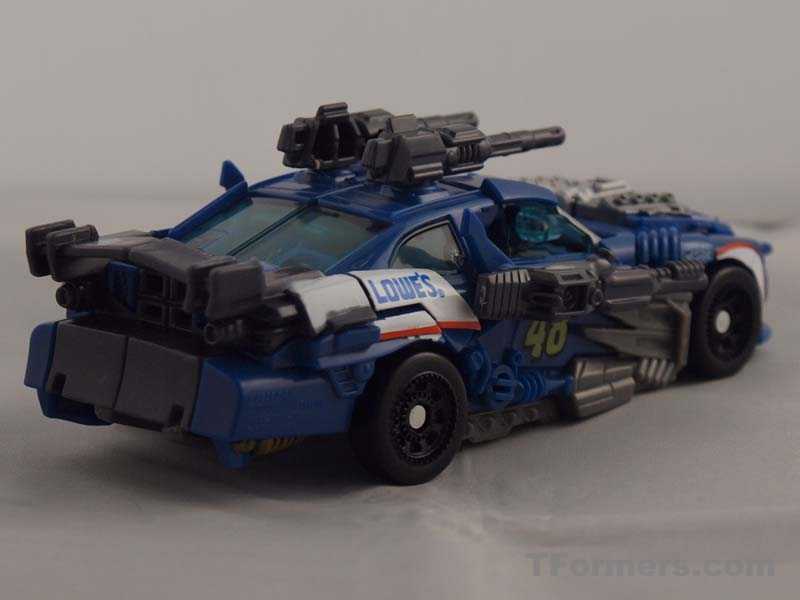 You can tell that underneath all that weaponry and armor, there's still an Earth based track car. The basic silhouette of the Chevrolet Impala bodystyle is still present, as are the track car elements such as the gated window and sponsorships. While maybe not entirely plausible in the real world, it makes enough sense to be a possibility. 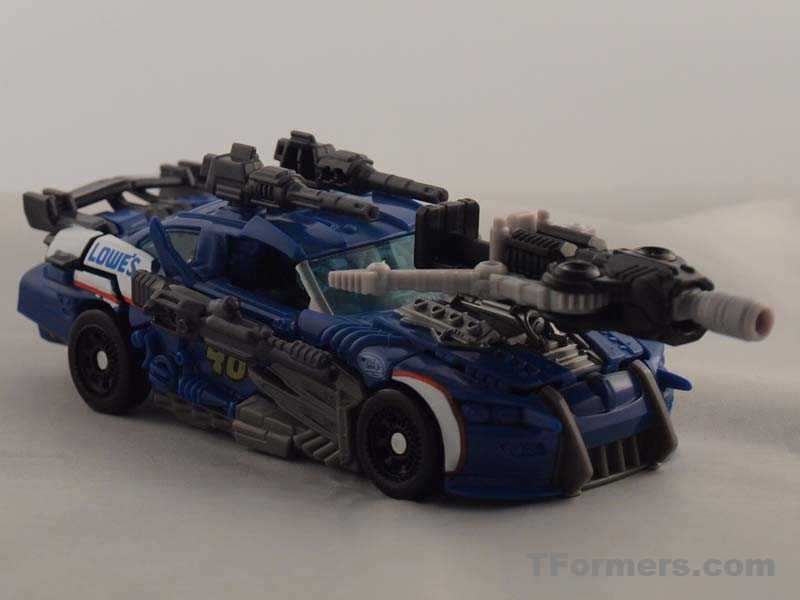 If the visual cues aren't enough, you also get some weaponry. Two cannons are mounted on the roof. You'll also spot a cannon on either side of the doors. To top it off, the MechTech weapon mounts right to the hood. When you press back on the gray clip towards the back, the 'crossbow' on the cannon acts as a claw. The claw doesn't lock in place, but it has enough reach to grap something beyond the hood.

Topspin's transformation is at some point very "Lockdown" like. Therefore, you might find the process eeirily familiar. He's a simple figure, the rear section has enough complexity to keep one interested.

The grille is a bit tight to tuck under the hood. Also, finding that sweet spot to mount the rear section as the shoulder packs might trouble you some, especially since the ball joints are slightly loose. 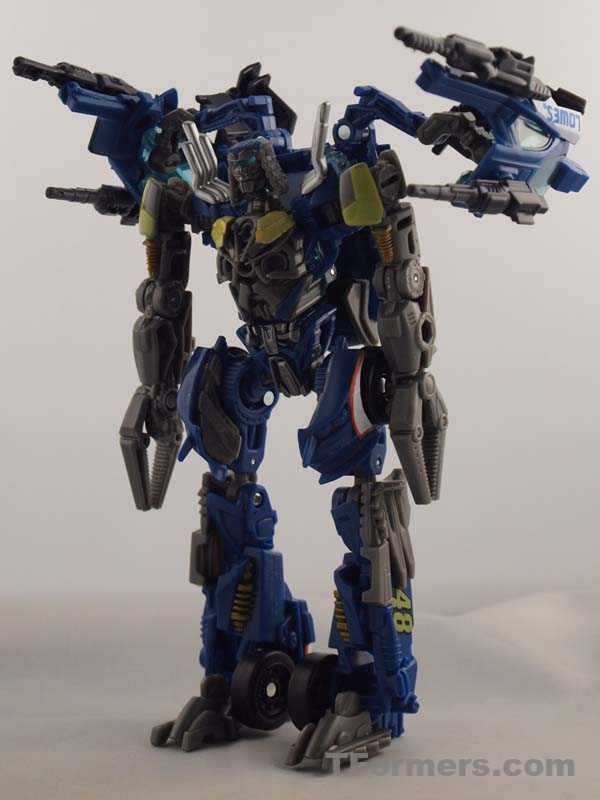 Topspin is one interesting looking bot in robot mode. The primary color scheme in the legs and chest is medium blue, with the arms being PVC gray. Some yellow and fluorescent green is mixed in for contrast. The head sculpt is rastafarian in appearance and features aqua pipes optics. Some might take issues with the shoulder packs, which are remnants of the rear section of the alt mode. However, they do have good functionality as addressed later on. 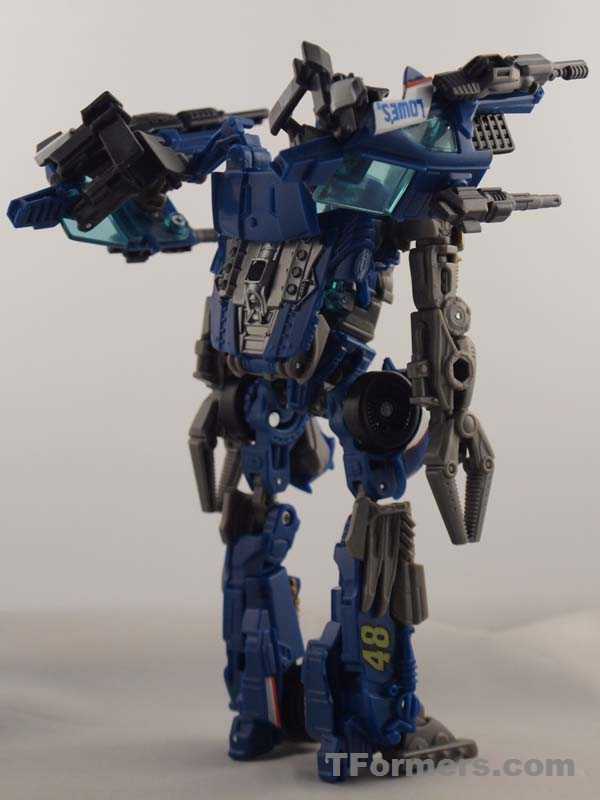 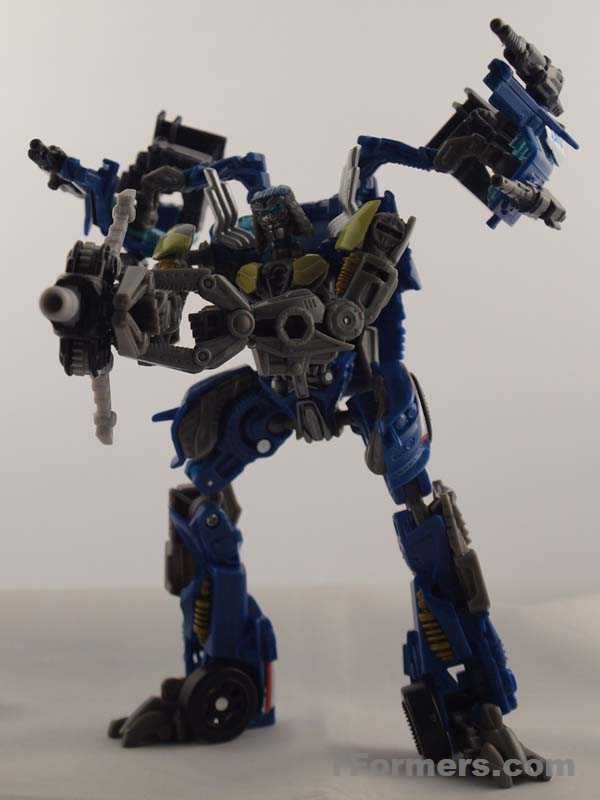 
Joints are set up extremely well. Due to the grill folding up behind the hood, waist movement is nil. If you were to, say, leave the grille hanging off the hood, you could pick up as much as 30 degrees of waist twist.

First, you have the shoulder packs. Each pack is independently adjustable to get the attached cannons where you want them to be. There is also the MechTech weapon, which can attach to either forearm. Being that his hands are already claws, having the weapon convert to a claw seems almost redundant. 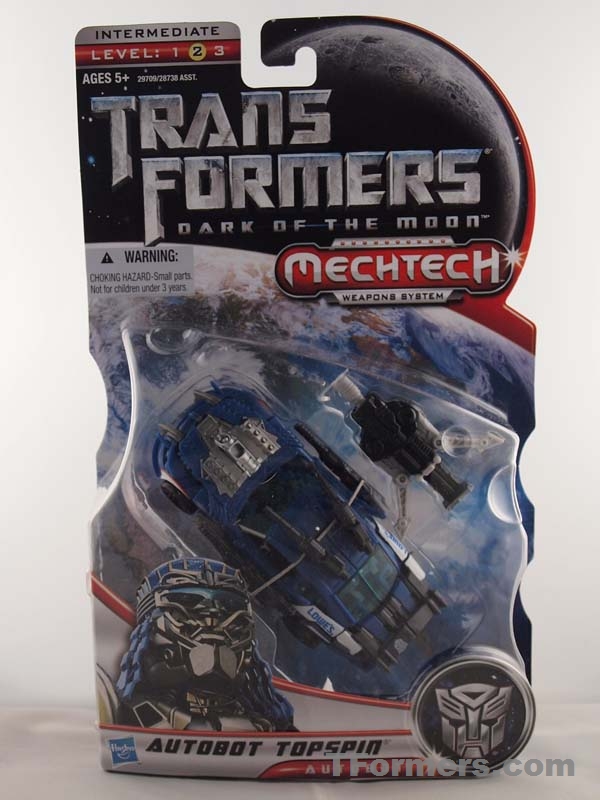 Topspin has some questionable aspects here. For one, the shoulder packs pop off rather easy, wearing the ball joint socket over time. The smaller cannons can also be pretty easy to lose. Finally, the tight space that the grille has to tuck under the hood during transformation can result in plastic stress if forced too hard.

For $12, you actually have a lot packed into this figure. Firepower is definitely present (even if the tech spec oddly doesn't suggest as much) and the MechTech weapon has usability in either mode. Some might not go for the claw hands, but if that's all that keeps you from buying this figure... well... that's your loss.

Some care is required, but overall worth the money.

It will be interesting to see if a Voyager mold comes out that lets the user transform between alt, brute and robot modes. As it stands, that's about the only thing that makes this figure from being pure gold. The brute mode is a nice departure from just a standard stock car, and the robot mode definitely has imagination written all over it. The Wreckers could very well steal the spotlight this time around.