Backfire - Dark of the Moon - Figure

Revenge of the Fallen showed us just how well Scouts could be made. As the line went on, we were presented with scouts of amazing build. Hasbro has decided to head a different direction this time, however, by making the Scouts part of the Human Alliance class. Now, scouts are packed with a human ally along with a 3rd "weapon" mode. Our first look at this new class will be Backfire, who is partnered with Spike Witwicky.

It was only natural that a robot with as much skill at combat on a crowded road would be paired up with a human specialist in urban warfare. Spike Witwicky and Backfire make the perfect team. Together, they stalk the Decepticons in secret through some of Earth's most crowded and confusing cities. 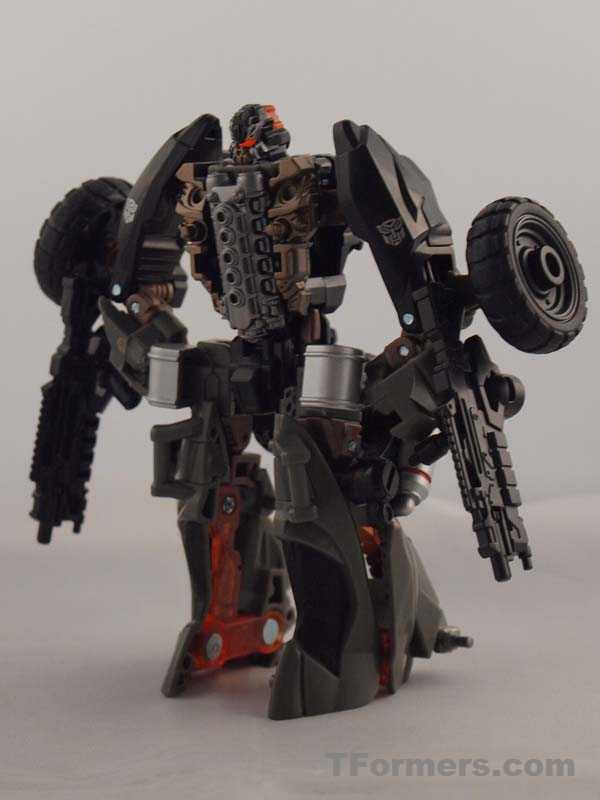 Backfire is mostly gray in the legs, with a silver/copper chest and black/copper forearms. He is flanked with an Autobot insignia on each shoulder. One major fault of this figure is that the wheels stick out like a sore thumb, especially in the forearms. While it doesn't hamper with anything, it does look out of place. The head sculpt is a tad smallish but features orange piping. 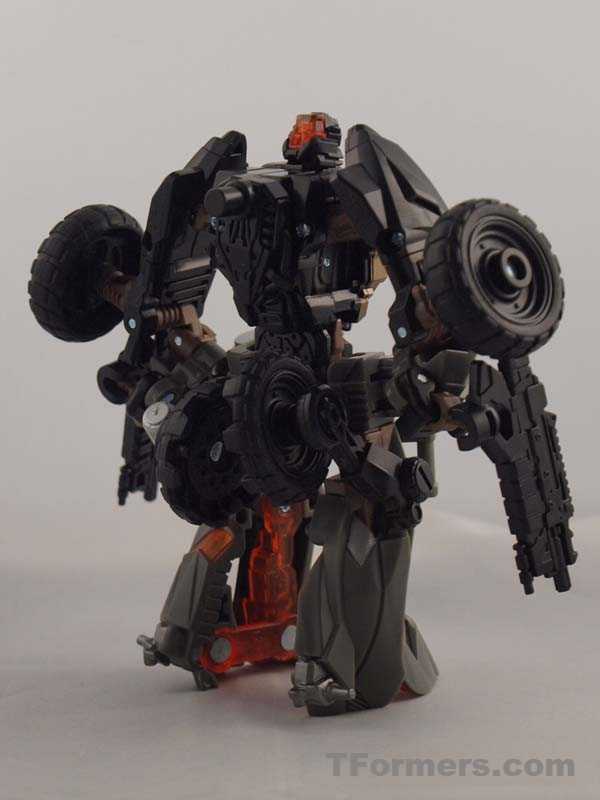 Backfire features 2 clip on cannons that can clip to the rails on his forearms or legs. With the stubby forearms this figure has, having the rifles clip to the end helps offset that some. Overall, Backfire is decent for a scout because, until recently, scouts didn't even come with weapons. 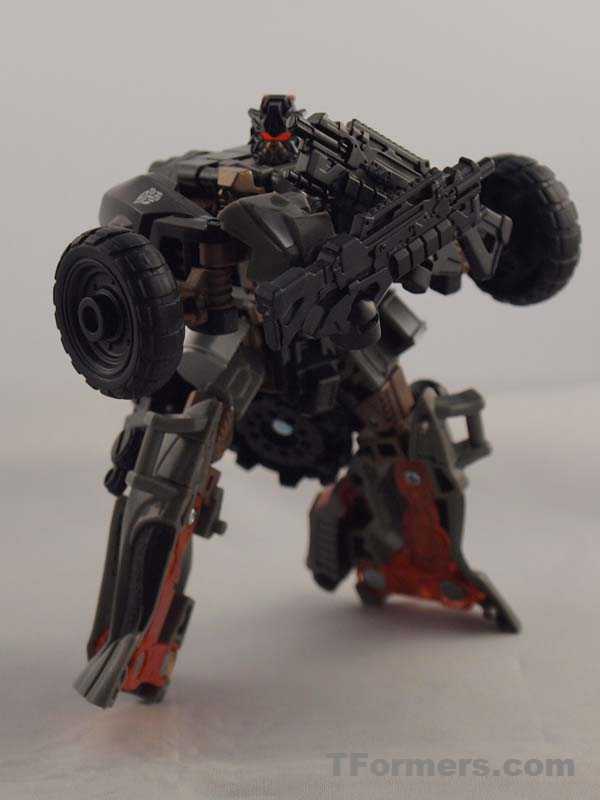 
The tiny forearms make for little poseability on the arms. The legs have good range, but it will require positioning the wheels on the legs.

Robot Mode Summary:Not bad for a scout, but better is out there. 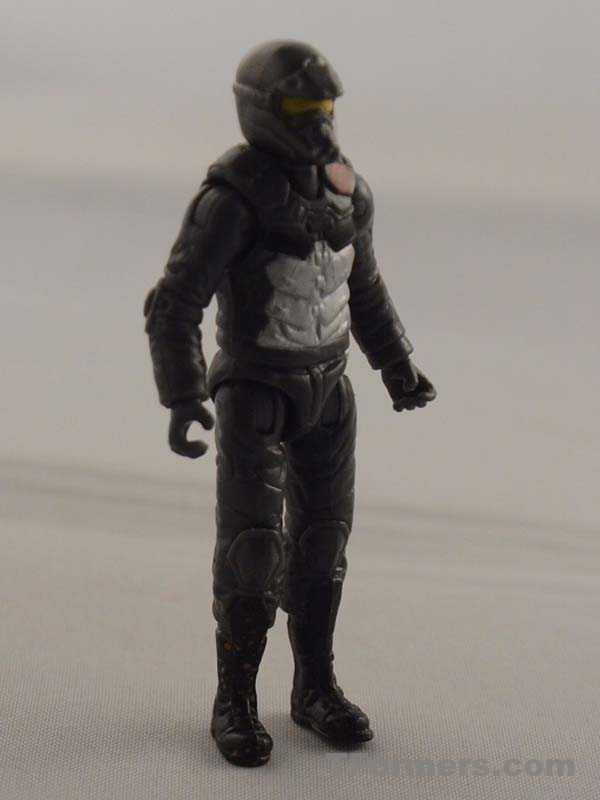 Curiously enough, Spike Witwicky makes an entrance to the Movieverse as Backfire's human ally. He' in an all black rider's outfit, sans the gray chest area. He also dons a helmet, leaving his facial looks to imagination.

Transformation is mostly simple. However, getting the wheels on the legs to flip around right usually results in them popping off their ball joint. You'll also want to make sure the three pegs on the real wheel halves are aligned. 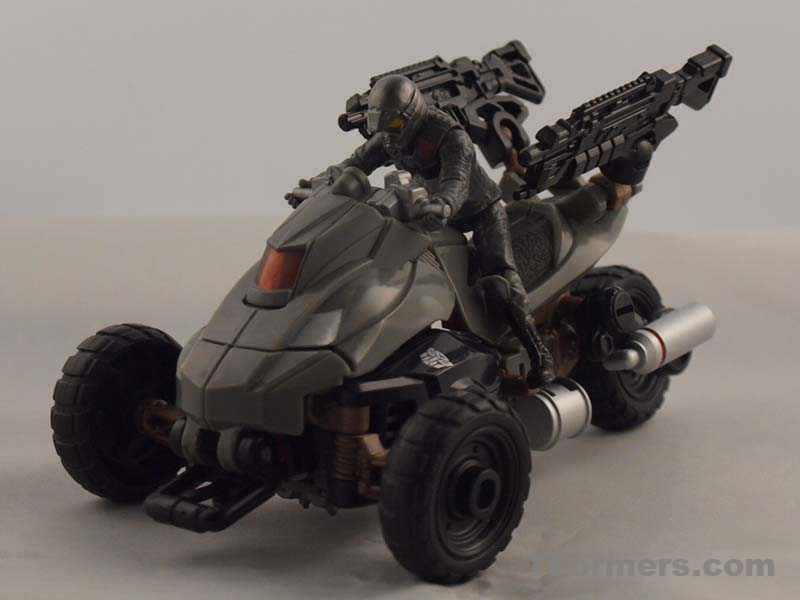 Backfire's alt mode resembles more of a Can Am than a traditional ATV. He is mostly gray and black with an orange headlight. He also sports dual fuel tanks. Spike can ride Backfire and his hands can clip to the handlebars. 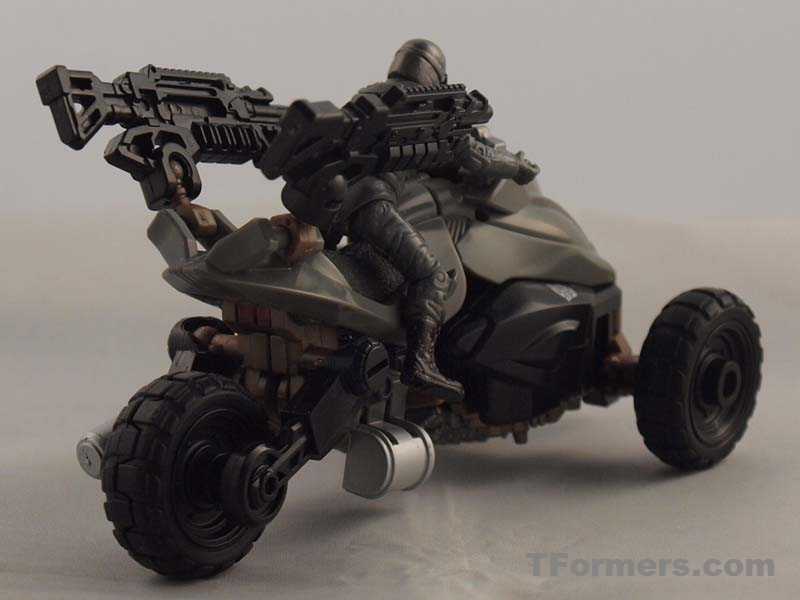 The two rifles clip on to the bars behind the driver's seat. You have the ability to aim the weapons as you please thanks to the ball joints that the rifles sit on. Backfire also sports a high ground clearance to match the rugged looks of his alt mode.

Again, the main thing you'll want to watch is the two wheels on the leg, as they tend to pop off their ball joint rather easy. Also, the instructions say to swivel the peg on his back towards the rear. However, I found that by leaving the peg swiveled forward, you give better balance. 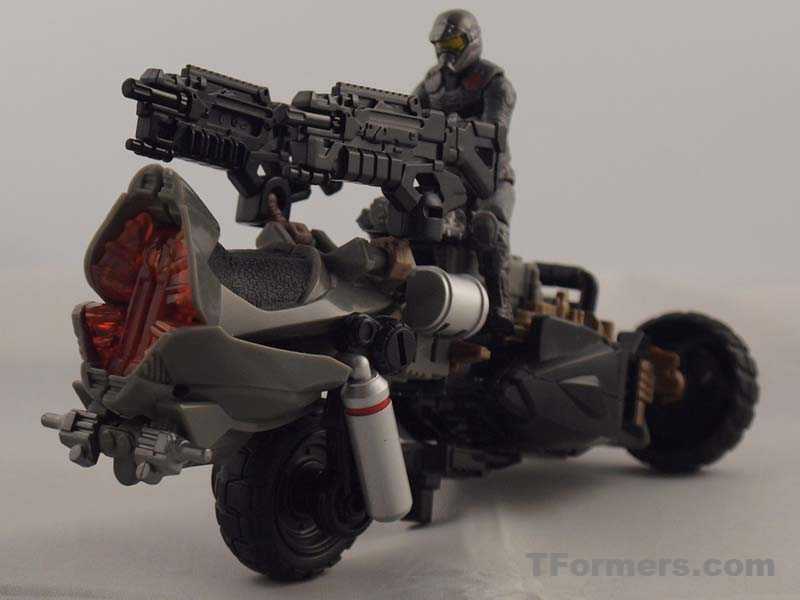 The weapon mode might seem like a mid-transformation at first, but it's actually unique. Not sure how Spike likes using the engine as a seat, but I suppose the suit is heat resistant. The rifles clip to the bars in front of the weapon frame, so that Spike can use them. The frame also moveable, with the rear wheels acting as a sort of pivoting device to spin the frame around. Inventive to say the least.

Weapon Mode Summary:Looks a bit goofy, but is quite functional.

There's a few things that can go wrong here. The rifles and Spike can easily go MIA. The wheel halves on the ball joints like popping off, which can make them a prime candidate for being lost as well. Other than that, the figure seems built for the long term. If this were a true Scout figure priced at $8, he'd be a good buy. However, packing a $2 human for the ride (which likely most won't care about) makes it a little hard to swallow.

I've never really been one for Transformer/Human sets. The humans are usually ill-painted and 'mount' awkwardly to his/her metallic partner. Surprisingly, Spike's paintjob was decent. He also interacts rather well with Backfire in weapon and alt modes. Backfire himself has some small shortcomings, but is an above average scout with a plausible third transformation. However, some might find a $10 more than they can bear. At least the human can be cannon fodder.