Sideswipe - Dark of the Moon - Figure

Sideswipe made his debut in the ROTF movie and while his svelte alt mode had fans, his robot mode as a figure didn't quite meet expectations. Sidearm Sideswipe came out later on a new mold and addressed a lot of the issues, but there were some lacking areas. Perhaps a third time's a charm, and this time, he loses his top to impress further.

Sideswipe confronts his Decepticon enemies on two feet with Cybertanium blades honed and at the ready. He finds projectile weaponry too easy. Nothing beats the blade. His Autobot pals seek him out for lessons on the ancient art of Cybertronian swordplay just in case they have to get up close and personal with a Decepticon. 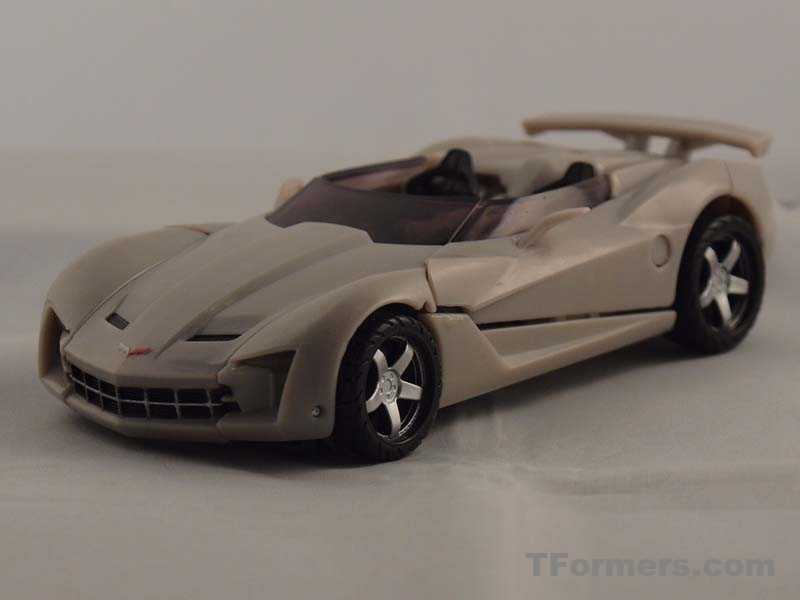 Sideswipe decided to go topless for the current movie, retaining the Stingray Concept bodystyle but opting for a Spyder look with a wraparound windshield and overall low profile. The hood also receives tweaks, changing the vertical slit headlight to a more traditional eyelet to the sides of the grille. A 'twin snout' grille makes a debut on the hood. I can't say this improved the look. I like the Spyder idea, but the charm that the original concept had is missing. 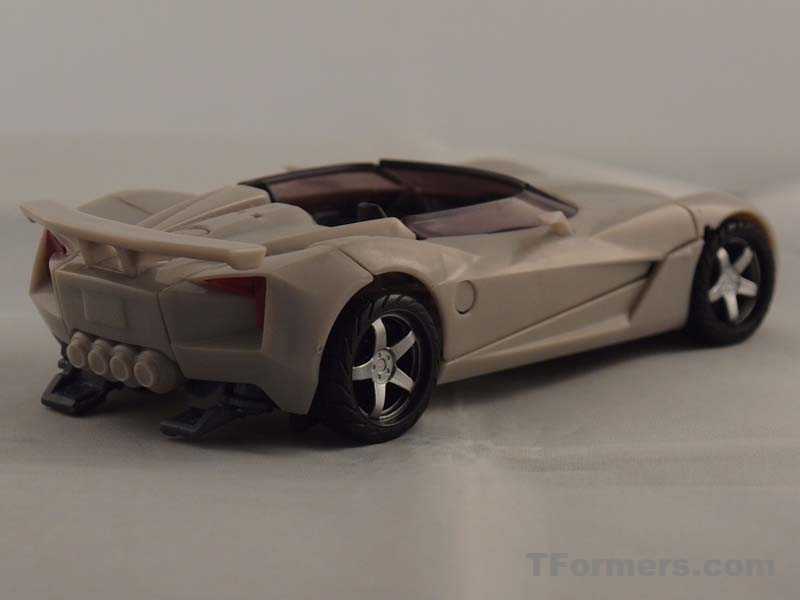 Not to mention that, besides seats and a steering wheel, the cockpit is wide open to the ground. One other complaint is that the door panels don't clip together very well so they tend to show seam gaps. As for the MechTech weapon, it mounts to the decklid and features a 6 muzzle cannon with scope. The gimmick will be mentioned later, as it is completely pointless in alt mode.

The transformation process is changed in several respects, but overall is mostly familiar. One word of warning: the hood can pop off somewhat easy and is a bear to put back on it's hinge. 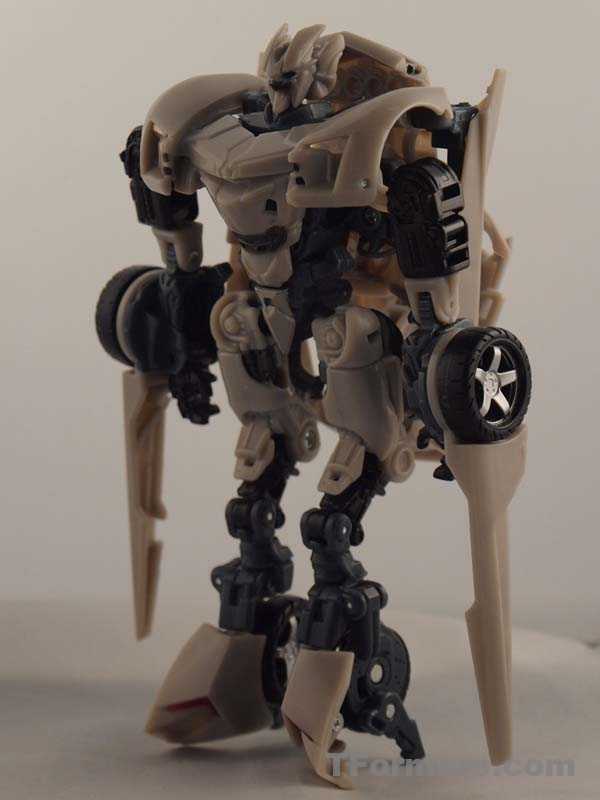 As much of a letdown that the alt mode was, the robot mode has several major improvements. Most noticeable are the legs, which aren't tied to a rubber 'strut' linkage as before. The footing is also much more solid thanks to the new foot pattern and haunches in the back. I still can't get used to the neutral color that he primarily uses, although it goes well with the gunmetal gray accents. He has aqua piping in the eyes to highlight his otherwise drab head sculpt. 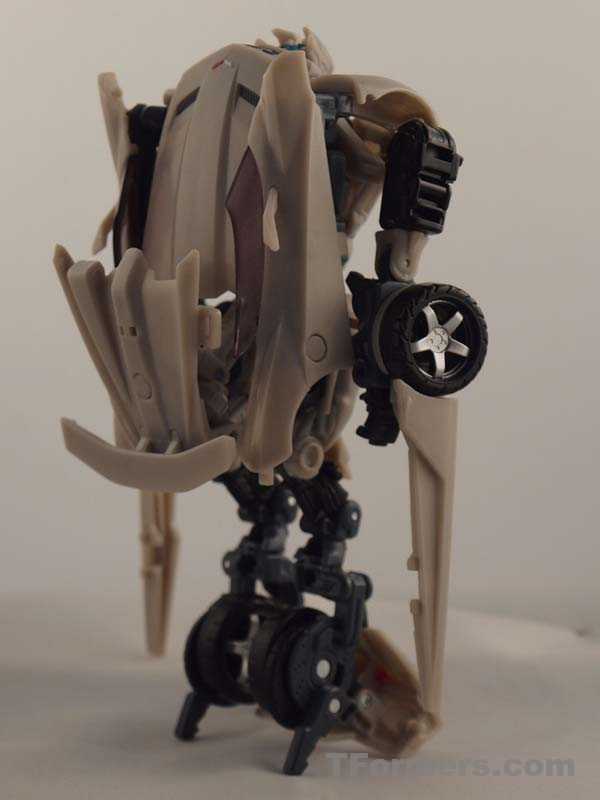 Although the fists are open, they are still 'pegged' to accept his MechTech weapon. Pushing on the back clip will flip out the Cybertanium sword (they couldn't think of a better word? Really?!). Unlike the Voyagers, this weapon doesn't lock in place. Therefore, it's kinda tough to have a swordsman that can't have a fully exposed sword. Maybe that's why he still has the swords on his forearms. 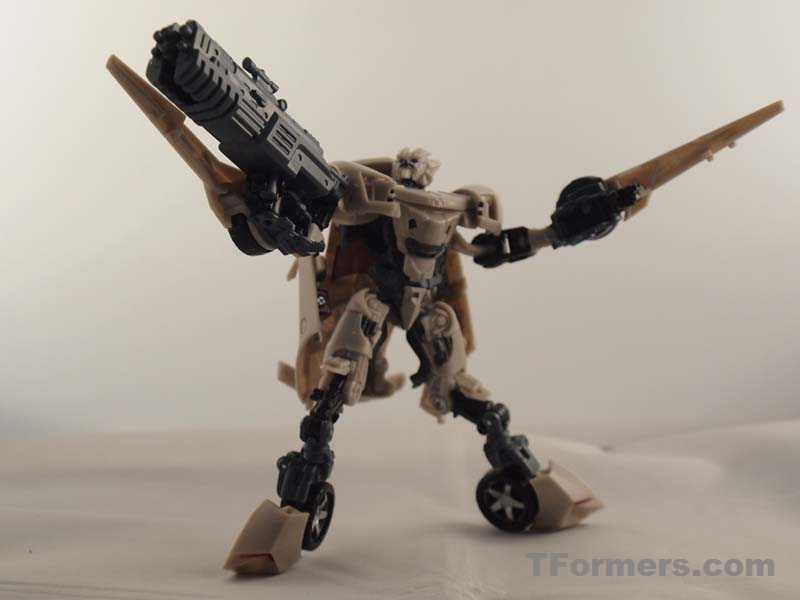 
There's still some restriction in the legs, but not nearly as much as when the figure first debuted.

This is only the third Sideswipe we've seen so far, barring renames. While it's not too hard to improve from the initial figure, this one still has some things lacking. The alt mode tweaked the front end enough to make it less appealing. The neutral toned paint job doesn't give any help either. While the robot mode is definitely an improvement, the legs still have limited articulation where it counts most.

I suppose a silver paint job would have made the difference here, but it's still pretty hard to beat Sidearm Sideswipe as the definitive version. This figure certainly has it's merits, and in the right hands it could be improved upon. However, as it stands, it's perhaps a 2nd string purchase at best.