Last year, Ratchet was released as a Deluxe class mold. The results weren't exactly positive. The rear panel could easily develop stress marks and the paint job was over the top bright. Combined with the flighty gun that had a hard time staying in place, it ended up being more of a pain than a want. Hasbro gives it another try by going back to roots, sort of, and gives us a whole new mold.

Autobot Ratchet has dedicated his life to healing the sick and repairing the wounded. Ever weapon he has ever carried has served a dual purpose as both a means of defense and a rescue tool. Even has he battles the Decepticons, his mind works overtime to process the most efficient means of saving his enemies' lives once the battle is over. 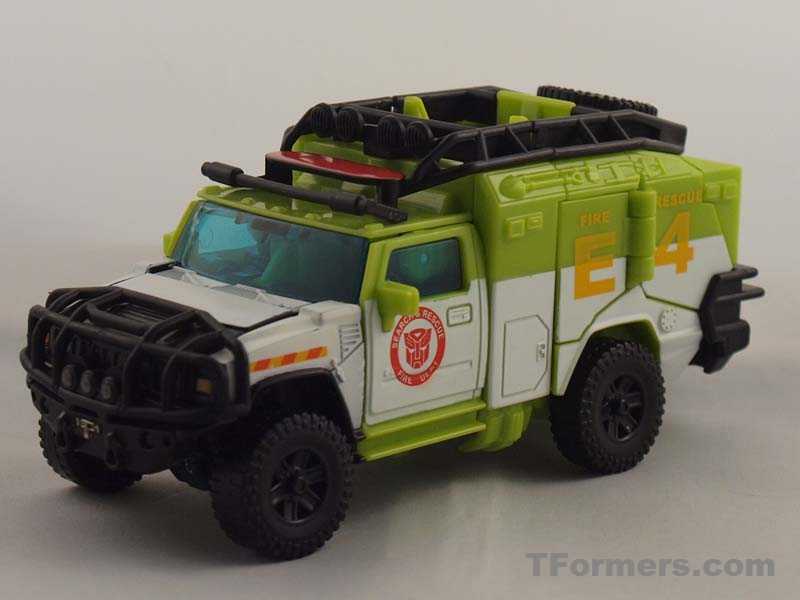 Right away, you can notice that this is an all new mode. Ratchet ditches the Baja style SUT body for the more traditional SUV package. The fluorescent green is now broken up by a big white strip going across the sides and rear. White also takes over the front end. The Autobot insignia on the doors is surrounded by a red circle reading "Search & Rescue Fire Dept". Overall, there is far mode detail in this alt mode than with the previous deluxe mold. 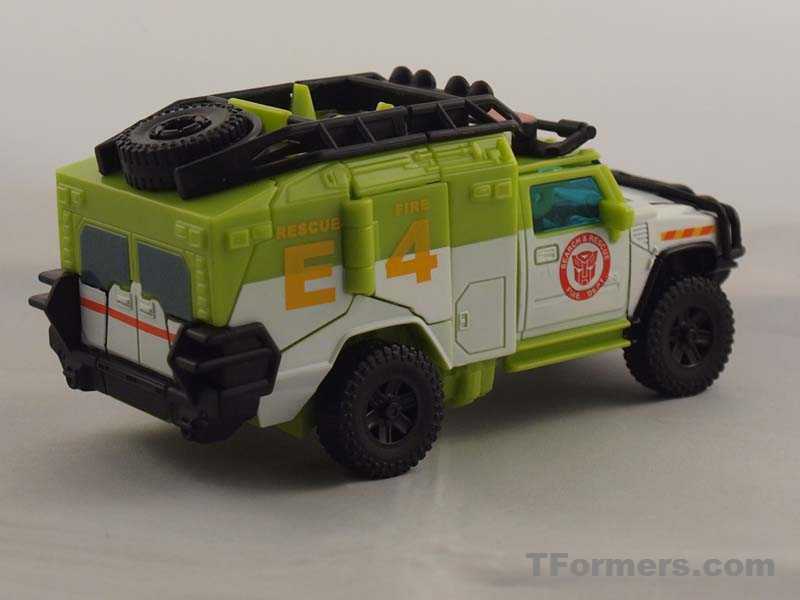 Ratchet is supplied with a large drum magazine type rifle that bolts on the the spare tire on his roof. Pulling back the hammer has no real use in alt mode, but does have a use later. Ground clearance isn't much of an issue when rolling. Although still somewhat low to the ground for a typical SUV, he has enough room so nothing should scrap on a flat surface.

Alt Mode Summary: A noted improvement over the predecessor, both in detail and in construction.

Transformation is definitely less nerve-wracking than the previous deluxe. None of the plastic catches or is subject to the type of stress that was endured previously. Overall, the process is very smooth doesn't have much hangup. 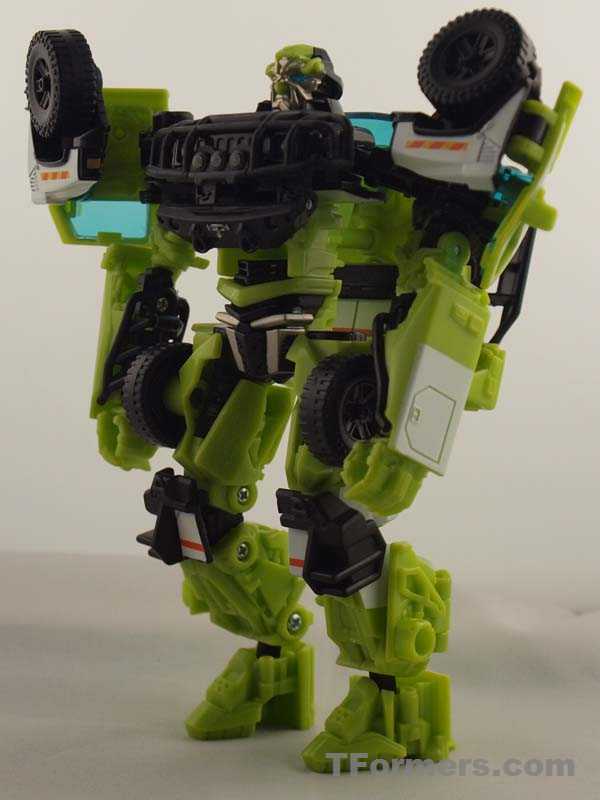 Ratchet also wins brownie points over the ROTF mold in robot mode. The green has definitely been toned down for the DOTM mold, which is a good thing. He also has regained some proportion, with the chest being larger and the legs being shorter. Even the head sculpt shows major improvement, and includes green piping. That's not to say he is perfect. Some might find issue with the backpack, which doesn't lay flush against the body and creates a gap. 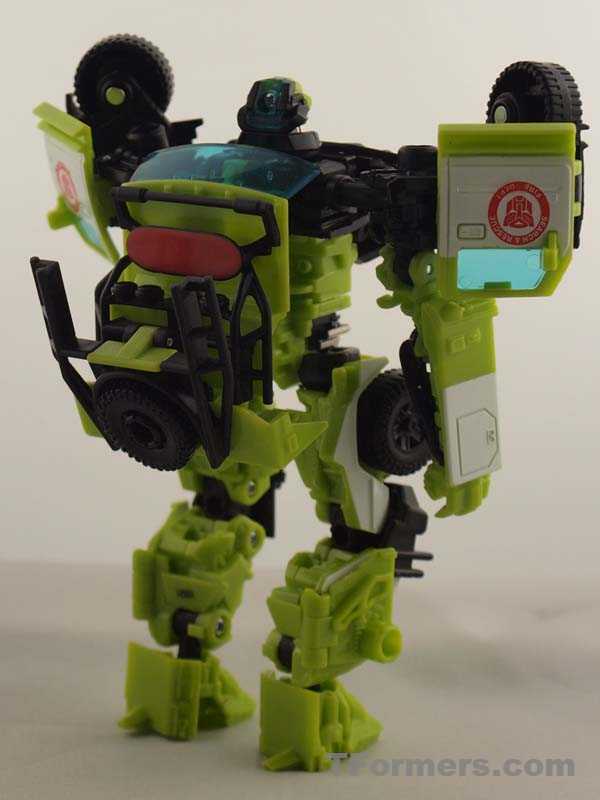 As for the MechTech weapon, it can be held in either hand. However, it is a bit loose and might swivel around on you. Pulling back on the handle will expose a circular saw blade. As a bonus, the blade will spin as it's being pulled out. You can also spin the blade freely while exposed. A little deeper peg or tighter grip would do wonders. 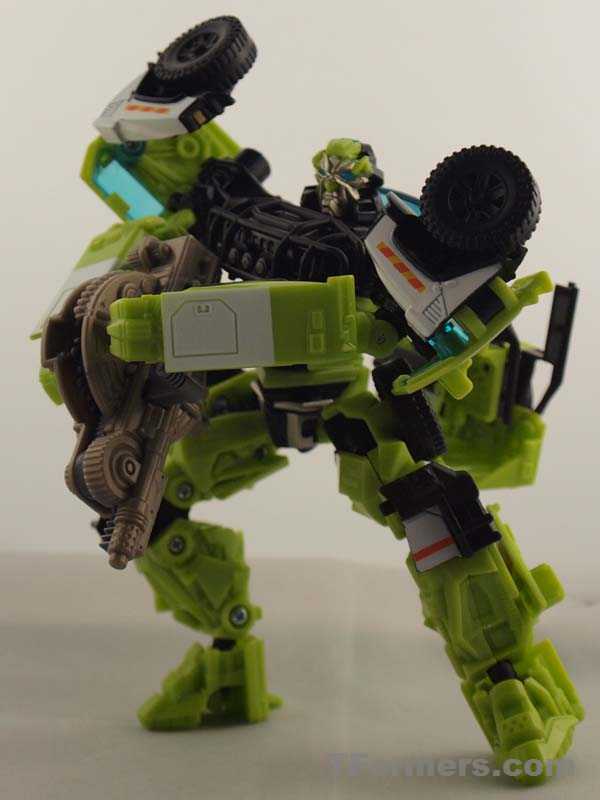 
One unfortunate change is that the footprint has shrunk, which makes balancing a little tricky. Besides that, no complaints.

Robot Mode Summary:Little more support on the footing would make this perfect.

Hasbro has made major improvements to this mold over the ROTF version. Most, if not all, of the complaints have seemed to be resolved. Where some of the other figures seem to suffer from lack of attention to detail, Ratchet seems to be brimming with it. As a plus, the durability issues have also been resolved.

Hasbro saw a need back in 2010 to give us a deluxe mold of Ratchet. However, it was mediocre at best with the soft plastic and overly bright paint scheme. With this Ratchet, they have successfully atoned for that 'sin' mold with the added detail and more fluid transformation that won't risk breaking parts off. Definitely one of the jewels of the line when comparing to established characters.