Barricade - Dark of the Moon - Figure

Barricade might have been served by Optimus back in the 2007 movie, but his character lives on in toy aisles. We have been treated to a few different repaints of the Decepticon police car. Now, we have yet another version hitting the streets. You might think it's the same old thing all over again, but a closer look will tell you otherwise.

Barricade doesn't make friends, he finds potential victims. His seemingly benevolent police car vehicle mode has been known to trick potential targets into trusting him. Barricade has the ability to stalk and eliminate nearly any Autobot he wishes. Humans and Autobots alike should take cover when they notice police sirens in the distance - it could be the last thing they ever hear! 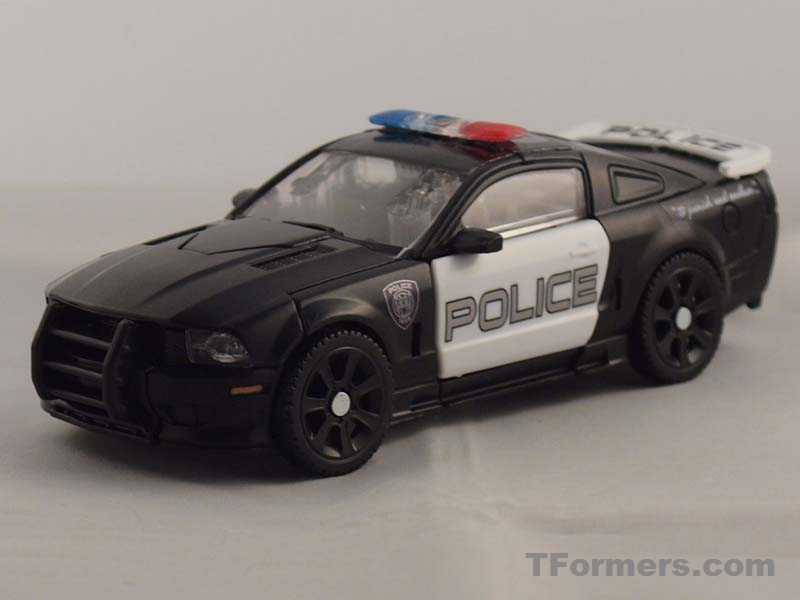 At first glance one would think "Oh, great. The same mold all over again!" That would be a forgiveable mistake, since the alt mode is almost exact to the 2007 original. The only visual difference is the inverted spoiler, which is now white with black "POLICE" script. Only by peering inside the clear windshield might you gather that this mold is not the same. 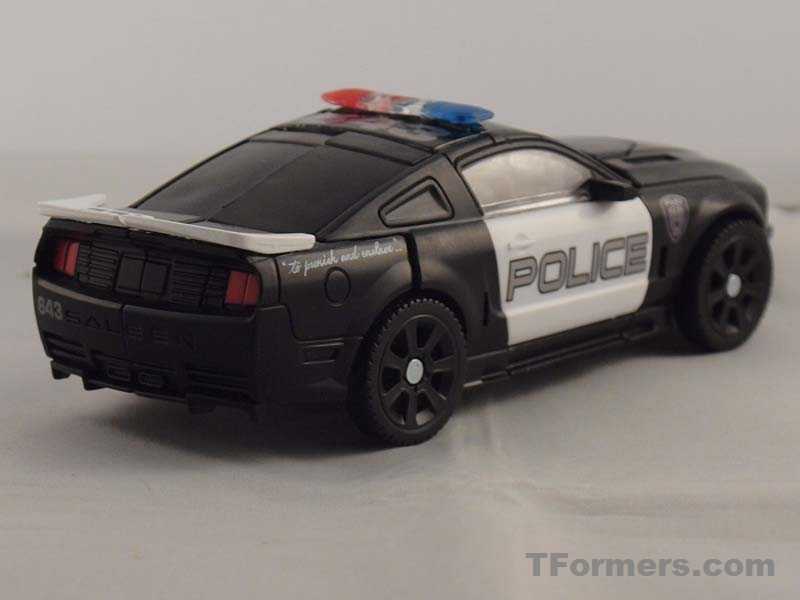 Of course, there is also the peg in this light bar. This mounts the MechTech weapon, which has a gatling gun barrel. Pushing the gray tab back will flip forward a claw. The mechanism is pretty gritty in actuation and due to it's design might not make the test of time.

Transforming Barricade will definitely clue you in that this is a completely new mold. While the arms have a familiar transformation, the legs are entirely redone, although not necessarily for the better. Folding the legs back into the cockpit right when converting back to alt mode can be a pain. 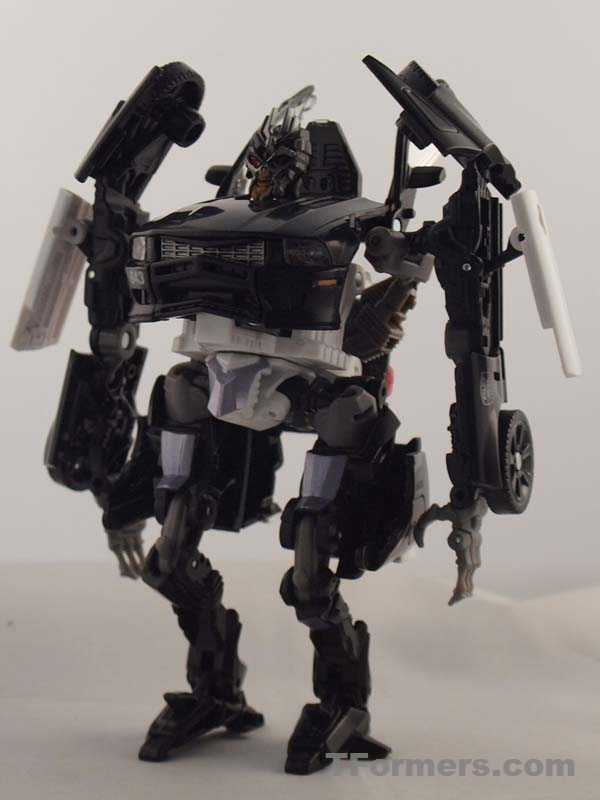 Barricade looks a bit stubbier in his robot mode than before. That could be due to him losing a good majority of his abdomen section. However, there are good tradeoffs to this. The legs are better proportioned and contain a better footprint. The arms are also greatly improved over the previous version. One part of the transformation that might be missed is that the doors can pop out from the upper arms. While Barricade's head sculpt is slightly revised, his lack of light piping in the eyes remains.. 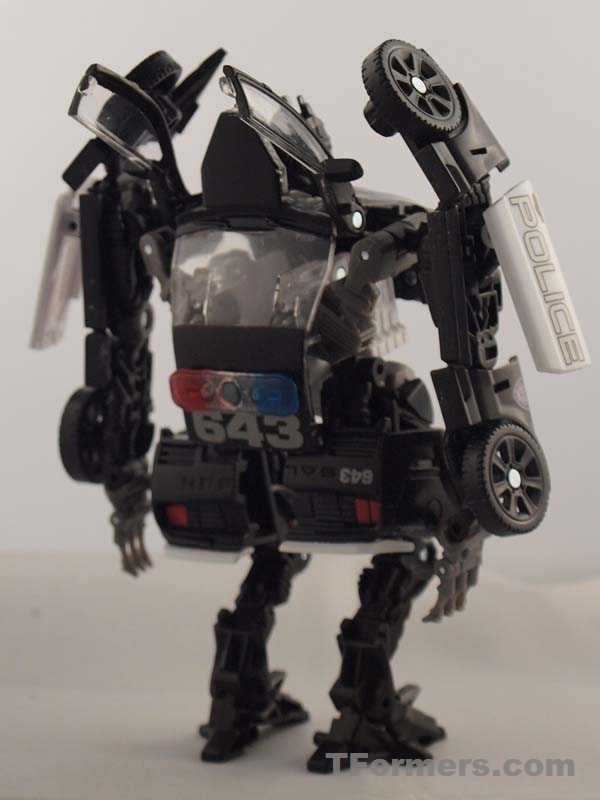 Barricade's hands features a joint on the main knuckle line. This will allow him to grip his MechTech weapon. Just don't expect a tight grip. Repositioning the figure will cause the weapon to spin around slightly, meaning a reset. The claw action on the weapon takes place of his 'robo-punch' that was present on the previous mold. 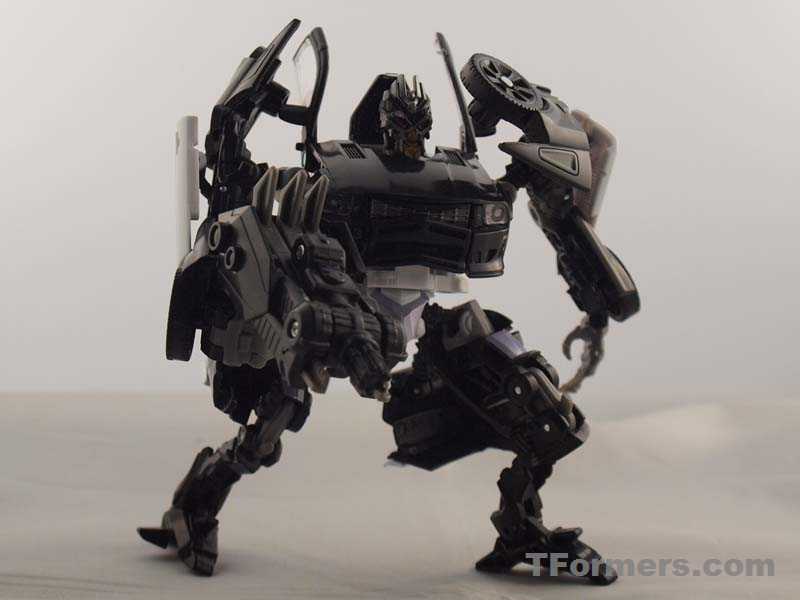 
The arms are interesting. Depending on how you twist the forearm, you get anywhere from 75 to 165 degrees of bend. This is where having the door 'wing' open comes into play. With the door closed to the upper arm, you'll get 60 degrees of bend no matter how you position the forearm. Also, be careful with the feet as they like to unpin fairly easy.

While there's nothing really new to see in the alt mode, the robot mode does have some improvements. Areas of concern are the MechTech weapon itself (due to it's construction) and the feet (which pop off easily). If you skipped over the several repaints that Barricade had over the last 2 lines, he's worth discovering again.

Barricade's robot mode might have gotten a bit chunkier with age, but age has also improved upon his core design. The only disappointment is with the MechTech weapon, which will likely wear out sooner rather than later. Refrain from using it a lot, and he could very well be the definitive Deluxe class mold.