Sandstorm - Dark of the Moon - Figure

Can a scout class figure really be a convincing triple-changer? So far, we have reviewed three scout class Human Alliance figures that claim to be triple changers. Only 1 has been modestly convincing of this tagline. As we dive into the 4th and final figure of this wave, we'll see if we can get a 50/50 split.

Sandstorm was built to survive for extended periods in the harshest climates. Anything Earth can throw at him, he can andure and come out smiling. he requires the same fortitude from his human partner, Private Dedcliff, a special forces wilderness survival expert with years of experience. Together, they hunt Decepticons in the most remote places on the planet. 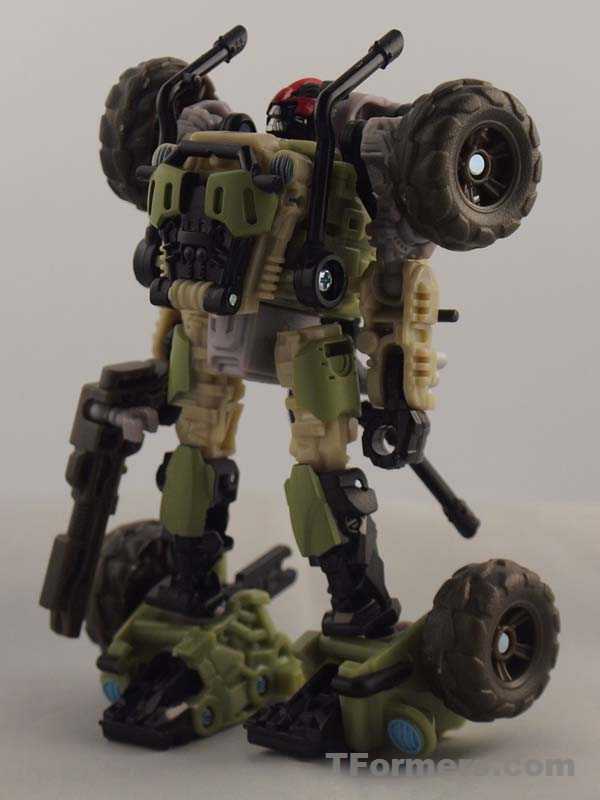 Sandstorm is an interesting mix of lime green and neutral. His lower legs, chest and extremities are black while his upper arms are PVC gray. Conversely, the head sculpt is all black save for the red forehead and silver face. The eyes are painted blue. Poor Sandstorm is a victim of kibble due to the rollbars jutting out on the shoudlers and back. They should have had a joint to collapse the back rollbar, as it just looks silly sticking out. 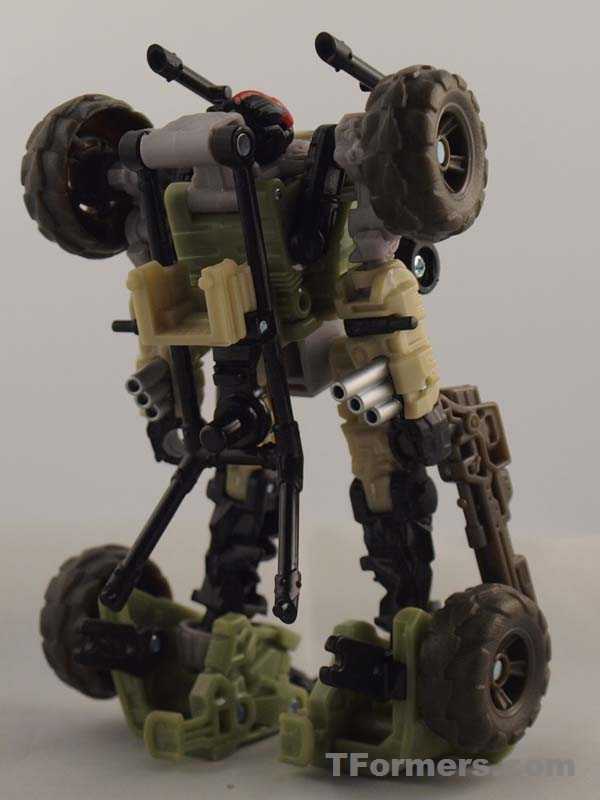 However the rollbars up front can work to an advantage. The rifle supplied with Sandstorm easily pegs into his fist, but can also clip onto the rollbar to make a shoulder cannon. Combined with his superior articulation, this makes you forget all about that rollbar in the back. 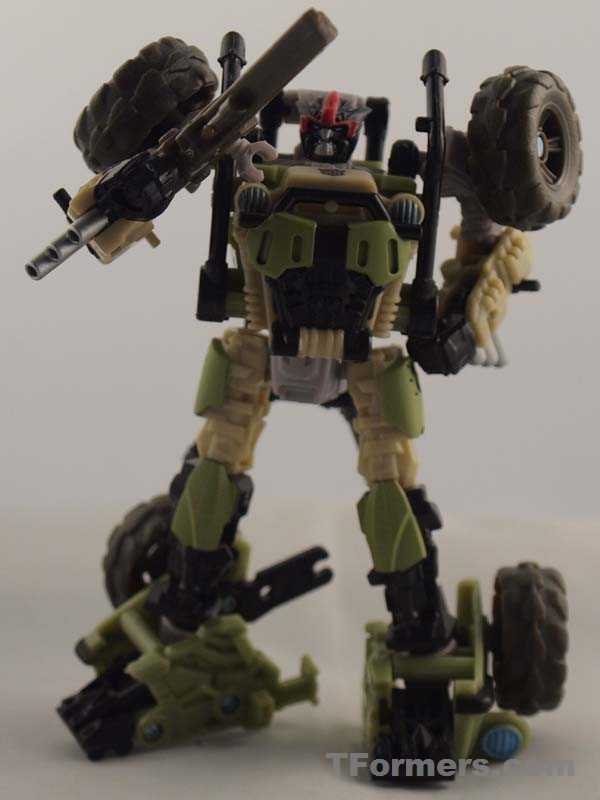 
Exceptional range for a scout class figure. The knees are the only concern, as the rollbar can get in the way at times.

Robot Mode Summary:Might be slightly flawed, but it's easy to get lost in him anyways. 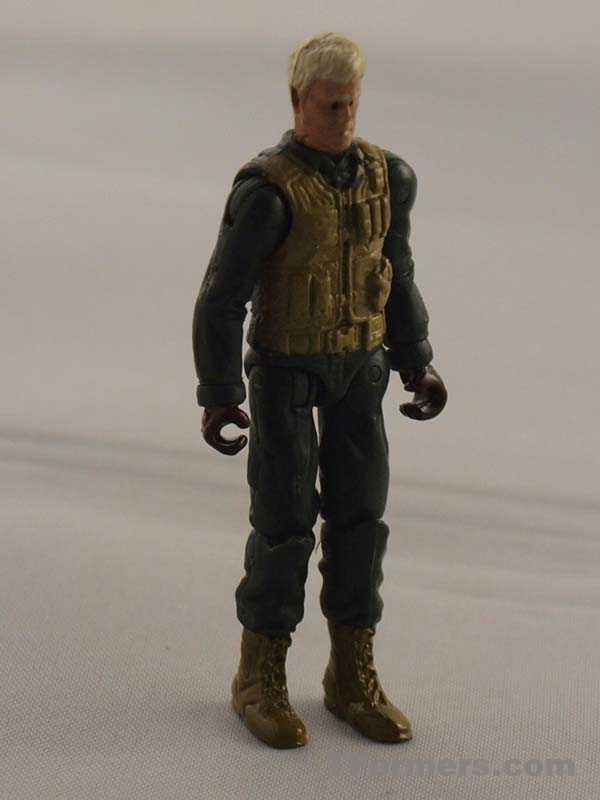 So how does a seasoned survivalist stay at Private class? He's nicely decked out in his survivalist vest and blue fatigues. Even his face speaks experience. However, his body isn't holding up as well, as my example suffers from a trick knee that can spin around 360 degrees, Ouch.

He has a trick transformation that involves some spinning around. Make sure to properly align the cockpit, rollbar and front end with one another. It's not difficult, but just takes overlapping the right parts together. 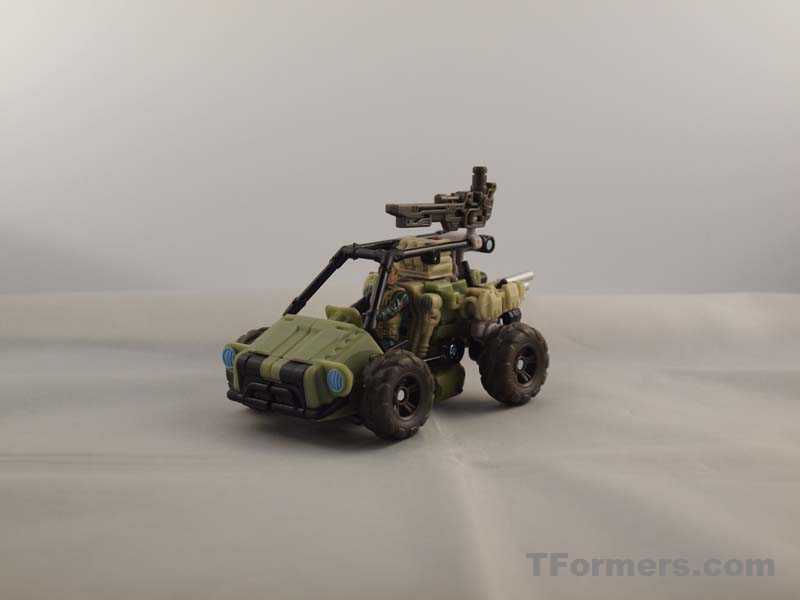 Sandstorm's vehicle mode is a dune buggy. the cockpit is open aired with a rollcage. He also features dual 3 piped exhaust towards the rear. Dedcliffe pegs into the seat for the ride. 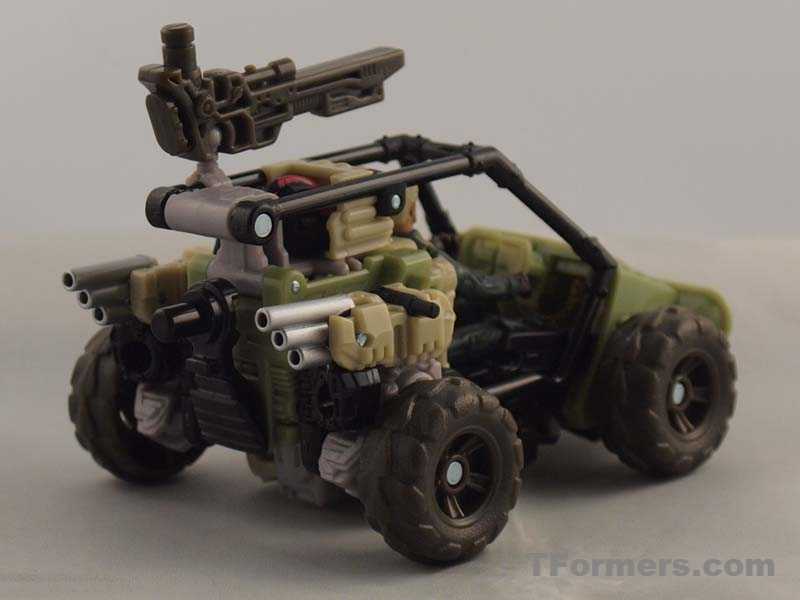 The clip on rifle can flip anywhere on the rollcageThat also includes the windscreen area, where Dedcliffe can use it as a weapon. While there will be some people who complain about this being a folded up robot, it helps to see this as a minimalistic vehicle mode. The robot parts are hidden well enough so that the vehicle mode is plausible

While not hard, the instructions can mislead. They show the struts folded out from the upper arms locking in, but technically they can't. Or, at least, not on my example. The holes cut into the lower seat area weren't large enough to accept the struts. 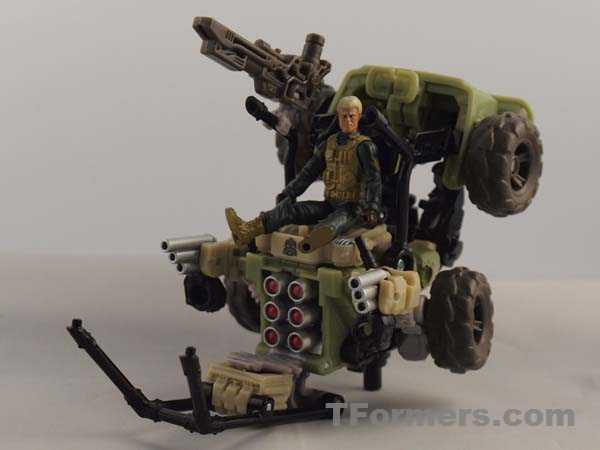 What you have is a stationary missile battery station. Dedcliffe sits in the station and has 6 missiles sitting underneath him. Talk about a hot seat. The rifle can also peg above his shoulder for combat use. The station is somewhat unstable, as the peg in the back will make it wobble to one side unless you have a flat surface.

Weapon Mode Summary:A stretch, but the one of the more believable weapon modes thus far.

The rollbars are a concern for durability. They are thin and could easily lead to stress in the long run. The clips behind his feet serve no real purpose so far as I can tell besides being in the way. Other than that, he's solidly built.

So far, the Scout class Human Alliance line has been a mixed bag. While providing a 'triple changer' tagline and a human ally, the 3rd mode is questionable on some figures seen this far. If Hasbro wants to make this experiment work better than Power Core Combiners, it better get more creative with all three modes. As it stand, Sandstorm has the best robot mode, as well as a solid vehicle and weapon mode. Right now, that's saying a lot.