Skids - Dark of the Moon - Figure

Skids might not be in the upcoming movie, but he certainly is making his way back to store pegs. He comes sporting a new paint job and a new mold. Being that his former mold had some issues, we'll see if this new mold is has enough improvement to keep him off the shelves on a long term basis.

Autobot Skids has learned a lot in the last few years. Frequent battle has hardened him, and partnership with humans has made him more sensitive to the value of life. Now, though hi is still an eager warrior, his first priority is always the defense of those under his protection. 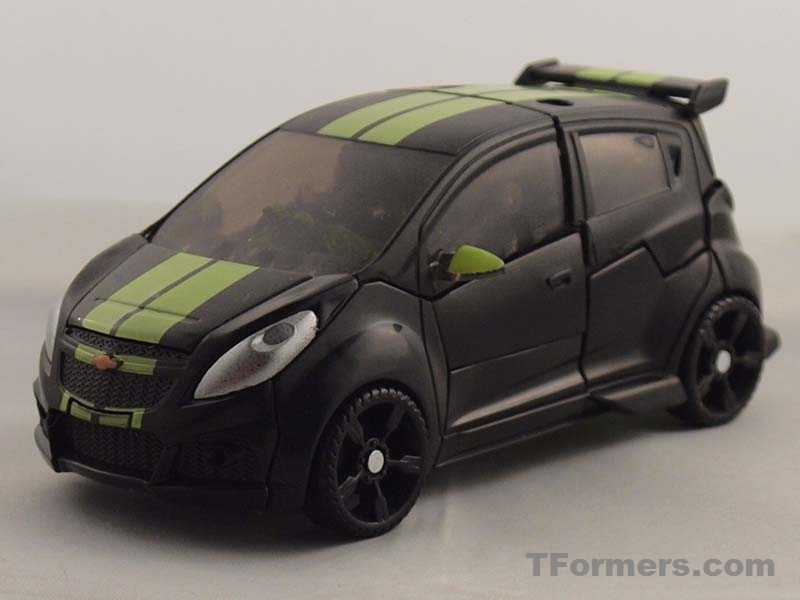 The Chevrolet Beat concept remains the alt mode of choice for Skids. However, the coloration is wildly changed. Now sporting a black paint job, he has dual neon green comp stripes racing from the grille to the rear hatch. Other than the side view mirrors, everything is pretty well blacked out. The headlights are painted silver, and the lights in the back are appropriately painted. All the windows are tinted. 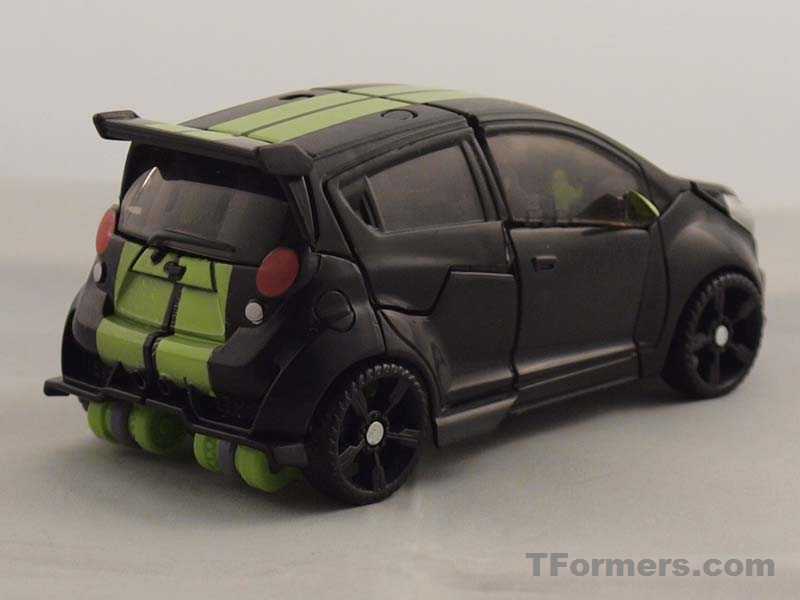 The MechTech weapon can peg on either side of the roof. Normally a single barrel rifle, the target scope can be pushed back to convert into a double barrel rifle. While the main elements of the Beat are preserved, the seam lines for the panels is much cleaner this time around. Some minor paint apps to some of the detailing found on the mold would be the only real improvement.

The transformation sequence gets a welcome improvement. The roof assembly in particular gets a much smoother sequence that doesn't involve as much friction between panels as before. 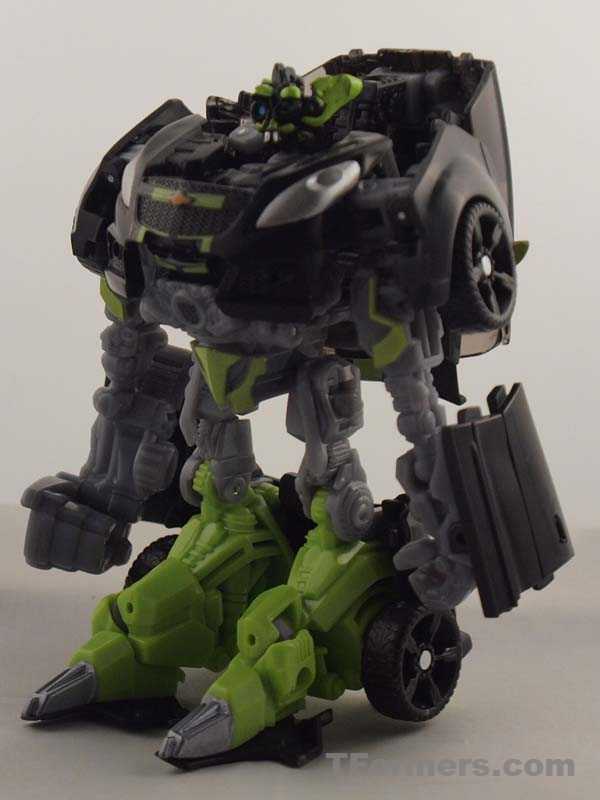 The first thing you'll notice about Skids in robot mode is that he's... small. That's not a visual illusion, as he lost 3/4" of his height versus the previous mold. All that height must have went to his feet, because they'd make Bozo the Clown blush. On the bright side, at least he has spectacular balance now. The head mold is still dorky as ever and features painted blue eyes. 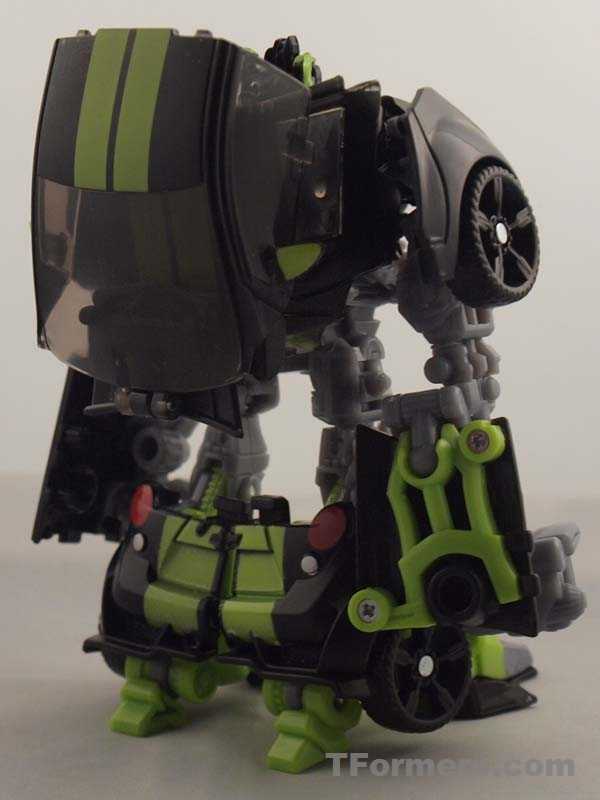 Skids still has the oversized right hand, but it doesn't have the gimmicky punch action anymore. The MechTech weapon will fit into either hand, but you might have to work it a bit into the right fist. As another option, you can also plug the weapon into his right forearm. 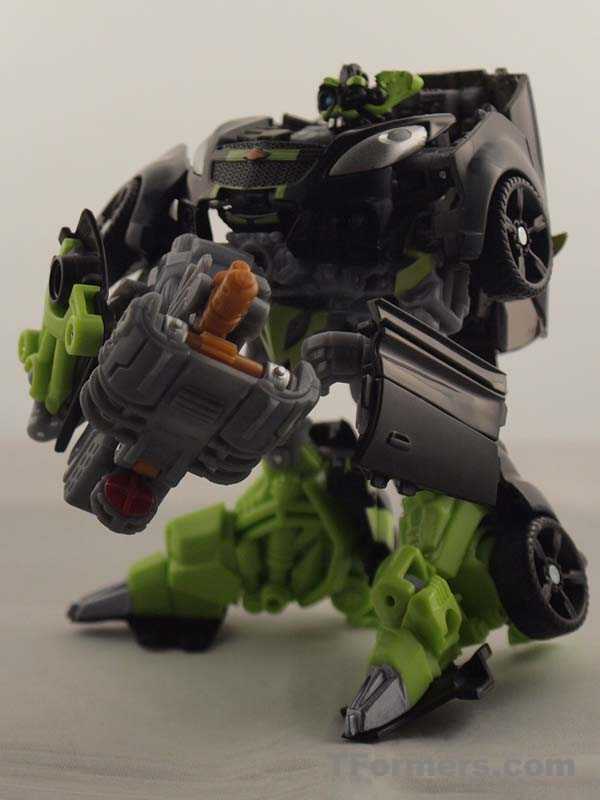 
Skids had to suffer somewhere, and that somewhere is the legs. The knees are set up in reverse, so there's no knee joint. The forearms are also a bit on the stubby side.

In some ways, Skids is a better value than the first time around. You're less likely to stress panels and everything is pretty firm. On the other end, this figure is about tradeoff. The lack of leg articulation definitely hurts. Combine that with the smaller stature and misproportioned arms and it's a real tossup as to whether this figure is better than before

Fans haven't afforded Skids much love. That's very possibly justified. Hasbro's latest attempt to give Skids some love has gone horribly wrong. While the alt mode shows improvement, the robot mode ends up looking squashed. Like you pounded your fist into a lump of Play-Doh. While he has some merits, he definitely should be left as a 2nd string purchase. There are much worthier Deluxes out there.