Since the first movie, some fans have been clamoring for an interactive playset where the figures could be used in conjunction with a platform and backdrop to supplement one's imagination. That day has finally come, as Hasbro combines Legend class figures with their own accessories.

Starscream is a master tactician and pilot, and a dangerous fighter whether he's on his own, or behind the controls of a Cybertronian assault craft. Only the most foolish Autobots dare to challenge him in the air, for that is his element. With enough firepower at his disposal, there's no battlefield he cannot control absolutely. 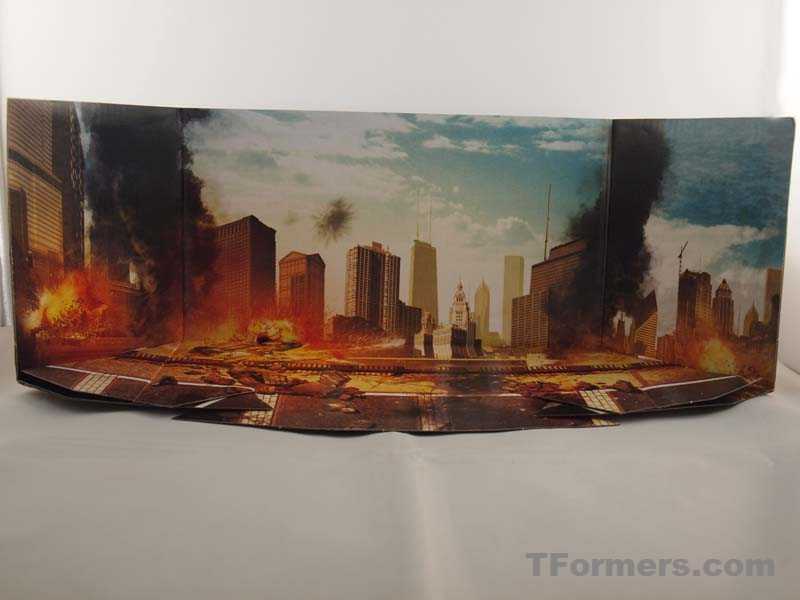 Part of the feature for the Cyberverse playsets is that the inner box converts to a background that you can use. In this instance, we get a background of a city under siege. The base is a city street, while the backdrop features fires and rising smoke. 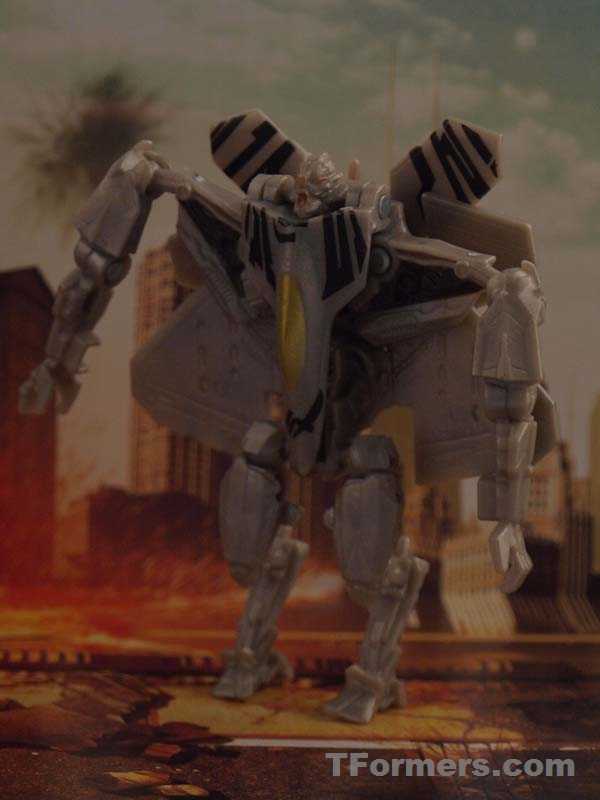 The character of honor for this set is the less than honorable Starscream in his Legends class guise. Although the elbows and knees are static, it's not a bad mold of him. The only minor complaint is that mine has a loose right shoulder, which is riveted in. 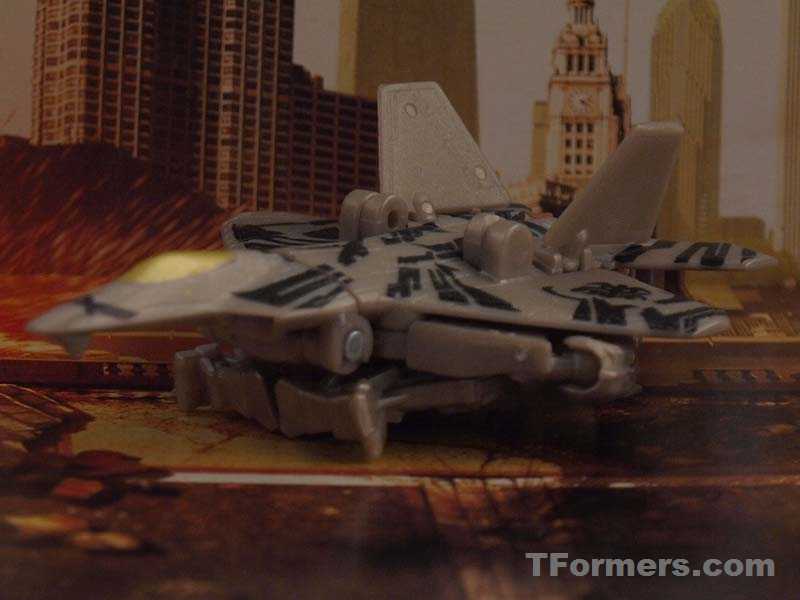 The jet mode is surprisingly clean. Kibble is limited topside to 2 hinges just forward of the tail assembly. The underside isn't terribly bad, but the hands do stick out past the horizontal stabilizers. 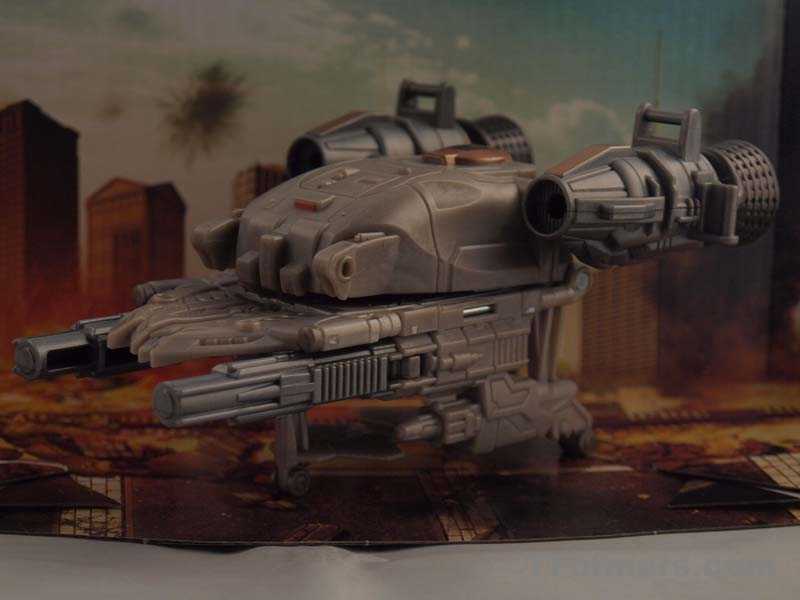 Starscream is paired with an orbital assault carrier. It looks menacing enough, with a heavy duty cannon on either side and smaller laser cannons just below. The laser cannon on the right doubles as a launchable missile. Two massive engines power the carrier. The whole carrier rides on a 'cart' with 3 wheels so you can roll it along. Starscream can park 'inside' the carrier by opening a trap door on the bottom of the carrier and sliding Starscream in. Just hope he doesn't mind riding backwards.

Flipping the engines around and flipping out a few panels will yield the 2nd mode. Don't forget to disconnect the launcher and place it on one of the engines. 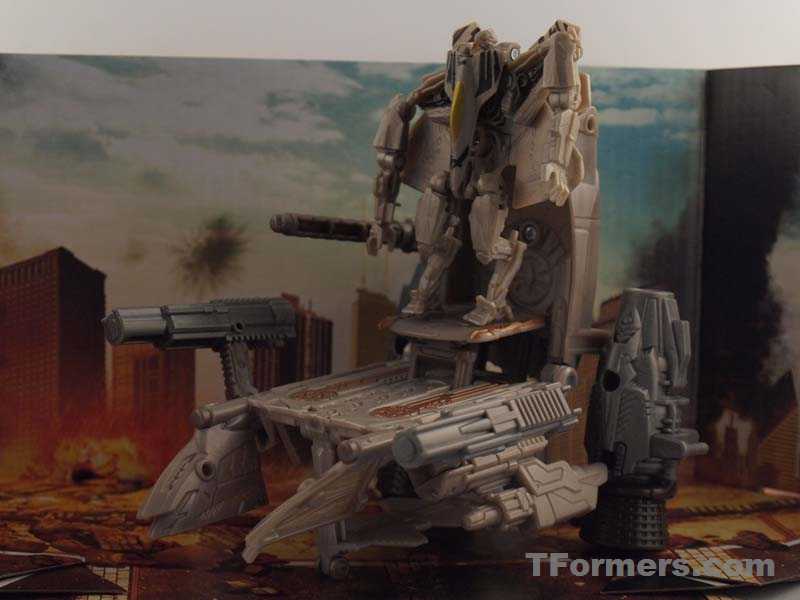 The battle station resembles a sort of armed throne. Starscream is obviously too small to sit on his throne, but a scout might be able to pull it off. The launcher can mount to either side of the 'throne'

Transforming to cruiser is easy. Simply convert back to carrier mode, then flip the pod back. 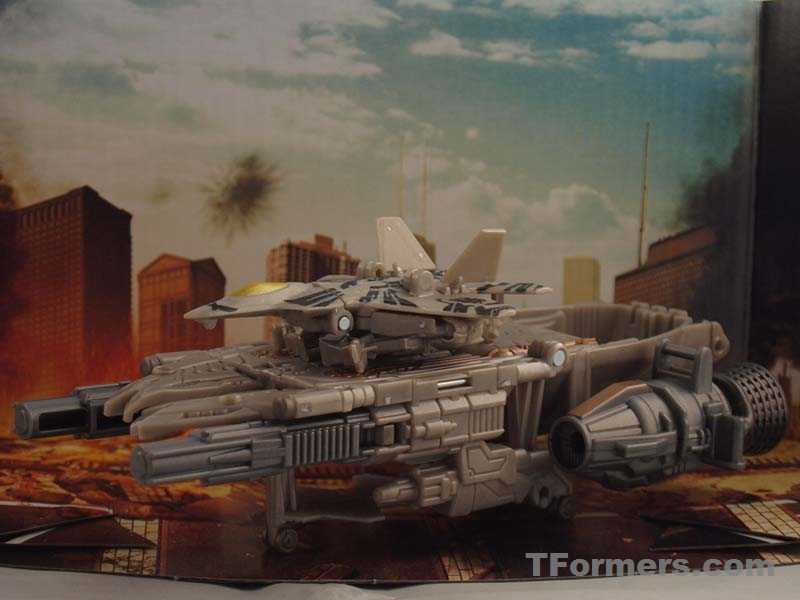 While this does have a sleek look to it, the open back kills it. An additional note should be added. On the engines are two bars. You can use the clip-on weapons found with the HA scouts in tandem with the carrier/cruiser to fortify it a bit if you wish.

$15 is a lot of money for something that is honestly pretty simple. Adding the background to it is a nice touch, but in all honesty how well are those backgrounds going to keep over time? On the plus side, both Starscream and the carrier are pretty well built, so there shouldn't be an issue with missing/damages parts over time other than the launchable missile.

While I personally feel that $15 is a bit much for the set, I'm also not one that feels need to accessorize my figures. For those who have been waiting for a setup like this, this should hopefully fill the need. The cruiser mode is questionable, but the other 2 modes seem to work nicely. As more of these sets are released, is should be interesting to see how the line evolves further.