Need something to do with your Legends figures? Hasbro thinks they have the answer with the Cyberverse playsets. We previously looked at Starscream's playset and concluded that it might not be the interaction some fans are looking for, especially at the pricepoint. Now, we look at Bumblebee and his mobile assault bunker.

Bumblebee is known among the Autobots as a skilled fighter and peerless spy, but he rarely works alone. In addition to his teammates, he has also been outfitted with a huge amount of gear that supports him an any situation. From recon missions to a fight to the finish, Bumblebee always makes sure he has the right gear for the job. 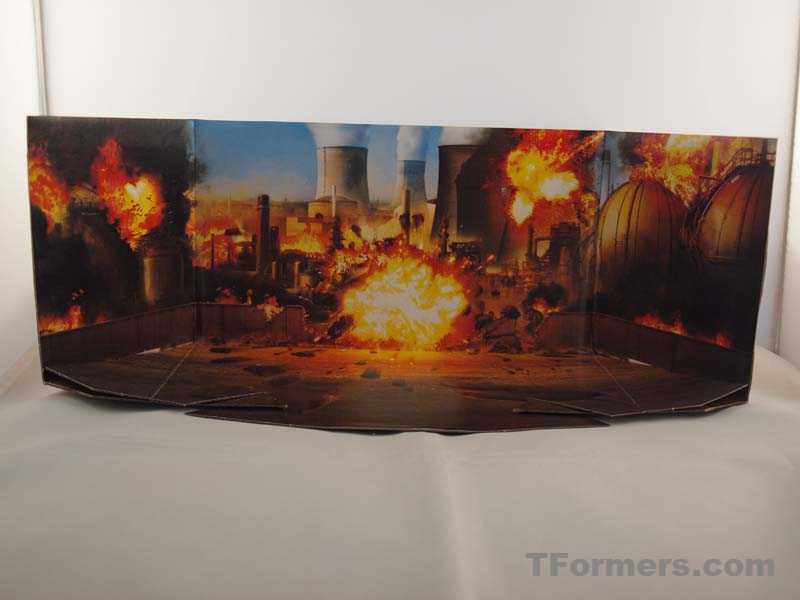 For this battle scene, we get a heavy industrial section under siege. While there are a few cooling towers in the distance churning away, the immediate area is full of storage tanks exploding. 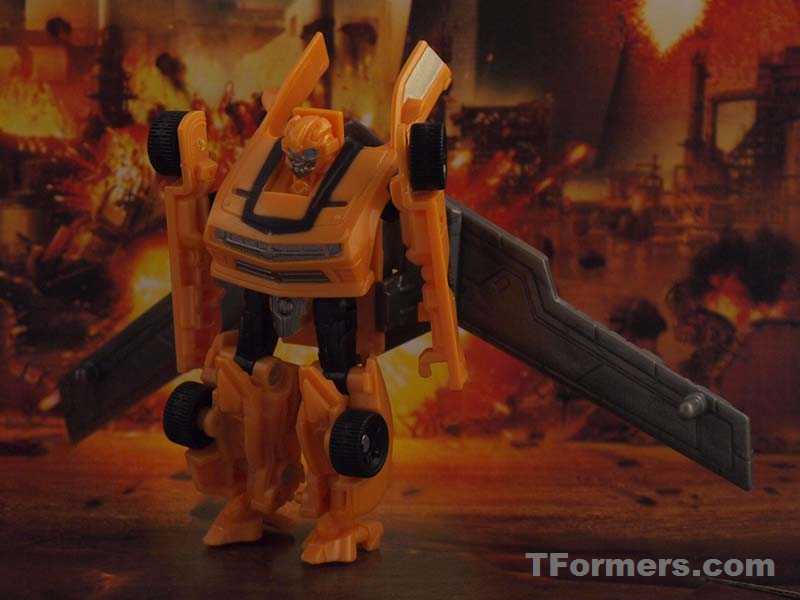 Bumblebee utilizes the same Legends mold that has always has except for one difference. This time, he sports a jetpack. The jetpack clips on to his back and it pretty massive. One wing is about as long as Bumblebee is tall. 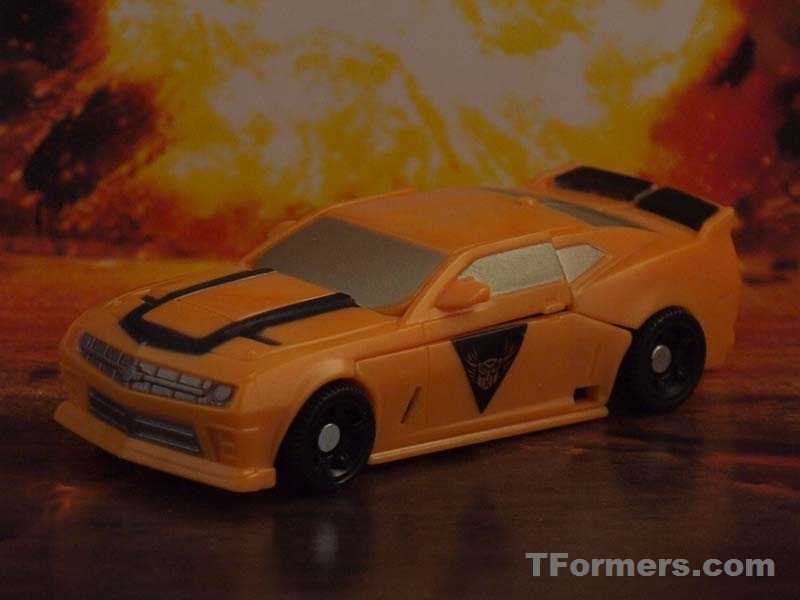 Besides the trademark yellow and black comp stripes, an Autobot insigina in a black triangle is found on the doors. Overall, very detailed for a Legends as you can spy the Chevrolet bowtie on both the grill AND the trunk. 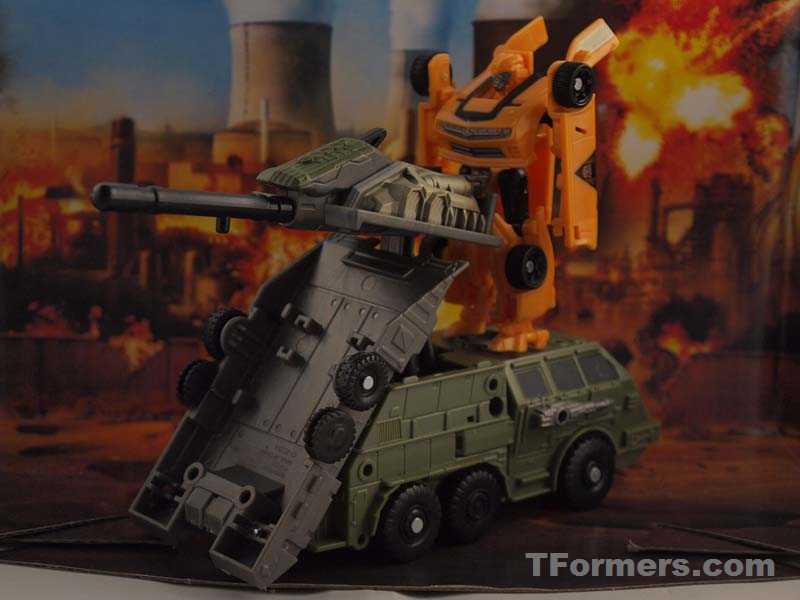 The bunker features a missile launcher that comes loaded with one missile. The launcher not only can rotate 360 degrees, but can also tilt 75 degrees up or down for maximum coverage. Bumblebee can stand on top to use the launcher.

Fold the ramp down, rotate the launcher so the barrel faces front, flip around the ramps and push down. The wings for Bumblebee store under the ramp, as does the missile. 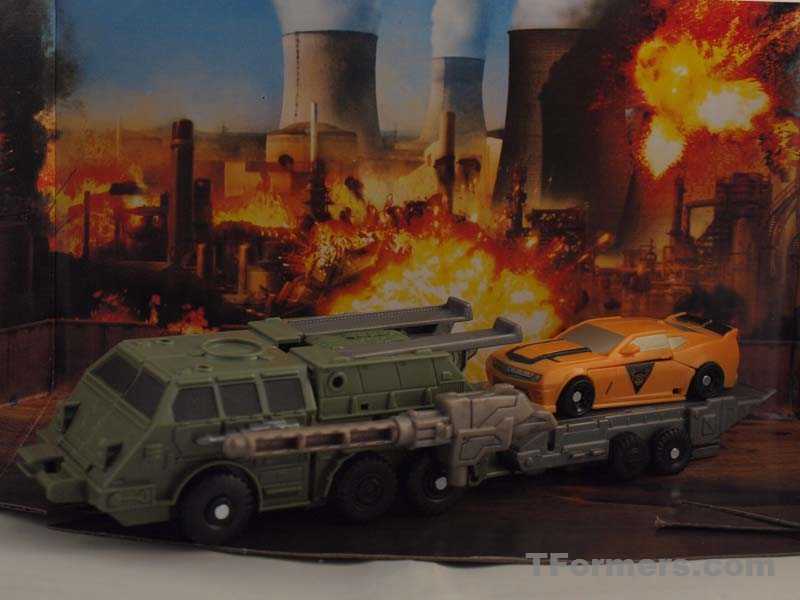 The APC is very versatile, as you can carry not just Bumblebee but another land base vehicle on top. A gun is molded onto each side of the APC. However, you can combine weapons from other sets on the APC as well, such as the launcer from Starscream's carrier.

Transformation (to battle base, mode 1)

After flipping the APC on it's back, twisting the ramp 180 before folding it down and splitting the cab in half, you can lift up 2 towers 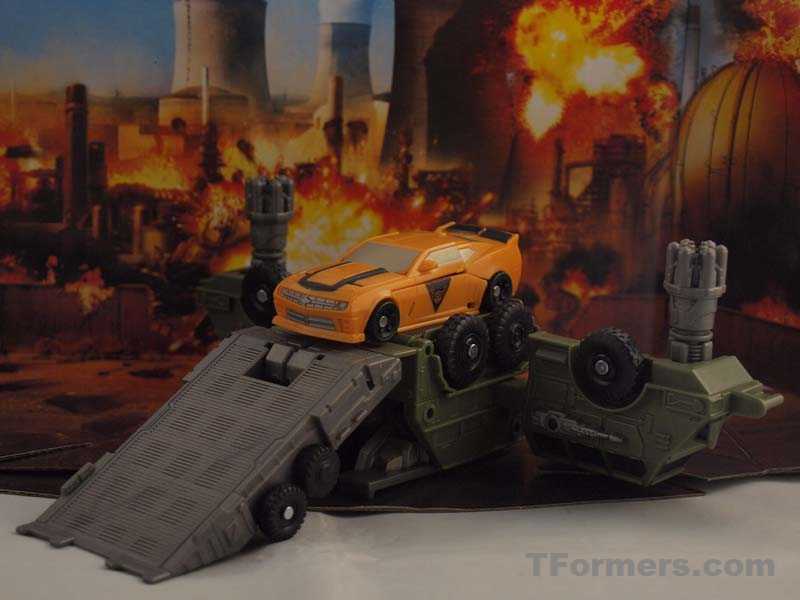 This isn't so much a battle base as it is a launching platform. Placing Bumblebee (in alt mode) on top then lifting on the top platform will "launch" Bumblebee into battle.

Transformation (to battle base, mode 2)

Simply take the top ramp from the APC mode, flip it around to the top of the battle base and flip around the ramps to expose the launcher. 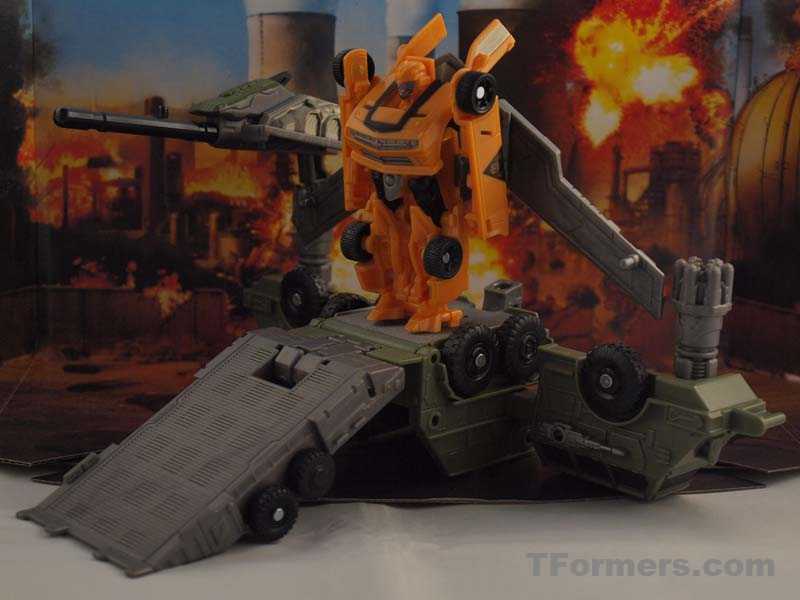 OK, this more resembles a battle base. You have two options with the launcher. You can leave it where it is OR you can disconnect it from it's peg. From there, you can mount it on one of the two towers on the side so that Bumblebee can stand front and center on the platform.

Both Bumblebee and the bunker are pretty well put together. The only concern is with the jetpack. When bolted in storage mode, you lose the ability to smoothly roll the APC around.

This set works a lot better for me than did Starscream's carrier. All three modes are functional and Bumblebee can interact with them accordingly. As a bonus, you have transport for 2 vehicles in APC mode. $15 for this set is still a stretch, but not as big of one.