Crankcase - Dark of the Moon - Figure

In 4wks (or less for some), Dark of the Moon will be hitting theatres all over the globe. Several new characters will make their debut for this movie. One such character is the Decepticon Crankcase, part of the Hunters group. Just how much of a punch does this ugly brute pack into a Deluxe mold?

As an expert tracker and infiltrator, Crankcase serves Megatron from the shadows. Unseen and never recognized, he watches the Autobots and reports their movements back to his master. He rarely engages in combat, but when he does, it is swift, terrible and final. 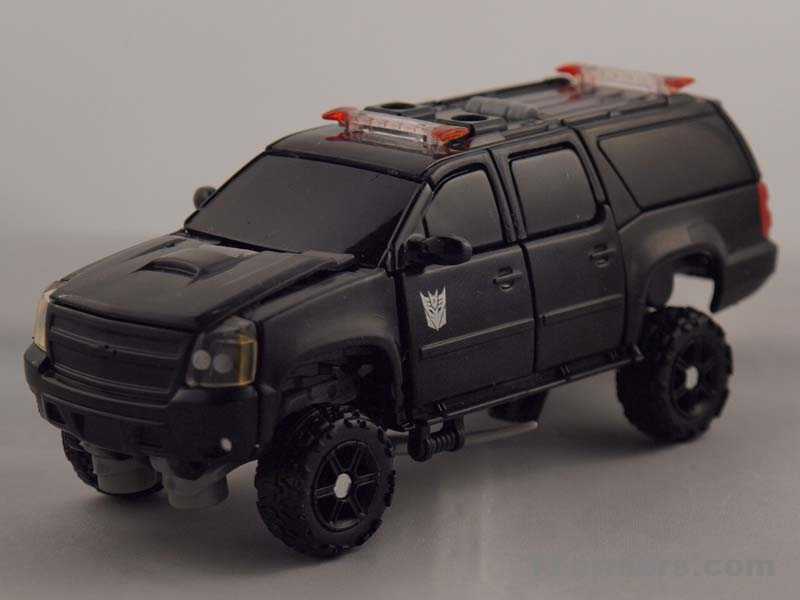 Crankcase utilizes the Chevrolet Suburban SUV for his alt mode. The SUV is all black, including the painted windows. Silver Decepticon insignias can be found on both front doors. Besides the light package and the dual LED light bars on top, only PVC hinges interrupt the all black flow. 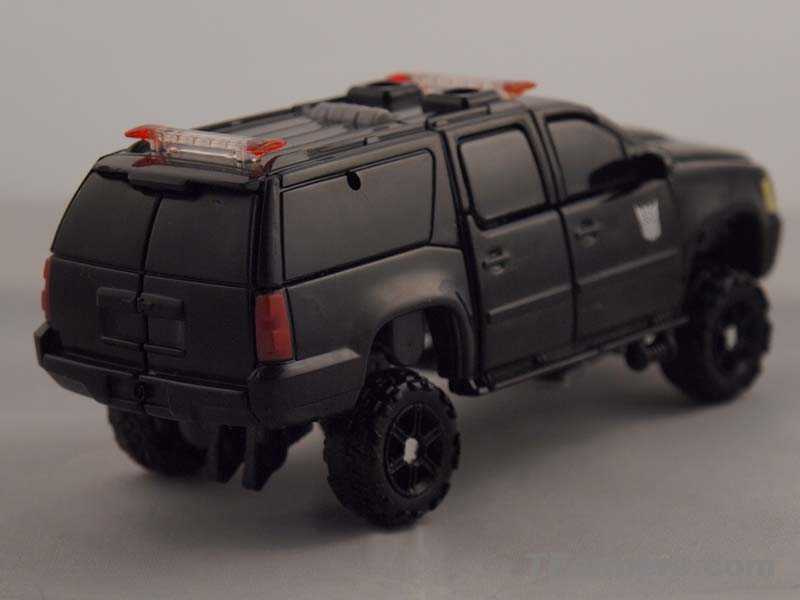 Besides sporting a beefy lift kit, Crankcase also has his MechTech weapon that can mount on either side of the roof. Pushing the top trigger will extend a claw arm, which is extended enough so it could double as a battering ram. He seems a bit smallish for a big SUV, but he's done rather well all the same. If you want a different flair, you can unwrap the pincers from underneath and use them as a front bumper claw.

Alt Mode Summary:He might be small, but he is well executed.

Transforming him to robot mode is surprisingly complex, but not overly difficult. The hood might resist folding 180 degrees back, but gentle force will make it see your way. 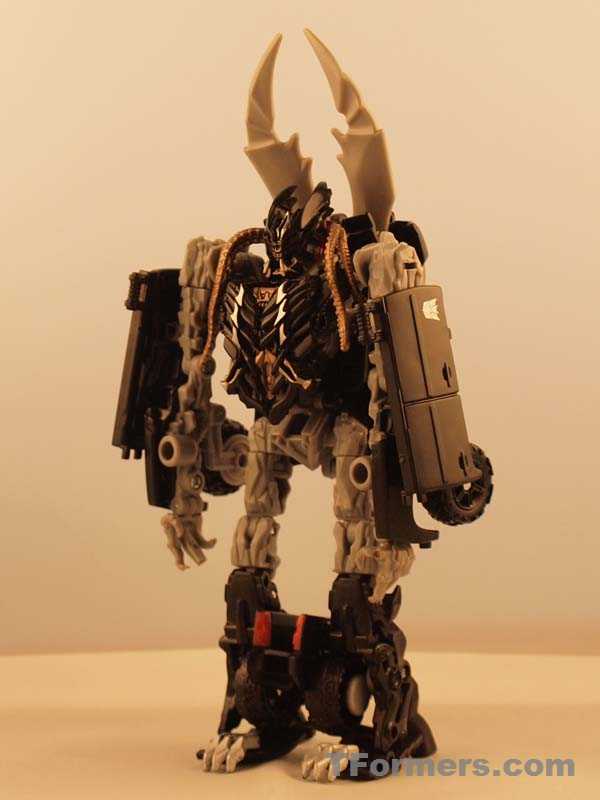 So, a Decepticon, the Predator and a bunny walk into a bar and accidently set off a DNA splice machine. OK, bad joke, but that's the best way to describe Crankcase in robot mode. His limbs are PVC gray and his chest is adorned with gold accents, but he keeps the mostly black paint job. He also sports dreads. Gotta bling your SUV, after all. All four of his buglike eyes are piped red. 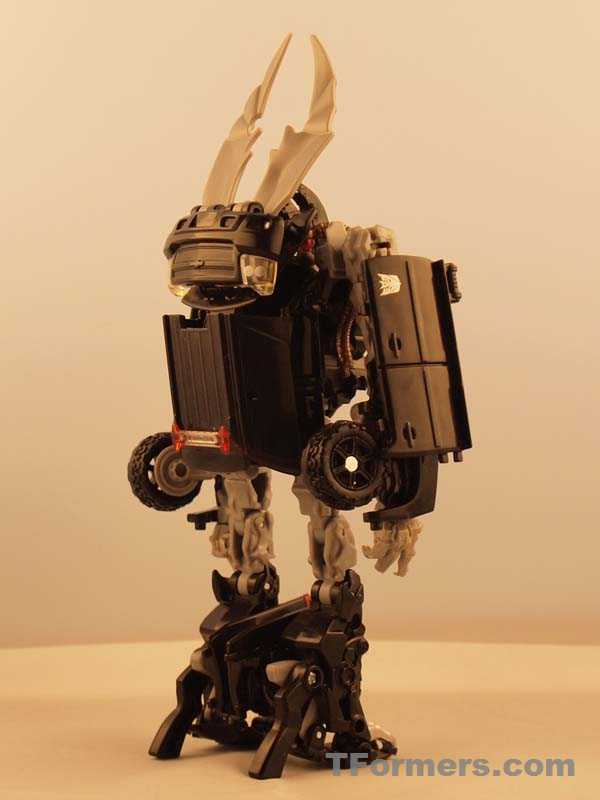 Being that his hands are open, you'll have to mount his weapon on pegs situated on his forearms. Combined with his good range of motion, his robot mode is pretty well thought out... if not ugly as sin. 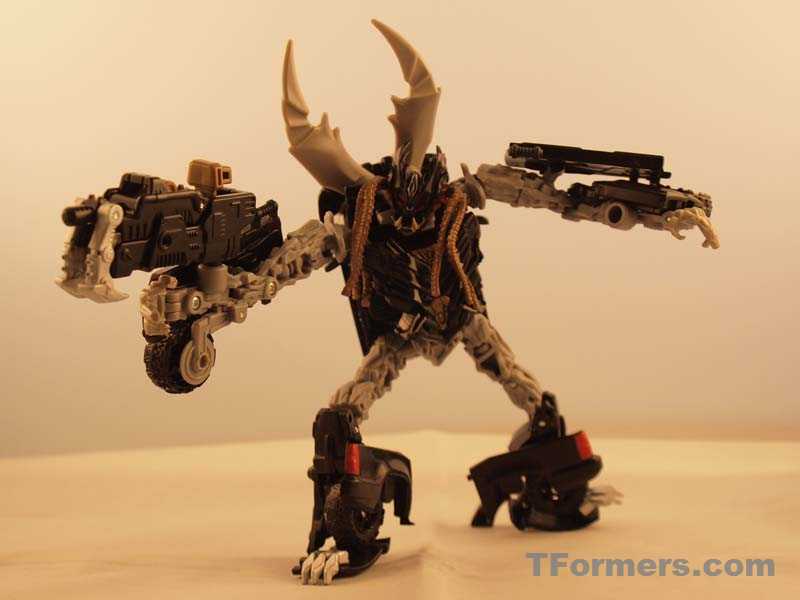 
The arms are jointed exceptionally well for a wide range. Very agile overall.

Robot Mode Summary:Ugly, but gets the job done well.

The hood hinge is the biggest concern. It seems to need coaxing to collapse right and could be the subject of stress over time. Also, the dreads and claws are soft rubber and may deteriorate as years pass.

I'll admit it. I wasn't fond of Crankcase at first. However, the more I interacted with him the more he won me over. He won't win any beauty contests, but he is certainly an impeccable Deluxe mold.