The Human Alliance series was introduced to us during the Revenge of the Fallen lineup. Several figures (at least one that almost no one found) were released and paired robots with humans with interactive gimmicks. With Dark of the Moon now on shelves, it looks like the Voyager class HA figures are making a comeback. While the first 2 released were repaints paired with different humans, we get a look at the first new HA mold: Roadbuster.

Roadbuster is out racing in vehicle mode whenever he gets a break from pulverizing Decepticons. He's found that allowing humans to ride with him - especially professional race car drivers - sharpens his tactical skills and knowledge of Earth's road network. Even Transformers sometimes like to sit back, relax and go along for the ride! 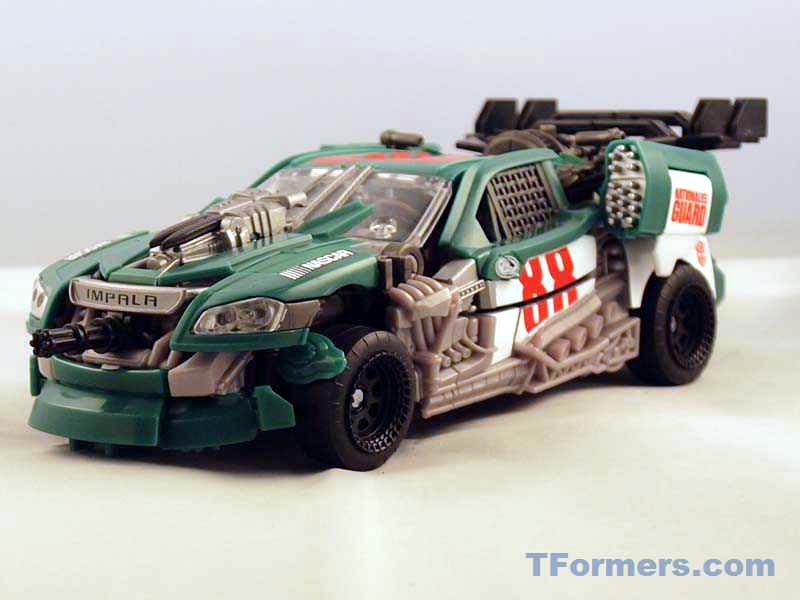 Roadbuster takes it to the next level with his Human Alliance mold by going into brute mode. As well as having an afterburner pop out of the trunk, he also sports a massive battery of missiles on either side of the door. If that's not enough, he also has a gatling gun poking out of his front grille. 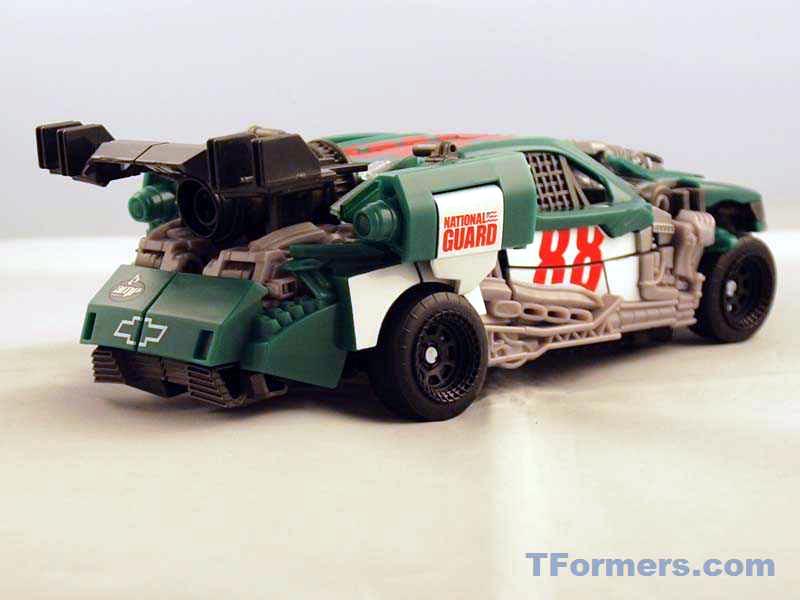 What, you want more? OK, fine. The headlamps can also convert into cannons and be postition directly in front of the windshield. I should also mention that the afterburner comes with a flame missile that can launch out the back of it. Interiorwise, it's standard fare with a steering wheel, a couple of gauges and 2 seats.

Alt Mode Summary: Fast AND loaded with firepower. Don't mess with him on the track. 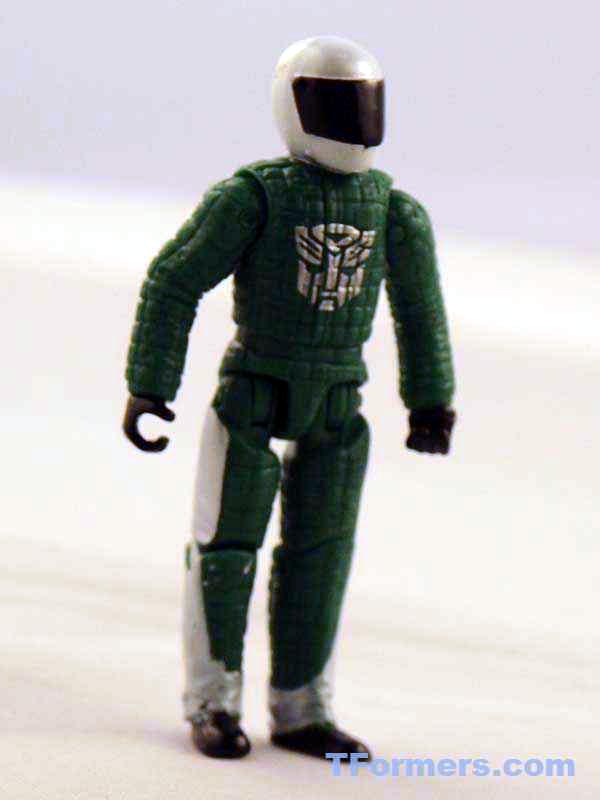 Sergeant Recon is in a green racing suit with the Autobot insignia on his chest. He wears a white helmet with a black visor. Besides that, he's just another average human ally. I wonder who gets to name these guys anyways...

If you go by the instructions, you'll likely pull your hair after awhile. Fortunately, if you take your time and compare to the box art, he becomes easier to convert with every attempt. That being said, he is perhaps one of the hardest Human Alliance figures to transform. 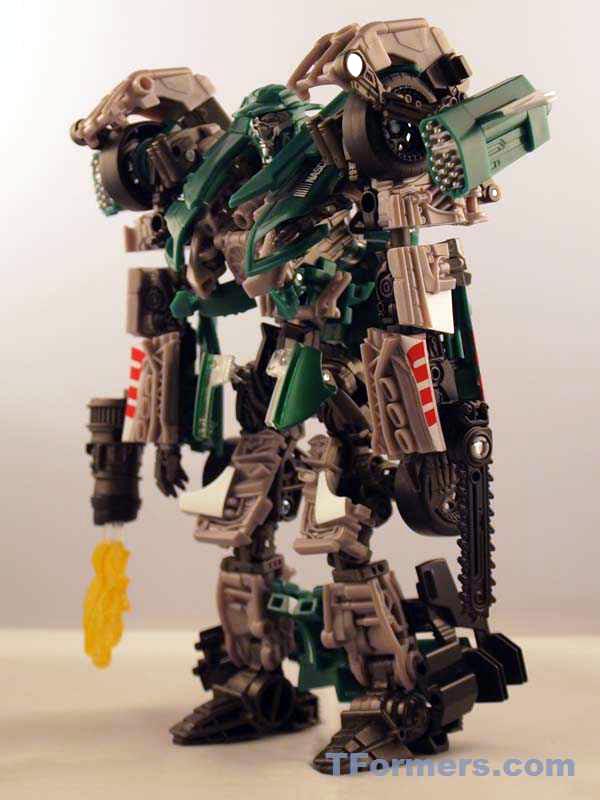 Now this is what Roadbuster should have looked like in his smaller Deluxe form. Although there is still some unpainted PVC bits to deal with, there is more color in this mold. The missile batteries can be positioned as you like, but by default lay alongside the tires on the shoulders. You can choose to expose the guns on his chest or conceal them under the headlamps. While the headsculpt may look a little bland in comparison to other Voyagers, it does hide something. 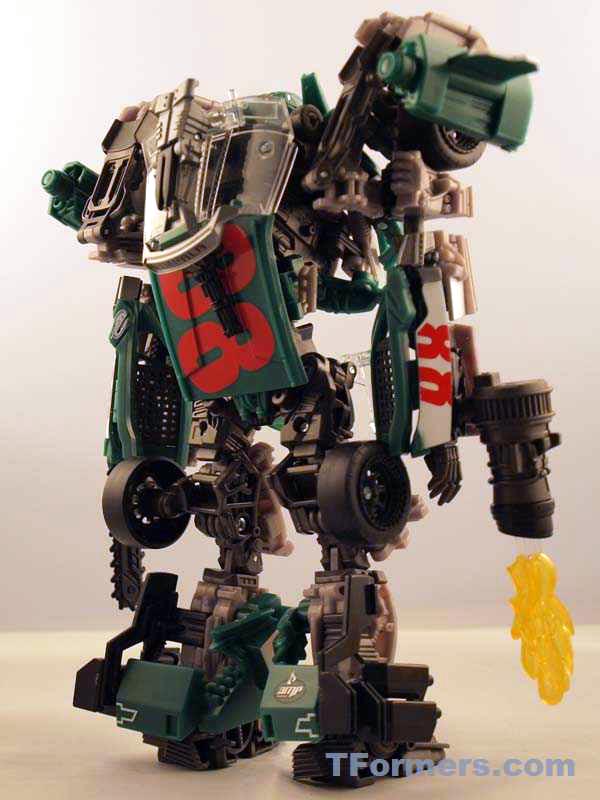 By pressing a lever on the back of his head, you will replace his optics with a visor. At the very least, it makes the head look a bit nicer. Roadbuster dispenses with his MechTech Weapon and insteads goes for the best of both worlds. The afterburner/launcher fits into a peg alongside one wrist, while a chainsaw pegs into the other wrist. 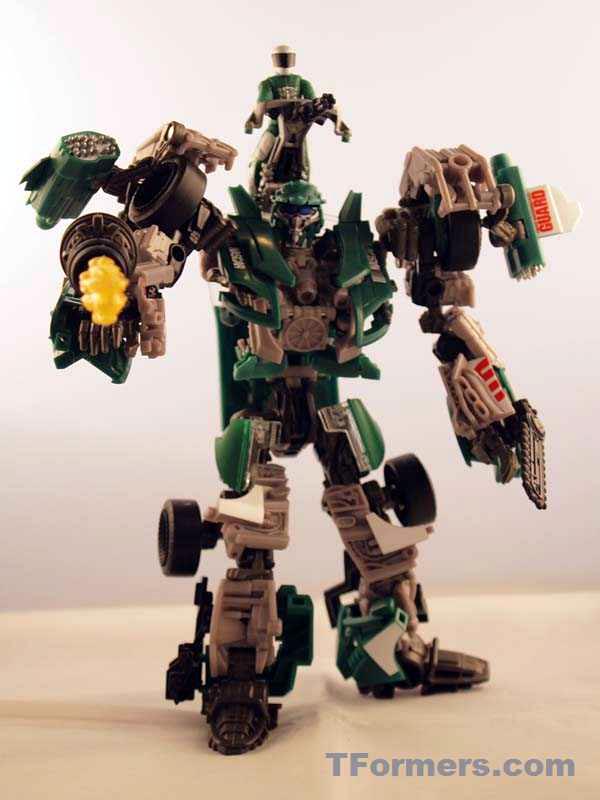 And what would a Human Alliance figure be if the human didn't get in on the action? The gatling gun resting on his back can be positioned above his head. At that point, Sergeant Recon's feet can lock into pegs sticking out of the windshield, allowing the sergeant to ride on Roadbuster's back and use the gatling gun. Strangely, there is no other robot/human functionality in robot mode. While odd for a HA figure, it's also welcome, as the human interaction gimmicks cost the robot some aesthetics. 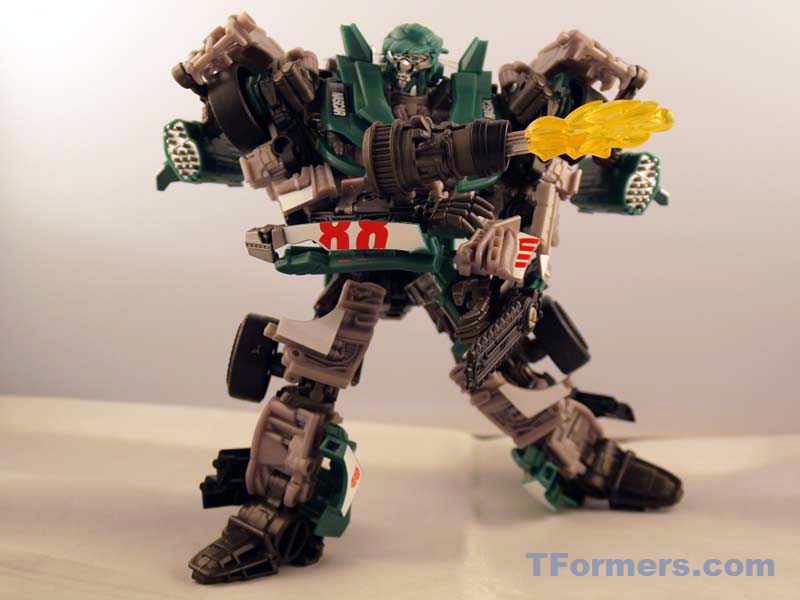 
For a voyager sized figure, range of motion is decent. There isn't enough rearward bite in the footprint, so balancing may pose some problems depending on the desired pose.

Charging an extra $10 to pack a voyager with a 50 cent human seems a bit overboard. On the flip side, they did pack Roadbuster with a lot of gimmicks in both modes. That being said, there are also some durability issues. The knee plates, which also form the rear fenders, pop off without much force. I can also see the fornt fenders breaking free if used too roughly. Finally, the chest pieces lock in place really tight. Use care or stress may eventually become a problem.

While it's unfortunate that we can't get all three modes into one wrecker mold, we can get 2 figures that can represent all three modes. While the Deluxe mode was a bit on the bland side, the HA mode makes up for it with all the gimmicks and extras packed in. I can't necessarily say that $30 is a great price for him, but he is most definitely a step up from the Deluxe mold in more ways than one.