To wrap up our look at the Walmart exclusive Deluxe molds, we go back to the racetrack and check out Sideswipe, who dons a racing paint job. He also packs in a trip down memory lane, thanks to his sponsors.

Sideswipe is a master battle tactician. He developed a method of dispersing large gatherings of Decepticons with his blasters before screeching into the fray with his Cybertanium blades at the ready. His special race-tuned vehicle mode allows him to enter the battle faster than ever before - just the thought of which causes the spark of Decepticons to dim! 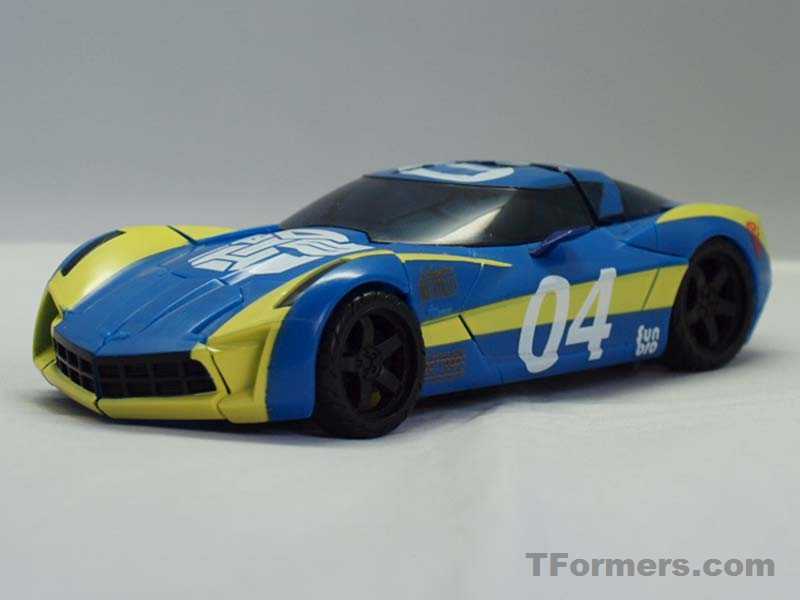 The Sidearm Sideswipe is used for this racing edition, and it's covered with a more traditional (and loud) track car paint job. How does royal blue and fluorescent yellow strike you? There's a huge Autobot symbol on the hood, as well as well as a TransTech Autobot insignia on the rear quarterpanels. For you G1 fans, the 04 is a nod to his Takara issue number, C-04. 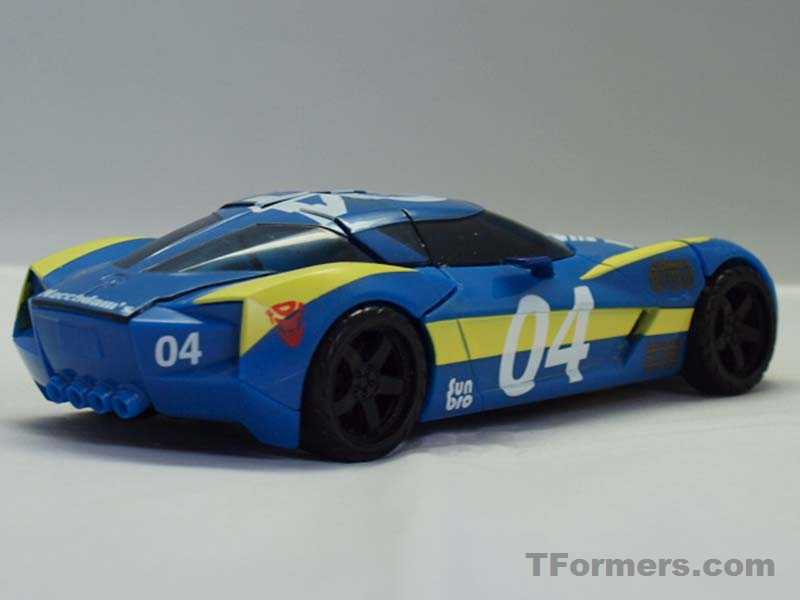 Want more nostalgic goodness? Maccadam's also sponsors this car, as evidenced on the rear decklid. You'll also find Axalon Rattrap's and SunBro. The twin pistols are still tucked away under the rear glass and can be swung out to hang alongside the side. Just be warned that they are a particularly garish shade of blue.

Alt Mode Summary: Good luck missing this one on the oval.

No changes from the Sidearm mold. That includes the stubborn head that has to be coaxed from the roof recess. 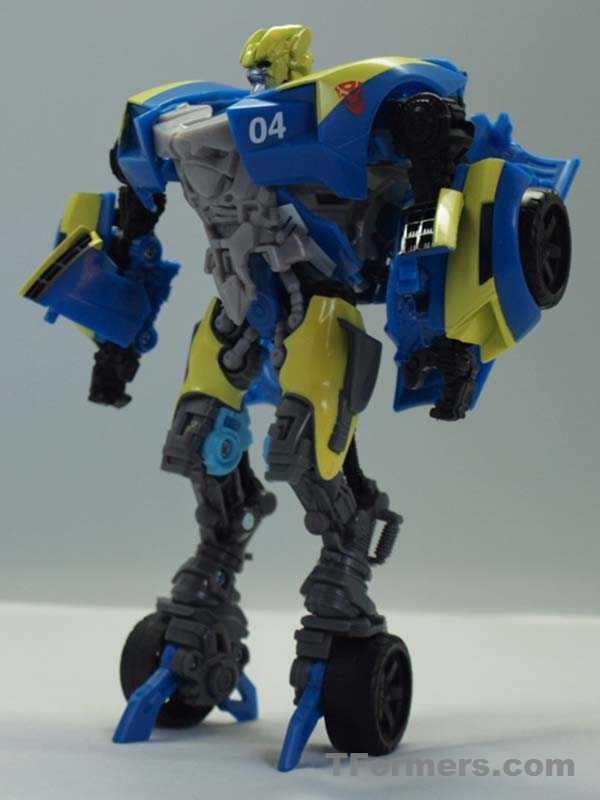 Sideswipe is still pretty loud in robot mode. The thighs are fluorescent yellow as well as the head. The lower legs are a darker PVC plastic, while the chestplate is unpainted. The eyes are piped in blue. 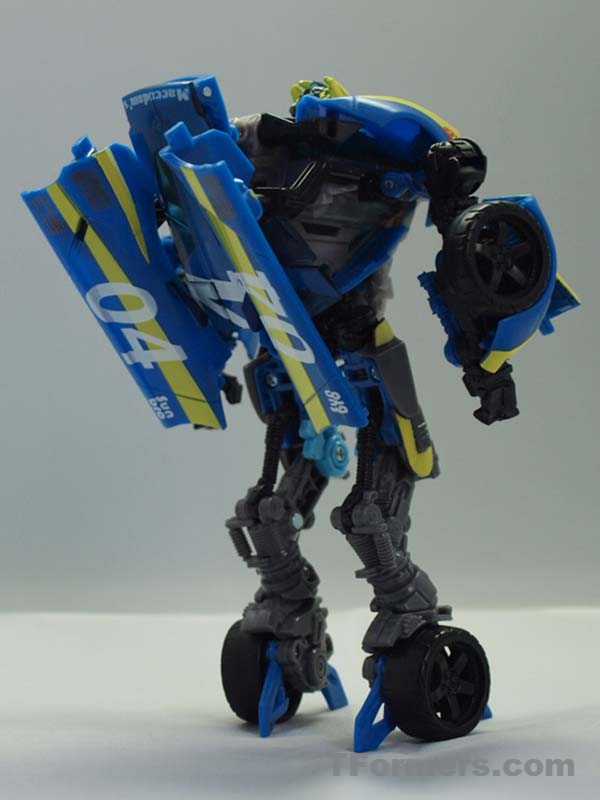 Though nicely balanced, leg movement is still restrictive due to the inherent design. The arms do make up for it, which is good since they wield the pistols. 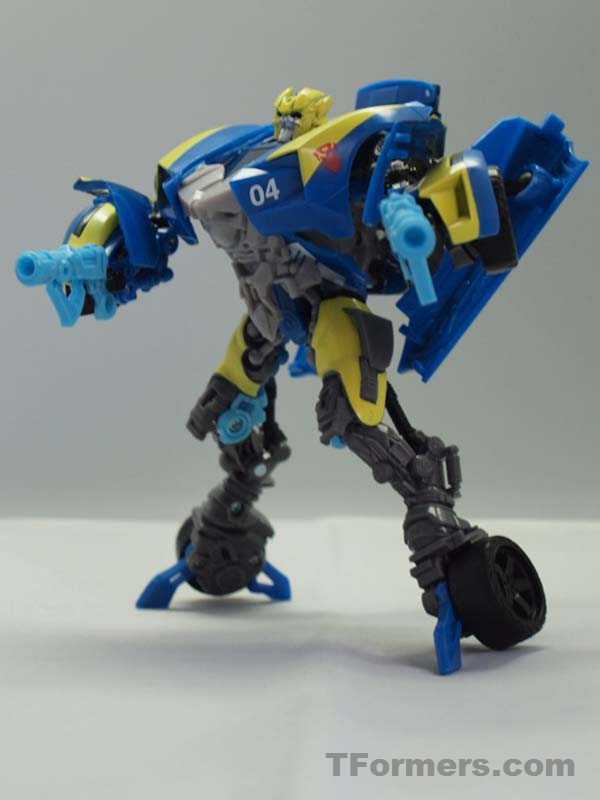 
The legs have very minimal movement still. There is some flex for the legs, but the rubber supporting the upper legs will usually fall back into memory.

Robot Mode Summary:So long as you concentrate on the upper body you'll be fine.

The biggest issue remains the rubber on the hips. Over time, it could degrade and compromise the legs' holding ability. With the head being difficult to get out of it's storage area, paint scratching could also be an issue. Then there's the fact that this is a repaint that only race fans or 90s TF fans will salivate over.

As with the Bumblebee figure, this is purely a decision of nostalgia. If you're a racefan or want (in this case) some Beast Wars/Machines goodness, this figure might speak volume to you. Otherwise, it's a somewhat loud repaint of a baseline mold.