Let me start by saying this is my first review, so please cut me some slack if there's room for improvement!

Anyway, I guess for a lot of people this is a controversial one... there's a school of thought that iGear have sailed too close to the wind (or too close to legal infringement if you prefer) with their Faith Leader and now MP seeker figures. I don't want to get caught up in the rights and wrongs of it, so this is a review of the figure on its own merits... 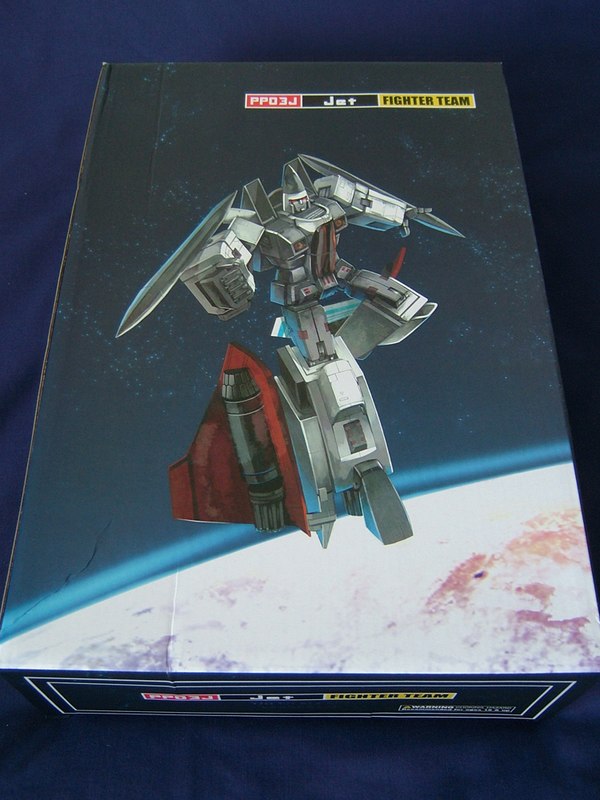 With that said, some complained that Faith Leader felt cheap and lightweight and were perhaps concerned the same would apply to the coneheads. Happily this isn't the case (I believe the reason Faith Leader seemed a bit thin and fragile was due to it being literally a shrunk down MPOP mold, therefore thicknesses and tolerances were shrunk down too). This is basically another MP seeker. MP Ramjet - I'm going to call him that because clearly that's who he's meant to be - is the same size as a regular MP seeker. Comes in same size packaging, with almost identical insert tray... 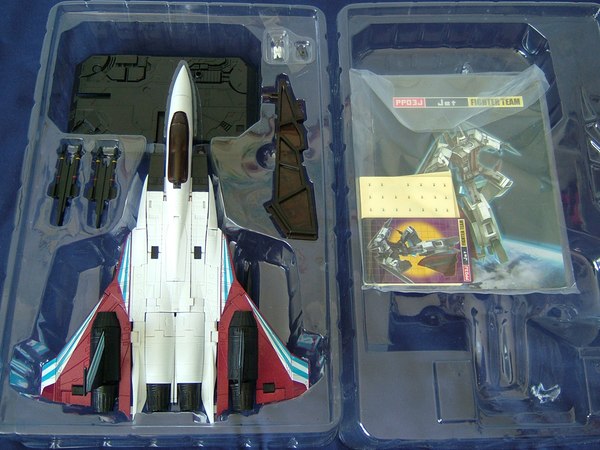 Accessories include the display stand, the mini Dr Archeville familiar from previous MP seekers, as well as the clip to hold the Megatron gun. The jet comes with iGear's new cluster bombs attached (there are two sets of holes for weapons to plug in beneath the wings, one on the engines and one further near the edge of the wing). The set also includes the usual double-missile add ons, but sadly not the null rays (this is a bit of a shame, since like the other seekers Ramjet was depicted in the comic/toon as being armed with null rays). The cluster bombs we get in their place bear little resemblance to the G1 Ramjet toy cluster bombs, and are just elongated cylinders lacking in detail. 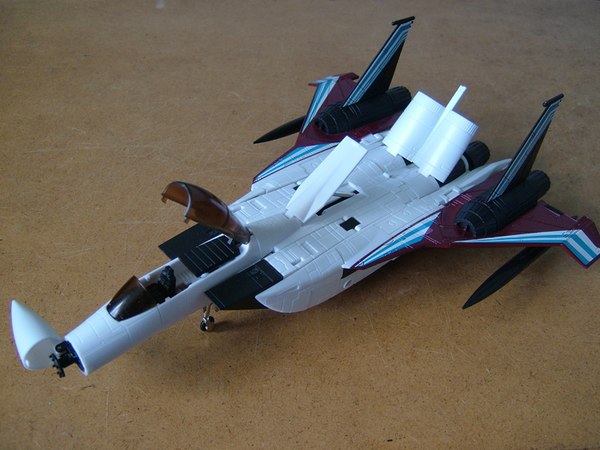 The jet mode itself is a very nice looking model. The G1 coneheads of course were the F-15 jet with imaginative wing variations, which on a realistic MP could easily have looked fake or silly. So it's nice that everything is sleek and in proportion and comes across as a perfectly viable real-world design. The wings are a deep, almost metallic maroon colour, with blue and white detailing harking back to the G1 toy. The body is made of flat white plastic. 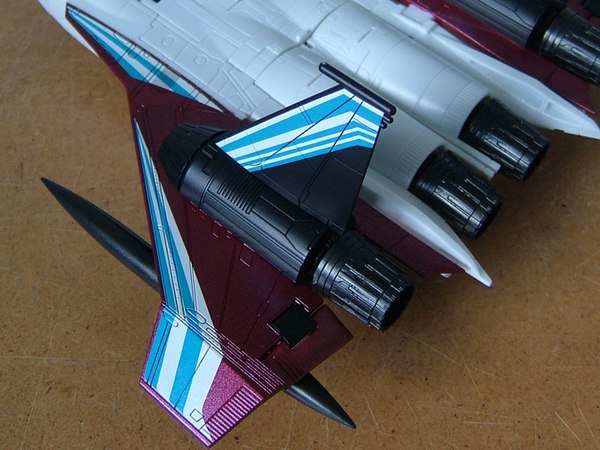 All the features of the regular MP seekers are carried over; radar in nosecone, engine covers, landing gear, even adjustable flaps at the rear of the wings. Transformation to robot mode is hampered slightly by the lack of any instructions whatsoever. A glossy eight page booklet is included in the box, but contains a brief comic strip and a back page ad for PP Ironhide/Ratchet. Still, most people will be familiar with the MP seeker transformation and won't have too many problems. The new wing design necessitates certain differences to what we're used to, most notably the legs now have most of the wing attached (hinged so they will fold behind robot mode if one desires). This is one feature where iGear have improved on the HasTak design, removing hip kibble by keeping the bulk of those pieces on the leg (they even slide up a bit so Ramjet can stand freely). Another nice addition is a pair of wrist communicators in the style of MP Prime. The head is entirely new, with a faux-cone (oddly has a black nosecone, which the alt mode does not!). 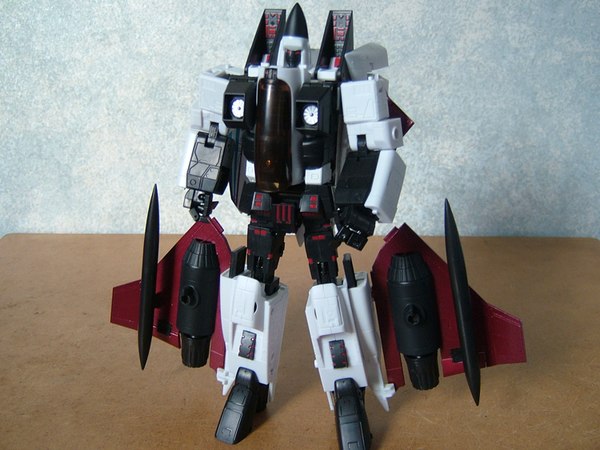 Quality feels surprisingly good on this figure, maybe not Takara standards but certainly on a par with Hasbro. Joints are tight and there are lots of paint apps. Overall it handles like the real thing and I can't see how an official MP conehead could do a better job. Perhaps the only thing I would have changed is to give him bigger knees to more resemble the animation model and differentiate the coneheads from the standard MP seekers. As it is, the only thing you can do really is keep the shoulder air vents angled back, which helps distinguish him as a conehead. 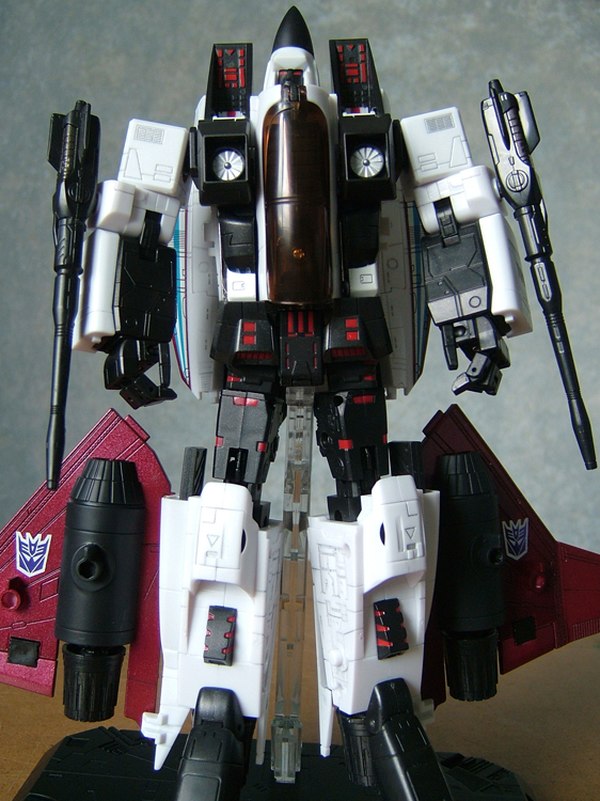 I have changed my mind about these iGear coneheads several times. When they were first announced I was excited that someone was going to complete the Mp seeker characters. Then with the price and the fact that I already own multiple versions of the mold I started to have second thoughts. I decided to bite the bullet and pre-ordered them in case I missed out. As release dates were delayed and postponed I regretted forking out so much for three unofficial 'knock offs'... Well, with one down and two still to come, I'm glad to say I'm excited again. Can't wait for Thrust and Dirge!