It happens every time, doesn't it? Right as the last (and usually most desirable) wave of figures hit prior to a new series starting up, pickings are extremely slim. One of these scarce figures is the re-introduction of Warpath, a G1 original who has been absent from shelves for far too long.

Wherever the fight is, that's where Warpath wants to be. His super heavy armor and powerful weapons mean he doesn't have to worry about things like orders or tactics. he just heads straight for wherever the fight is heaviest, pouring fire into the enemy, and hoping there's someone left standing to give him a good fight when he gets there. 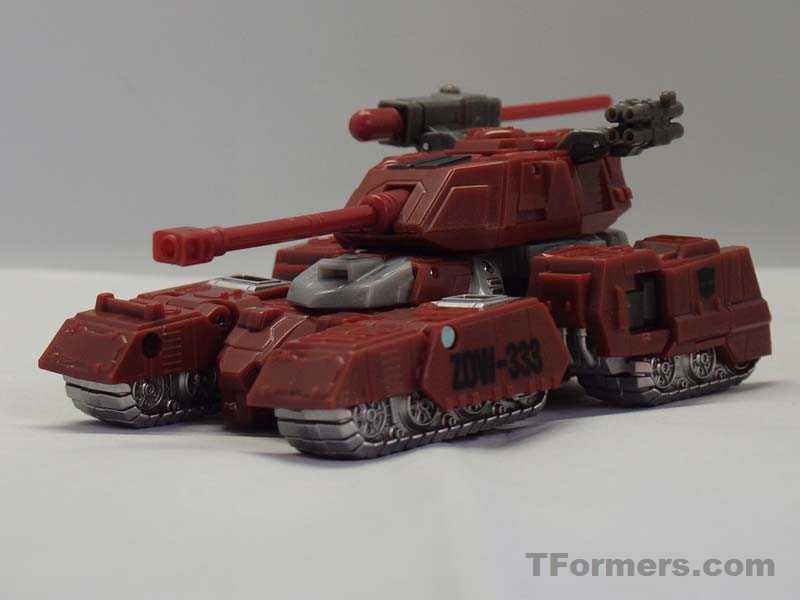 Warpath is an H style ground tank. The color scheme is his familiar rust red. You will also find silver and unpainted PVC in various spots. The left front tread section has "ZOW-333" (Zowie) scripted on it, while the right front tread sections has "K4-90W" (Kapow) in writing. This is in reference to his G1 vocabulary, of course. Both sides of his rear tread sections have an Autobot insignia embossed on them. 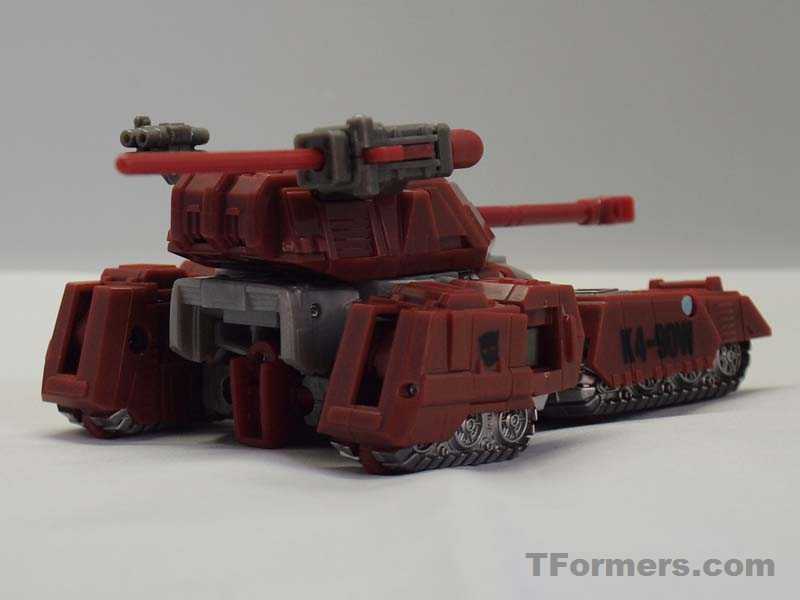 As if the turret barrel wasn't enough, Warpart also has a launchable missile on the right side of the turret as well as a 4-missile battery on the left. These are permanently pinned to the turret. The good news is that not only does the turret spin a full 360 degrees, the main barrel can also tilt 45 degrees upwards. 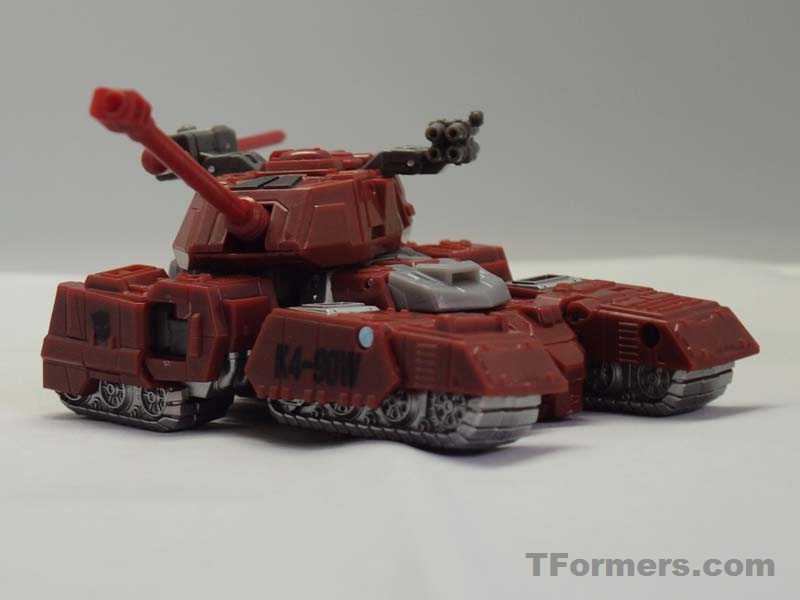 Alt Mode Summary: The first tank in a long time I'm excited about.

Warpath's transformation is alot like his original G1 minibot, albeit more sophisticated. One neat feature is that as you push in the main barrel, his head will pop up. 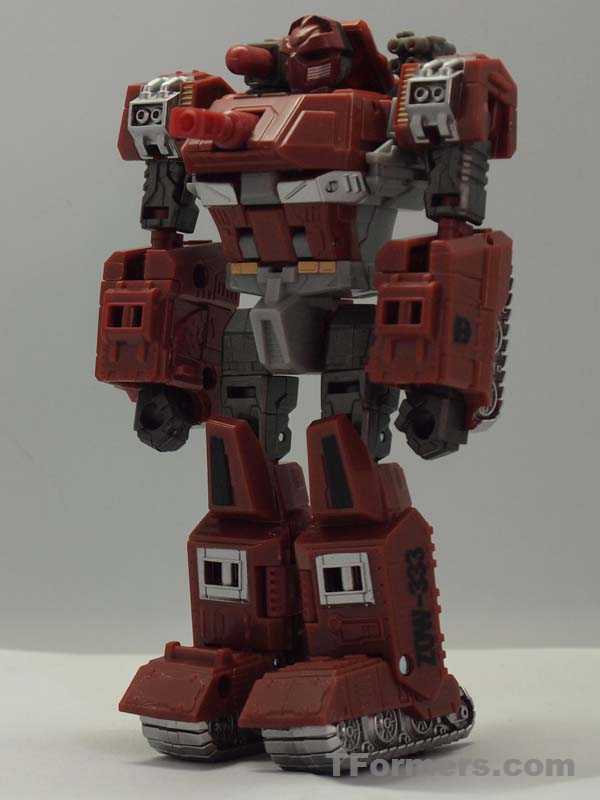 Warpath's robot mode is nothing short of brilliant. His G1 look is preserved flawlessly, if you don't count the two new shoulder mounted weapons. While the head scuplt is nice, it offers no piping. A pity, since the eyes look jeweled and very dark. 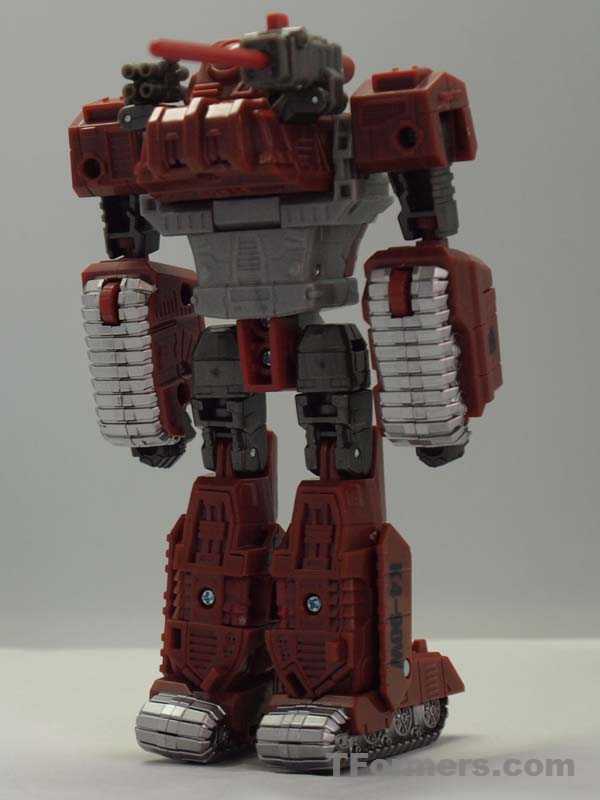 The launchable missile now sits on his right shoulder and can be fired at will. Though Warpath has no hand weapon, both fists are ported to accept anyone's weapon. Like he needs one. 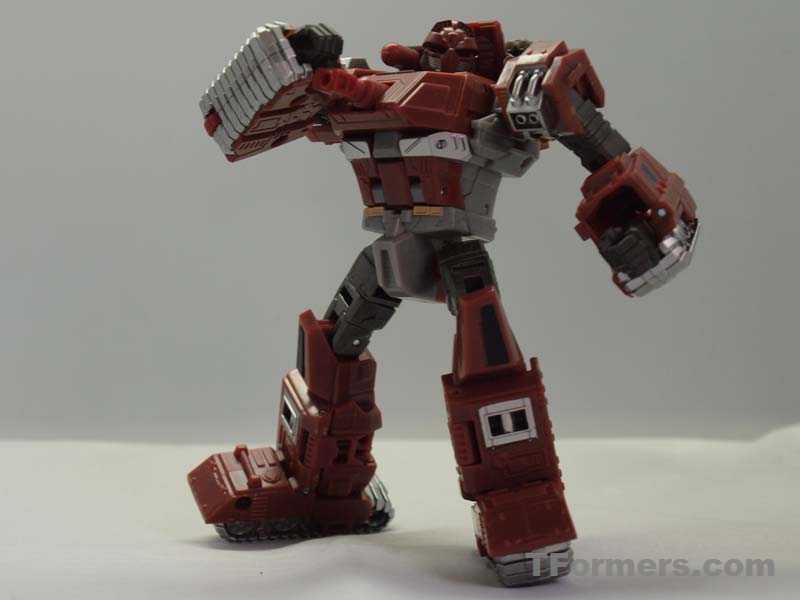 
The only thing missing here is waist articulation. But there's enough flexibility with the rest of the joints to work around it.

The only real concern for this figure is with the painted treads. Run him around some rough surfaces in alt mode enough and you'll wear that paint right off.

Of the three figures this wave brought forth, Warpath is a definite hit. He shows just how far Hasbro and Takara have come with engineering Deluxe class figures. If it means scouring surplus discount chain stores, do it. To not get this figure would truly be missing something.