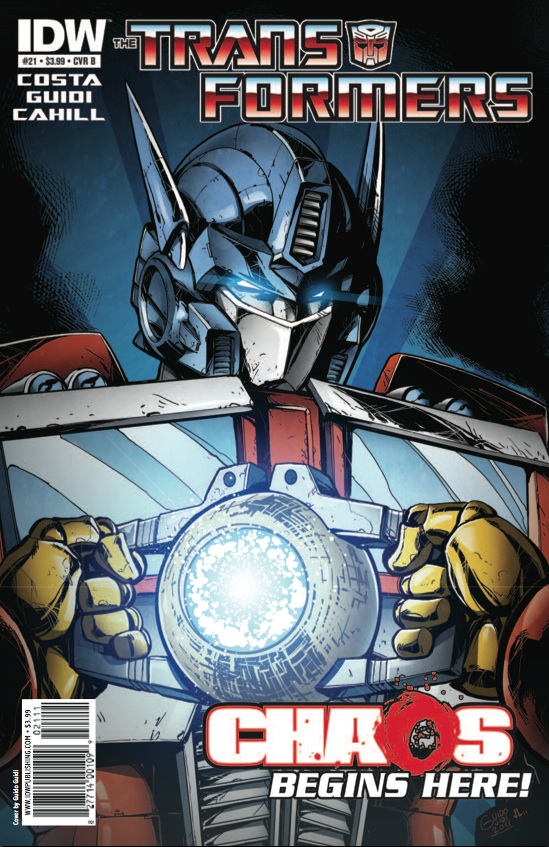 Who's got the touch? Me or you Optimus? OH that's right it brought ME back to life… winning.

Chaos is HERE!! It's finally here! This is the comic that sets up the story that will take us through the end of the year… It's in the comic shops tomorrow and you will want to pick yourself up a copy of it because if you don't well, you'll be missing out on a cracking good comic!

This issue is divided in two. That might spell unsure waters for some, but for me… it was a great issue here's why: The first section was devoted to the Autobots that LEAVE… yes that's right… LEAVE EARTH. Hot Rod, Ironhide, Sunstreaker, Garnak, and BOB arrive surprising all! Hot Rod gives Prime back the matrix and informs him of what he saw on Cybertron. Prime comes out of Omega Supreme, halts the celebrating of the returned Bots, explains the situation and that he means to return to Cybertron, their home, to defend it. Who wants to come? And a unanimous raise of hands ensues. He then has an important talk with Bumblebee about how he's still in charge and there is an important something that is left for him to do, which involves Prowl. (Only the hook is we don't get what that IS! ARGH!! But brilliantly played!)

Even Smokescreen agrees, if you don't get this comic you'll be sorry.

Then the second half of the comic… this is the clincher! Told from Prowl's point of view, he has a private conversation with the captured Megatron. They are playing each other. Prowl wants answers and Megatron isn't willing to give them. But through their manipulation of each other, that conversation is had. (And again, another teaser because we don't get to hear their conversation. But apparently he SPILLS everything.) At which point Optimus Prime informs Bumblebee of the issues. The last few pages of the comic is filled with a quick conversation that happens between Prowl and Thundercracker. He leaves, Prowl isn't very happy with that, but what can he do? Watch him? And before Prowl returns to his investigation he gets a request from the onlooking Spike, who wants to be involved.

Oh, you are definitely involved.

Optimus tells Bumblebee what the Autobots really think of him. (Titled: Revenge of the Bumblebee mini)

Yes! Bots show up inform Prime of what is going down, he decides to get back in the action after a year, they leave. PROWL! Need I say more? The characters are acting like the characters we've been grumbling about for the last year. Everything feels like it's been fixed in one issue. And I'm suddenly extremely happy about this. It almost seems in a way like not much really happens. We don't get those conversations which reveal the stuff that is about to be hitting the fan. But the tease, and the lingering questions! And I suddenly feel like this is just the tip of the iceberg.

Well, WHO do you think he needs FIVE minutes with? PROWL!! The manipulator is BACK!

Remember All Hail Megatron… the issues where there were two different styles of artists on one issue. And the mixed review that it got. This is kinda like that. Only it does it the way I'd say that makes it right. This is one comic but it has two parts. The beginnings of two different styles and it clearly NEEDS that break between the two and it was well played. I'm happy to see both Guido Guidi and Brendan Cahill's work in one comic, all colored by the wonderful Joana Lafuente. It delivers a beautiful comic I was overjoyed to read. And the writing although still has a few little things to niggle at was well done for me. I even liked the biblical vibe on the pages which gave us that exposition. (Especailly since Costa has revealed that the four Chaos issues following the Autobots return to Cybertron will be titled with books from the Bible.) Costa has finally hit his stride and I'm loving every issue we've gotten from him since 18! (Even though we didn't have that epic fight I whined about. Don't get me wrong, Costa has found his mojo. And his Kung Fu is STRONG!)

Can I say, this will be an important plot point later… you are only leaving because Prowl wills it. That's right, it just appears he can't do a thing...

If the last few comics are any indication of how Chaos is going to be… I'd say we are set for a wonderful ride for the rest of 2011!! And if you aren't buying these issues you will have to be avoiding the internet for weeks… nay MONTHS at a time to keep from having the buzz spoil your reading experience prematurely. (And I admit with pride that I've got my subscription in for this.) I can only recommend what I'm willing to do myself and that is the answer I will give you on that topic.

Ongoing has finally become the discovered diamond in the rough. It's gonna be epic and it's gonna make everyone wish they'd been reading it since the beginning of 2011. What are you reading this review for… get on the phone, go to the comic shop… now!