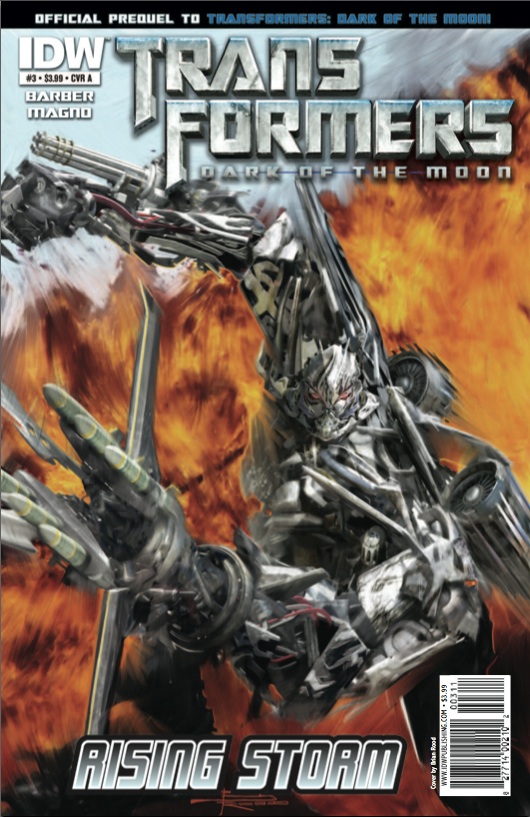 Starscream showing his more photographic side.

Another slice of the pie greets us in the next installment of Transformers 3 Dark of the Moon, Rising Storm issue #3. As John Barber continues the tale that leads us straight into the movie in two months. Drawn by Carlos Magno, colored by Jesus Aburtov and graphics house Graphikslava, another successful issue to add to the two that have come before it. This one leaves no doubt that Shockwave rules.

Galloway admitting that he just can't tell one motorcycle from the next.

With Optimus Prime and his Autobot warriors on their way to Philadelphia to rescue an underfire Sam and defector Brains, Jolt and Dune Runner are left to protect the Diego Garcia base. Or mostly babysit the Autobot refugees and the few humans left behind. The three cycle sisters, Elita-One, Chromia, and Arcee are dropped from the Autobot transport over upstate New York on an infiltration mission to bomb the weapons storage supposedly created by Starscream. While the rest of them high tail it to Philly to help Mirage, Wheeljack, and Bumblebee fend off the horde, we are introduced to Carly who saves Sam's life. The sister's soon discover that the location they were meant to bomb, is not the weapons stash they were hoping for, but a trap. As Soundwave brings down the pain, Elita-One jets off to warn the Autobots. Arriving just in the nick of time to keep Starscream from killing Sam and company, little do they know that the fight they flew off to was just to occupy their attention while Shockwave hits the home front they left behind with full deadly force!

Carly likes big guns and she can not lie. Also proving that Sam continues to be saved by girlfriends.

This issue is intense as Barber keeps Magno working his action magic on the story line. Barber has built on what has been established by previous story and what he's developed himself. This along with the Foundation track is a better prequel build to a movie than we've ever had in the past. He's given us a past, present, and now future of characters we didn't expect to have again. He's made me care about Galloway, who I hated in the film. He's made me love the sisters, which I also didn't have much regard for either. He gives the illusion that he knows what's coming and has set it up in a way that makes me excited for this years movie and that's a wonderful thing. If anymore movies come after Transformers 3, this is the man to hire for the prequels because he knows how to tell stories, make me care about the characters, and give just enough of a meal in story to build toward an overall excitement to what is to come. I'll be watching this storyline very carefully.

Quit your whining Starscream, Shockwave has better things to do than play customer service representative to you!

As for Magno, again the characters are handled better than I've ever seen them in past work. The coloring really makes his designs sing and plays to Magno's strengths. It's a great testament to how important it is to have the right team working with the right strengths to make the whole marriage of the process work for the end product. If I ever had a doubt about him in the past, this work alone has put that all to rest. The man is awesome and "I betta recognize." I like the detail of the robots and the care he takes in making them work on the page.

The end of this comic hits on that sweet spot that makes you want the last issue. While I sit have a few little concerns… they are small in comparison to the emotional payoff I got in this issue. I want to see what happens to the sisters, what is waiting in the cage in upstate New York and how will that play in the end, I'm happy to see a small intro to Carly, and last but certainly not least how the conflict in Philadelphia ends. Bring on issue 4!