After seeing Dark of the Moon, some people are likely crying "FOUL!" that Soundwave was a $200,000 Mercedes-Benz SLS AMG sports car. The master of Decepticon espionage masquerading as a flashy supercar? Can't be. If you need some throwback via a modern interpretation, BTS has released their BTS-04 Sonicron figure that gives us a look on what Soundwave might have resembled had he followed in his G1 footsteps.


Other than speed (which was boosted by one), Sonicron's tech specs are idential to G1 Soundwave's. 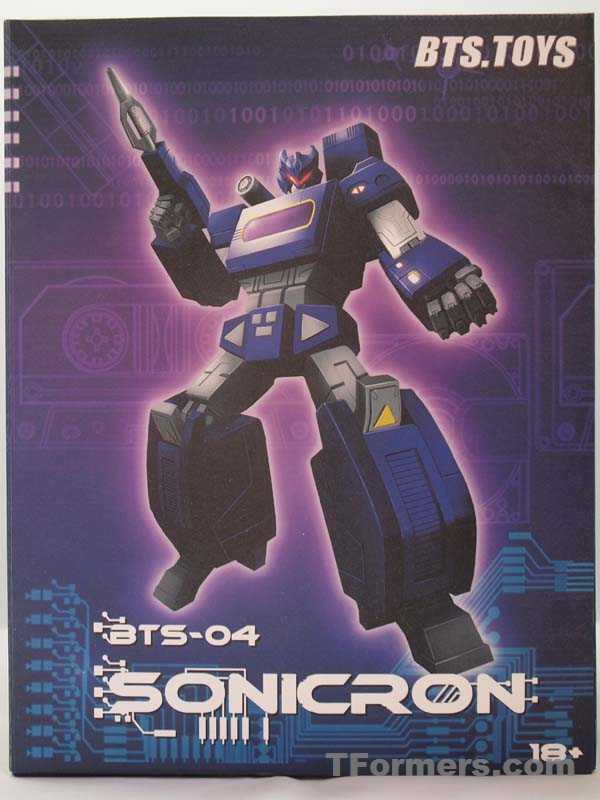 The front of the box depicts Sonicron in robot mode with the title of the figure. It also lets you know this is an adult collector's item by the 18+ on the lower corner. If you lift on the front of the box, 2 magnetic catches will give way to a window showing off Sonicron with all his accessories. You'll also find his tech specs on the inner cover. It's a rather nice touch if you plan to leave him MISB. 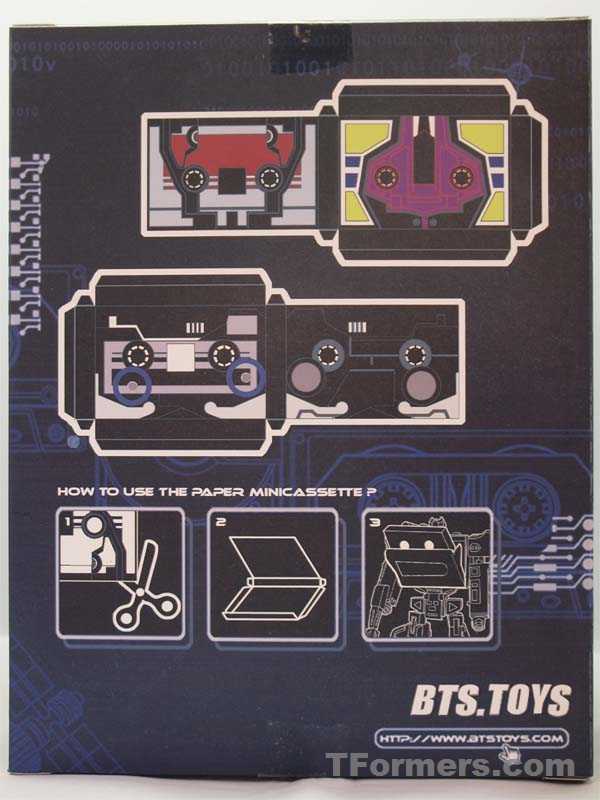 The left side of the box depicts 2 other BTS offerings, the Classics Prime trailer w/Roller (BTS-01) and the Matrix of Leadership (BTS-03). The back of the box offers 2 cut-outs for his mini-cassettes. The tapes look familiar (a la Ravage and Laserbeak) but it's unfortunate that you have to cut the box apart to have paper versions of his drones. 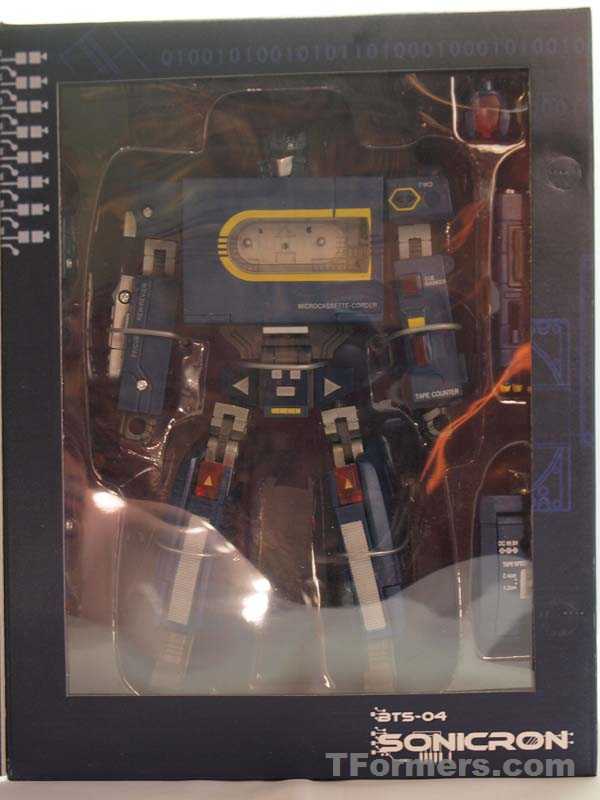 As for the figure itself, he is secured by twist ties. Once you remove the clamshell, you'll also find his instruction sheet and a trading card that has the front cover from the box and tech specs. For a limited run figure, it's actually pretty classy packaging. If they do a second run, perhaps having the mini-cassettes on a separate piece of stock board would be the only suggestion. 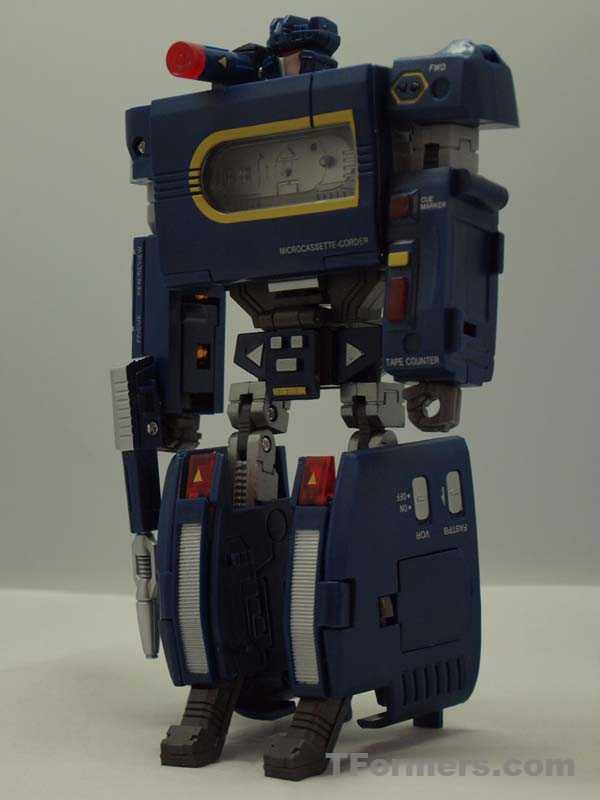 All the details to have Sonicron resemble Soundwave appear to be right on the mark. Even the head sculpt that comes pre-mounted on the figure is very accurate. However, if you'd rather lessen the resemblance, there is an alternate head packaged in with the figure. It's a more contoured head, with rounded visors and less pronounced audio receptors. However, I wouldn't suggest changing heads on a regular basis. There is a bit of slop to the ball joint with the alternate head and wear could become an issue. 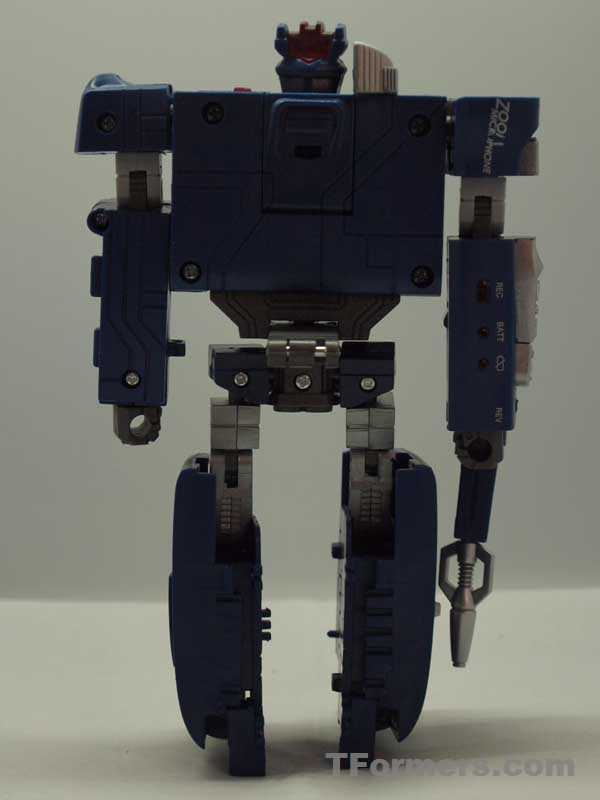 A very strong spring opens the mini cassette chamber upon pressing the red button on his left shoulder. One mini-cassette can fit within. Since I do not own any G1 figures, I can't attest as to whether a G1 cassette-bot will fit. Weapons include the familiar concussion blaster rifle and the Gatling missile launcher on his right shoulder. The multi-warhead missile launcher can peg into his left arm. He also has a Super mode. Some might be put off by the skinny yet deep legs, the folded waist joint that juts from the back and the angular chest area. They're legitimate gripes, but overall the look is pretty on par. 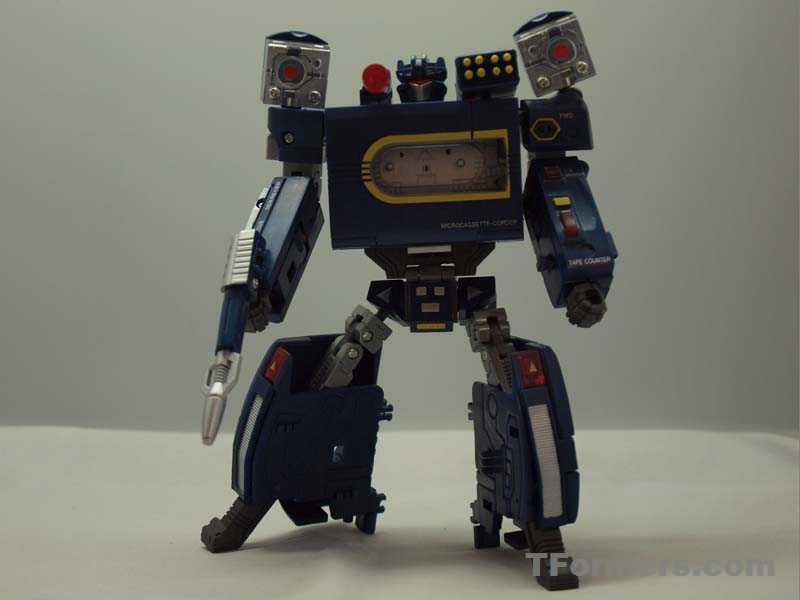 Two speakers unfold from his lower legs and attach to each shoulder. A multi-warhead missile launcher can also be attached to the left shoulder. If you wish, you can also leave the speakers on his lower legs. It all depends on your preference. Either way, just know that the hinges are loose. 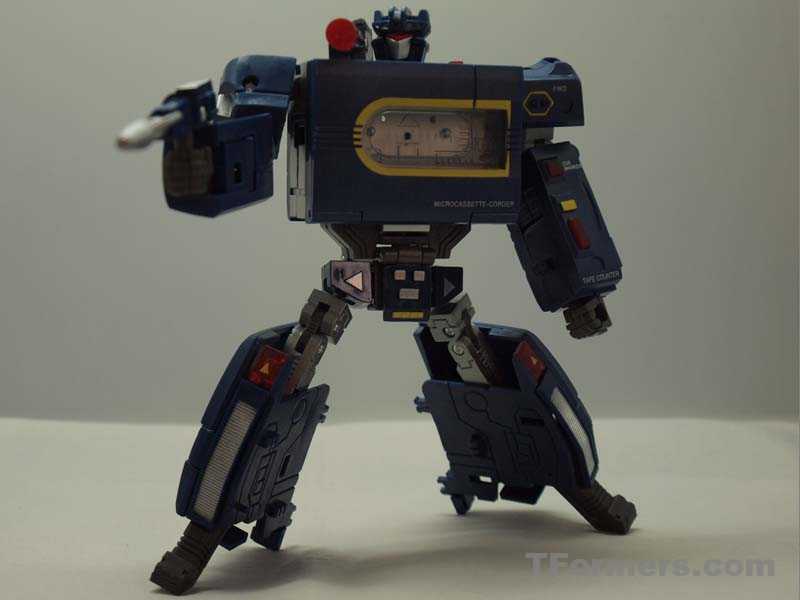 Robot Mode Summary:A little tightening up and he's not too shabby.

Pull back both shins and retract the feet into the shins. Replace the shin plate. Flip up the groin plate and swing the waist 90 degrees to the right. Push each hip back while turning the legs so that both insides of the legs can connect to each other. Fold back each knee so that the knees are flush with the shins. Connect the legs together and push up on the waist.

Open the trap door on the inside of each forearm and flip the fists inside. Close the doors. Push both upper arms into the forearms. Open the trap door on his back to flip the head inside. Close that door. Rotate the right arms 180 degrees, then fold the arm onto the shoulders to form the top of the alt mode. Carefully push up on the left arm so it slides into place. Flip the legs around until they connect to the right arm assembly. Retract the handles for both weapons. Slide each weapon into one half of the abscess on the lower legs. Connect the power supply panel to the left arm. 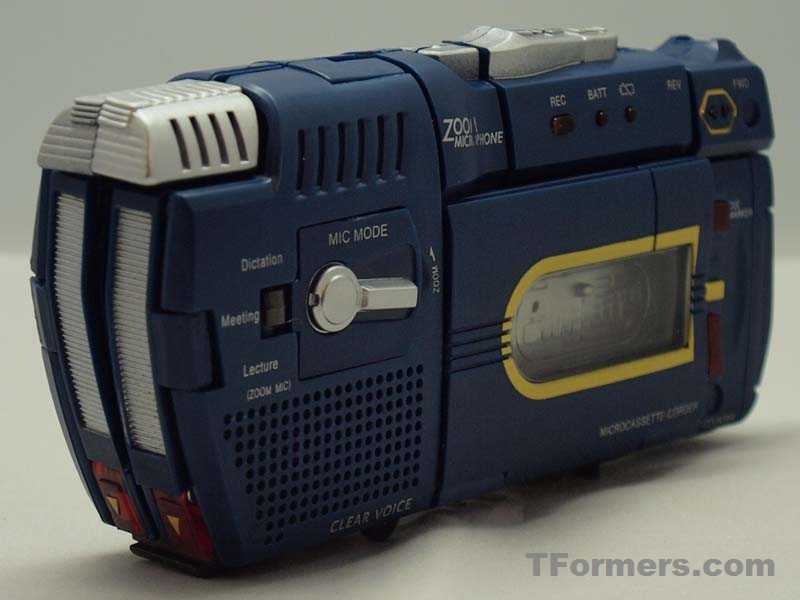 Sonicron's alt mode is a professional grade analog mini cassette-corder. OK, so he's still a cassette player. However, he's not just garden variety either. BTS went out of their way to make this recorder look realistic. The weapon pods resemble a condenser microphone. Although static, there is also a mic mode selector on the left side. There are plenty of translucent indicators that show everything from battery life to tape direction. More switches can be found on the back. 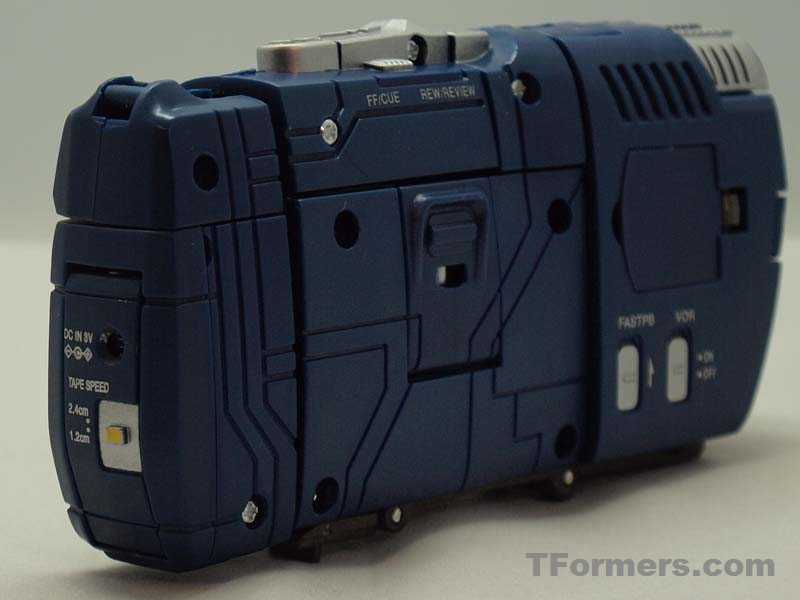 Although the playback buttons look static on the top, pressing on the Stop/Eject button will eject the cassette drawer. Form-wise, it's a very realistic set up. However, fit and finish is a bit sub par. The rear of the device is uneven and doesn't stay pegged in very well. There's also uncleaned plastic in a few places, albeit minor in size. And just in case you want more from Sonicron, he can deliver 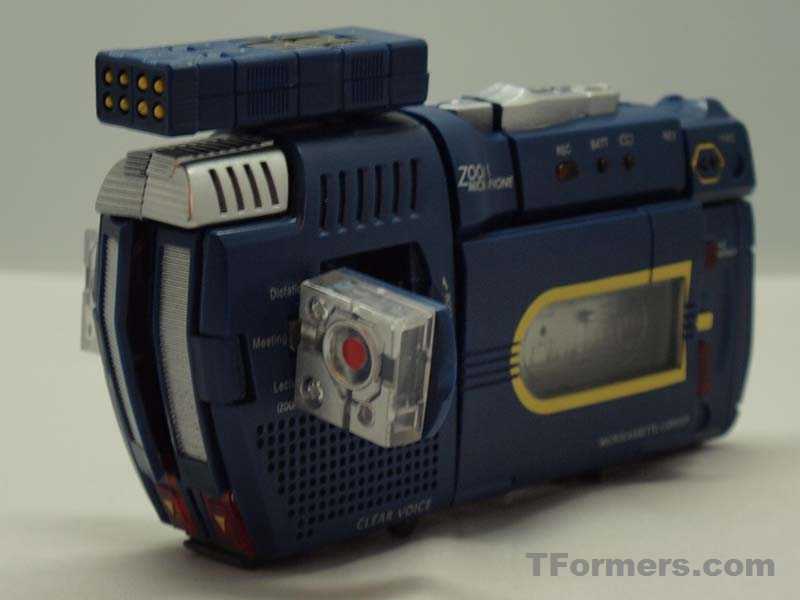 By flipping out the speakers and attaching the multi-warhead missile launcher, you can create a rather convincing mini-sub. OK, it might be a little bit hokey, but nonetheless it's another mode and it's within the realm of possibility.

Alt Mode Summary:A little rough around the edges, but realistic.

Being that this is a limited run adult collector's figure, it's without saying that this figure is fragile. Care must be taken when transforming the figure from one mode to the other. Areas to be particularly concerned about are the hips, the long folding waist joint and the shoulders. The trap doors for the hands and head are pretty hard to open, so you might need a thin, solid object to give them a hand. The shin joints that hide the feet are easy to pop off, so watch for that as well.

BBTS.com currently stock Sonicron at $59.99. While it's a very nice looking product, some might complain about the looseness of the joints or the sloppy connection points in alt mode. Keep in mind that this is a small-scale production and it's likely being done with little profit margin. A novice collector or kitbasher will know how to tighten things up and remove what is perhaps the only major problem with this figure: it's looseness. Hey, it's not like G1 Soundwave is the tightest figure on earth, right?

TFormers.com wishes to thank Joel at BBTS.com for supplying us with a Sonicron figure to evaluate!