How fair would it be if Megatron got a Cyberverse figure but Optimus did not? Well, that just can't happen. What's more, Optimus Prime comes with his trailer, just like Megatron does. It's the first Movieverse Prime with a trailer, which is sure to please fans. just how well does the trailer and it's multiple modes work?

Optimus Prime turns to his Armored Weapons Platform when his energon blades can't quite cut it. The strike base is equipped with weapons far more powerful than the handheld variety he usually wields. The Armored Weapons Platform also converts to a mechanical exosuit if mobility enhancement is required. Decepticon foes beware - Optimus Prime has become even more powerful! 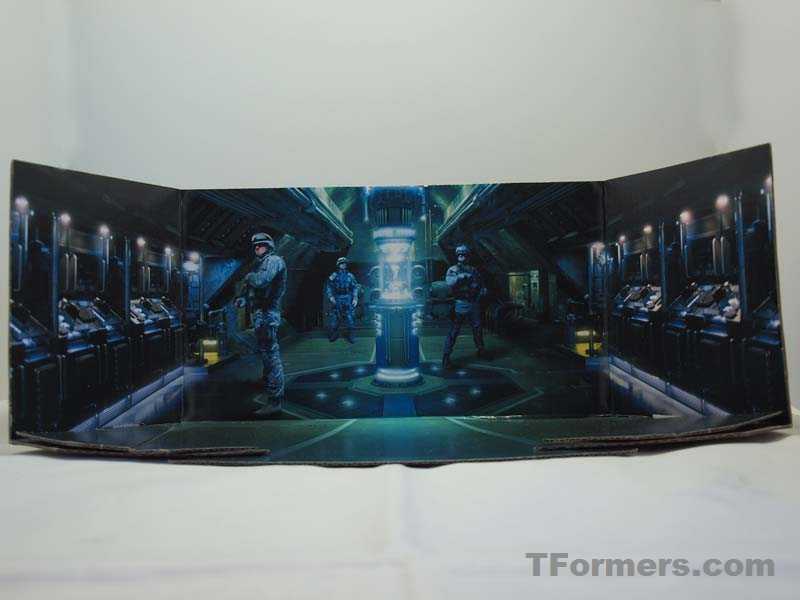 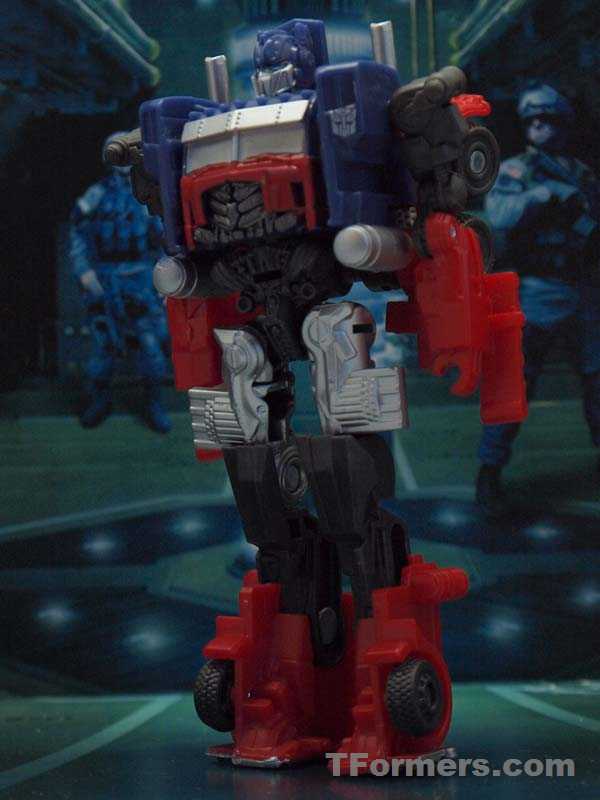 Optimus is the same Commander class figure that was part of the preview package. The colors are a bit more straightforward this time around. 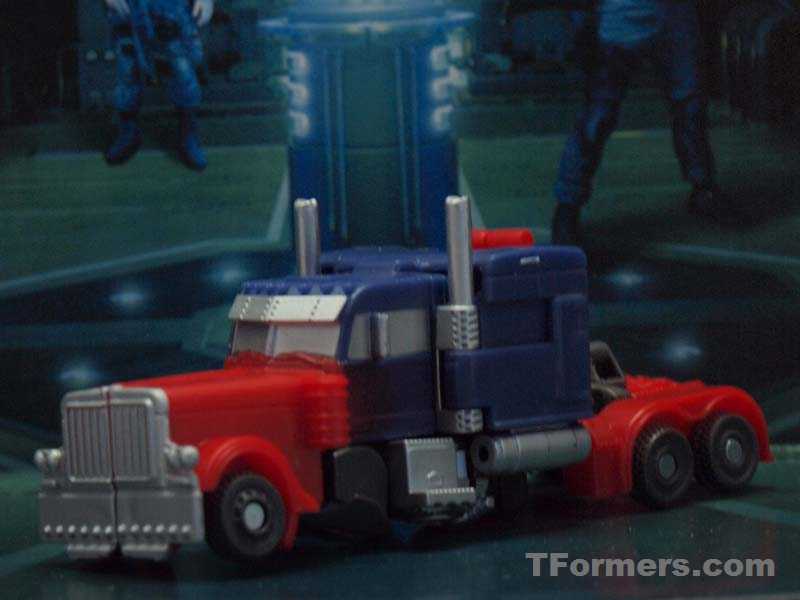 The solid coloration is much more appearant in Alt mode. The flame job is completely absent. A transitional wash between the red and the blue starts at the cab doors. 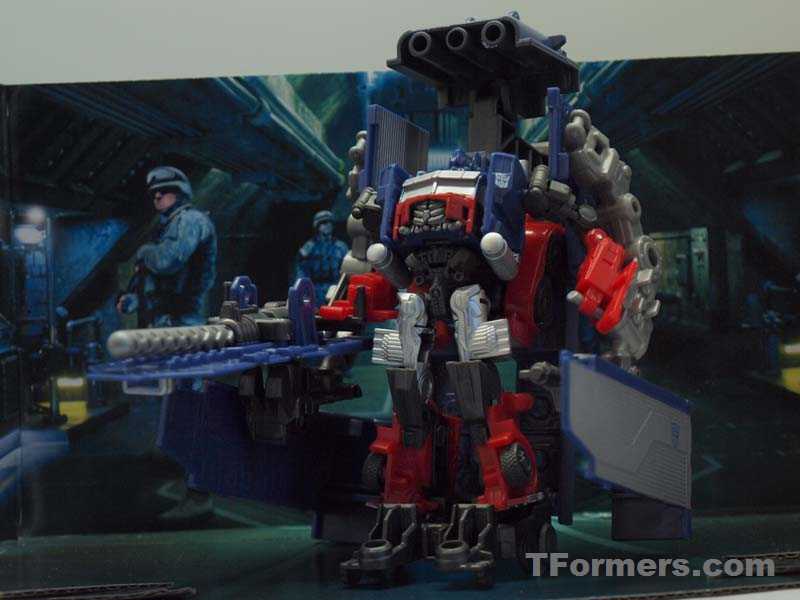 I must stress that you need to be EXTREMELy careful when transforming the platform. The ball joints attached to the arms are fragile and can easily snap! 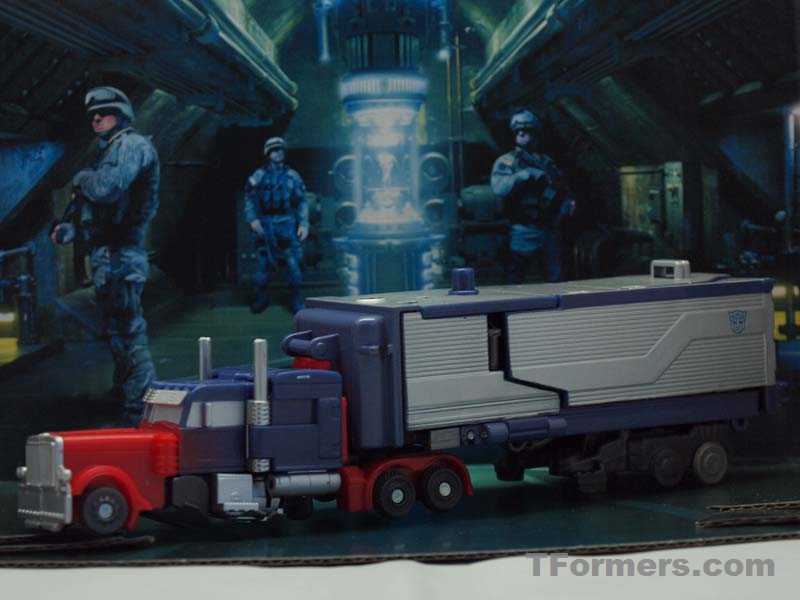 We finally get a Prime with a trailer and it's a Scout.. ahem... Commander. The trailer staps to the rear of Optimus' cab via a tab. Only the rearmost wheels move on the trailer, as the two ahead of it are molded. Even then, the rear wheels are pretty thin and on a common axle.

Transformation (to Battle Base Mode)

Basically, the trailer sides flip down then spread out. Then the rear wheels flip around to form a ramp. Again, be careful of those ball joints! 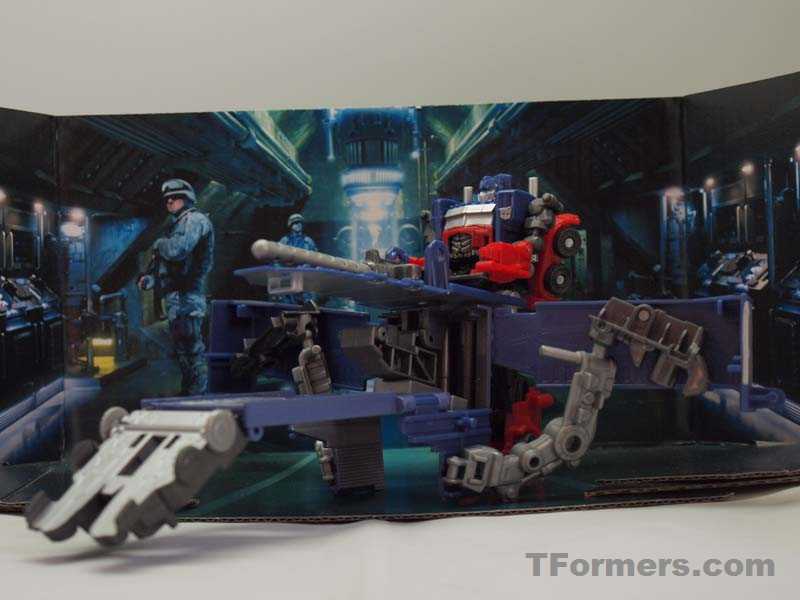 This mode is reminiscent of his G1 trailer in a way. There's a ramp to park a Legends class vehicle within the base. The top of the trailer forms the missile launcher, which plugs into a port on the cooler. Since it's on a peg, the launcher can rotate about.

This is definitely not a kid's toy. It is extremely fragile and will break if any force is used. I've already had to exchange this figure once due to a snapped ball joint.

If you leave it in trailer or battle base mode, there's a lot to like. However, I found the platform mode lacking. It reminded me of the Powersuits used in Gobots, although with slightly more usability. Then there's the durability issue. It's like an egg with a very thin shell. if you plan to display it, you should be OK. If you plan to fiddle with it alot, prepare for breakage.