Many fans have asked for an Autobot or Decepticon ship to come out with a series line. After all, there are some pretty wicked designs out there. After 27yrs, a ship has finally been released that lets fans interact their figures with. The Autobot Ark is the ship that crash-landed on the moon, and it features it's pilot Roller as a bonus.

Autobot Roller is the pilot of the mighty starship that at one time was the flagship of the Autobot fleet. Together they protect the vast expanse of outer space from the Decepticon threat 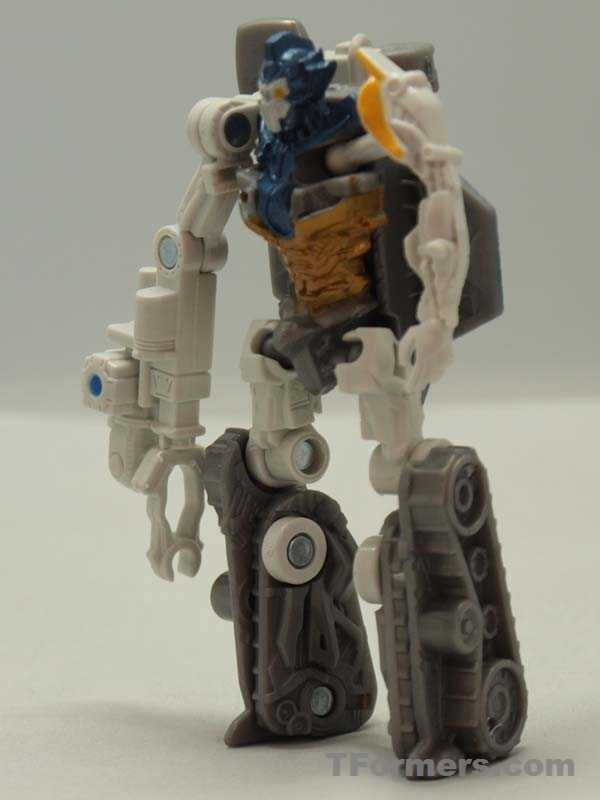 Roller is slightly larger than a Legend (or is that Legion) class figure. His right arm has a claw and the probe array, with his left arm being humaniod. Legs are fully jointed with knees and hips, but the arms only have shoulder movement. 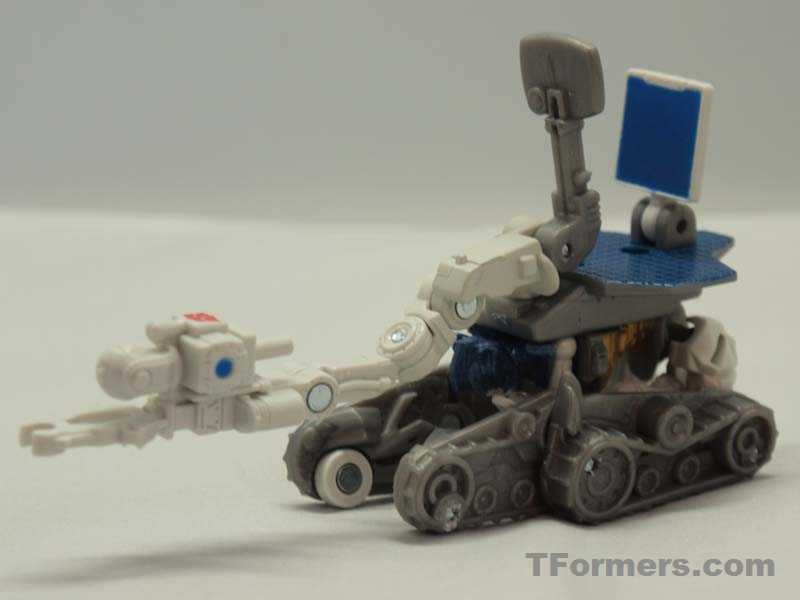 His alt mode is a lunar vehicle. A solar panel flips out for energy collection, as well as a satellite dish. The probe boom can be rotated and articulated at it's center joint. Not too bad of a figure as a pack-in. 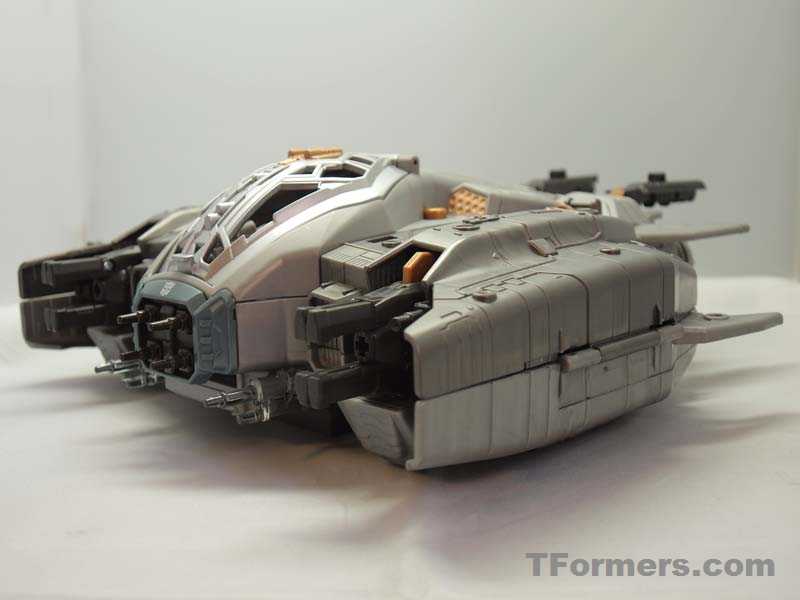 The Ark is a pretty sizeable ship. There's several molded guns that can be found in front, out back and underneath the ship. However, you might have to look hard as some aren't detailed. The front section of the ship opens up as a cockpit where you can store Roller in robot mode. Legion class figures will also fit, but Commander class figures will have to be shoehorned in. As you seat the figure, you'll get some sound effects as though the ship is taking off and cruising. The 'cruise' effect will eventually stop after about 30 seconds. 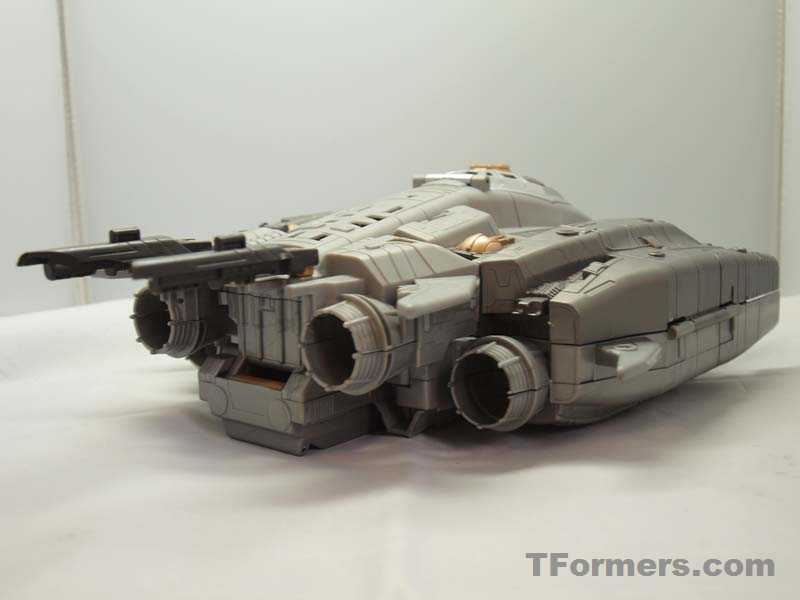 There is another sound effect as well. Pressing a bronze button to the left of the cockpit will encite a gunfire sound as well as blinking lights on the clear guns just below the cockpit. You should be aware that the Ark does NOT come packed with batteries. Instead, you will have to supply your own pair of AA batteries. The battery pack is easily accessible on the belly of the ship. There are a pair of missiles that can be armed on the front of the Ark. The right missile is static, while the left one is launchable. As seems to be a fad with DOTM figures, the lack of paint apps is the biggest sore point. 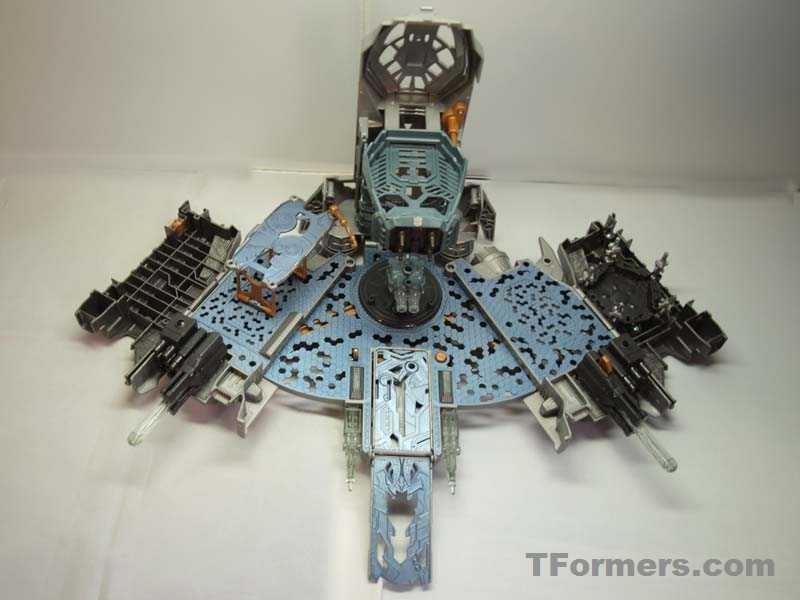 The base mode actually consists of three different sections. We'll look at each section separately. 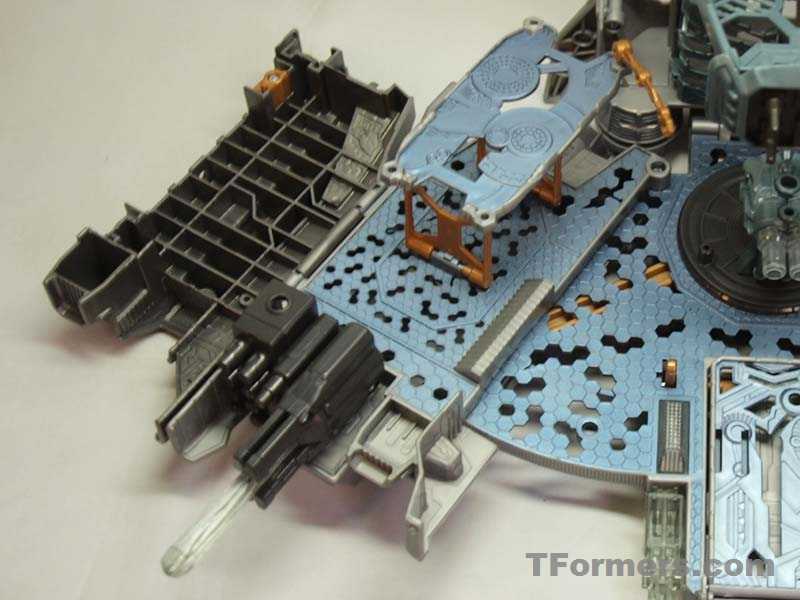 The right side of the ship forms the base's repair bay. There is an elevated bed that you can lay a Legion class figure on for repairs. The bed also has an attachable robotic arm. This arm can be found with the missiles in a secret compartment underneath where Roller is packed in. The arm can be mounted in any corner, but it's a tight fit. The bay also features a static missile. 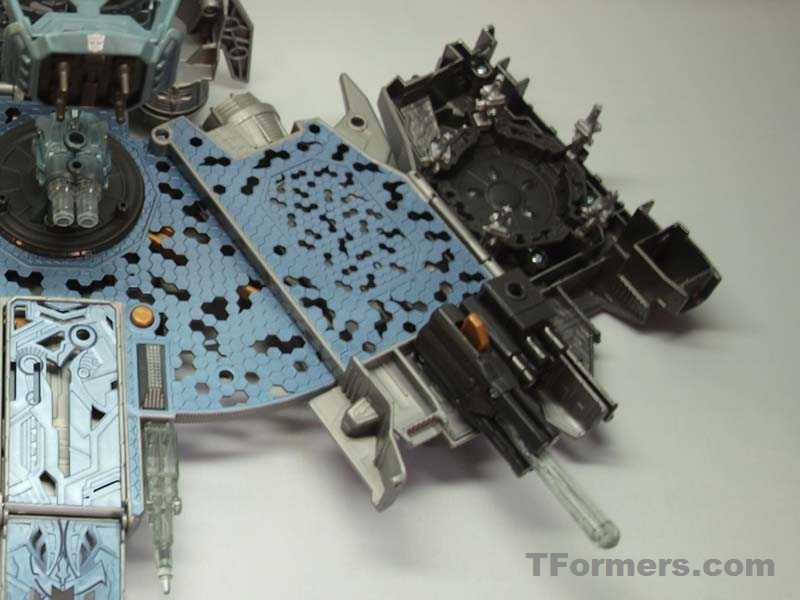 The left side of the ship forms the base's pillar storage area. There are 5 pillars total that flip up. There is just enough space for Commander class Sentinel to fit in and do his work with the pillars. To the right is a launchable missile. 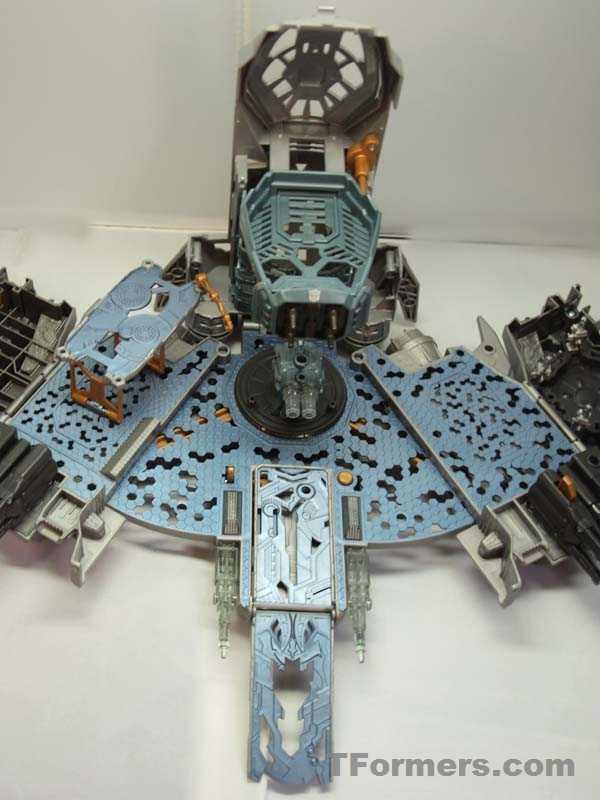 The center of the ship is the command center. There is a double barreled gun in the center of the floor that lights up and makes firing sounds when pressing the bronze button ahead and to the left of it. There are also ports where you can plug in various MechTech weapons.

On the very front is a launching ramp. Pressing forward on the bronze lever in front of it creates two actions. First, the clear guns up front will blink. Second, you'll get a charging sound that will loop for as long as you hold the lever forward. Pulling the lever back will 'launch' the vehicle on the ramp and 'fire' the front guns. 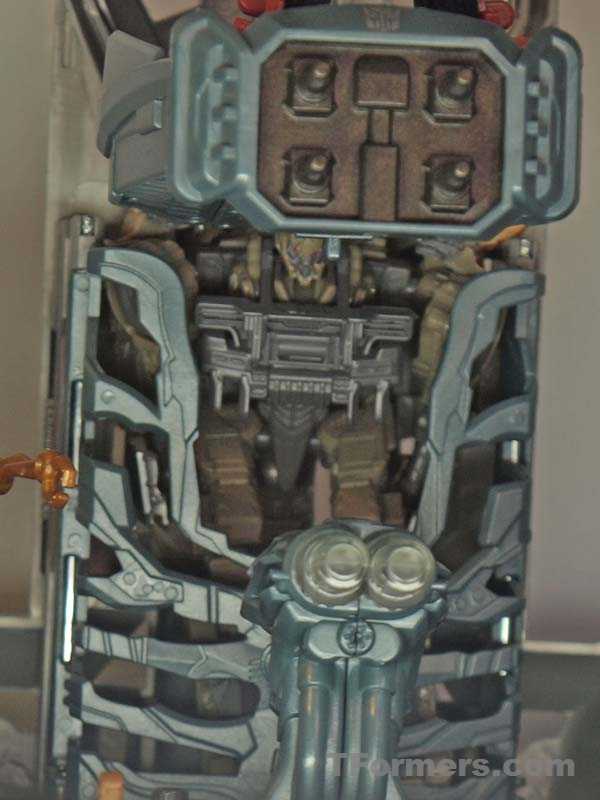 The back of the command center features a balcony where you can stand one or two figures to 'survey the scene'. Below the balcony is a spring loaded holding cell where you can store captured Decepticons. Just note that, as with the cockpit in ship mode, the holding cell is a bit cramped for Commander class figures.

Overall, the ship/base feels pretty solid. However, the plastic used feels a bit cheap. The robotic arm by far is the most likely item to get lost over time, followed by the missiles. The electronics aren't prone to self-activating by themselves, but you will want to remove the batteries if you store the item.

Hasbro is going all out to promote their Cyberverse world. The Ark is a great addition to this line and gives fans a meaningful background to have their legion/legend class figures interact with. That said, it's not for everyone. Those who don't care about Cyberverse may find interest in having a ship, but it's a rather expensive ship to have if you don't plan to activate the base.